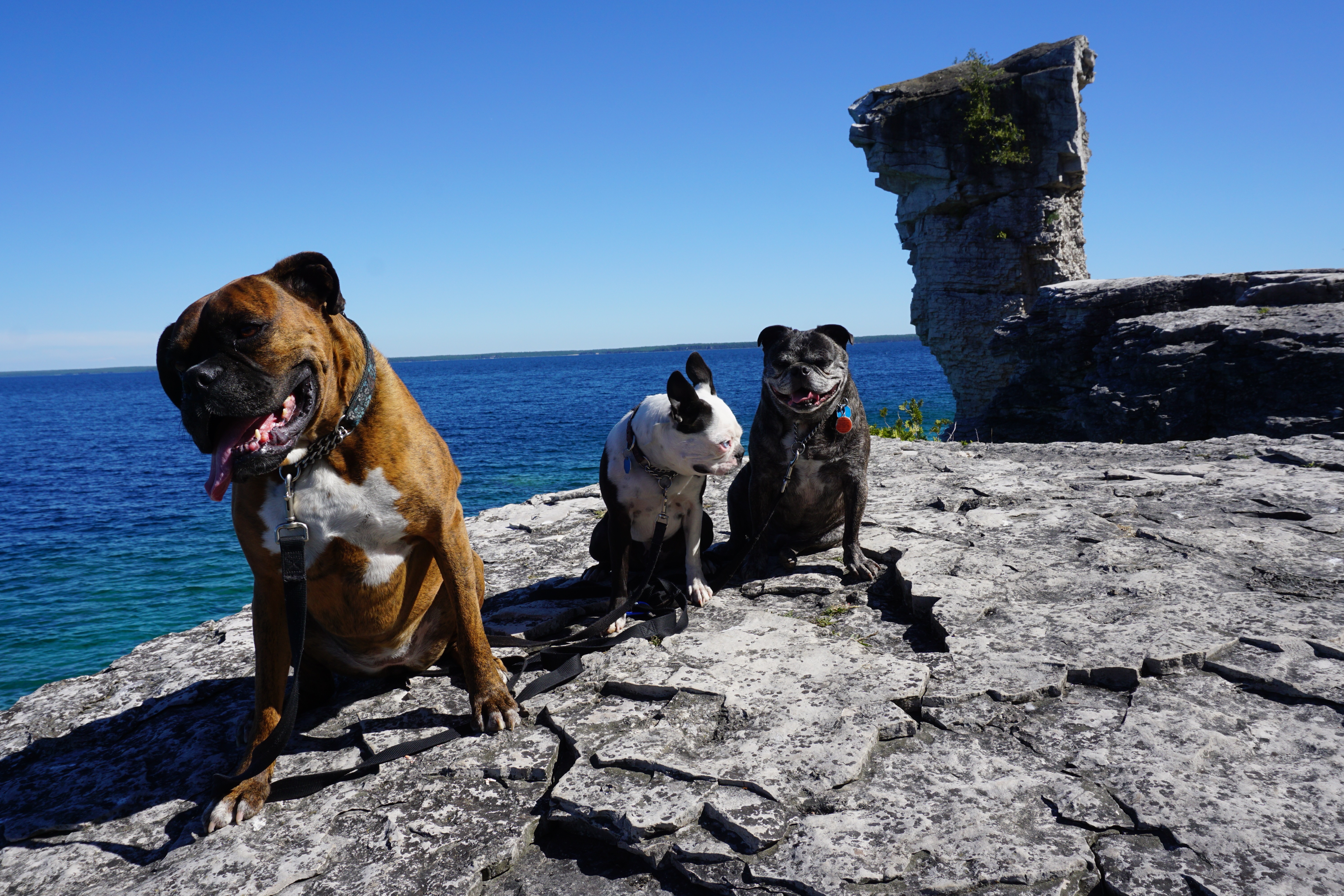 Well I didn’t intend for it to be a Canada Day trip.  One of the downsides of shift work is that I often lose track of time.  I mean, I’m not the best at it to begin with as most of my friends or family will attest, but throw in weird hours and I’m a mess.  All I think about is that I finish work on one day and don’t have to be back until another day.

I had been thinking about making a trip somewhere and after rambling off a few destinations to my friend Liz, she handed me a book of 100 Nature Hot Spots in Ontario.  Now let me tell you: Ontario is HUGE.  It easily takes more than a day to go from the east border to the west border.  In fact, I’m not sure how long that would take.  It takes me almost 20 hours of driving from my house in the south-central area to the west border with Manitoba.  She flipped through the pages and there on page 182 was Flower Pot Island in Tobermory on Georgian Bay.  Done. It did briefly cross my mind that it was a long weekend but no big deal.  It’s a four hour drive and I could always come back home if need be.

I finished work early the morning of June 30 and by the time I fell into bed, dawn was not  far away.  I slept for a couple of hours before I woke up and packed the car.  I keep most of my gear ready to go so packing is actually quite quick.  I didn’t pack lots of food and almost didn’t bring my tent because I half expected to be back home that night.  I did pack my little cooler, just in case, and left home just after 8:30 am.  I was feeling a little anxious as I usually like to get on the road early until I realized that I wasn’t going anywhere near major roadways and would not have to face the crazy traffic that plagues major urban centres.

Of course the Standard Road Trip Rules would apply.  I took a break from my usual choice of road trip bottle since this would be a very short trip, by my standards anyway, and brought a bottle of Cotton Candy Rose.

Having never been to Tobermory before, I was not quite sure what to expect.  I just typed in the destination into my phone and picked the quickest route.  The map took us through farm lands and rolling hills which gradually gave way to long stretches of thick trees.  I drove into Bruce Peninsula National Park which is just outside Tobermory to ask if there were any campsites available.  As I expected, there were none.  However, the wonderful staff there gave me some brochures and the number for the Chamber of Commerce in an attempt to find a place to stay.

One of the brochures they gave me was for Blue Heron Cruises and it says right on the back that there is a pet policy in regards to their cruises to Flower Pot Island.  I called and was able to get a spot on the jet boat at 3:45 pm and there was only one spot left for the return at 5:45 pm.  Now initially I booked for the following day which would give me more time on the island but after some frantic calls and no accommodation, I was able to book for later that day.  The young woman on the line was so incredibly patient with me as I was on the phone trying to make plans while walking with the dogs.

Less than four hours after leaving home, we drove into Tobermory.  It’s a small town with a very tourist and hip vibe to it.  I picked up my tickets for the cruise, got a recommendation for dinner, and walked the dogs around the harbour.  They had no problem with the activity around them and when it was time to board the boat, they climbed up like champions.  Jack jumped up on the seat next to me to sun himself as Piper sprawled out on the deck and Leo watched everything around him.  The cruise out to the island also had a short tour with it and we passed by lighthouses and even over two sunken ships that you could see from the surface.  The water was so clear that it looked like you could reach in and touch them.  I was impressed with how well the captain was able to spin the boat around in a tiny harbour to put us in position to see them.

A short trip over open water and we docked at the island.  The entire loop trail is supposed to be six kilometres and with just over an hour decided to stick to the shoreline and leave the trail through the interior.  The trails are very easy to walk as evidenced by the people I saw in flip flops and heels.  The only difficult spots were off the main trail as there were plenty of spots for photos and scenic places to enjoy.  I was actually flabbergasted by the sheer numbers of people walking through there.  Some were not impressed by the dogs and a few actually squealed and tried to climb up the rock walls to get away from them.  Of course the dogs didn’t help because they thought it was a game of chase.  Oh well.

We hiked to both the Little and Big Flower Pots which were carved from the rock by receding glaciers and the waters of Lake Huron.  The beaches are made up entirely of what almost seems like paving stones because there are piles of thick slabs of rock.  It’s very different from what I am used to.  Even the rockiest beaches that we have been on have had the rocks smoothed by the waves.  It made for slow and unsteady walking.  It was also fun climbing up almost sheer cliffs because there were plenty of hand-and footholds.  The dogs just switched to four wheel drive mode and powered up.  I was a little worried about Piper at first since she still was having some problems with her balance but she did not put a single foot wrong and was having fun playing in the water and climbing the rocks.

On the way back, there was a sign for a cave.  I thought it sounded fun so we climbed up the stairs to find ourselves in a hollow space in the rock and not the deep hole that I had expected.  It was almost time to leave anyway so we hustled back to the dock.  The ride to the mainland was much more crowded than the ride over but at least it was an express so we weren’t on the boat for long.

Back on solid ground and I was feeling a bit peckish.  There were several restaurants and stores but one in particular had caught my eye earlier so we walked over to The Sweet Shop.  After all the hiking, I needed to refuel of course.  Which I did with a Heath Bar Ice Cream.  It had everything a girl could ask for: vanilla ice cream, chocolate, skor pieces.  It would tide me over until I got some real food.

Most of the places I passed by in town were packed and with three dogs I decided to move on.  Besides, I had been told that I had to eat the fish and chips at Lone Wolf outside of town.  As I was driving there, I saw flags for camping and I quickly turned in to Harmony Acres Campground.  And they had tent sites available!

Things were looking up for me as I continued to Lone Wolf.  Until I got there and learned that they had closed.  Quickly turning to Yelp, I found a highly recommended restaurant back the way I had come.  So I drive back, passing Harmony Acres to go to Ancient Cedars Cafe.  It is part of the golf course so I almost missed it.  The best part was that I could take the dogs onto the patio with me.

I ordered the burger bar which was a burger and a buffet of sides.  I think they were getting ready to shut it down because the potato wedges were cool and the pasta salad had been sitting out for a while but after the busy day we had, it all tasted good.  And the burger was good all on it’s own.

We went back to the campground and I have to say that it was one of the nicer private places I had been in.  The section that my site was in was fairly new and the sites were fairly spacious.  I even had one of my neighbours invite me to join them at their fire.  And I would have except that after setting up camp and walking the dogs to stretch our legs and get familiar with the site, I actually fell asleep while I was sitting at the picnic table waiting for them to eat their food.  And not over the table part; I was sitting facing out so I woke up when my elbows slipped off my thighs.  I was just able to climb into the tent and was asleep in no time.  And the dogs were still snoring before me.