I am going to take a break from recounting our past adventures to tell of a more recent one, an adventure more in line with what this blog (and the associated Instagram, Facebook, Twitter accounts) are all about.

I had heard of a “barkery” just over an hour away in Hamilton.  A place where one can enjoy a cup of coffee and a snack for you and your dog!!!!  How could I not go?

So after looking at the weather reports, I decided to make the trek on Monday February 1, 2016.  I even checked the website to make sure it would be open.

That morning we hit the road.  Well, we stopped for a hike in a nearby forest and then we hit the road.  Traffic was relatively light which was good because the drive across the bottom end of Toronto can be so dreary.

Soon enough we left the highway and made our way into the parking lot.  My eyes brushed over the line of signs until it focused on one and we navigated our way past the moving cars.  As we got closer, I had a sinking feeling in my chest.  It wasn’t anything I could say for sure, but there was something bothering me.  I joked to the dogs “Wouldn’t it be funny if it were closed?”

I parked my car directly in front of the storefront.  The store was in darkness.  A brightly-coloured piece of paper was taped to the door.  Closed.  For a special event.  I stood there in front of the door and peeked inside, hoping to catch a glimpse of what may have been.  Nothing. 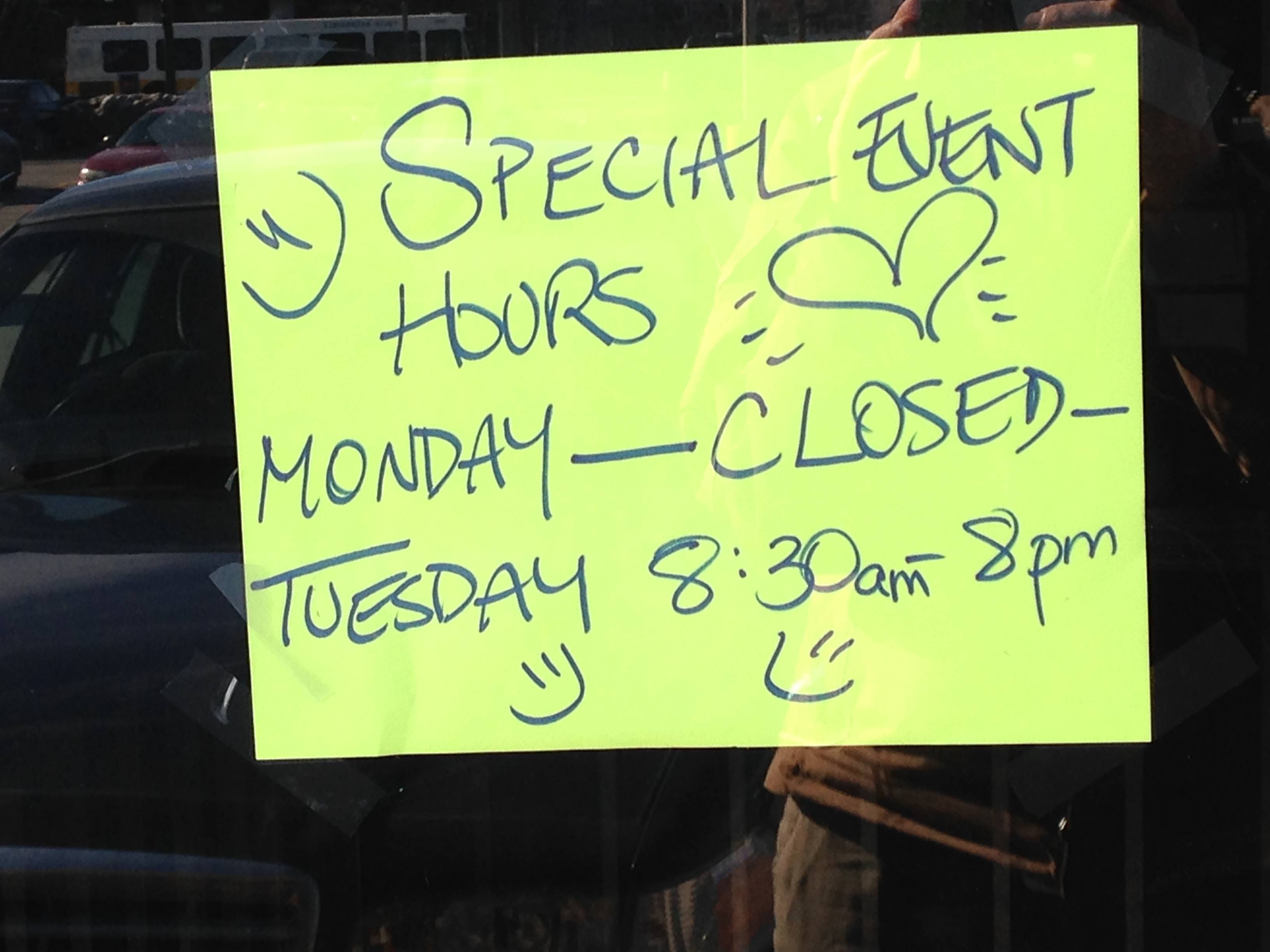 So we drove back toward the highway and I saw a sign for a conservation area.  Great.  Plan B.  Take the dogs for a walk while I figure out what to do next.  When I drove up to the gate I saw that it would cost $15.00 to get in.  I promptly did a U-turn and went back towards the highway, stopping in a plaza since there’s no point in driving around aimlessly.

I took the dogs for a walk around the block to stretch their legs then pop into the 50 Point Market.  I needed a snack.  I bought the pulled pork sandwich for lunch and a small piece of sausage for the dogs.  The sandwich was…mediocre.  I wanted it to be good.  I really did. The flavour in the pork was lacking to the point where I tasted the bun most of all.  I shared the sausage with the dogs as I looked up dog parks.

A highly rated park in Niagara Falls caught my eye.  Close to The Falls which is a place I wanted to stop anyway.  Perfect.  Back in the car and onward we go.  My GPS soon had us in Niagara Falls and we were getting closer to the Fireman Dog Park.  And then drove right by a vacant lot.  Apparently it didn’t exist anymore.

So I did the only thing I could do.  We went to see The Falls themselves.  After parking the car, we walked down along the gorge and back.  The weather was fantastic and with next to no crowds we had a wonderful stroll.  Lots of posing for photos too, for the dogs and people walking by who wanted to get pictures with them.  Jack has developed quite the sense for when to strike a pose and seems to know when he looks good.  I just have to keep the camera steady.

After we had wandered for a couple of hours we jumped back in the car and drove to nearby Niagara on the Lake.  I was originally going to drive straight through but then decided to stop. The window of Il Gelato Di Carlotta called to me and I stopped for a latte and salted caramel macaron.  It was one of the best macaron I have had in a long time.

We crossed to the other side of the street to go back to the car and came upon a Rocky Mountain Chocolate shop.  Of course I had to go inside.  When I mentioned that I had some friends waiting for me outside, the woman at the counter asked if they could have a treat.  Today was lucky for us in one way: they don’t always have the cookies with dog-safe confectionary coating.  So along with a few little treats for me (namely ice wine bombs and chocolate bacon clusters), the dogs were able to get something too.  I think they were happy.

After stopping at The Ice House for a bottle of Vidal ice wine, we made our way home.  The drive was uneventful with the soft sound of snoring drifting from the back seat.  They didn’t seem to mind not getting to the “barkery”.  I guess it just gives us another excuse to try again.  Maybe after a phone call first…

1 response to "An Unintended Trip to Niagara Falls"