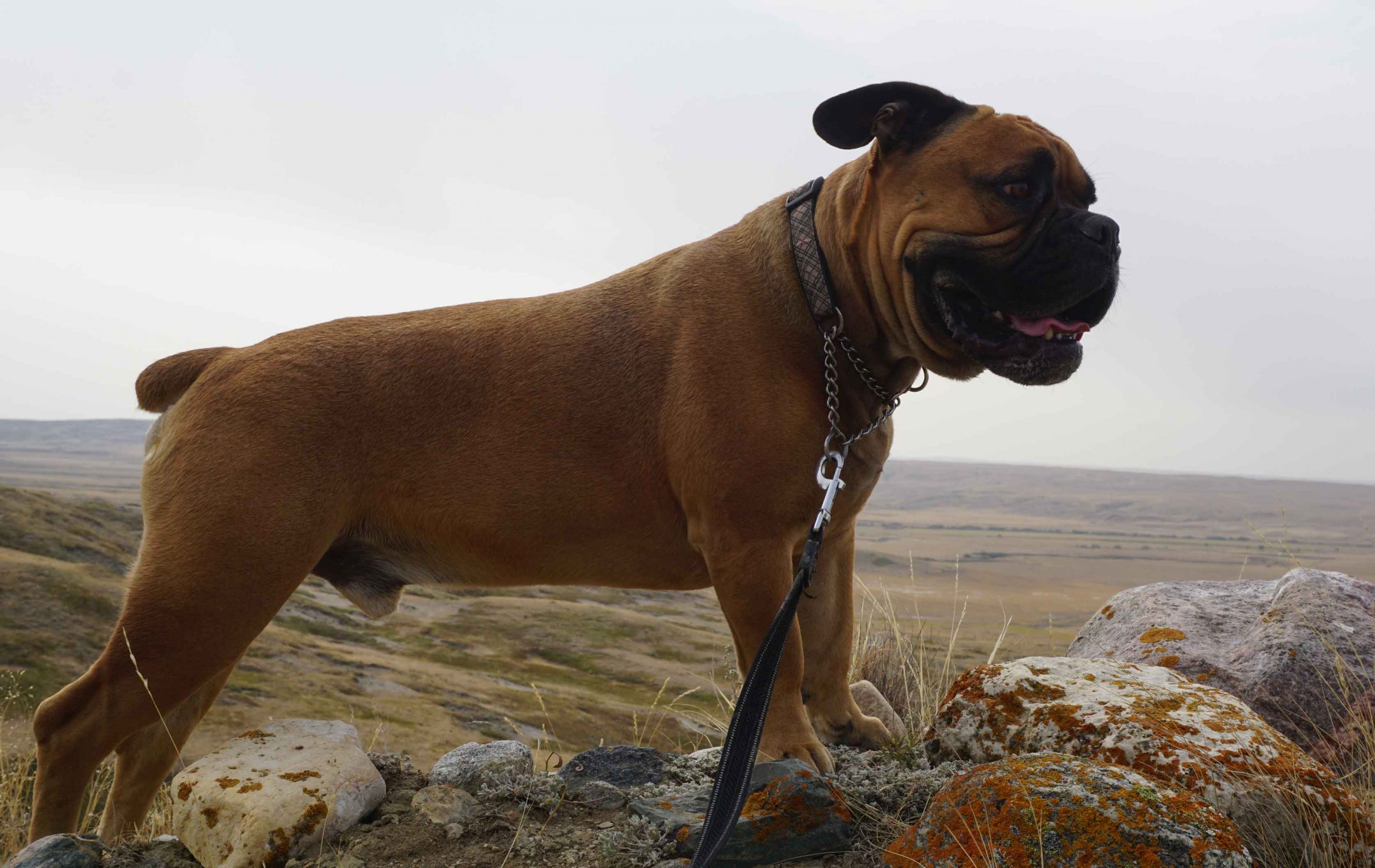 January 27 is a big day for the AdventureDawgs house: it’s King’s second Gotcha Day.  That’s right.  Two years ago I brought this meathead home and it has been a wild ride ever since.  He lost his balls…errrrr I mean he was neutered, developed dog-aggression protecting his pack, stared into a bean, camped on the east coast where he developed a taste for lobster, shared a brain sandwich, splashed in Lake Superior, has thrown so many temper tantrums, and yelled at bison in Saskatchewan.

Normally I don’t really care about birthdays and gotcha days. Heck sometimes the only reason I know my birthday is coming up is because I get a card from my grandma. But with the adventures subdued this year (we’re currently under a stay at home order in Ontario) it gives plenty of time for retrospection so it got me to thinking about the big man.

It hasn’t always been easy.  In fact, there were days that I wondered what I was thinking bringing him home.  Where Jack and Leo were practically perfect from the minute they walked in the door and I raised Piper from a pup, King has easily been the most challenging dog I have ever had.  Maybe it makes me love him more because of it.  It’s easy to forget how far he’s come but when even my miserable neighbour down the road stops and comments how well he’s turned out, it makes me realize that he’s still a wonderful work in progress.

To celebrate the day, here are some of my favourite photos and videos from the past two years.  I hope you enjoy this look back as much as I do. You can read about how he came to live with us here and how this whole crazy adventure started. There’s also some tips about introducing a new dog to an existing pack that helped make the transition smoother.

It’s amazing to see how well King and Leo get along. Even though Leo is a third of King’s size (Leo is 25 lbs and King is 80 lbs), he will literally hang off King’s face and King LOVES it. When they play tug, King will let Leo pull him around as part of the game. There is even a track worn in my backyard from Leo chasing King around. When Leo had surgery to remove an eye, King did not leave his side until the cone came off. Even though Leo is almost nine, he’s insanely healthy and shows no signs of slowing down or letting the puppy of the pack push him around which means no shortage of dog shenanigans in this house.

King is oddly intuitive whenever anyone, human or animal, is not feeling well. When one of my cats started having seizures, he would run to her. At first I thought he was going to bite her until I realized he was putting his head on top of her to stop her from flailing. He would then lay down next to her until she recovered enough to walk away. I often joke that if he starts paying too much attention to me, I’m going straight to the doctor. I can just imagine that conversation:

There’s something wrong with me. The dog says so.

“No really why are you here? What are your symptoms?”

I don’t know. King says something is wrong with me so warm up the stethoscope, fire up the MRI, and draw all the blood you need.

While he is still having issues with other dogs, there are some that he has become friends with and they will actually play. If he starts to get too rough, I call him off and he stops. It almost brings me to tears to see it. There was one time when we were at our local brewery visiting with a friend. Another dog came to the beer garden and at first King was reactive and barking but after a few minutes, he grew tired of yelling at the other dog and climbed up on my lap to put his head on my shoulder. That’s right: my 80 lb bulldog climbed into my lap since he couldn’t bark at another dog. Yes it was ridiculous but he needed that comfort so he got it.

Once I realized that his reactivity was out of fear and insecurity, it really helped me to help him. I think he has a canine version of hyper vigilance (almost PTSD) and as someone who has experienced the same thing, I can appreciate how stressful that can be for him. Exposing him to all kinds of different places and situations has mostly been a positive experience and he loves being around people. Sometimes he loves them too much because he falls back into his old humping habits but I know when he’s about to try it and usually catch him before he does. Now when he wants attention, he asks for it by sitting in front of the person which is great; except when I’m trying to make food or clean because then I get distracted.

Jack and Leo were old pros when it came to camping so they were good role models for the new guy but he took to the whole experience as though he had been born in the wilderness. I had worried that he would try to dig out of the tent but the only time he does anything to the walls, it’s to try to get into the tent when he thinks it’s his bed time.

King may not be a good swimmer but that won’t stop him from wanting to get in the water. There’s a stream near our house and in the summer time we’ll walk down the river and then turn around and walk back up. If we have to turn around before he’s ready, he is sure to let me know how he feels about it. And when I say we walk down the river, I’m not talking about the bank: we are in the water the entire time. King has gotten really good at reading the river and how to get around obstacles. Because he has to stay on his long line, he’s learned to listen to me so he doesn’t get tangled up in debris or will follow hand gestures if he’s not sure where to go.

King loves the snow, especially eating it. He can scoop up a mouthful in mid-stride without a pause. Maybe it’s like a slushy for him.

I tried to take portrait photos of each of the dogs separately but there was no way that King was going to let me take photos of Leo by himself. He promptly sat himself down next to Leo and waited for his picture to be taken.

Even though he’s only three, he’s mellowed out quite a lot over the past few months and he’s been super snuggly with me. I’m not complaining about it.

Grasslands National Park is one of my favourite parks and we were able to visit September 2020. The dogs took to the difficult hiking conditions with no complaint and were ready to set out on the trail at every opportunity.

I think King’s favourite place in the park, other than the tent of course, was the trail behind the campground. It was a simple trail mowed in the grass that led to a set of red chairs where you could sit and look over the valley below. While Leo rolled in the dirt, King would watch the valley because there was always something roaming around. His eyesight is incredible and he would spot the animals before I did.

If I told every story and shared every photo, this post would be long enough to turn into a book. He has got such a personality and when he’s with Leo, the laughs never stop. Thank you for joining us on this look back at the past two years and here’s hoping for many more.