After a wonderfully restful sleep, we were up early to hit the road.  To be honest, Chad from Palmer Divide Run Co. had me a little concerned about the traffic and what we may find on the mountain so I had wanted to be there as close to opening time as I could. The hotel had a nice breakfast and I loaded up with wafflewiches (waffles smeared with jam and syrup) along with a bunch of little yogurt cups.  I tried the coffee but it was wretched.  Fortunately Kairos Coffee House was a short distance away.  It’s off the beaten path for sure but well worth the visit.  If I’m back in that neck of the woods, I will definitely be stopping there.

We made the drive to Pikes Peak, stopping on the way up to admire a Bigfoot Crossing sign and again at the gift shop.  I just had to get a picture of the dogs with a carved Bigfoot after all.  The staff warned that there was a film crew working on the road so the drive up was a little bit scary with people and cars stationed at several hairpin turns.  And the shoulder?  Non-existent in most places so there was road then drop sheer drops.  Yikes.

Then finally we found ourselves above the treeline and not long after that, in the clouds.  Honestly in the clouds.  I have never been so high in my life.  I checked the temperature and according to my car, it was a mild…5 degrees celsius.  Well was I ever glad that I had pants and several tops on.

There wasn’t much to look at on the top of the mountain itself but the views were amazing and I got a few quick pics of the dogs before I put them back in the car.  They were happy to sniff around but I was worried about the buffeting wind and the effect that the thin air would have on them.  I popped into the visitor centre and, again at Chad’s suggestion, bought the world famous donuts.  Hot and soft…I shared one with the dogs as soon as I got back into the car.  Two donuts didn’t make it out of the lot.  I was feeling a tad bit lightheaded so I figured the food would help.

Then we began the drive back down the mountain.  There were signs that advise to use the lowest gear of the vehicle and I totally understand why.  It would have been very easy to ride the brakes and lose total control.  We did make a couple of short stops to admire the view and have a few leg stretches.  They had so much fun climbing over the rocks and I think Jack is trying to give me a heart attack because he seems to have no fear of heights.  In fact, he will perch himself as close to the edge as I’ll let him and bask in the sun.  Cheeky monkey that he is.  Meanwhile, Piper and Leo tried to poke their noses into every nook and cranny they could find.

We stopped at Catamount Reservoir for another walk to enjoy the amazing colours of the changing aspens…and more donuts.  As a tip, if you go to Pikes Peak and you buy the donuts, eat them as soon as you get them.  They’re great warm off the rack.  They’re OK once they’ve cooled down. 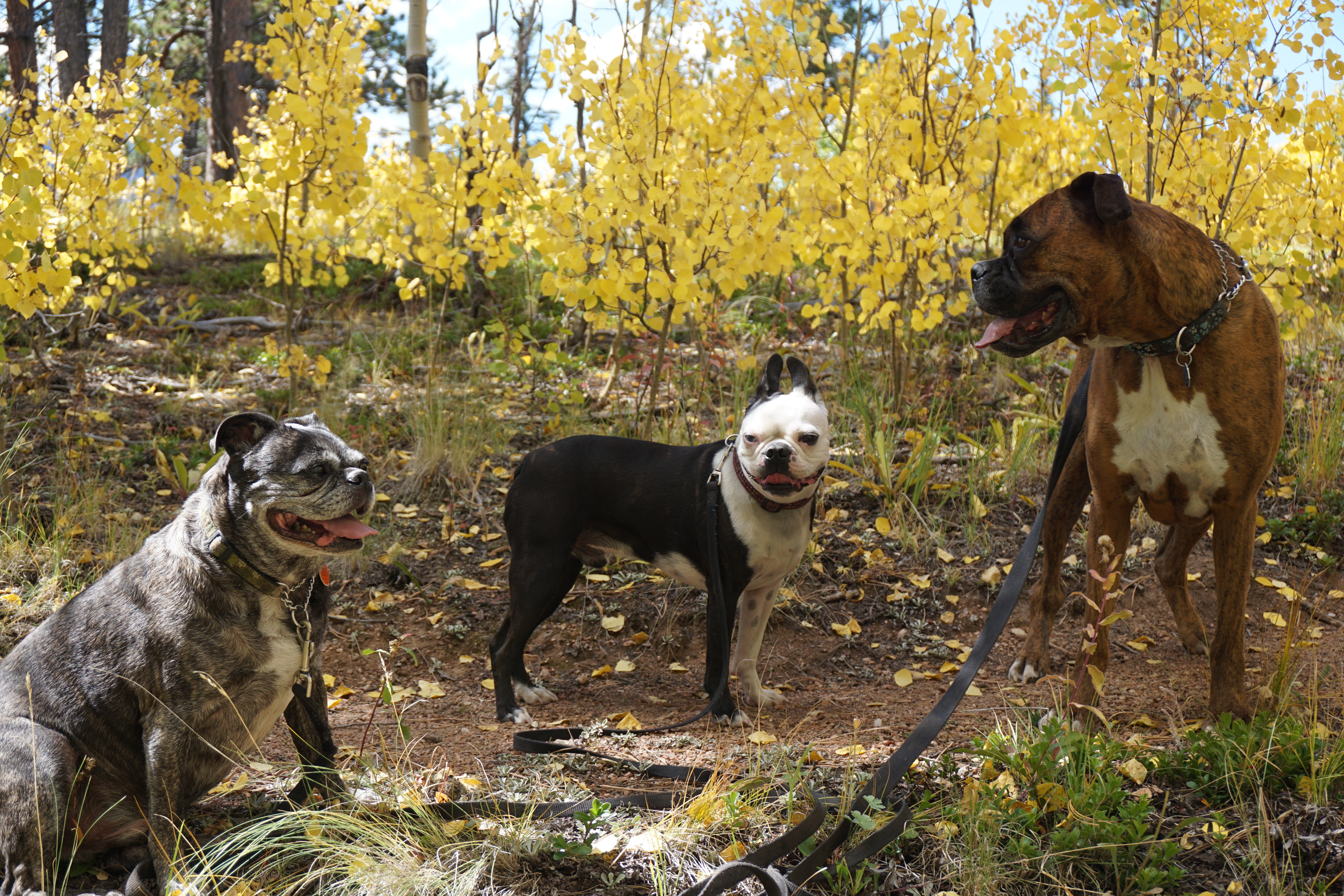 We continued westbound, passing through Lake George and right past the aptly named Lake George Pizza.  I was hungry so I ordered the chicken caesar pizza.  A few slices into my belly and off we went.  Right into wicked bad rain with some hail thrown in for good measure.

I was heading towards Manuso looking for another “Feasting on Asphalt” location, this one being Ted’s Tacos.  I tried to find it but had no luck.  So we ended up going to Cortez and spent the night at Aneth Lodge.  It’s an older motel and the decor is a bit dated but it was very clean and the room was quite spacious.

After a few more slices of pizza, we were off to sleep.