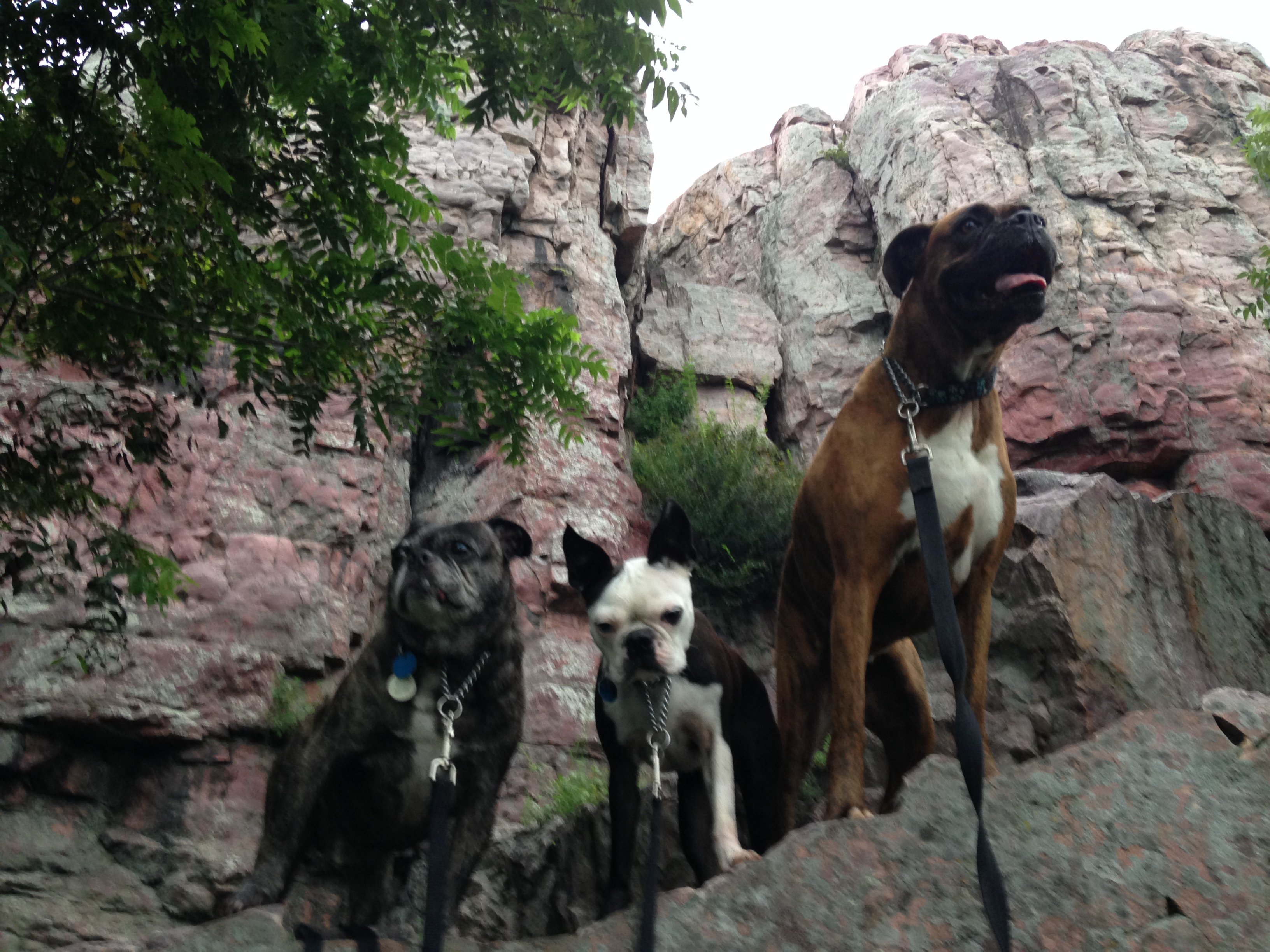 The dogs handled sleeping in the tent surprisingly well. Jack was happily reunited with his blankie girlfriend even though he had figured out how to squeeze himself into the gap between the front and back seats in the car where I kept the blankets. Leo kept trying to climb onto my inflatable sleeping pad. Piper….well she just slept.

I woke up with the sun. I think. It was very overcast but light out. We walked around most of the perimeter of the park. Still no bison but lots and lots of deer. I made a leisurely breakfast as I broke camp and as I was carting everything to the car I looked up and saw the elusive bison. We took another stroll over to have a look then back on the road.

The town before the highway, Luverne, had a small coffee joint so of course I had to stop. It was quite obvious that I didn’t fit in with the women that were there and I beat a hasty retreat.

Then back on the highway and into South Dakota whose state motto should be: “windy as
F%$k”. Even when I was going straight the steering wheel was slightly canted the whole time which made it really fun when driving across a bridge or next to a truck. I watched one pickup with a trailer on the bed driving in front of me and the entire trailer was being displaced a few degrees by the wind.

I stopped at a ramshackle farm that advertised bison for sale and spoke with the gentleman working there. I think he may have actually built the place he was so old but he was one of those rare breed that are so sweet you have to stay as they talk; definitely one of the nicest people I have ever met. I learned all about his children and grandchildren.  He even told me about his plans to move to Canada years ago but he didn’t. We had a nice long chat before I headed back into the wind storm with some bison jerky and pepperettes when some other customers came in.

I soon started seeing signs for Al’s Oasis and famous buffalo burgers. Again, we had to stop. So I ran in and grabbed a buffalo burger for me. And since it would be cruel to eat it in front of the dogs I also got them a patty to share. Spoiled? Absolutely. It says something when I ordered a plain patty and it gets rung through with nary a raised brow.  Seems like I’m not the only one that spoils their dogs.  And I was gently corrected when I ordered a bison burger.  It seems that it’s “bison” in Minnesota but “buffalo” in South Dakota.  We crossed the road and ate our meal next to some statutes that blocked the wind a tiny bit.

A taster’s note: I found the buffalo (or bison) to be drier than beef.  Had I not known what it was, I would not have noticed a difference.  Just something to keep in mind when buffalo is slightly more expensive than beef.

With full tummies we headed back out onto the road and into the wind.

Then we come across the Badlands. I’ve never been before and seeing it on TV is just not the same. One minute prairie then BAM Badlands. I asked at the gate  to the Badlands Park if it was always this windy and the woman said “yes”.  Then she paused and said “well, maybe not this bad”.

We got out for a walk but there were all these signs that said dogs aren’t allowed on the trails. I don’t think they minded too much with the wind.  In fact, Piper did not like it much at all and stayed close to me with her little stump of a tail tucked low.  Leo did not stray far either.  Jack…he was completely content to sit and take it all in.  We did a few little short jaunts out of the car but with the risks of rattlesnakes, they were very short and I kept them on very short leashes.

Now all the way across South Dakota there had been signs for Wall Drugs. Since it was right outside the Badlands I figured I’d check it out. I’m sure some people would love it and do love it. Me…I grabbed an ice cream cone and got the hell out of there. A bit too touristy for me. So back in the car.

And here’s where things go awry. I had planned to camp out again and was still going to even with the high winds. And then it started to rain and the temperature was dropping. Me wet in a cold tent? No problem. Three soaked dogs in a cold tent? No way. So I pushed on trying to find a place to stay. By this time we’re at the edge of South Dakota and cutting across a corner of Wyoming into Montana. The map had me off the interstate and on a smaller highway which would normally be no big deal. Except here there was no internet and no cell signal. And no towns. Ok no biggie I know there would be a town eventually.

And we then  we drove into Broadus (I have no idea how to pronounce that) Montana. We drove by a motel with a vacancy sign and kept going. Between the bikers and the guy in the DJ booth out front it looked like the kind of place that would have Patrick Swayze doing roundhouse kicks all night long. Roadhouse.

Ok I knew there was another park up ahead. The wind had died down and the rain had stopped. Still cold out but the tent stays warm once we all pile in.

By this time it’s night. Full on middle of nowhere night. Now, in my travels through The States I’ve noticed that they aren’t always good with marking their parks. You’ll be driving on the highway and see a sign that says to take the next exit. You take the next exit and there’s nothing else. It’s like they say “there’s a park out there. Now go find it”. To complicate matters, the park signs are often brown with white lettering. Not really hi viz.  Not that the signs are much different in Ontario, it just seems that I’m able to find them easier.

At this point it’s getting close to midnight local time and after 1:00 am our time so I pulled over at the next rest area, release the dogs from their harnesses and after a quick walk outside to stretch our legs, we get back in the car and snooze for a few hours.

The temperature kept dropping and at one point I turned the car back on to get some heat. According to the thermometer it was 3. There’s no missing digits there. It was barely over freezing!

In a moment of weakness while I was waiting for the heat to kick in, I got out the map and booked a hotel room in Spokane Washington for the next night. And that turned out to be an incredibly good decision as I shall explain later.

And that was how Saturday ended: the three of us in the car in a rest stop in Montana.  At least we had plenty of warm blankets and I somehow ended up with Jack squeezed on my lap under the steering wheel.  After Piper tried to sleep on my lap and eventually got off because I was moving too much trying to get comfortable under a 65 lb boxer.