The Rain and the Trail 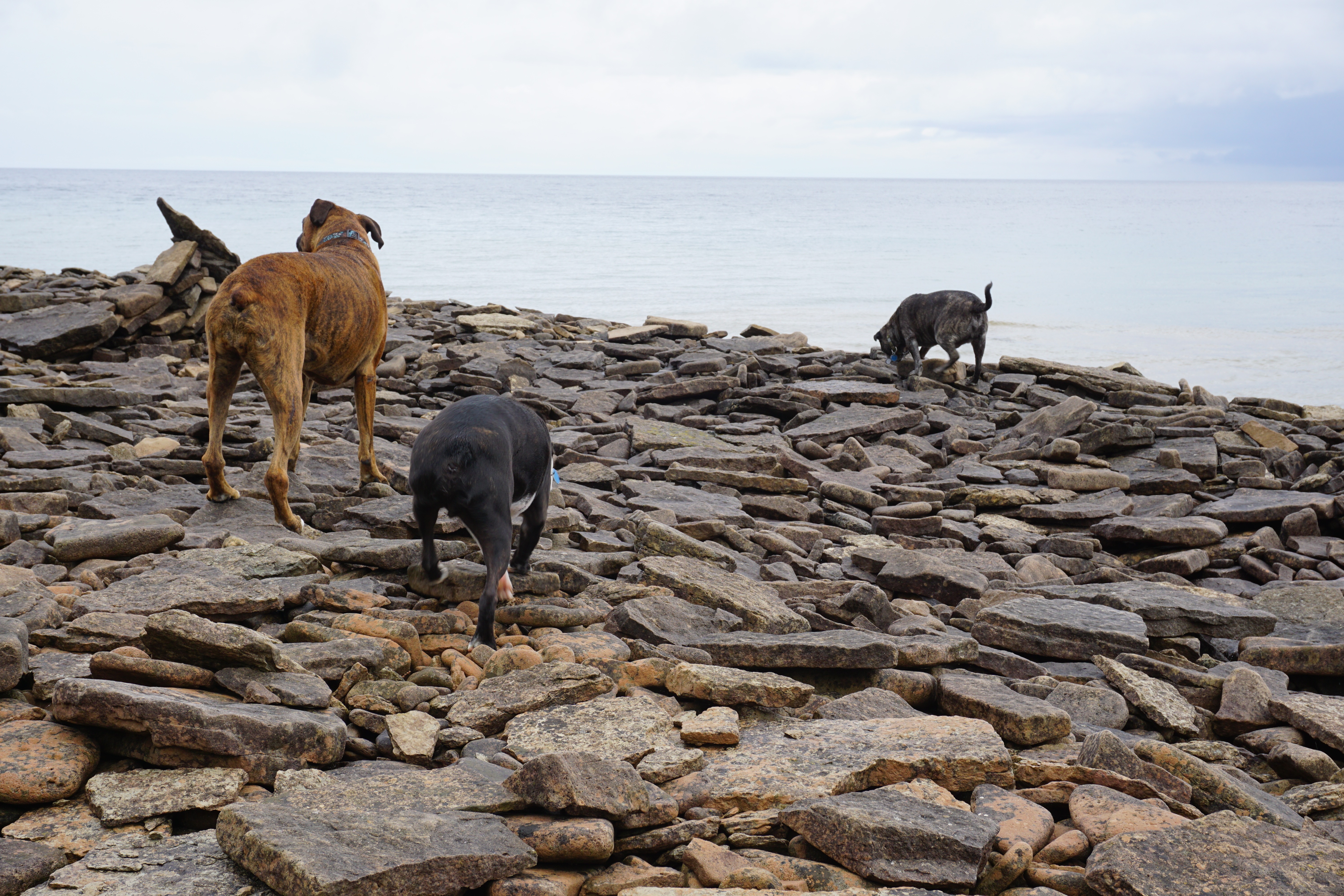 Too bad the day started off the way that it did.  We’ve been lucky with the weather so far and when the forecast calls for rain, we are usually able to get a hotel.  The problem with freestyle road tripping is that is not always an option, especially on a long weekend.  And when I woke up, I heard the patter of rain on the tent.  Fortunately it was a fairly light rain and I was able to pack the tent without getting drenched.  I put the dogs in the car and they seemed content to lounge about and wait for me.  I ended up sleeping quite late so it was only a short wait for Lone Wolf to open by the time we were all loaded.  I was on my way back into Tobermory to get a coffee when I saw Little Tub Bakery.  That will do just fine.  I got a good cup of coffee and bought some strawberry jam, pickled garlic scapes (yummy), and asked if they had anything that they were known for.  I should have expected that they would say the butter tarts.  I ordered a plain and sat outside with the dogs under an awning so they could have their breakfast.  I will say it was a damned fine butter tart, even if the raisins were a bit of a surprise.

And then to Lone Wolf.  It looks like a shed in a parking lot next to a trailer that’s open 24 hours to sell coffee and smokes I’m guessing.  I was there a little early and was staring through the windows at the women working inside, trying to will them to open faster, hoping my puppy dog eyes might garner some sympathy.  It didn’t.  When they finally did open, I ordered the whitefish and chip dinner.  If the closest you ever get to fish is Captain Highliner in the freezer section, you will not like this because it tastes like fish.  I started chatting with one of the women working there and she told me how she comes from a family of fishermen and they work for the man that owns Lone Wolf.  The only way to get fresher fish is to catch it yourself.  It came with a fantastic cup of tartar sauce and some coleslaw that was covered with fresh dill.  It was so good I didn’t share any of the fish with the dogs.  They did have a few little bites of fries but the fish was mine.  I considered going back for more but the parking lot was filling up and we had some road to put under the tires.

Highway 6 is the only road that seems to lead out of the Peninsula and I kept my eyes open for things to do.  I saw a sign for a lighthouse and decided to check that out.  The signage left much to be desired and there were a few wrong turns before we figured out where we were going.  To be fair, there was a truck in front of me that was doing the same thing so I wasn’t the only one that didn’t know where I was going.

We finally ended up on a long, narrow, dirt road that ended at Cabot Head Lightstation.  There’s a small museum in the lighthouse and some trails that run along the water.  I couldn’t take the dogs into the lighthouse so we hiked the trails instead.  The museum and grounds were maintained by volunteers and they rely on donations to keep everything running instead of charging admission.  For some reason, it makes me feel better about paying rather than have someone tell me how much to pay.

A short trip down the road and I saw Harvest Moon Organic Bakery.  Well I’m never one to let a bakery go past so in I went and I left with a loaded scone consisting of a scone with whipped cream and strawberries and a chocolate crossie (chocolate clusters with coffee beans, crunchy flakes, and a heavy hit of ginger).  This was one time the dogs had to sit out since the scone had currants and the crossie was chocolate.  Then back on the road. 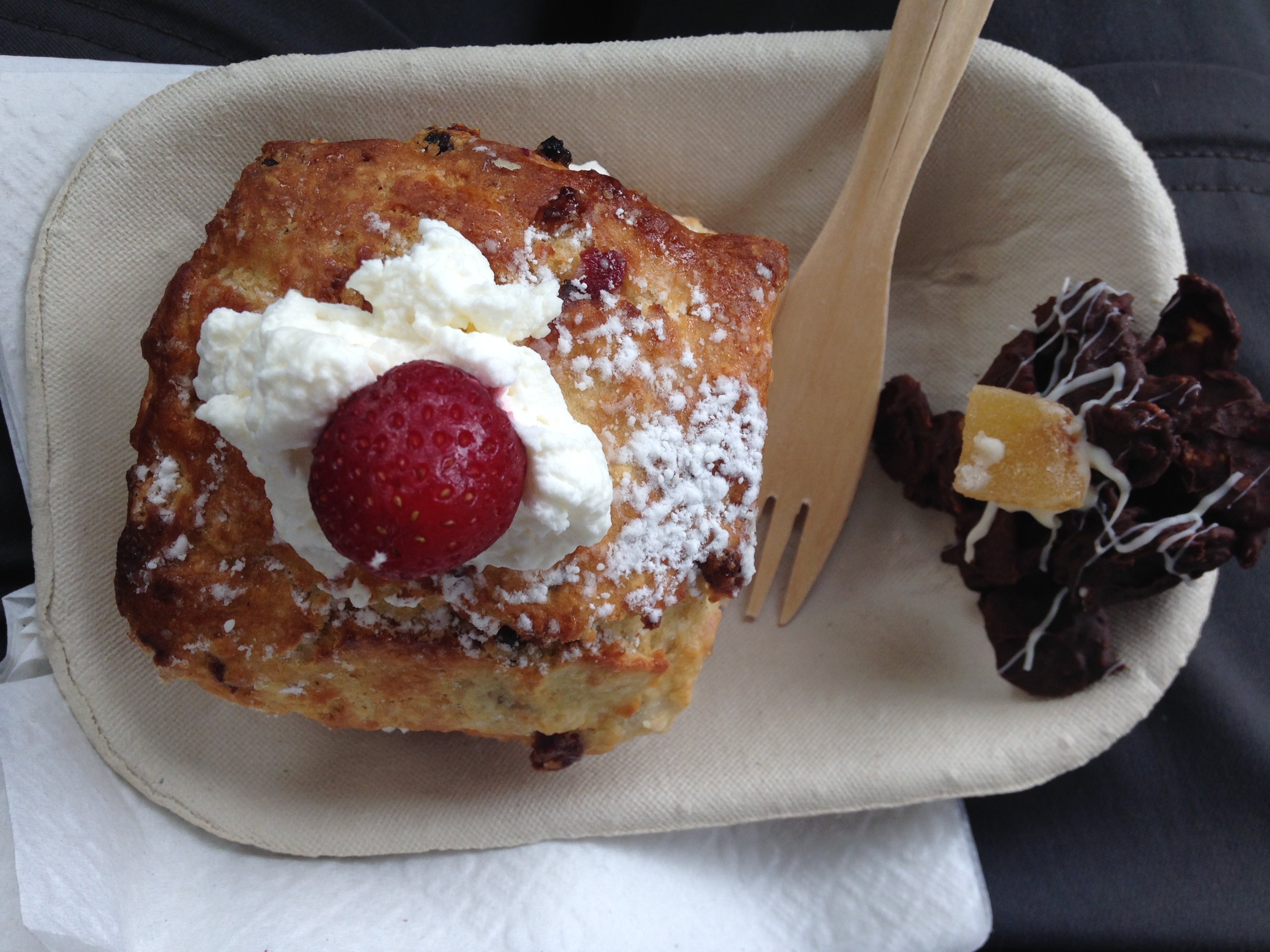 But not for long because we stopped a short distance away in Lion’s Head and hiked a section of the Bruce Trail while there was a break in the rain.  It was a little strange for me because this trail went through town and in one section, along a driveway.  I was a little confused when I came out of the trees and was staring at a shed and the back of a car.  I started looking around thinking I had missed a turn but then I saw blazes on the shed and some boulders along the driveway.

So there I am walking along this driveway and I look to my right and there’s the water and more rocky beaches.  There are steps leading to the beach so I figure “why not go look down there?” A woman was standing on the beach and we exchange greetings as we passed each other on the steps.  Then I hear her talking to people who came up behind me and apparently the steps are not part of the trail and they are her private steps.  Well didn’t I feel the ass.  Of course there were no signs indicating that and she could have told me when we were face to face.  I thought for a split second that maybe she was scared of the dogs but she didn’t give that impression when I spoke to her.  We walked down the beach for a while and when we made our way back, there was a statue blocking the steps.

Another thing I noticed was just how volatile the weather can be.  I had often heard about how unpredictable the Great Lakes are and we experienced it first hand.  The skies never really got clear but it would go from overcast to downpour and back again in the matter of seconds.  Another reason to keep our hikes short.  The dogs love to swim but they hate the rain.  Go figure.

While walking along the harbour, I learned where the town got it’s name.  There’s a section of cliffs across the harbour that apparently has the profile of a lion’s head.  I couldn’t see it.  What I did see was a stage set up just off the water and I could only imagine how awesome a show there would be. 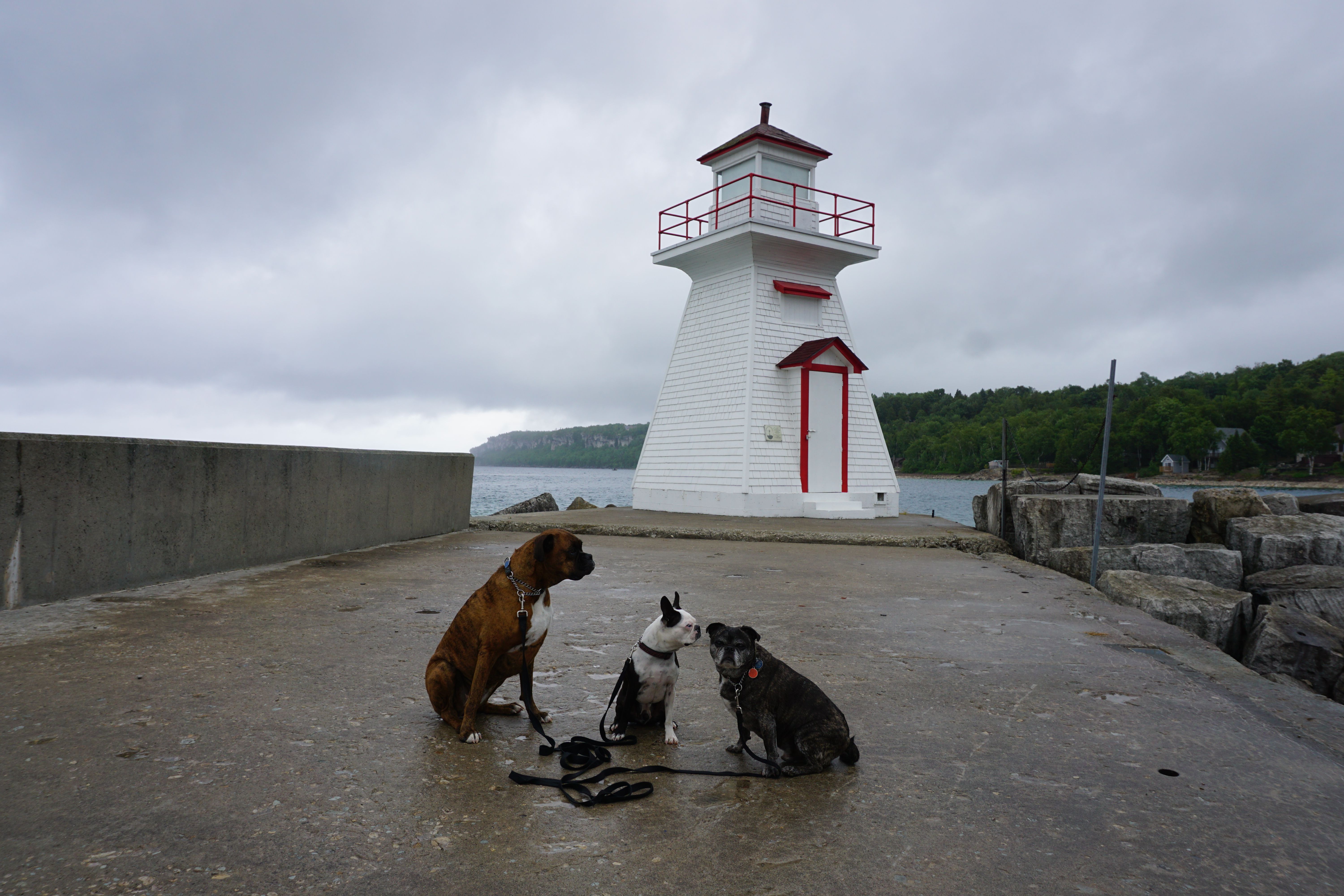 As we were leaving Lion’s Head, I passed by a sign for summer sausage outside a house.  I turned into the driveway and there was a sign on the front door saying to go around back.  So I go around to the back and on the garage is another sign saying to use the side door and the sausage is in the fridge.  I started to giggle as I opened the door and sure enough there’s a fridge with a price list on it.  Not only were there summer sausages but also pepperettes.  Well I bought a half sausage and a pack of pepperettes and turned to leave, after depositing my payment of course, and there in the yard was a husky.  In it’s run.  Just staring at me.  I didn’t even see it blink.  I almost felt guilty for some reason.  “I paid.  Really I did,” I said to the dog, even pausing to redo the math just to make sure.  I left, but not without a picture. 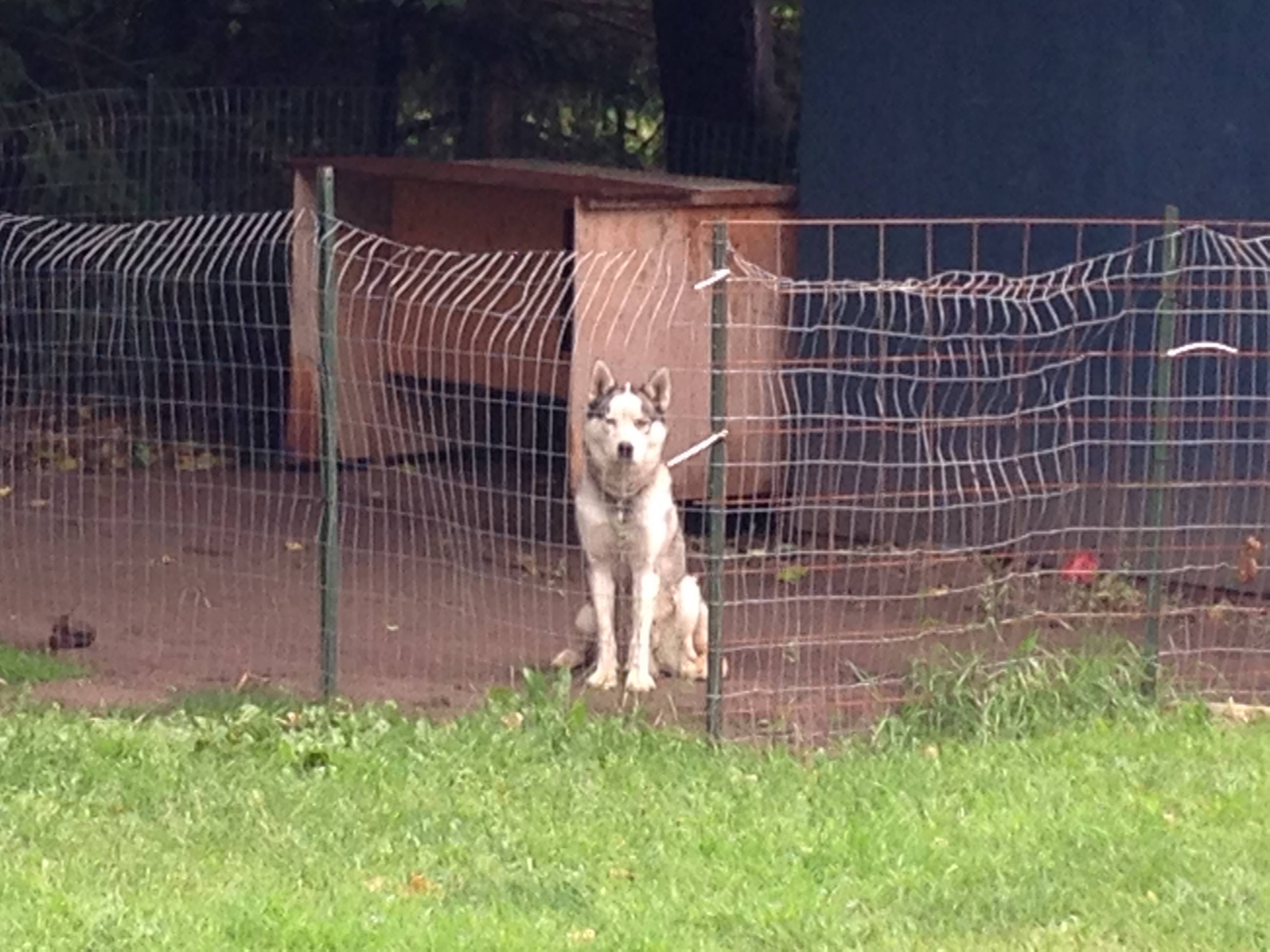 Well I didn’t get very far before I stopped into a farmers market.  I already have a pantry full of preserves and there wasn’t much in the way of vegetables that I could take with me, but there were strawberry and carrot muffins and those travel very well.  I asked about a good place to eat and was given directions to a diner just down the road.  Now let me tell you dear reader: if there was ever a time that talking to locals paid off, this was it.

I stopped in at Katemma’s Diner and if I hadn’t been told how to get there, I never would have found it.  I ordered the burger on a recommendation and it was by far the best burger I can remember having.  The patty was juicy and flavourful and the bun was perfect.  I took one bite and literally felt my eyes bug out of my head.  The dogs got a few crumbs from the bun and some fries.  I ate the burger.  All of it.  I don’t think I breathed at all.

I went back inside to tell them how much I enjoyed it and ended up speaking with the owner for a few minutes.  There were also a few regulars that came in and I always love to watch the banter between the customer and proprietor.  It’s why I love going to independent businesses.  I had noticed a steady stream of cars going down one road and asked what was down there.  She told me they were probably going to Shoreline Drive.  Well then…so were we.

Shoreline Drive follows the water and when I first turned onto the road, I was stunned to see the sky full of kite surfers.  I had never seen so many in one place and I stopped to watch them for a while.  We went down the road from the kite surfers and walked along the shore a little but I didn’t want to stress the dogs out too much.  With all the rock climbing we had done, I figured a few short and easy stretches would be good for everyone.

I wound my way through the roads, crisscrossing to the other side of the peninsula until we ended up in Wiarton which is known for one little fella: Wiarton Willie, an albino weather forecasting groundhog.  But before we went to see Willie, we stopped at Northern Confections.  Oddly enough, all I got was the coffee.  And an agricultural and culinary map of the area.  Score!

There is a large stature dedicated to Willie and we stopped for a few quick photos, causing ooooohs and aaahhhhs as people watched the dogs pose but the park was busy setting up for fireworks so we very quickly left.

As I was driving along, I noticed a sign for a KOA Campground and decided to see if they had spots available.  One of my co-workers had raved about them so I decided to check them out.  And they did have a spot available.  Then as soon as I drove to my site, I felt my heart sink.  There were so many people and the sites were TINY.  But it was a place to rest my head and a chance to spend at least one more day out roaming so I pitched my tent and went to sleep.