We had a leisurely, tick-free hike through the trails of Foothills Family Campground before breaking camp.  With a few hours before we hit the last pit on our barbecue tour, I munched on some of my homemade granola bars as I broke camp.  It took longer than it should have because my little buddies were determined to show me what they thought of their kibble by knocking their bowls over and staring at me like they were saying “Do you really expect us to eat this?”  Call me weird but I always try to pick up all of their spilled food; I guess it doesn’t matter so much in a busy campground but when we go out into the wilderness I try to minimize our impact as much as possible.  It’s just habit now.

So after a relaxed three hour drive and having driven 2933.8 kilometres, we arrived at Herb’s Pit BBQ in Murphy.  Even though it was literally in the middle of nowhere the parking lot was packed, leaving me to squeeze my little car onto the grass beside the driveway.  Fortunately most of the people were in the dining room so I lounged about in the gift shop as I waited for my barbecue sandwich and hushpuppies.

The sandwich was the most like the barbecue that I am familiar with: it was sweet but still with a bit of vinegar tang that did not cover the strong smoke flavour.  The sauce was so good I had a little bit of it straight up to try and figure out the ingredients.  I’ve never done a shooter of barbecue sauce but it was strangely satisfying.  The hushpuppies were good but not the best I had eaten on this trip.  And I love pickles so they were devoured in two bites.  We walked around the lot a little bit before we went back to the car.

We had reached the west end of the North Carolina Historic Barbecue Trail and as much as I was tempted to keep going, reality set in and now it was time to start heading home.  I had no route and no plans other than a large patch of green on my map between North Carolina and Tennessee.  With no GPS signal, I figured that I would head in a generally north direction.  My plan worked and soon we were in Cherokee National Forest.

We stopped at one of the first trailheads we found and after a short hike, we found something a little odd in the middle of a forest: pavement and a bridge.  We had found an old abandoned highway.  I was thought about following it to see where it led but decided there was a whole forest to see instead. 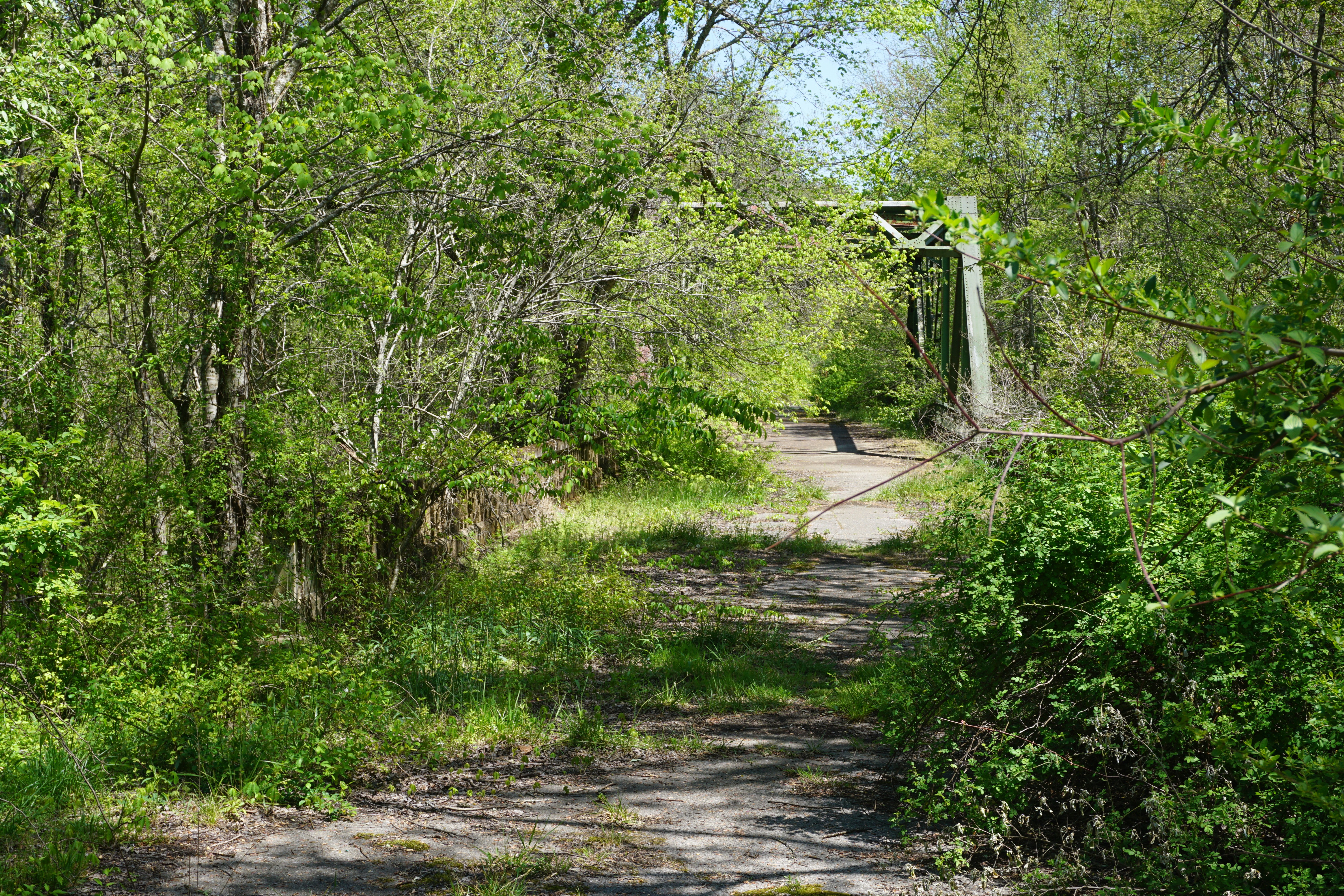 Signs for the Cherohala Skyway caught my eye and I started driving along that, thinking that I would find a good place to spend the night.  When I started driving the Skyway, I was somewhat disappointed.  After the Skyline Drive in Virginia, I had thought I would see sweeping vistas and panoramic views.  Instead I saw hills.  Nice hills but hills nonetheless. We stopped at some of the many scenic areas in the park and finally got some exercise in.

Next order of business was to find a place to sleep.  The first campground I came to was okay but the best available site was across the lake from a highway and the sound of the traffic reverberated over the water.  Then I went looking for another site.  And looking and looking.  Apparently I had gone to the side of the park with no campgrounds.  Then I found one and after a bone-jarring drive down a dirt road, I found a small campground.  I didn’t like any of the spots and the tree cover was so heavy that it made the sites look kind of dreary.  So back on the road.

And I finally found a map.  After  studying that for a few minutes, I had an idea of where I was going.  Fortunately it went over Bald River Falls and I was able to get some nice photos.


Then, finally, we arrived at North River Campground.  It was small and it was primitive and it was perfect for us.  I had the tent up, with much help, and we went for a hike to stretch our legs.

Oddly, though I hadn’t eaten for hours, I wasn’t at all hungry.  I guess I was sustaining myself on the copious amounts of barbecue I had eaten over the past few days. As usual, the dogs were sleeping by the time I slid into my sleeping bag.