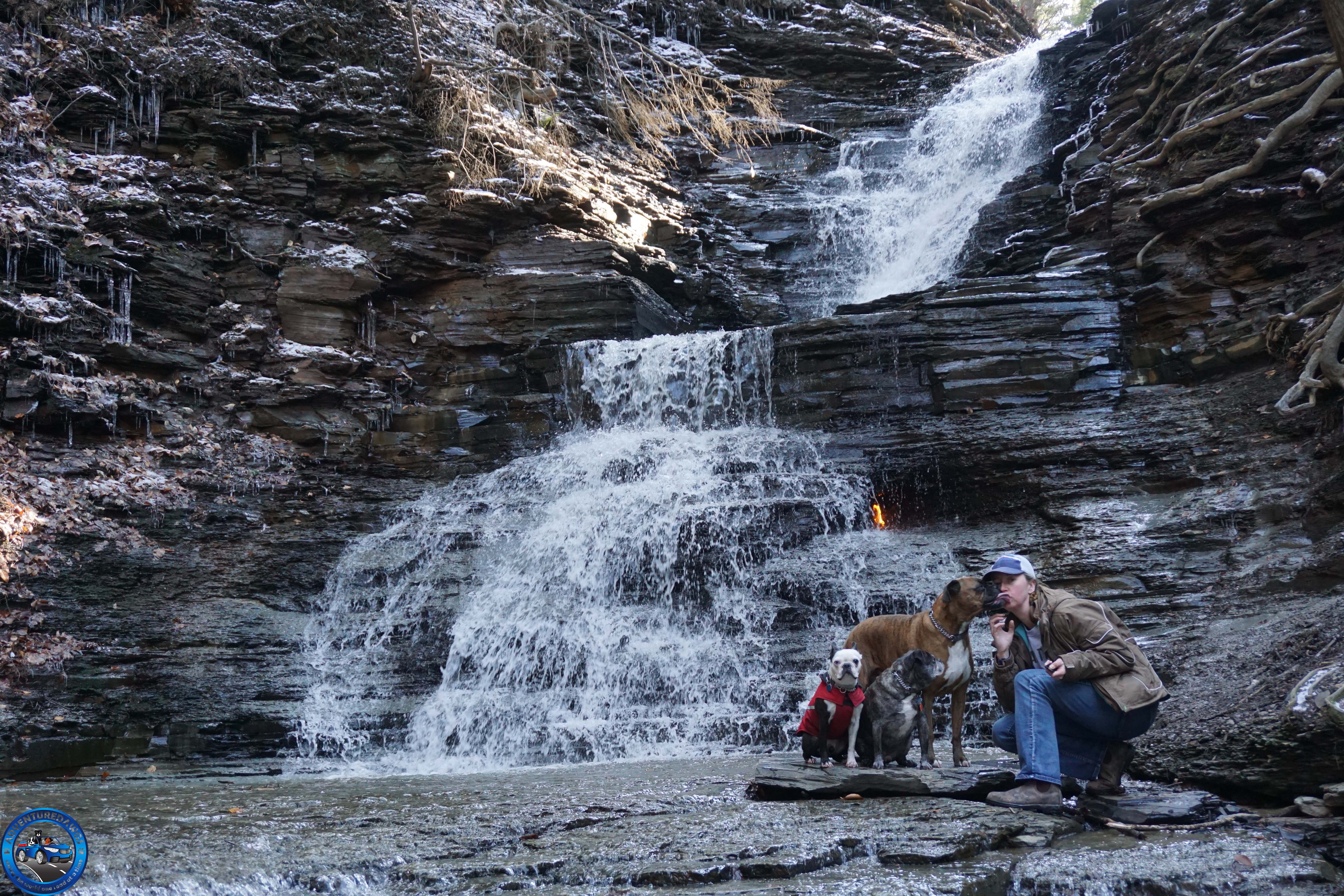 The weather may not be good for a road trip in Canada, but there is plenty of sun if you drive far enough south.  So with my first week of vacation this year that is exactly what I did.  For some reason, I did not prepare as much as I have in the past.  OK I’ll be honest: I think I was feeling a bit burned out and exhausted from work and just wanted to GO.  So while I packed my tent and sleeping bag, I did not have much in the way of food reserves.  I had also left my inflatable sleeping pad and stuffable pillow in my locker at work soooooooo that put a bit of damper on things.

And even though I went to bed late and completely beat, I woke up around 3:00 am.  I dozed off and on and then finally was tired of not sleeping so climbed out of bed at 4:45 am.  A leisurely breakfast of left over banana fritters (not my best work but it was a new recipe) and we were out the door at 6:00 almost on the dot.  Everything was going well until we hit traffic north of Toronto.   It really says something about infrastructure when you’re crawling along before 7:00 am.

Big shout out to Matthew Wakelee who had posted about Eternal Flame Falls (https://wordpress.com/read/feeds/44878580/posts/1318698544) and with south in our sights, it seemed like a good place to start.  But to start, we had to get there.  For some reason, when I entered Eternal Flame Falls, my phone tried to send me to Europe.  After almost throwing the stupid phone out the window, I did a bit more digging and found that the falls are in Chestnut Ridge Park.  OK so now I have a starting point.

Now anyone who has read my posts knows that I seem to have issues with getting across the border.  Don’t know why I turn into a babbling fool but this time was no exception.  I pull up to the booth and there is this gorgeous man staring back at me.  Imagine a Spanish version of Jason Statham.  On a side note, I wonder if they intentionally put the good looking staff at the border to trip you up.  So anyway, I’m trying not to humiliate myself more than I do on a regular basis as I hand over my passport.  He asks where I’m going and what I’m doing and is it just the four of you?  I almost melted when he made my dogs sound like little people.  Then “are you meeting anyone down there?” The outside voice said “no” but the inside voice added “want to change that?”  Fortunately it stayed the inside voice and soon we were through the border.

Less than 30 minutes later, I pulled into Chestnut Ridge County Park.  I put leashes on everyone then we set out looking for a map.  Hmmmm there was no map and no signs for these falls.  Finally I met a couple out walking their dog and it turns out I was at the wrong end of the park and I had to go to Seefort Road.  So back in the car and we continue on.  The next road we saw didn’t have a sign so I figured this was Seefort Road.  I drove into the park and there were signs for all kinds of things but nothing for a waterfall.  I get the dogs out of the car and head towards trees and finally I found a map.  And Seufert (not Seefort) Road is the next one down.  So back in the car we go.  Finally I see a sign for Eternal Flame Falls and I park the car.  The dogs looked at me with the “Are you sure this time?” look as I opened the door for them.  Can’t blame them for that I suppose.

The warning signs at the trailhead were encouraging (sarcasm).  The trail is an out and back that is only 0.56 miles each way.  I had read reviews about it being a tricky hike and not well marked.  At first it was muddy and rooty, just the kind of trails that we hike at home.  I found that the trail was extremely well marked with little numbered flame placards but they looked as though they were fairly new.  The trail leads down a ravine, then back up, then cuts back and down long the river.  You have to cross the river a few times which would be no big deal in the summer but in the winter, the water had frozen on the rocks leaving a slick sheet of ice on everything.  I’ll admit that I almost went down a few times and trying to navigate with the dogs on their leashes was a bit tricky.

We were picking our way over some fallen trees when we rounded a corner and there it was.  I had seen photos but actually being there left me speechless and standing awestruck. 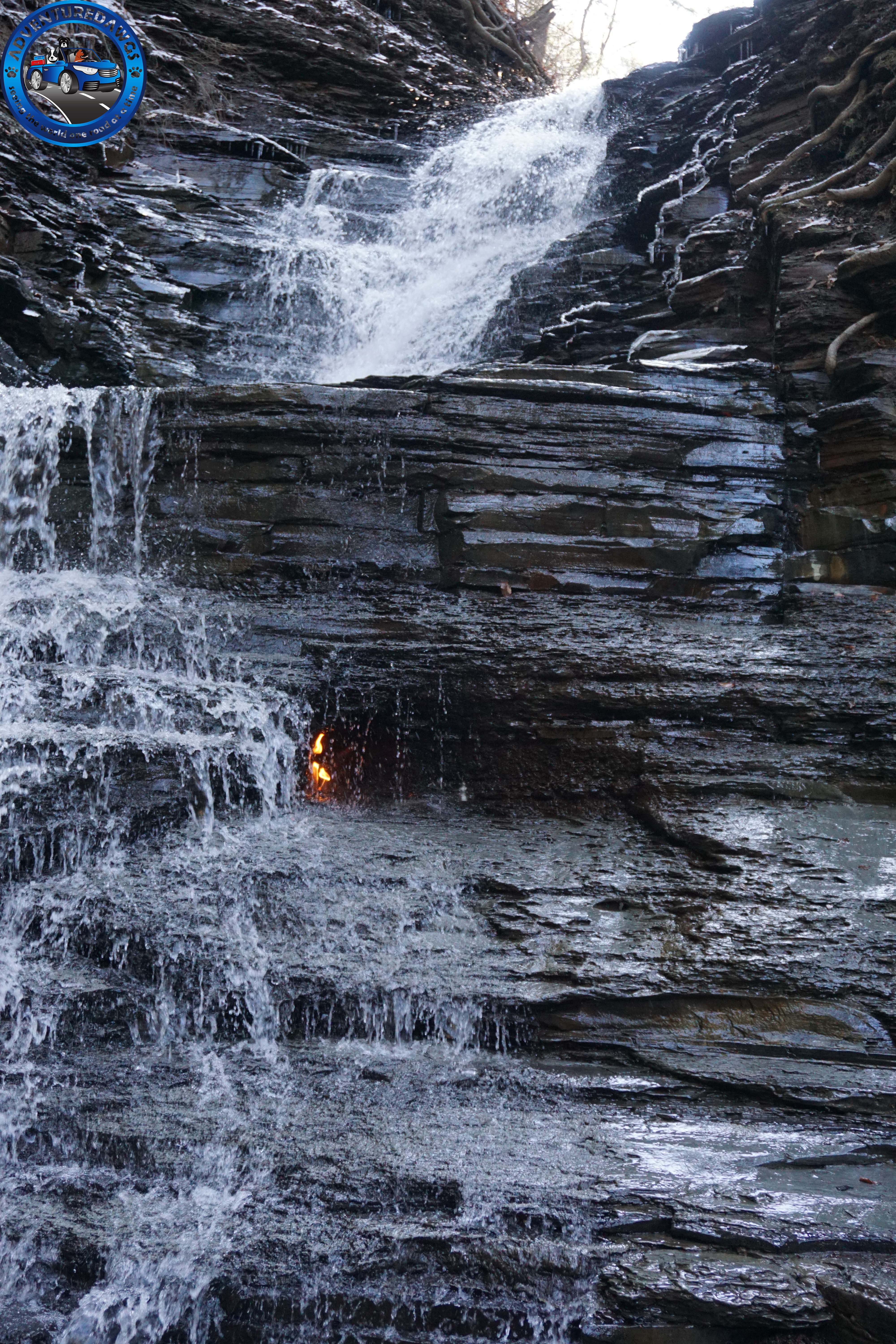 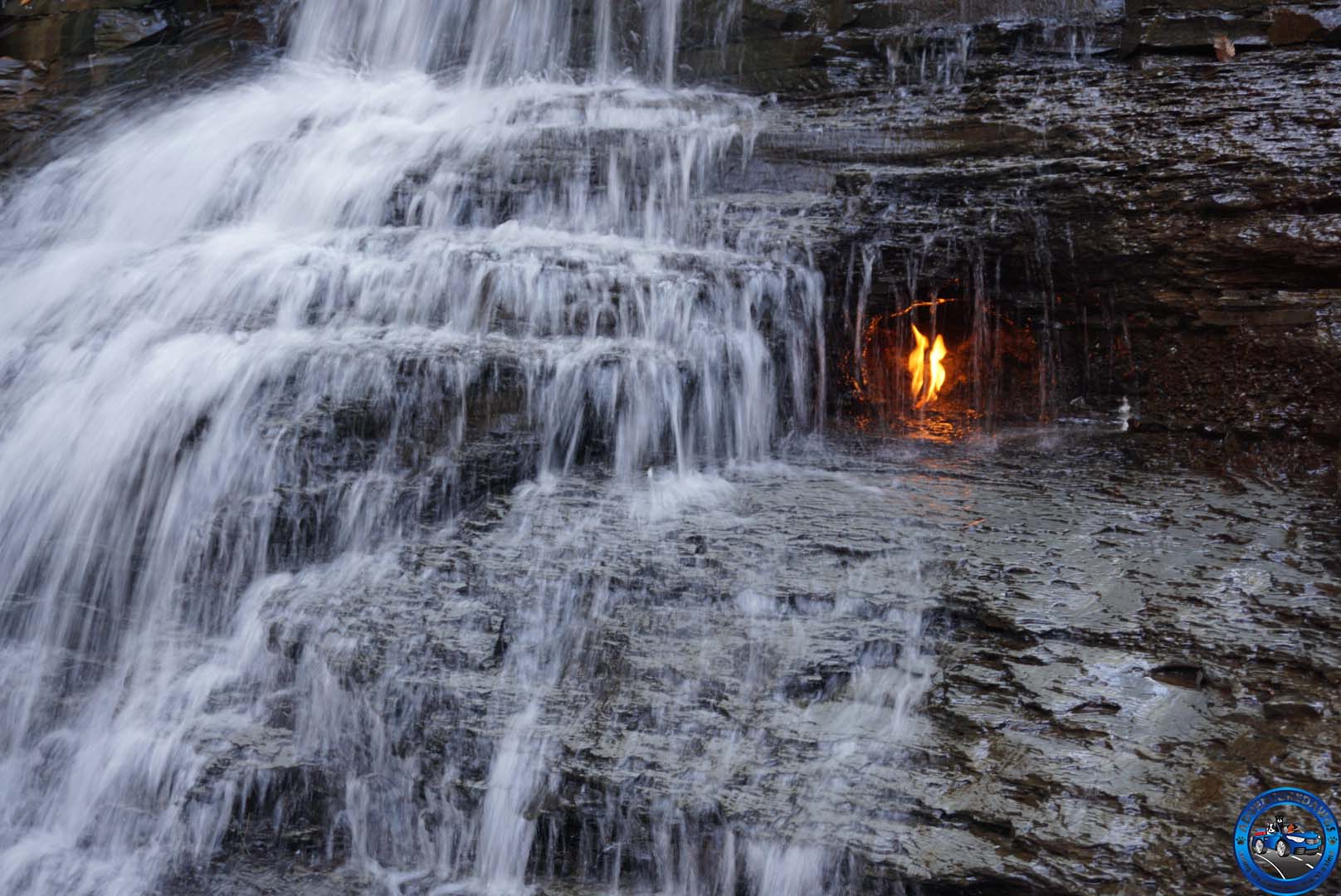 I stayed for a while taking photos (of course).  I loved the fact that we were the only ones there.  It is such a magical place that I wanted to imagine that we were the only ones that knew about it.  But I’m glad that we left when we did because we passed a woman and her dog who were going to the falls.  I was a little irritated that she didn’t put her dog on a leash meaning I had to pick by her across slick rocks but I was in too good a mood to be bothered much.

After that, I was in need of a cup of coffee so after a quick Yelp consult, we made our way to Bean Coffee House in North East Pennsylvania.  Yes the town is called North East.  I ordered an americano and then decided on a roasted red pepper hummus sandwich with cucumber and black olives.  The sandwich came with kettle chips and a pickle.  I was looking for some place to park and was dismayed to see parking meters everywhere.  A shame because the park would have been a nice to sit.  I had my eyes peeled for a parking lot when out of the corner of my eye I saw “Little Shop of Donuts” as I drove by.  I almost slammed my brakes right there but the car riding my rear bumper would have put an end to the trip fast.  So I drove the block wondering if my eyes had deceived me but no…there it was.  I was so excited I ended up missing the parking spots in the front and drove around the building before I launched myself at the front door.

Here’s the scoop: they have vanilla and chocolate donuts and put toppings on them to order.  I felt a tear form at the corner of my eye as I examined the menu.  A donut shop with a menu.  I decided to get two donuts and both were going to be chocolate: a Peanut Butter Cup and a Happy Camper.  One donut was covered with chocolate and peanut butter and the other got a smear of marshmallow, some chocolate, and graham crackers. Yes I know it’s selfish to get chocolate because the dogs couldn’t have any but I think the unopened pack of treats in the front seat would buy me out of any guilt they may throw at me. 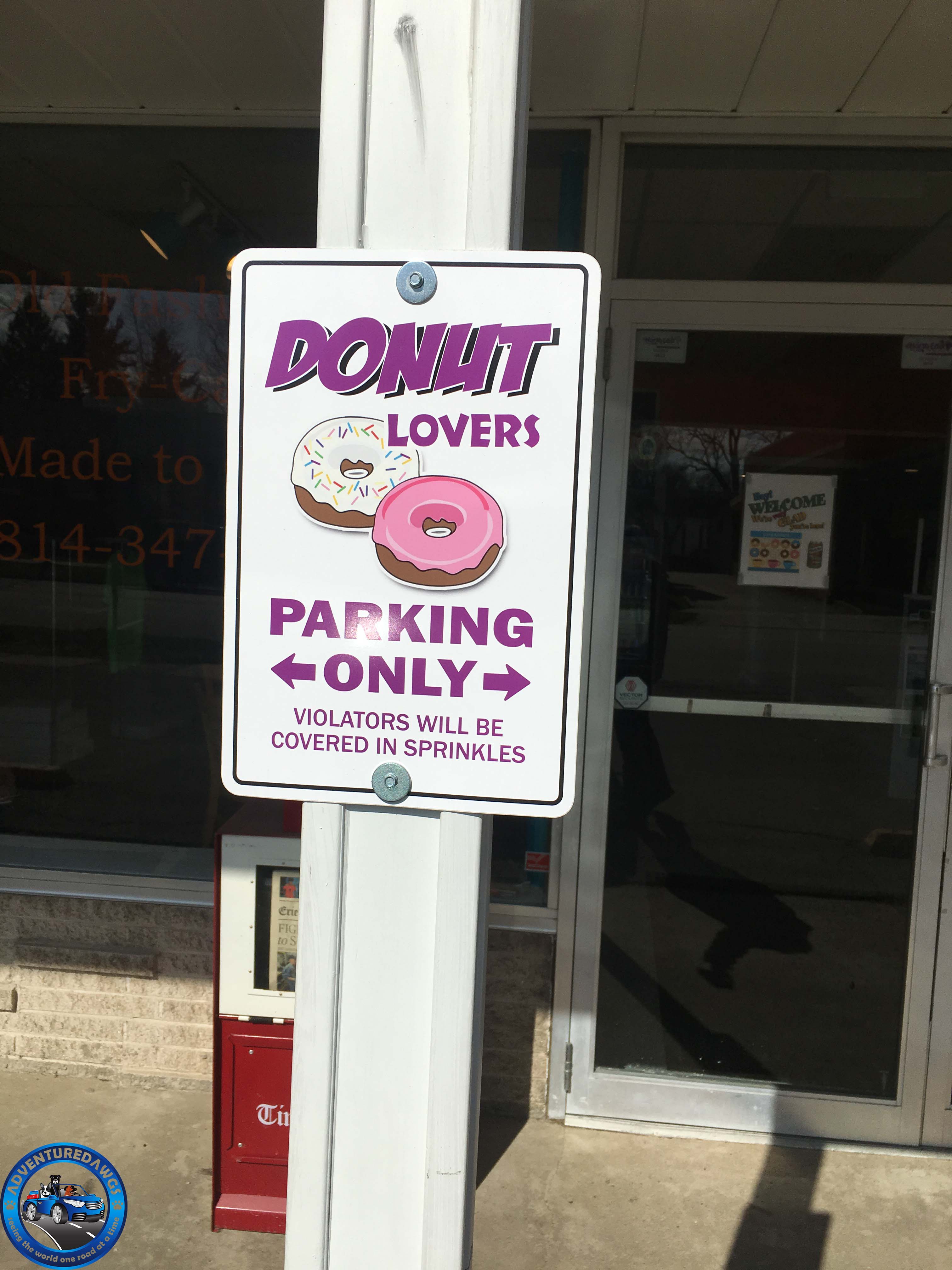 I was so fixated on donuts, that I didn’t think to eat my lunch there and continued on down the road.  Or maybe I didn’t want them to watch me as I laughed maniacally while I shoved chocolate and peanut butter and marshmallow into my mouth.  After a short drive to the outskirts of town, I found an empty church lot and parked there to have my food.  The sandwich was kind of disappointing.  I really wanted to like it but the bread had that almost-toasted or slightly-stale feel to it and the toppings were pretty much piled in the centre of the bread so the edges of the sandwich were just bread.  The best part about it was the pickle.  The americano was excellent however.  I had the Happy Camper donut first.  The donut was good: light and cakey and not overwhelmed by the toppings.  I was going to save the other one for later in the day but later turned out to be less than an hour.  So it wouldn’t get stale…yeah that’s it.

Because I was limited for time, I spent longer on the interstate than I normally like to which meant that we visited a few rest stops.  For the record, Montana still has the best rest stop pet areas.  By far.  We stopped at one in West Virginia that was so thick with poop that the dogs didn’t even want to walk there.  Although I did notice that the silhouette they use for dogs is a boxer.  Strike a pose Piper.

I booked a room at the Travelodge in Beckley, West Virginia.  I’ll admit that the room was cleaner than I had expected it.  Not a big fan of carpet but it’ll do.  My room was on the ground floor at the end of a hallway with a door to the lot.  The door opened to a rather secluded and concealed area that was surrounded by trees and next to a cemetery.  All of that was no big deal but the fact that the door didn’t lock was a bit concerning to me.

After a quick check on Yelp, I noticed there was a Mexican restaurant close by; just a few blocks away and on the other side of the street.  Rather than wait for the lights to cross the street, I stayed on the hotel side on what appeared to be a wide grassy strip in lieu of a sidewalk.  Well soon the grassy strip started to slope.  Next thing I know, we’re picking our way across a grade of more than 45 degrees.  So I guess I can turn a walk around the block into a hike.

By the time I walked into Campestre, I was hungry.  The kind of hungry where you don’t want to talk, you just want someone to put food in front of you.  After some quick questions, I ordered the Tapatio.  I had to wait another ten minutes so I took the dogs and we continued walking.  And then I saw something.  A sign emerging from the pools of light cast by the streetlights and passing headlights and the glow of nearby stores:  Chocolate Moose Coffee.  I was tempted.  Really tempted but decided that would be a visit best saved for the morning.

We went and picked up my food and decided that we had had enough hiking for one day so we stayed on the sidewalk and crossed at the lights at the hotel.  I sat on the bed and after toasting the days safe travels with the Road Trip bottle (Jack Daniels Honey), I opened the container to reveal chicken and ribeye steak and mushrooms and cheese and beans with flour tortillas and salsa and a sour cream with some kind of spice and fresh tortilla chips.  It was so good I barely stopped to breathe.  I would definitely go back there again.  For some reason I found the sour cream to be intriguing; perhaps because I could not quite identify the flavour.

Sleepy and satisfied, I squeezed myself between the dogs and drifted off to sleep.