Watching for Lights in the Sky 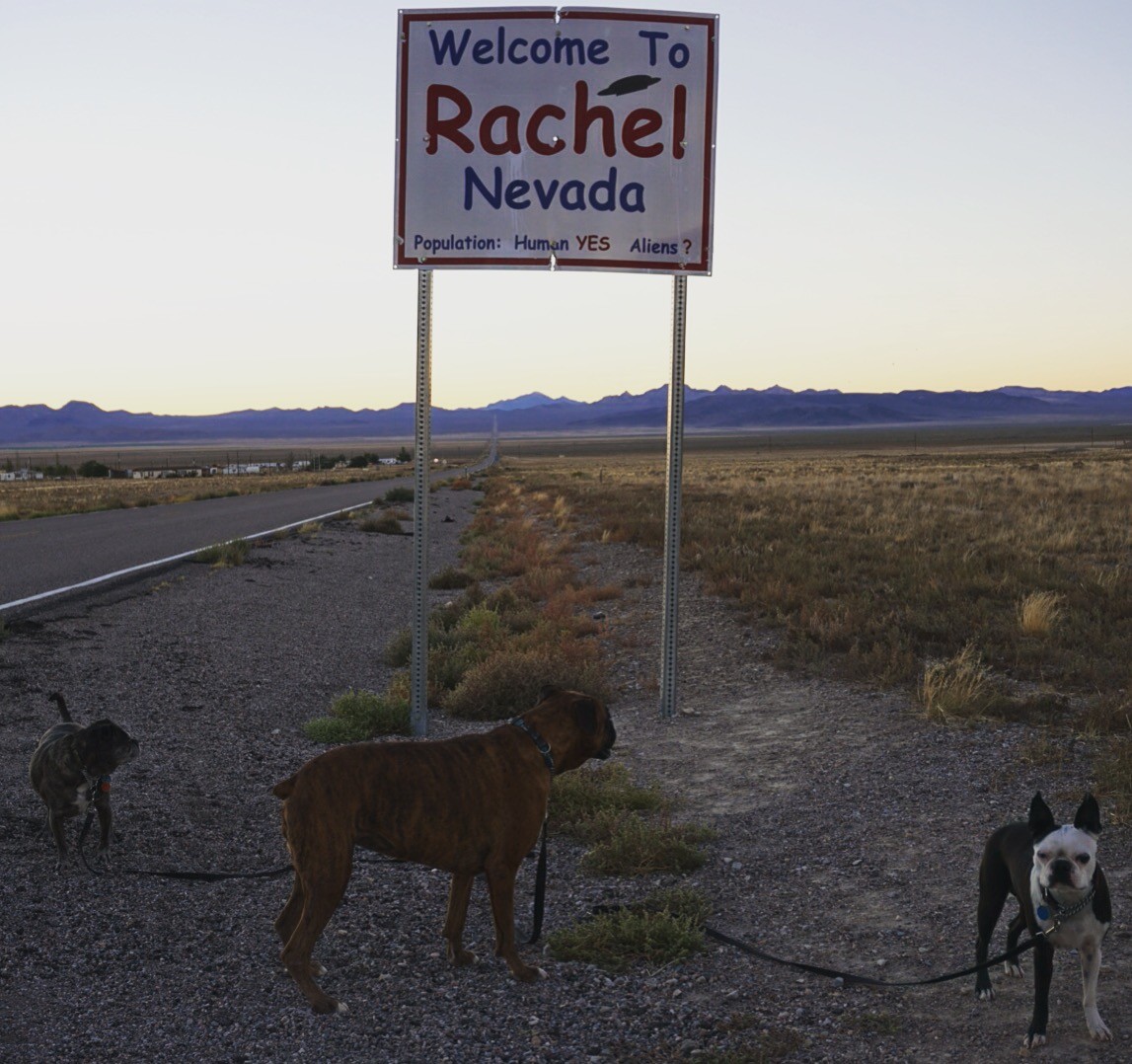 I was woken up a few times during the night when vehicles pulled into the lot but I didn’t hear anyone walking so I’m not sure what they were doing.  When I climbed out of the tent, I noticed that there was a rock dwelling at the opposite end of the lot and got worried that I was trespassing on an attraction or something.  I packed up the tent really quickly.  The van that I had seen was a rental camper van but at first I thought it was part of the attraction because of the wild paint job.  I wasn’t in such a rush that I couldn’t stop to take advantage of the light as the sun rose.  The rock was such a remarkable shade of red it blew my mind.  Again, the photos posted have not been altered.

I drove back to the restaurant at the Cliff Dwellers Lodge and sat to enjoy breakfast on the patio with the dogs.  The woman working there recommended the corned beef hash for breakfast. It was deliciously simple and surprisingly filling.  The service was a bit slow but it just forced me to relax and not rush into the day.

I’m glad that I had stopped for the night and was able to enjoy the scenery through Arizona.  When I stopped to get gas just outside the road for the north rim of the Grand Canyon, I was tempted to check it out.  I mean how often am I going to be near the Grand Canyon?  The man working at the station was super friendly and told me the road is 45 miles out and back which he said makes it about a 90 minute round trip.  So I decided to make the drive.  Yes it was slightly out of my way but why not?  I started driving down the road but then when I saw a $30 vehicle fee I turned around.  If I’m going to spend that much I want to make a day of it.

We passed through Hurricane Utah and where we, OK I,  stopped for a coffee and found a dog park on the edge of town.  There were two sections to it: one with grass and the other was rocky.  There was a man with a couple of older dogs on the grass side and we chatted for a little bit over the fence.  I’m not going to lie about it: he said a few things that were a tad bit roof-side.  When I told him that we didn’t go to Zion National Park (I’m kicking myself for not allowing more time for the parks) he seemed surprised since I looked like a hiker.  I told him that I do hike and run and he made a comment that I looked good.  Hmmmmmm yes it’s a compliment and all but the way he said it was a bit creepy especially when he followed it up with “too bad you’re not staying longer”.  Maybe I’m just being sensitive.  I mean, it’s not like he groped me or made any lewd gestures or anything. And I try to give compliments to people to counteract the negativity that seems to be rampant in this day and age so maybe he was just doing the same thing.  Who knows.

I continued the drive and then I saw it.  The reason we drove all this way.  I wasn’t quite sure what to expect when I turned off the highway at the east end of Highway 375.  Nevada Highway 375 is also known as the Extraterrestrial Highway and the reason why will become very clear shortly.

We stopped for some quick pics then started down Highway 375.  Until I saw a sign that said there’s no gas for 150 miles.  I looked down at my tank and tried to do some math in my head as I converted kilometres into miles and tried to factor in stops and possible changes in terrain and any delays…I decided that it wasn’t worth the risk of running out of gas with three dogs in the desert so I turned around.  Back at the junction, there was a town closer than Alamo so I headed in that direction.  Turns out it isn’t much of a town so I drove back the way I had come and back into Alamo.  And now, finally, back on the highway. 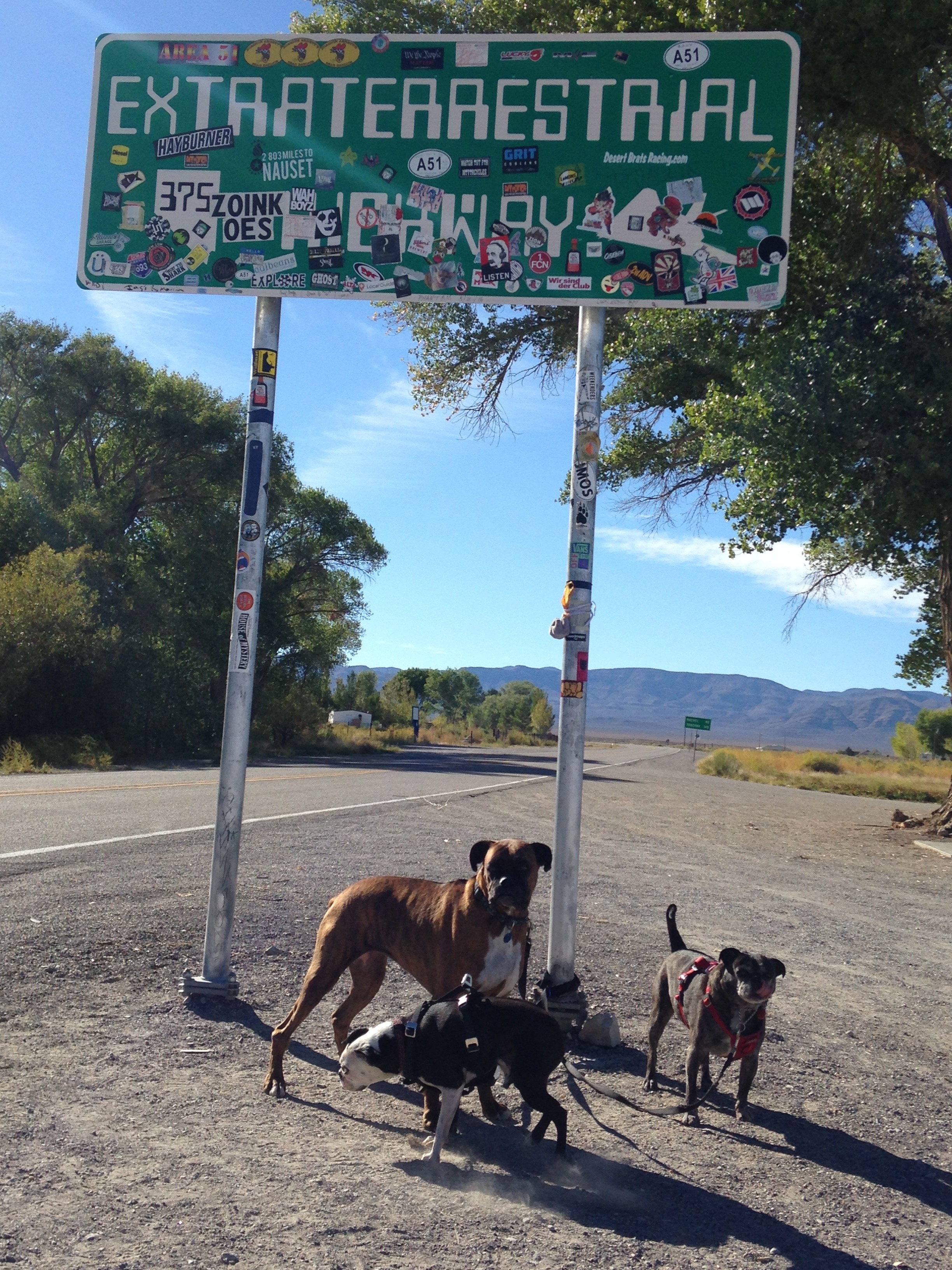 As we continued along the highway, Joshua Trees started to appear for the first time.  The farther west we went, the thicker the stands became.  I was tempted to stop but they were so prolific and the lighting wasn’t what I wanted so I figured I would stop later when it was better.  Then all of a sudden, there was nothing.  Damn.

I was looking for something, some clue for what was out in the desert.  For you see, these mountain ranges hide something from prying eyes.  An area know by many names.  Dreamland.  Groom Lake.  But it’s the most famously known as Area 51.  That’s right.  THAT Area 51.

Now I wasn’t expecting anything so obvious as a sign that says “secret military testing facility this way” with a big arrow. But I did know that there was a gate and a black mailbox in the middle of nowhere.  I saw one track that seemed to be more well used that others but I saw a truck booting towards the road at a fairly fast pace.  And when I looked at the tracks, I had some doubts that my car would be able to navigate them.  So no exploration of the desert.

Then we drove into Rachel.  Rachel Nevada is absolutely tiny.  A collection of trailers in the middle of the desert.  I saw a gas station at the edge of town that obviously hadn’t been used for some time.  Then just off the highway is The Little Aleinn, a restaurant and motel which I can only imagine is the only business in miles.

I wasn’t sure about where to stay yet but I knew that I hadn’t eaten anything since breakfast so I knew that I could stop for food at least.  I ordered the saucer burger, which is a pretty standard burger but with garlic mayo which totally made the burger.  I was talking with the woman at the counter and asked her if there had been any lights in the sky and with wide eyes she nodded and said yeah there were lots.  OK sold.  I booked a room and took my key before taking the dogs for a walk.

The motel is made up of some trailers and I was staying in the one with the best view of the mountains.  When I walked inside, I realized it’s a shared trailer meaning I had roommates.   It had a shared kitchen and washroom but we each had our own rooms.  We rested for a little while and once night fell, I took the dog’s blankets and the dogs and went outside to the parking lot.

Spreading one blanket out, I tossed the other over my shoulders and the four of us sat together and watched the stars.  I had Piper laying beside me under the blanket with her head in my lap.  Leo on the other side who couldn’t decide if he wanted to be under the blanket or not.  And then Jack wanted to be Jack and sat on the rock that I has sitting against.  Always the guard dog.

One of my housemates came out and I asked him when the lightship started.  He didn’t know since he had never been there before and then went back inside.  A woman came out with her fussy child and we chatted for a long time.  They had spent the past week camping in various parks and had stopped here because her husband was a conspiracy buff even though she didn’t believe in any of the alien stories.  Finally with a sleepy child, she went back inside  leaving the dogs and I alone with the stars again.

Do I believe that there is life elsewhere in the universe?  I find it hard to believe that there can’t be.  I mean, every single star you see is a possible sun.  And every sun could have how many planets?  And that’s assuming that we truly understand how the laws of the universe work because when you think about it, we really only understand how it works here and here is such a tiny place.  Do I believe that there are crashed vessels from far-off species that are being reverse-engineered at Area 51?  I think I want to believe because it means that there is so much more to things than this little ball of blue that we call home.

Having said all that, I do believe that this area is being used as a secret facility to develop aircraft.  It has to happen somewhere after all and that is a pretty good place for it.  Whether there’s alien technology is almost irrelevant for that reason.

Finally I went back inside and climbed into bed, not exactly disappointed with the lack of a show.  I mean the woman at the restaurant may always tell people that the lights are crazy all the time or they don’t do test flights on the weekend and it was a Saturday after all. With the three dogs piled onto the double bed, it was a bit of a cramped sleep but I did eventually drift off, listening for the sounds of planes overhead.