Welcome to The County 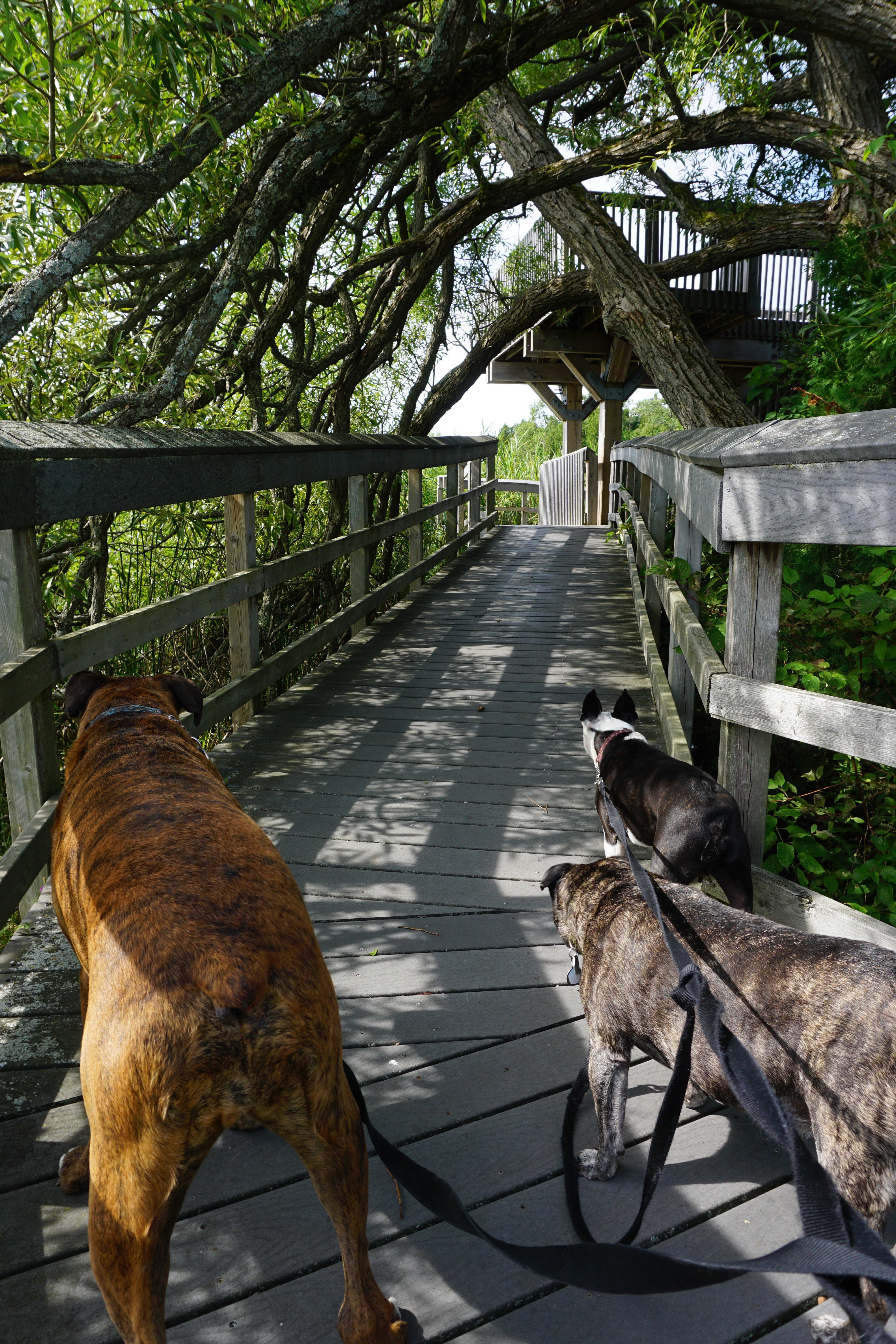 It hit me like a ton of bricks as I was looking at weather reports, flipping through books, overworking my search engines: I had lost our way.  I mean I was actually doing research on places to go.  So I closed my computer, packed the car, and headed east.  Why east?  If we made it to the coast, I’ve been having a craving for seafood.  If we didn’t, I haven’t been east much so why not.

Standard Road Trip Rules would apply.  Since this was going to be a short trip, I packed a bottle of Merlot but more on that later.

I took a straight drive to the 401 since there’s a lot of city to clear.  However, coffee was soon beckoning and I stumbled upon Skylight Donuts in Bowmanville.  I’ll admit to some trepidation as it was a brick shack in the parking lot of a gas station but when I rolled up, the glass window was stacked with row upon row of donuts.  I asked what was popular and was told the cinnamon swirl, apple fritter, and cherry.  So I got one of each.  But the best part was that when she handed me my coffee there, resting on the lid, was a dog cookie.  Wow!  Talk about the little things.

I left the parking lot and noticed signs for the Dave Boyd Memorial Dog Park which just happened to be an off-leash dog park.  Coffee, donuts, and off-leash park?  Could this trip have started any better?!  It’s not the nicest park we’ve ever been in: it’s in an industrial area and is relatively flat with just grass but it has two large sections with good fencing, sturdy gates, and lots of benches.  The dogs had a romp around as I crushed a surprisingly good cup of coffee and cinnamon swirl.

Back onto the highway for a little bit longer.  Well until I saw The Big Apple.  It literally is a giant apple that is next to the 401.  I had never been there so I decided to stop.  It’s a nice little tourist spot that I could see being really popular with kids.  They have a petting zoo and a train and there are some nice souvenir things.  You can actually go inside the big apple to an observation deck at the top.  I didn’t because I wasn’t sure how the dogs would handle all the stairs.  There were also rabbits running around all over the place but the dogs didn’t really care about them.  I guess it’s because we have rabbits running around at home.  They were rather intrigued by the goats though.  I actually saw the goat version of Leo who was walking around the pen then just stopped, dropped, and rolled and rolled and rolled.    While we were there, I just had to see what was available by way of food.  Strangely enough, apple products dominated (sarcasm doesn’t translate well into type).  I briefly thought about getting something to eat but just grabbed an americano which was meh.  Then I noticed the counter for wine and ciders.  Well now…A few quick samples and I left with a few bottles.

I decided to stay off the 401 at that point and take Highway 2 as we continued east.  It’s lovely country driving and then when I saw the signs for Presqu’ile Provincial Park, I stopped to do some hiking.  It’s fairly flat and the trails are wide and well maintained which is great for the dogs.  The first trail we hiked was the Owen Point Trail. It hugs the shore but you can’t see the lake because of tall thick grasses.  And when I say tall I mean over my head and then some.  There are five lookouts that do lead to the beach but dogs are prohibited because they would disturb the shore birds.  I understand why, it just would have been nice to sit near the water.

Then we went to the Marsh Boardwalk Trail.  It’s another short loop trail that is almost entirely on a boardwalk with a couple of lookout towers.  We were about halfway along when I stopped for a second and Piper leaped off the boardwalk.  I thought she just wanted to get into some water.  Nope.  About 20 paces later…If you’re at all squeamish you might want to skip to the next paragraph…Piper all of a sudden has diarrhea all over the boardwalk.  So there I am, with pooh bags trying to clean the mess as best as I can.  We haven’t seen anyone for a while and now of course a family of four just happens to walk by.  I tried to pull the dogs to one side as best as I can while not stepping in the mess and making sure they don’t step in the mess and making sure the family doesn’t get mobbed by dogs.  Once I’ve smeared up as much as I can, I tried to rinse the boards down with my water bottle with no luck.  I’ve got nothing else on me that I could use and there’s no real vegetation as the weeds have been cleared from around the walk.  And then I spot a lone stub of a cattail just within reach and snap that off, using it like a giant cotton swab to wipe down the boards.  Finally I stood, stretched my back, and continued along.

We caught up to the family of four and just after we passed them, I felt a fire all of a sudden in my left calf.  I’m not kidding; it was like someone jabbed a lighter into my leg.  It was so sudden I almost yelped and buckled but seeing as how there were four people that were probably already wondering about me, I just gritted my teeth and looked down.  I saw nothing.  A few more steps and I had to stop again, lifting my leg up to contort into some kind of bizarre position.  Finally I spotted a tiny red mark but I had felt no bugs on my leg and did not see anything embedded.  I kept walking and eventually the fire did ease but it felt as though my calf were being pinched in a vice.

Ignoring whatever was happening in my leg, we drove further into the park and I stopped at the day lot.  There were a bunch of picnic tables on the edge of the lake and we climbed down to the waters edge where I had a sandwich that I had packed and the last of the donuts.  I let the dogs swim for a little while before we left and then we stopped at a lighthouse to check the view.  After that, there was one more trail just inside the park boundary.  It was another short loop but by this time, the dogs were slowing down a little so I knew it was time to go.  Back in the car and eastbound we go.

Prince Edward County (affectionately known as “The County”) is a hub for foodies, wineries, and artisans.  In just under 1 050 km2, there are almost 40 wineries alone, never mind breweries and cideries.  That in and of itself would not be a reason for me to go since I can really hit those until Piper learns to drive, but add on some gorgeous scenery and damned fine restaurants and it’s worth going. I also have an old friend who lives there so I was hoping to stop by at some point.

First stop: Sandbanks Provincial Park, hopefully to spend the night.  It is a very popular park so I had little hope of getting a site  at the last minute.  Needless to say, I wasn’t surprised when I was told it was full.  I began checking some private grounds around but most of them were also full and the ones that weren’t had trailers crammed in like sardines.

Finally I stumbled onto a campground.  I wasn’t really sure where I was at this point but when I drove in there were plenty of empty sites.  After calling the number at the office, I spoke with the owner who told me to pick a site and she’d see me when she was done her errands in town.  Cool.  I picked a site and set up the tent, trying to keep the dogs out until I had the bedding in so they wouldn’t puncture the floor.  I went to get my backpack and the three of them snuck into the tent and were sprawled out before I had turned around.  I had a good laugh at that and sat with them for a minute.

When I opened my eyes, it was almost dark out.  I was laying with my body on the sleeping pad and my legs on the dog blankets.  Piper was sleeping on my pillow, Leo was in front of me and Jack was curled up at my feet.  I had no idea that I had been so tired.  I had also forgotten that I had left the trunk of my car open with the key in the lock.  Not like me at all.  We went for one short walk down to the shore and then went back to the tent.  I was so tired that I had forgotten about my bottle.  I would make up for it later…