Baby Steps and a Short Trip 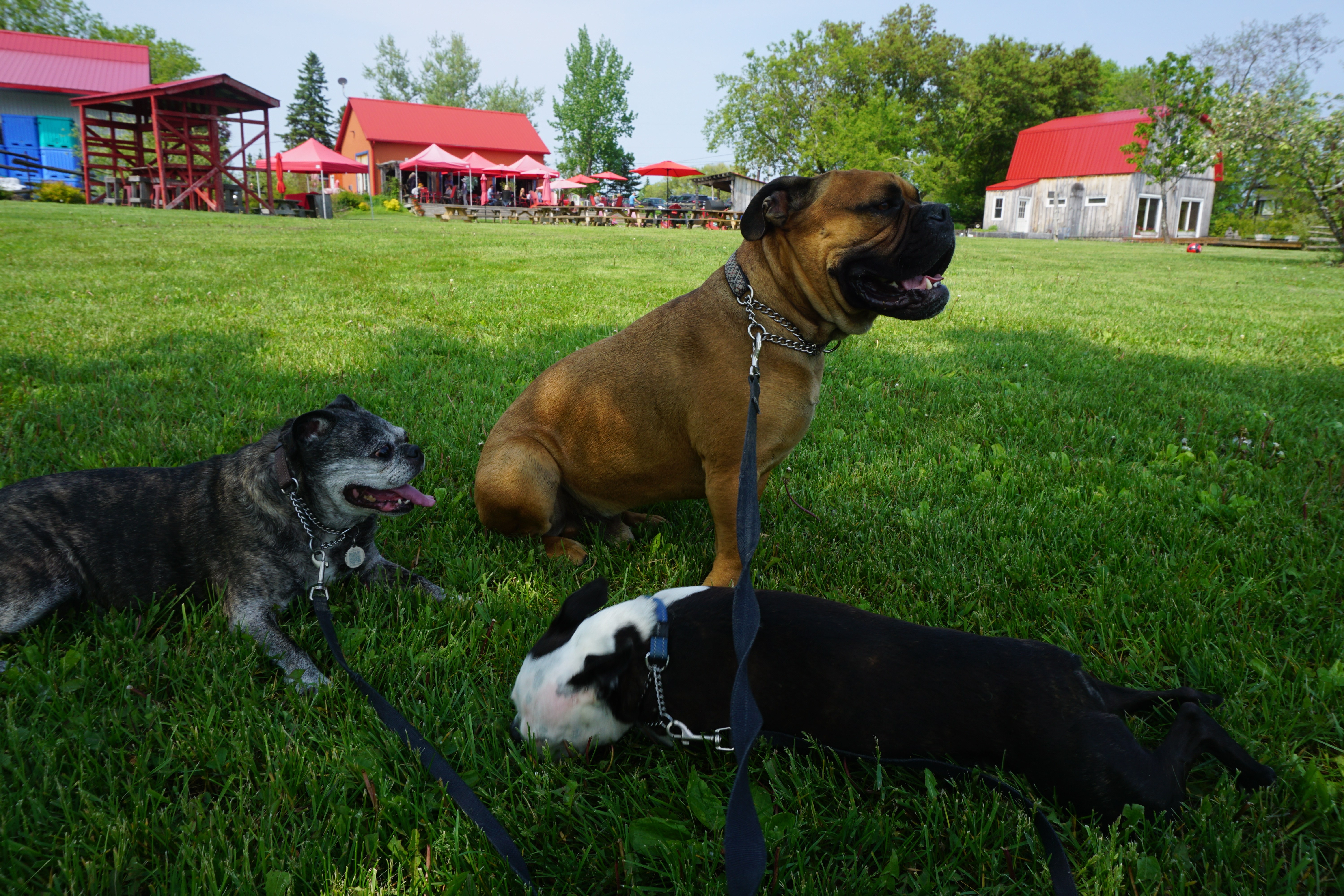 It feels as though there hasn’t been much adventuring for these dogs lately.  Between a new dog joining the pack with all the issues that brings, Leo’s unexpected surgery, and absolutely horrible weather, we’ve been staying close to home.

King continues to adapt well to his new life and we are making great progress with his aggression towards other dogs.  I found the biggest step for me was in changing how I saw his behaviour: I stopped seeing him as being “aggressive” even though he was exhibiting signs of “aggression”.  I came to see how stressful it must be for him to feel that he has to attack before another dog attacks him.  It reminds me of the hypervigilance experienced by soldiers and police and I felt a sense of sympathy for him.  With that, the focus changed from correcting him when he reacts to other dogs to reducing his stress. If you didn’t read about what led to King’s aggression, click here to catch up.

Whenever we see another dog, I basically start shoving treats down his throat as fast as I can.   Since King is extremely food-driven, I’m creating (I hope) positive associations with other dogs.  Now he will look at another dog, then sit and look at me with long strings of drool hanging from his jowls.  There is the odd time that he’ll give a half-hearted lunge but it’s almost as if he’s doing it “just because”.  He even briefly went nose-to-nose with Leo’s girlfriend, a Great Dane named Phoenix.  When I take the dogs for walks through our neighbourhood, we almost run a gauntlet of dogs in their yards and for the most part, King ignores them all.  When he does show interest in one of them, I’ll have him sit and feed him treats until he relaxes and pays more attention to me than to the dog and we move on.

It also helps that my friend and former dog-sitter brings her dog for a walk every other week and we’ll often go for double digit walks together.  The first time King met Jacques, we spent most of the walk just trying to keep them apart.  Now a few short months later, they not only walk near each other but have actually been able to be within feet of each other without batting an eye.

It’s easy to forget how far King has come some times, kind of like when you start on a weight-loss program: you see no progress but then all of a sudden you realize that your jeans fit better (I like this analogy better than the opposite with putting on the weight).

My guidelines for King’s education are simple:

1. Exercise, exercise, and more exercise.  I work very hard to give him healthy and acceptable ways to burn off all his excess energy but not so much exercise that he hurts himself.  It takes time to strengthen soft tissues so we often go for several shorter walks, rather than a couple of long hikes.  Not only does it burn off energy but it helps to reaffirm my role as the pack leader. King even loves to go for runs with me and since I’m still rehabbing, my runs are short and slow with lots of walk breaks, perfect for a squishy-faced dog with stubby legs.

2. Have defined rules.  I know what behaviour I want from my dogs and what I don’t, which then leads to…

3. Consistency with the rules.  I can’t let him pull me on leash one day and then not let him do it the next.  It’s not fair and is just confusing.

4. Reward positive steps.  I like to catch him being good and reward that rather than just fixating on misbehaving.

5. Correct what needs correcting. He’s been with me long enough to know that yanking my arm out of the socket is unacceptable and will get a correction.

6. Let King be King.  He has got such a quirky personality and while some things may be seen by some people as “bad” it’s just part of who he is, like when he has a temper tantrum or gets upset that I don’t let him outside fast enough for his liking. Seriously, if you want to see what a 70 lb dog-toddler having a temper tantrum looks like, click here. Or when he wants to go outside and I don’t jump up fast enough watch it here. You’ll have a laugh I guarantee.

Wanting to get back into travelling, I packed up the dogs for a Saturday drive and we headed east.  Well, first we headed south to the 401 through Bowmanville and just happened to pass by Skylight Donuts, where you can find some of the finest donuts that have ever been produced from a shack in a gas station parking lot.  With a coffee, a cherry crueller, a toasted coconut donut, and three dog cookies in hand we continued our journey east. On a side note, I LOVE that they keep a stash of cookies at Skylight Donuts for the dogs. It’s close to a dog park too but since King isn’t ready to be in a park yet, we stopped for a quick walk along the Lakeside Trail straight down Highway 57 from Skylight.

I had decided that we would take a short drive to Prince Edward County (AKA The County) since it met all the criteria for a little day trip: it was only a few hours away, there would be easy access to Lake Ontario so the dogs could swim, and I knew that we would be able to find at least one place to stop for a visit.  That one place was Three Dog Winery.  Of course we’d end up at a winery or brewery.

When we walked inside the tasting room, all eyes turned to the dogs and they were soon swarmed by their new fans.  There were pats and coos and photos taken while stumps and butts and tails furiously wagged.  I just stood there and untangled the leashes as needed.  Let’s face it: they’re the superstars of our little ragtag group of misfits and I’m okay with that.

Finally the crowd dispersed and I bellied up to the counter for a sampling of the wares.  For a small winery, there were several different wines to choose from but until the dogs get their licenses or we get a self-driving car, I had to exercise restraint.  I sampled the Pinot Grigio and Bacchus (which is a Meritage and named after one of their dogs!) but my favourite was the Dog House White, a blend of Vidal and Riesling.  Luckily, or perhaps unluckily, the Dog House White is now offered at the liquor store so I can get it all the time instead of having to drive three hours.

I had initially planned to stop for some wine and then leave to do some easy exploring around The County. Then a band started to play and rather than rush on, I thought it would be nice to settle for a little while, let the dogs enjoy the laid-back crowd, and have a wood-fired pizza from the outdoor oven.  When the woman who had been helping me wrote up my tab, she even put “3 dogs” next to my name.

In no time, I had a pizza in front of me, a glass of wine in my hand, and all three dogs spread out around me.  When the band started playing “What a Wonderful World” I couldn’t help but sing along as I just enjoyed the moment.  I know it’s something that I don’t do often enough, where you put everything aside and just be. I still get goosebumps thinking about it.

After we destroyed the pizza (yes all of it), we went for a short walk through the vines.  For the first time in a long time, it was quite warm so we did not go far; just far enough to stretch our legs and let the food settle.  Well-fed and well-rested, we climbed back into the car.

I almost drove right by Sandbanks Winery since it’s on a bend of Highway 33 but THAT was the winery I was looking for and it’s across from the road that I was looking for.  Sweet.  I made the turn and started driving.  And driving.  And driving some more.  Odd…I don’t remember the road being so long…Am I mixing up different roads?  Is there another road across from a winery that leads to the lake?

After what seemed like an eternity but really wasn’t, we reached the end of the road and our destination.  Yes, this was the place I had in mind.  I unloaded the dogs and we made our way through a short stretch of forest until we reached a rocky beach.  I let Jack and Leo off their leashes and replaced King’s leash with a longline so that he could play.  He is getting better with his recall but not better enough that I trust him off-leash, especially since I saw some people and a dog far down the beach ahead of us.

The dogs all ran to the lake and splashed in up to their bellies with Jack actually sitting down in the cold water.  I started throwing sticks for Leo who dove in after them with wild abandon.  King tried to run after one stick but he hasn’t quite figured out the whole swimming thing yet and he sank like a stone.  Then he figured out that he could let Leo get the stick and then try and take it from Leo.  He tried.  He failed.  Jack was content to sit on the sun-warmed rocks and leave the puppies to their antics.

Eventually the play died down and we made our way back to the car.  Since the dogs were soaked, I thought it would be uncomfortable for them to put their harnesses on until their coats had dried out.  Needless to say, King made the most of it: I snuck a peek into the back seat to check on them and saw that King had wrapped his front legs around Leo and they looked like they were snuggling!  My first thought was “Poor Leo!” and I was about to chastise King until it dawned on me: Leo has never had a problem telling King to back off and if he wanted to get away, he could have easily done so.  Which meant that Leo wanted to cuddle. Cuteness level on overload.

As we left the lake behind, I toyed with other places to visit or things to see but then a sudden wave of exhaustion hit me and I wanted nothing more than to go home and snuggle up with the pups.  A busy week at work had left me sleep-deprived and now it was catching up with me with a vengeance.  So after driving three hours for pizza, wine, and a swim, we headed back home.