I was tempted to ignore the alarm and stay in bed and I don’t think the dogs would have minded one bit.  After we had gotten in a little bit more snuggle time, I climbed out of a nice warm bed and began to pack up.  I decided to treat the dogs to breakfast in bed but they didn’t seem to be terribly hungry.  I, on the other hand, was and I made use of the wifi to track down Kekuli Cafe a short distance away.

I walked in and was instantly in love.  The space was airy but cozy with works of art from First Nations artisans on the walls.  And then my attention was captured by the display of bannock.  Now I had never had bannock before so I was really excited to finally get my paws on some.  After breakfast of course.  I ordered the bacon breakfast bowl (hash browns, 2 basted eggs, Kekuli cheese sauce, fresh pebre salsa, and bacon), a plain bannock, and asked the woman working there to surprise me with another one.  Oh and an americano of course.  With a bag full of goodies, I returned to the car and we drove to a park down the road away and I made short work of the bowl.  I didn’t realize that my bowl came with a bannock but I was not upset that I had two plain ones as they were so good.  It had a yielding crust with light interior and just a hint of sweetness.  Where had I eaten something that I had described the same way?  I racked my brain as I shovelled forkful after forkful into my mouth.  Of course!  Beignets!  They reminded me of the beignets I had eaten in New Orleans.  Oh and in case you were wondering, she surprised me with a skor bannock.  Soooooooooo goooooooooooood.

I practically rolled out of the car as I brought the dogs out for a proper walk in the small park.  We were walking next to a small river when I noticed a wallet laying out on the grass.  There were plenty of pieces of identification inside so once we had finished our walk, we drove to the local detachment of the Royal Canadian Mounted Police.  I have never had more contact with mounties than I have on this trip.  I dropped the wallet off to the woman working the front desk and as I was about to leave, I had a sudden idea: could I take photos of the dogs with some of the cars in the lot?  When I was told that would not be a problem, I hustled out to the car and started posing the dogs.  It just happened to be shift change so we ended up getting a bit of attention by the officers returning to the detachment, which the dogs didn’t mind at all.  Once I was able to drag them away from their new best friends, we walked to the park next to the detachment and I let them go for a real run.  Fortunately Piper was content to toddle along and sniff everything instead of running around like a nut job so everyone could have some off-leash time.  Then it was back to the car and on the road. 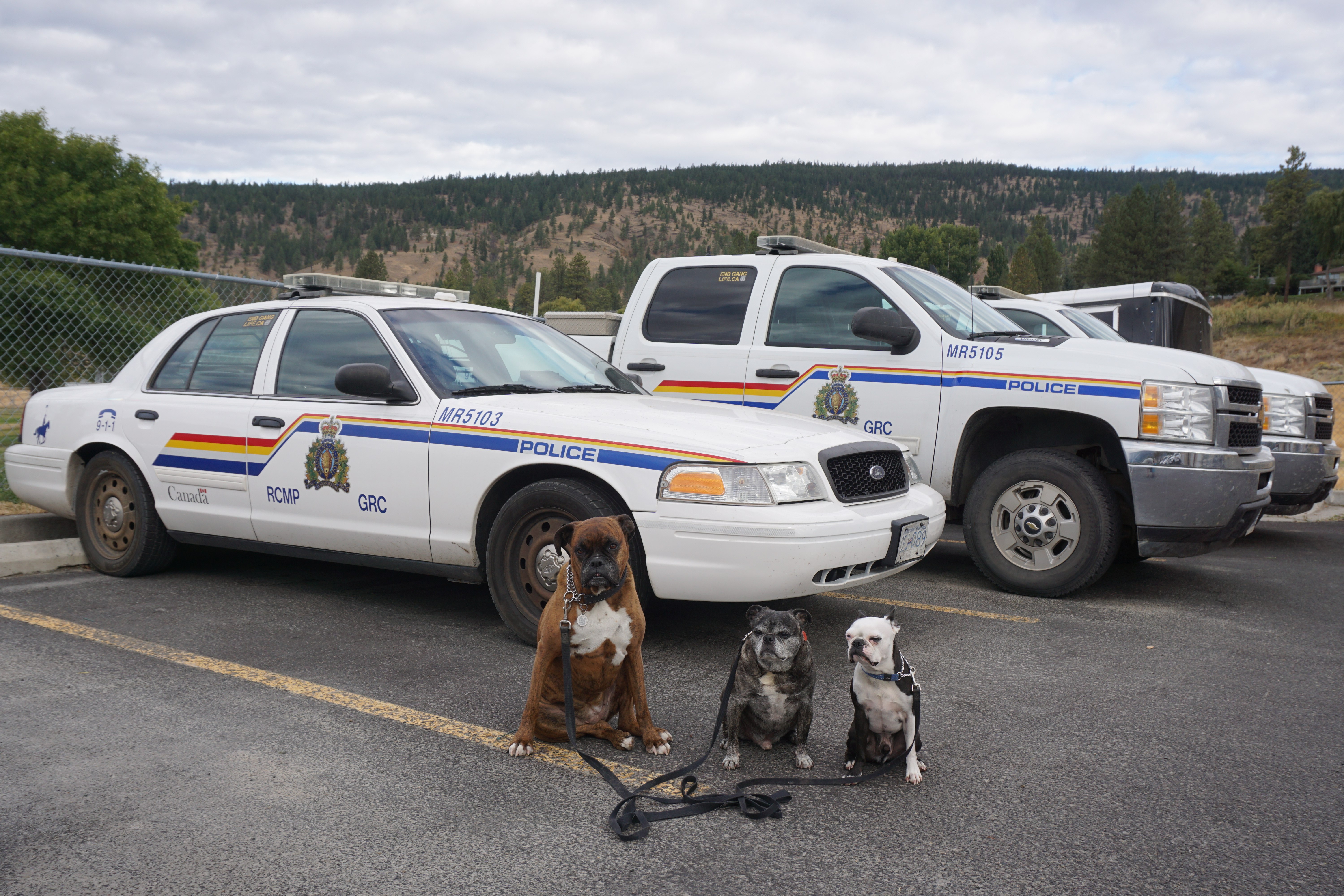 We found ourselves back on the Trans-Canada Highway 1 and into rain.  This time however, the sides of the mountains around us had a liberal dusting of white.  We had just driven through.  What a difference a couple of days makes! 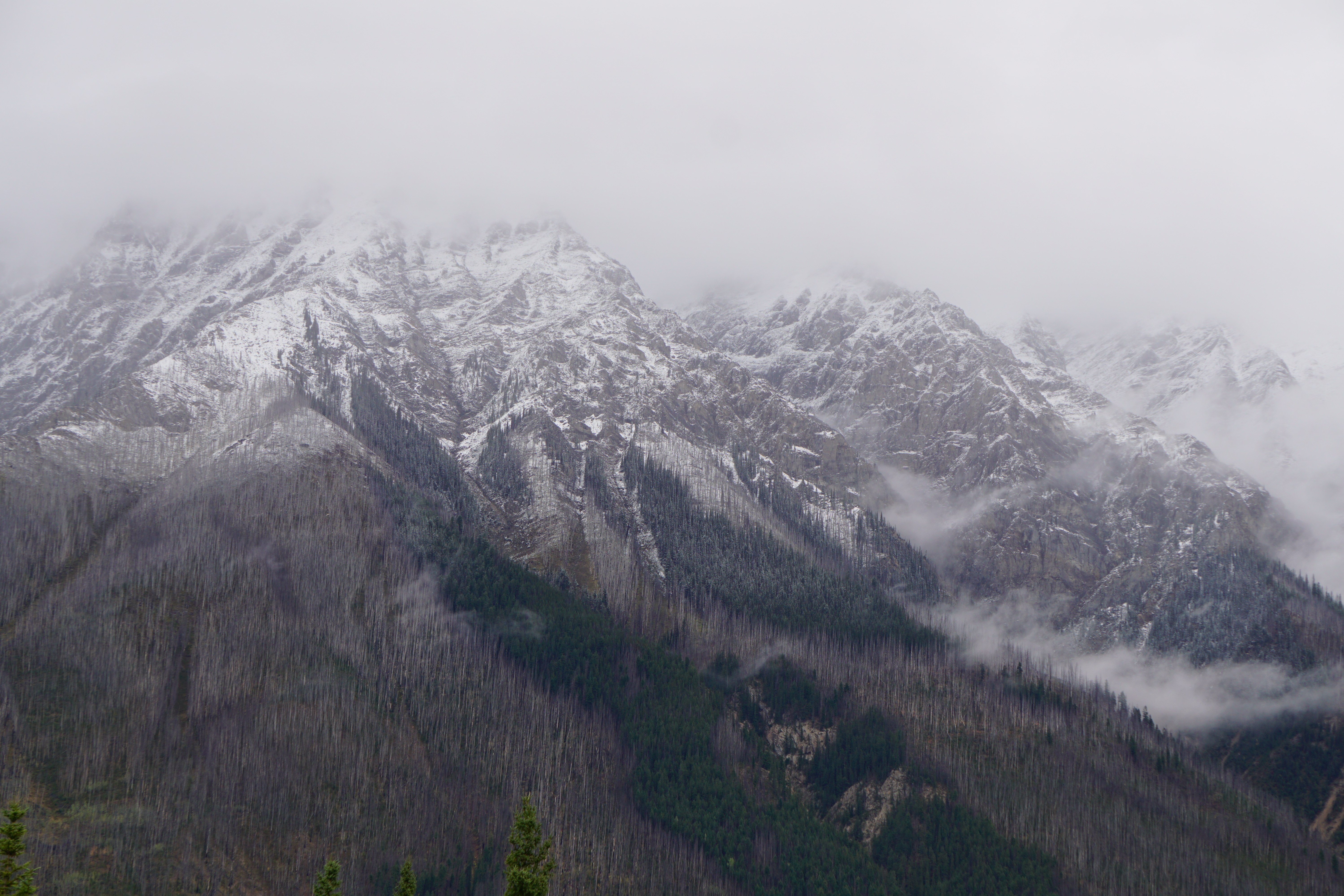 As we approached the town of Revelstoke, I noticed something that I hadn’t clued into before: signs for Mt. Begbie Brewing Company.  A brewery huh?  Perhaps it was time for a break.  To stretch Piper’s leg of course.  Not knowing if they were dog-friendly, I jumped out first to find out.  Unfortunately, dogs are not allowed because they want to prepare food.  I was going to point out that they are currently in the midst of renovations and likely not preparing food right now.  Those same renovations were the reason why I could not sample any of the goods.  Well that’s a downer.  I picked up some of their High Country Kolsch, the Tall Timber, a cream ale, and the Confederation Ale and returned to the car.  Some of it was a gift.  But not all of it.

I had hoped that the rain would stop as we passed back through Glacier National Park so that we would be able to get in some hiking.  Nope, the rain was not letting up.  I could hardly complain about the rain as there were wildfires all through the British Columbia interior.  In fact, one park that I had wanted to go to, Waterton Lakes, had been completely shut down because of the fires.  That was a little disappointing.  So we continued across the Trans-Canada.

I’m constantly reminded how lucky I am to have such wonderful travelling companions.  With few chances to get out into the rain, they all curled up in the back seat and slept.  If the car came to a stop, they’d all spring up eager to see what was going on and if the car started moving again, they would lay back down and go back to sleep.  Amazing. 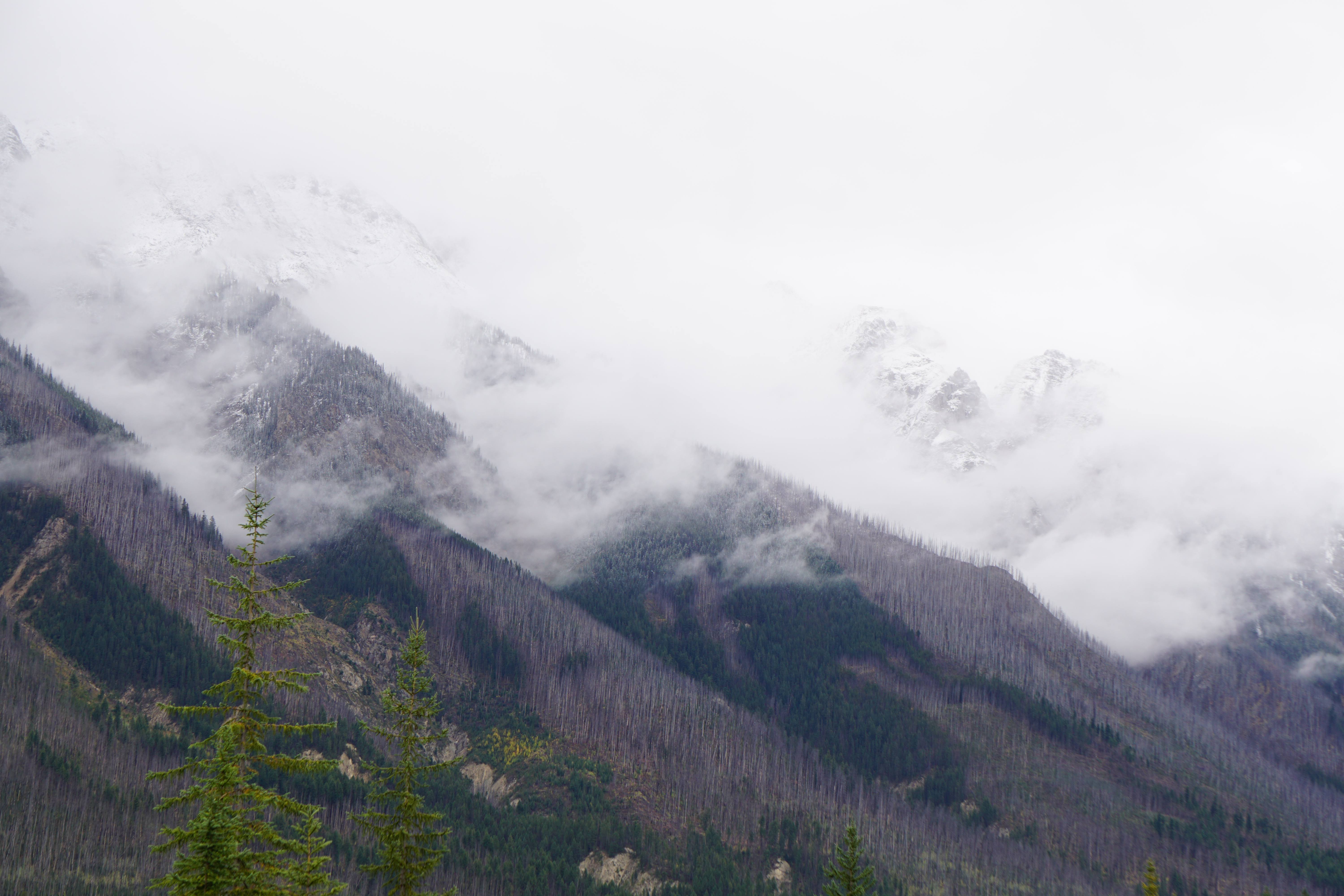 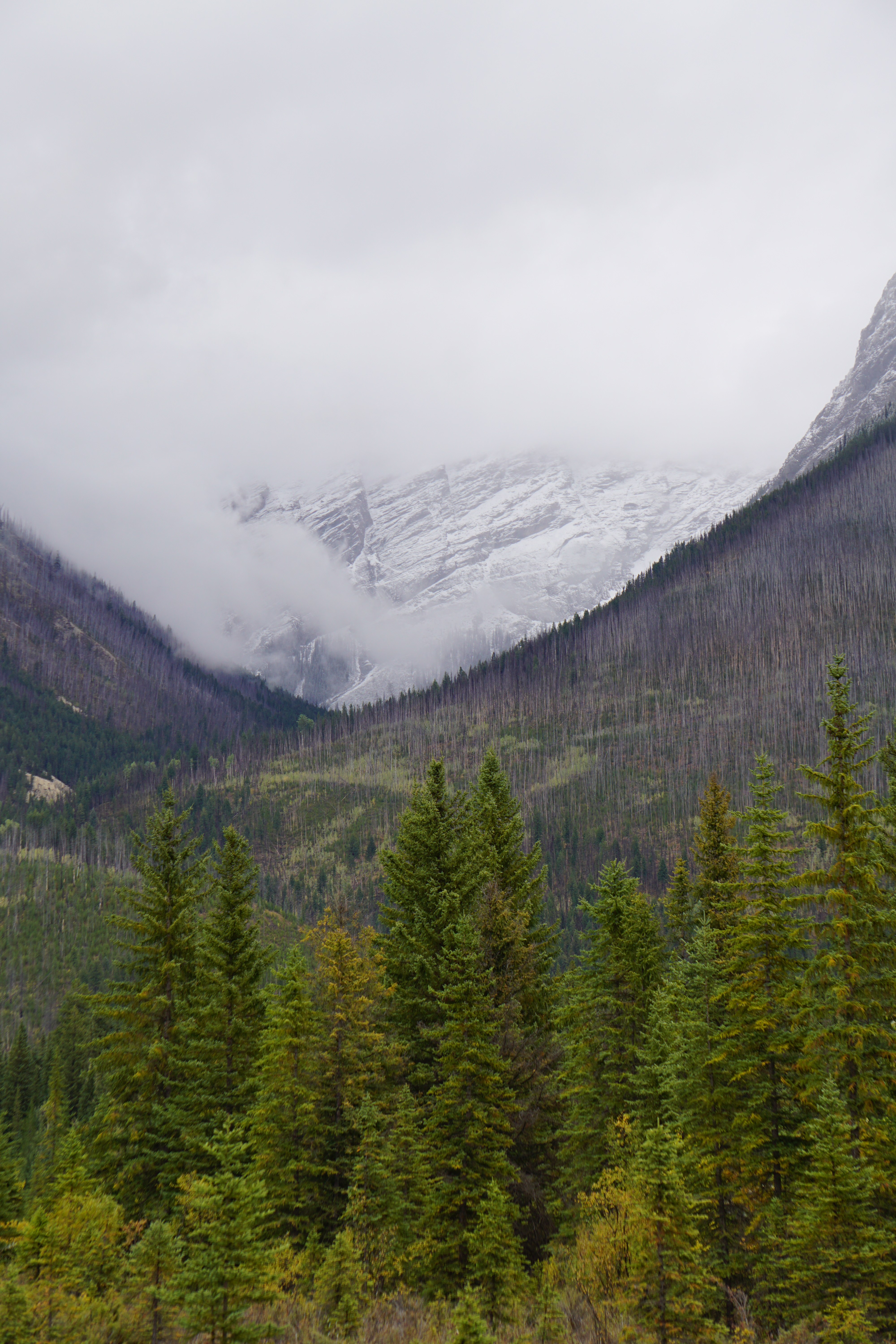 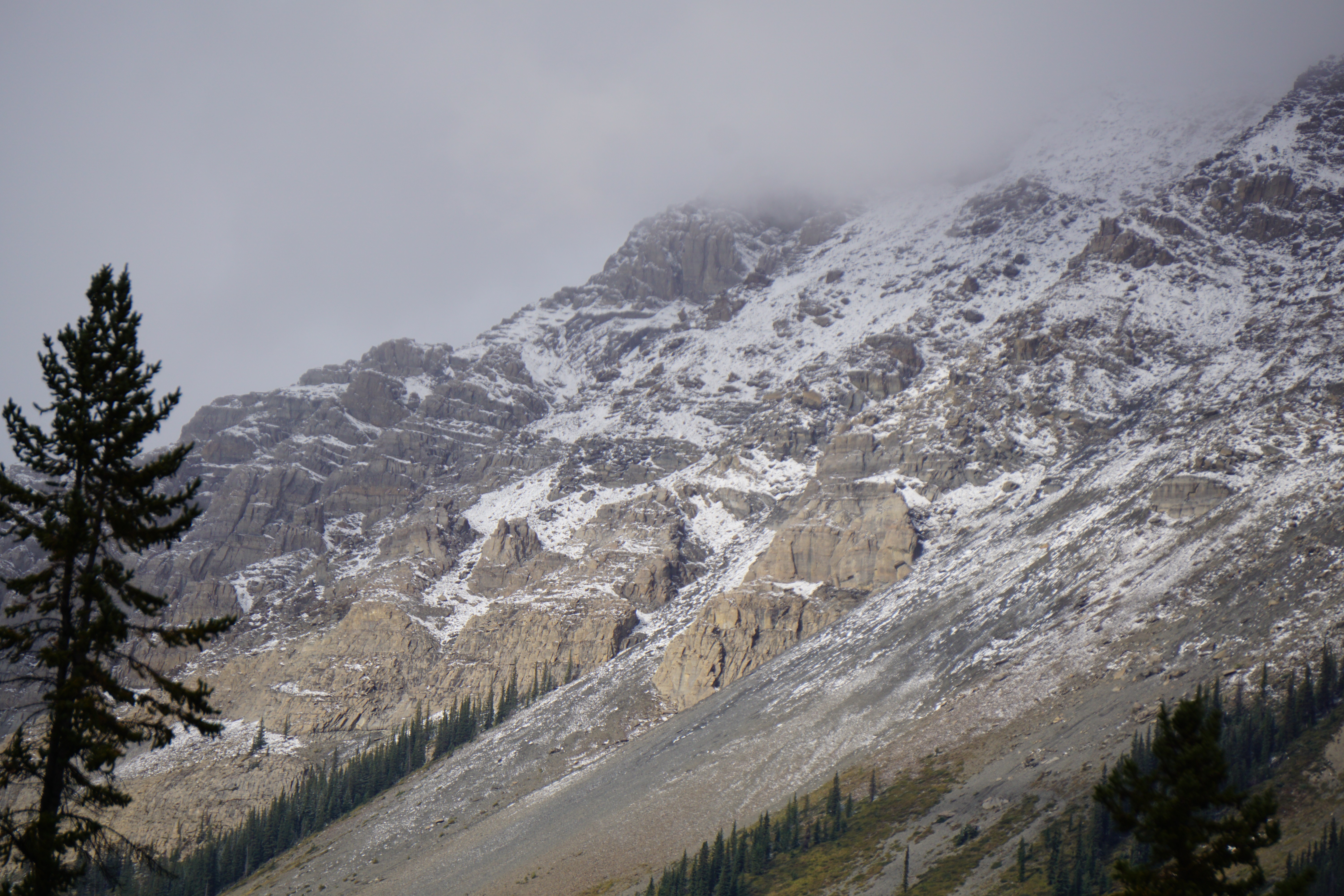 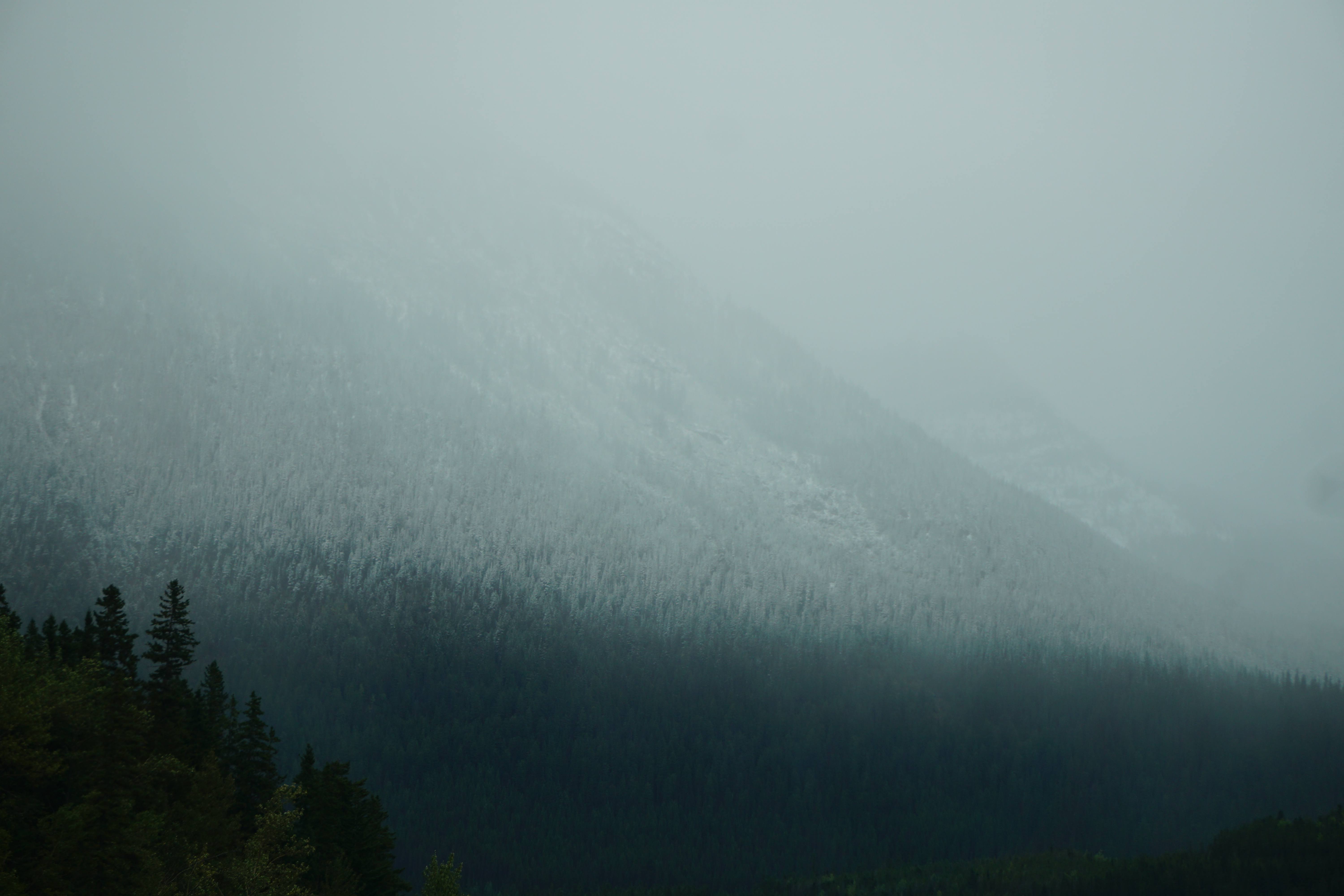 Our walk breaks were just long enough for everyone to have a quick pee and then back in the car.  During one of these brief stops, I was able to book an Airbnb in Lindon, Alberta.  I had considered taking up our hitchhiking friend on the offer of a place to stay in Calgary, but I had somewhere else in mind that was farther north, seeing as how Waterton Lakes was out of the question.

Lindon is a small town and with the rain and low lighting, I had a hard time finding our Airbnb.  I called our hostess, Christine, only to be told that I was sitting outside it.  OK so I wasn’t as lost as I thought.  After introductions, she insisted that my dogs meet her dogs.  It went very well and everyone got along although one of them (I can’t remember which one) had a total boy crush on Jack.  The poor old man always seems to get the attention.

We went down to our room in the basement and after a long, hot shower to get the last of the cold dampness out of my bones, I fell into the most comfortable bed I have ever crawled into.  Seriously, I fell asleep trying to figure out how I could strap it to my car without being seen.  The dogs obviously shared my opinion as they were asleep faster than normal.

4 response to "Bannock, Mounties, and Beer"