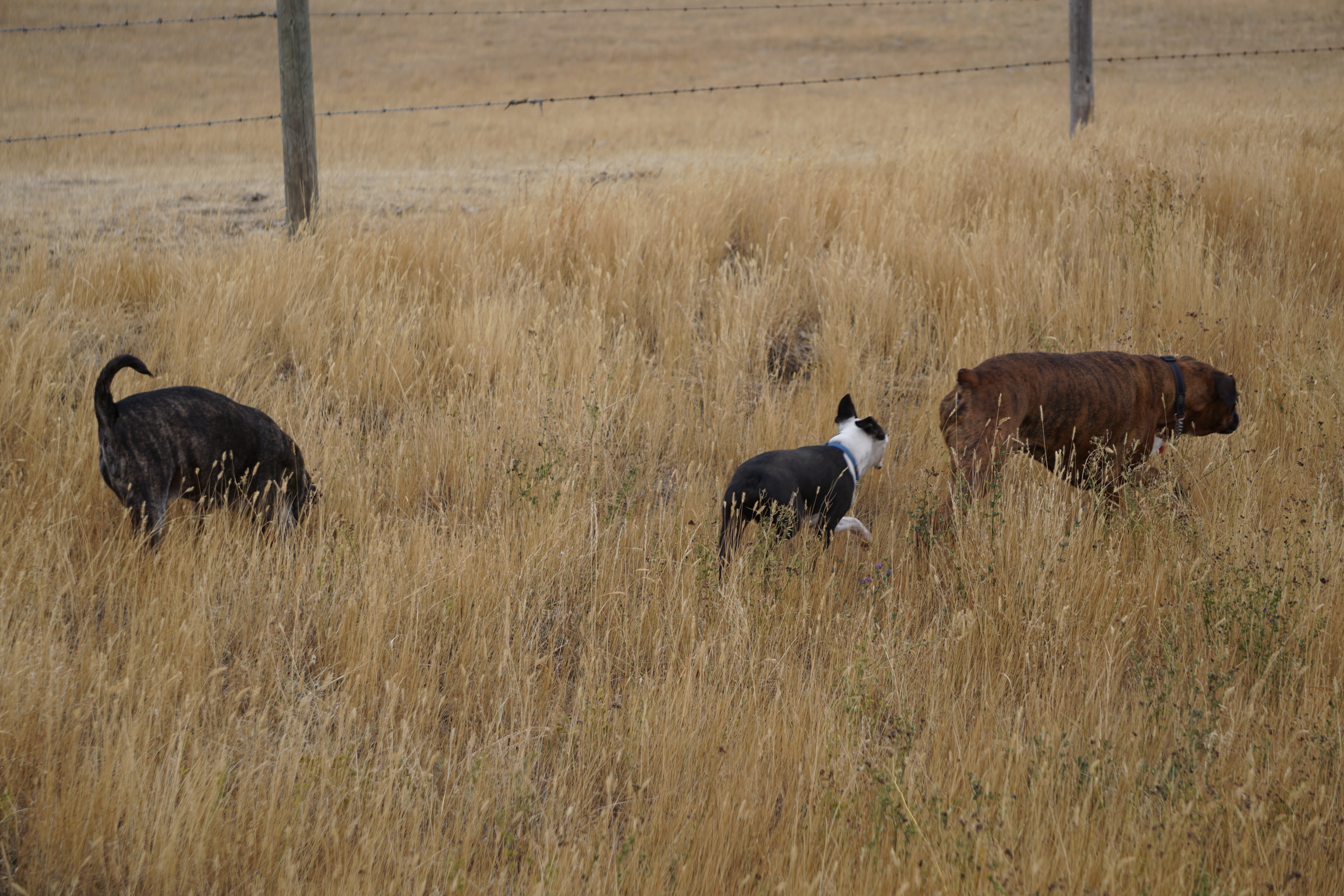 This was going to be a long day so we were up with the sun.  I was tempted to cook something for breakfast but our site did not have a table which meant my stove would have been resting on the dried grass and with the high winds, fire and grass are a bad combo.  I suppose I could have moved the stove so that it was on the narrow road through the campground but that meant being away from the shelter of the berm.  Given the chill from the winds, that was not an option with the dogs and I had to practically push them out of the tent to pack up.  They waited in the car and enjoyed their breakfast while I broke camp and then we were off, continuing our drive along the Ecotour Road.  I paused just long enough to chat with some of our camp neighbours who turned out to be a retired couple that ran photography tour groups.  Hmmmmmm you better believe I still have their business card.

The bison that strolled across the road soon after leaving the campground proved that yesterday’s sightings were not a fluke and our drive was brought to a halt as we waited for the entire herd to walk by.  They were so unconcerned that a young bison stopped to nurse in the middle of the road.  It would have been a great photo opportunity had it not been for the van in front of me. 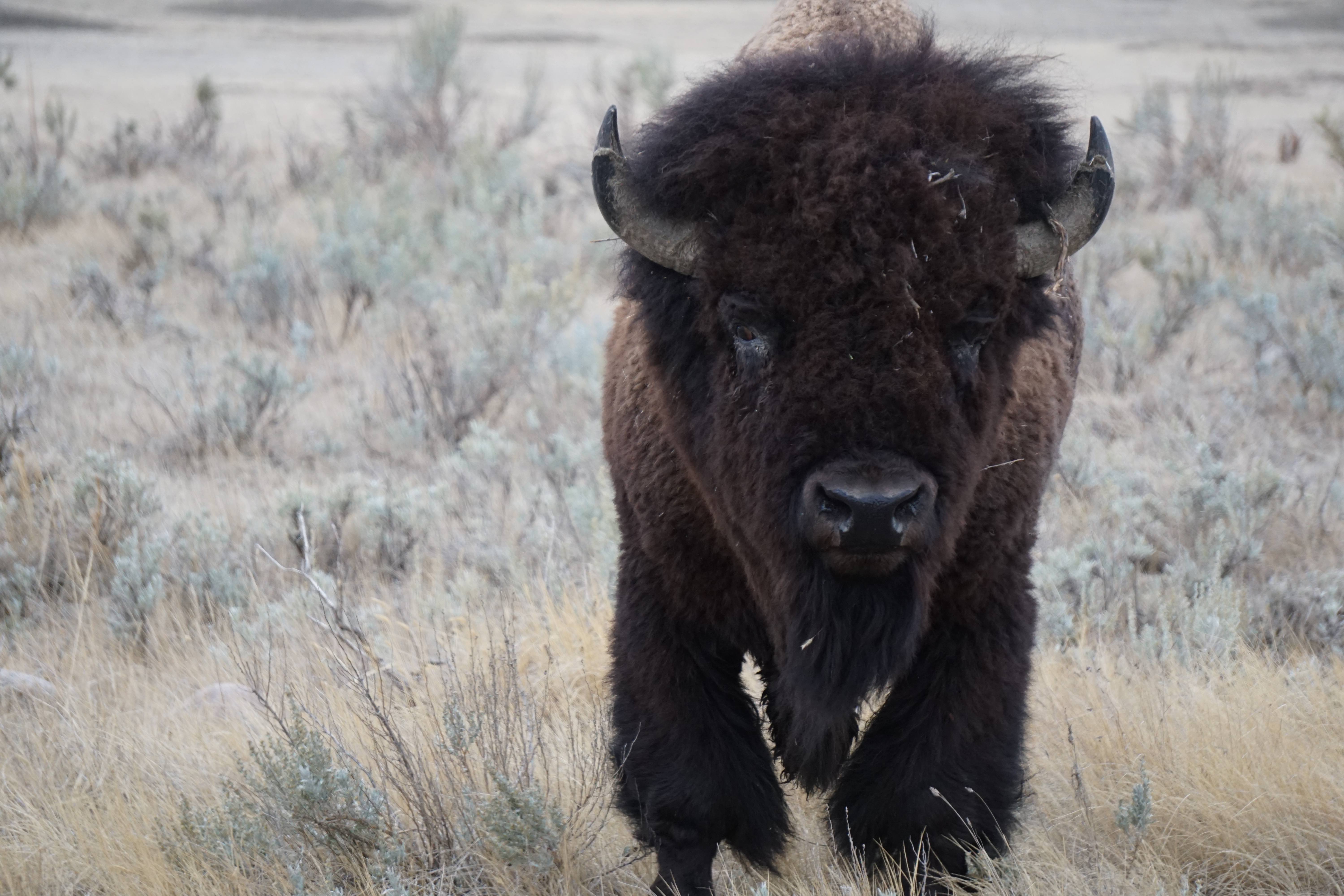 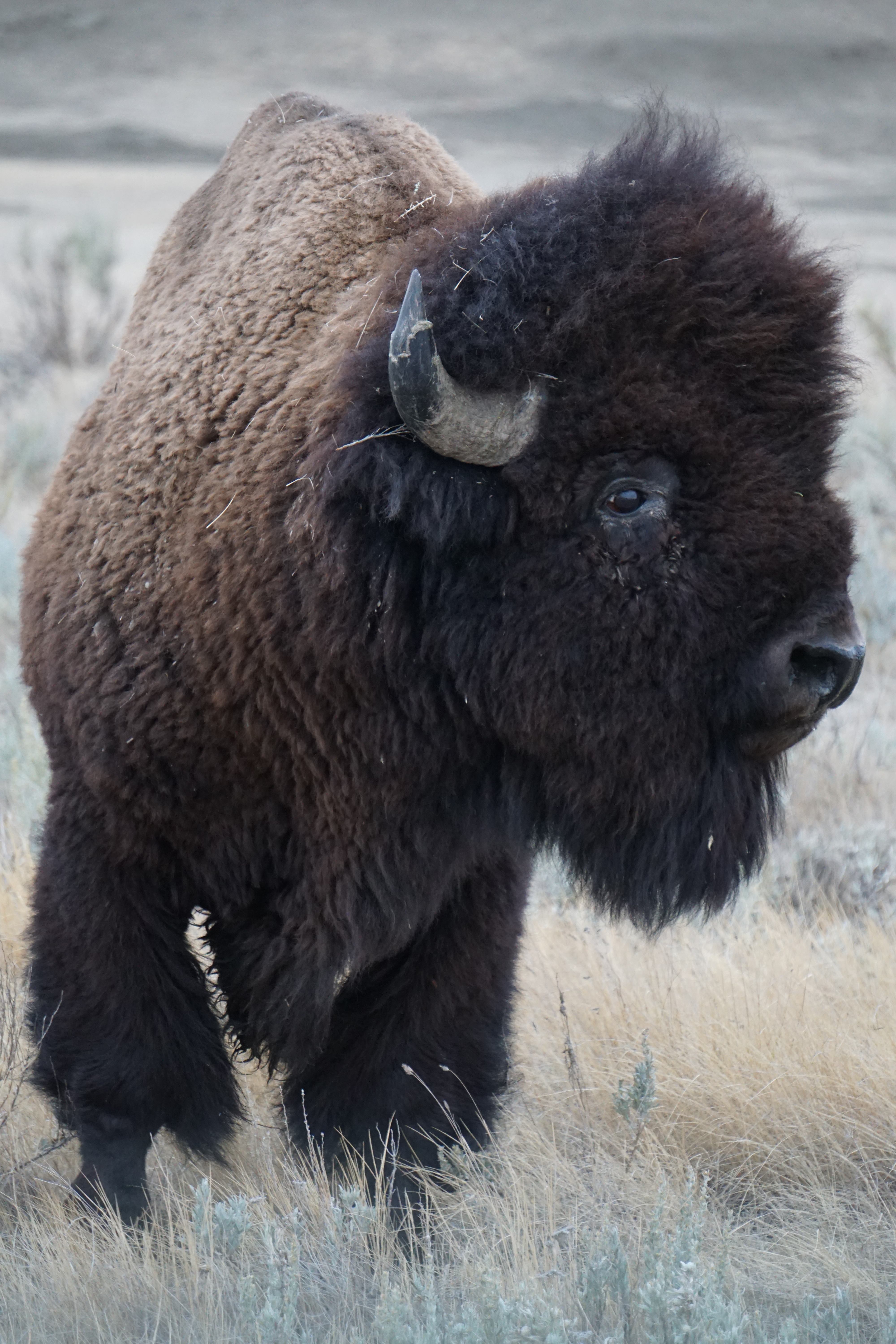 As we were about to cross the boundary out of the park, I saw an observation point with an interpretive plaque that would have been nice to read if not for the large bison standing right next to it.  That’s ok.  I’ll do my learning somewhere else.

Upon leaving the park, I had two options: continue north to the Trans-Canada Highway and then drive east or take smaller backroads east.  The Trans-Canada would be the easier route to follow but according to my map it would have taken slightly longer, however with a somewhat lead foot (ahem), I have no doubt that I would have made up the difference.  Having said that, I’ve driven the Trans-Canada.  It’s a highway with highway sights and sounds and I’ve spend enough time on highways this trip.  No my road trip warrior friends, we were going to take the back way.

At first I thought my map was playing a joke on me, since the road we travelled after leaving the park seemed to take us through farmer’s fields.  I found myself surrounded by yet another herd of bovines; this one of the domesticated sort.  I crept along the narrow road, sending cows dashing to either side as I listened to the whines and yips from the back seat.  I wonder what Leo would have done if I had let him out of the car.  Jack and Piper would go running up to their new friends but Leo has never been around anything larger than a Great Dane.

We finally emerged from the cow fields and onto a proper road.  It was a narrow dirt road but finally I felt like I wasn’t trespassing.  I happened to look to one side and saw what I think is a prong-horned antelope.  I had missed the chance to get a photo of one the day before but you know I snapped enough photos to make up for it before it got tired of being a model and moved away.

We drove on, stopping at random places so the dogs could stretch their legs and Leo could roll.  The good thing about taking the back roads is that there are plenty of places to stop and just let the dogs out as long as there was no livestock or wildlife and it seemed that they were content with lots of little breaks. 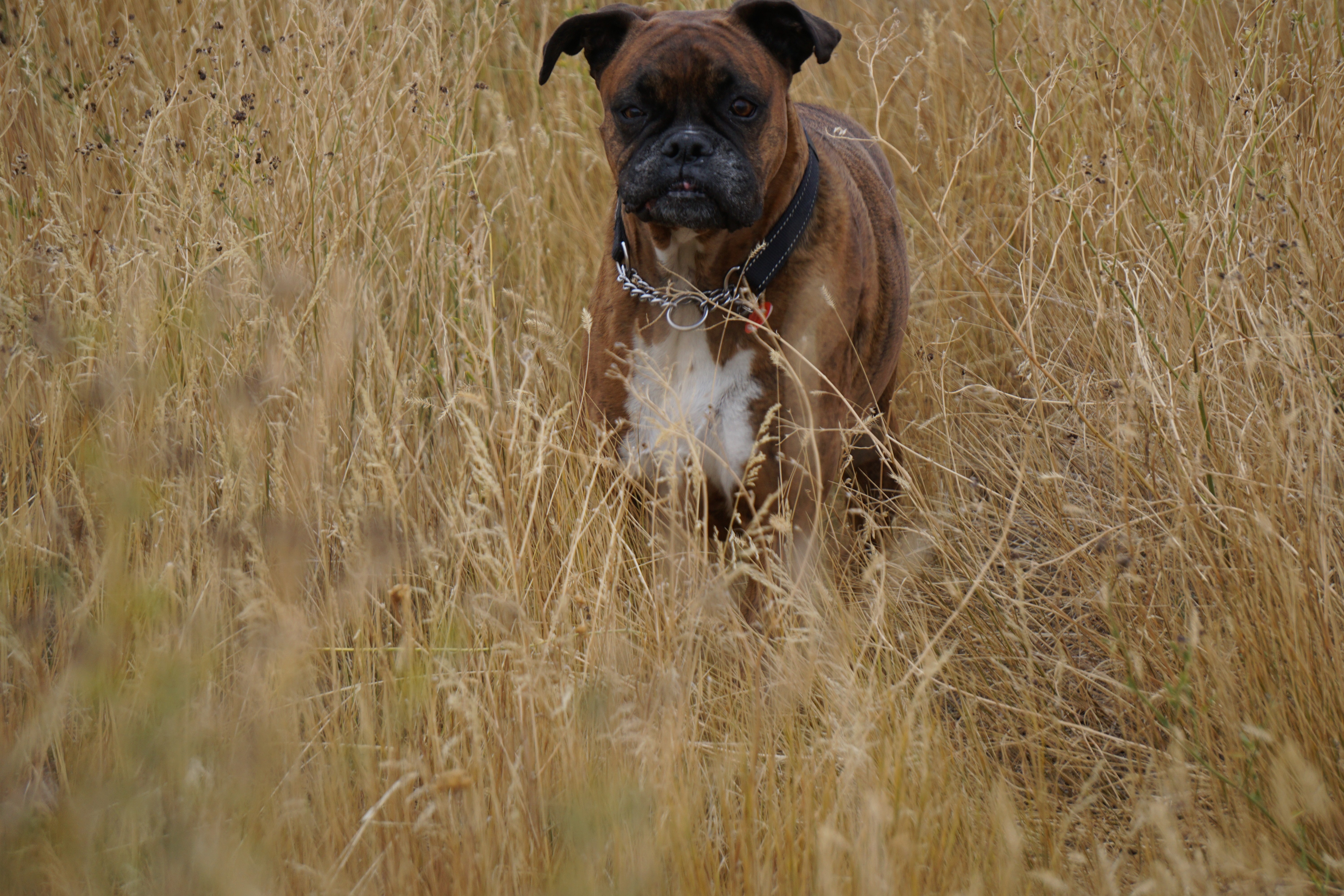 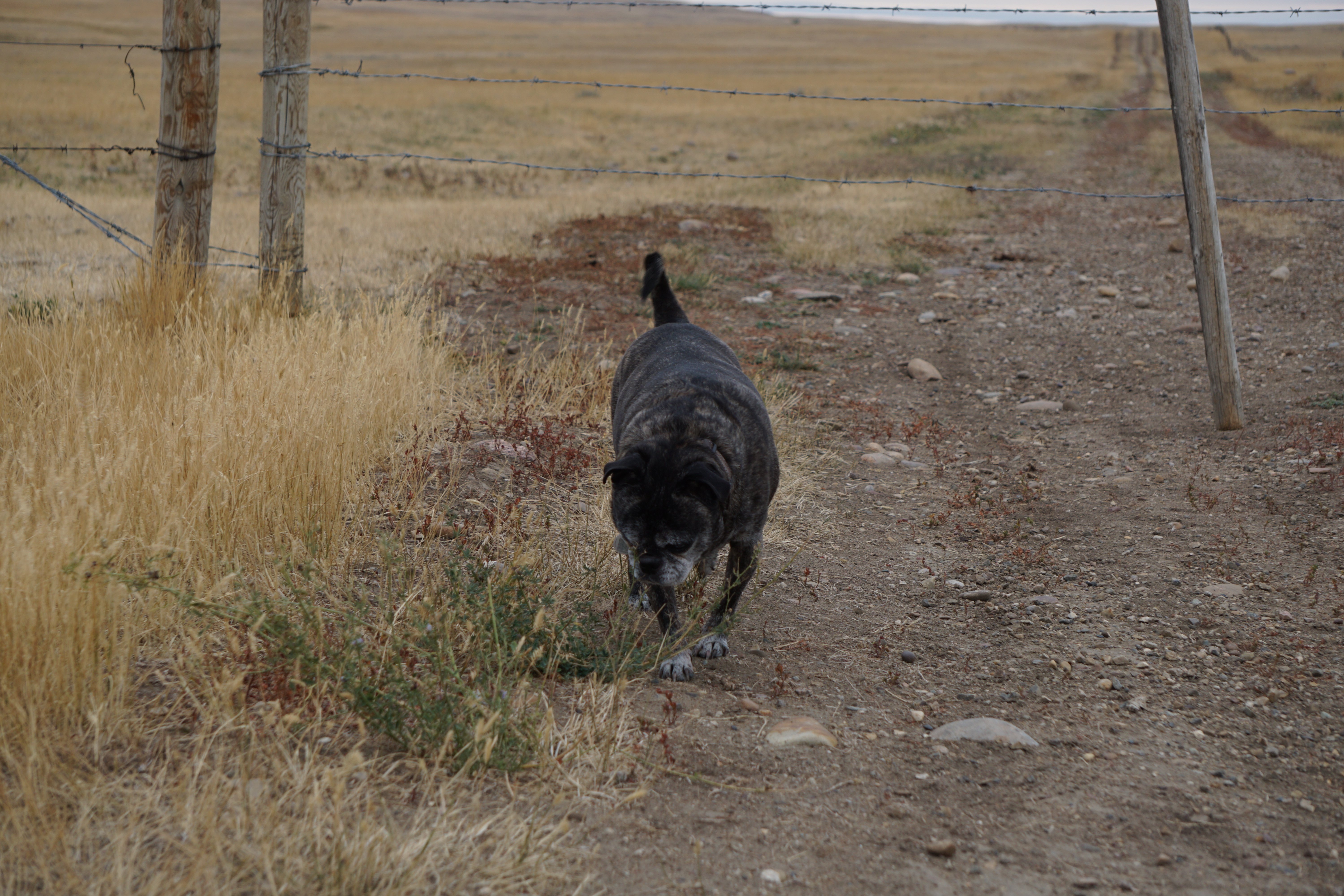 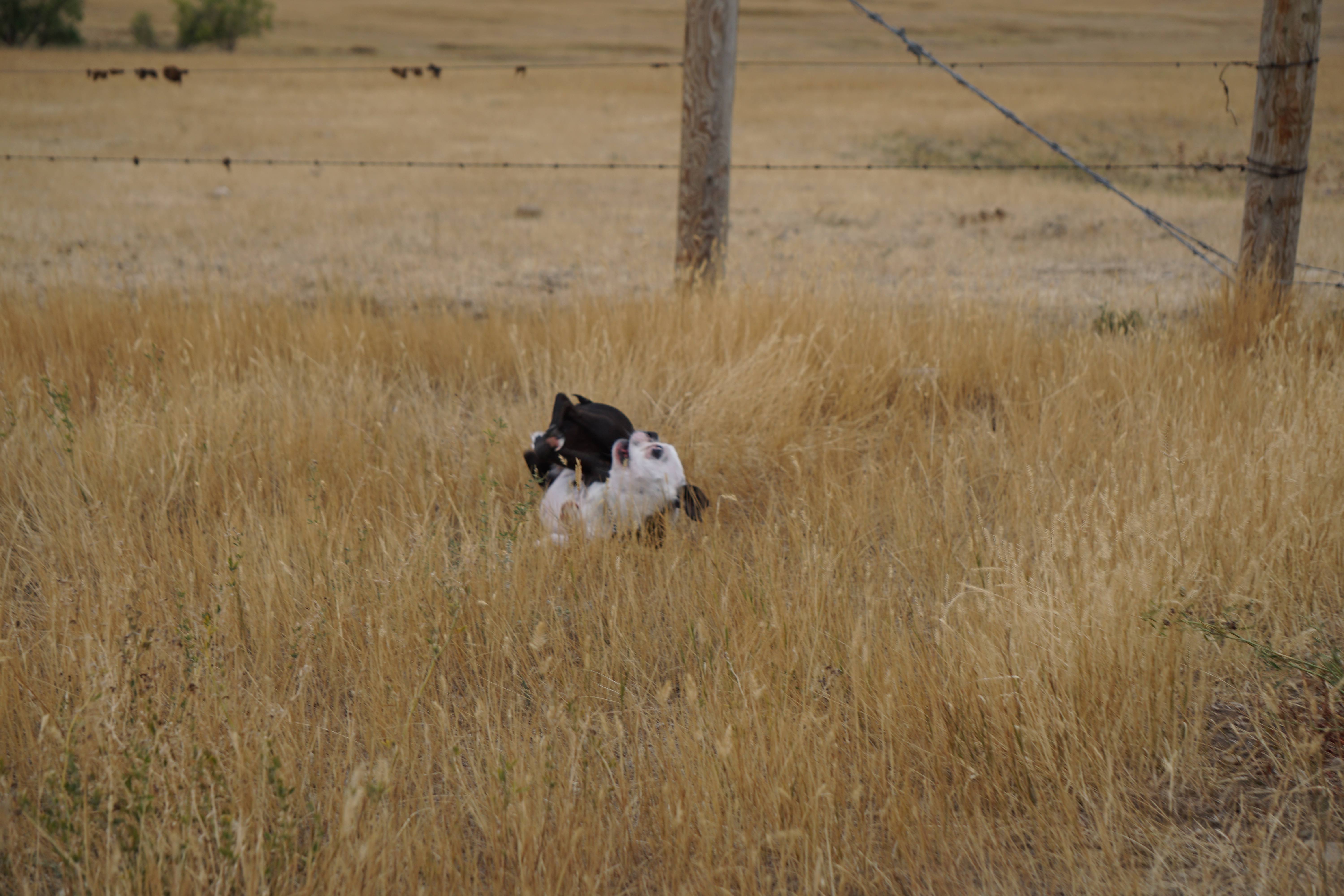 Now one problem with taking the back roads is that it can be hard to find places to eat in the small towns.  You know that there has to be at least a tiny diner in there somewhere but it’s usually not on the side of the highway so you have to leave the road and then wind through even smaller roads  to hopefully find something.  As a result, it was several hours before I was able to find my breakfast.  Assinaboia is one of the larger small towns and I stumbled across Nash’s Lounge.  I perused the menu that was handed to me and ordered a lamb gyro with fries and a coffee.  As I had been distracted with food and needing to use facilities, I hadn’t noticed the big white board that had the breakfast menu as soon as I walked in.  Whoops.  Oh well.  Gyro for breakfast is not the strangest thing I’ve started my day with.  At least I don’t think so…Wanting to make up for the stop, I decided to eat the gyro as I drove.  Unless you like wearing tzatziki sauce, I don’t recommend you try this.  Fortunately it all landed on my pants.  And shirt.  It was a very tasty gyro and the tzatziki was nice and garlicky.  The fries had a great crispy crunch.  The coffee was average drip.

It seemed as though bad weather was following us and we ended up driving through several small patches of rain which not only slowed us down and curtailed walk breaks but also seriously cut into picture-taking.  Fortunately the rain had stopped when we were in Weyburn, Manitoba.  What was so fortunate about that?  Oh just a little off-leash dog park that we found.  I’m not used to small towns having dog parks so this was a great little find.  Even though the dogs had spent most of the day resting between little outings, they were content to calmly sniff around the park.  Well Leo sniffed around at a run, Jack sauntered and then plopped down next to the gate, and Piper stayed with me as I walked a few laps around the park.  The park consists of two fenced in areas with one for larger dogs and a smaller side for puppies, older dogs, and small dogs.  There wasn’t much for cover so in the summer and winter I imagine it would be wide open to the elements but on a rainy day in September, it was just fine. 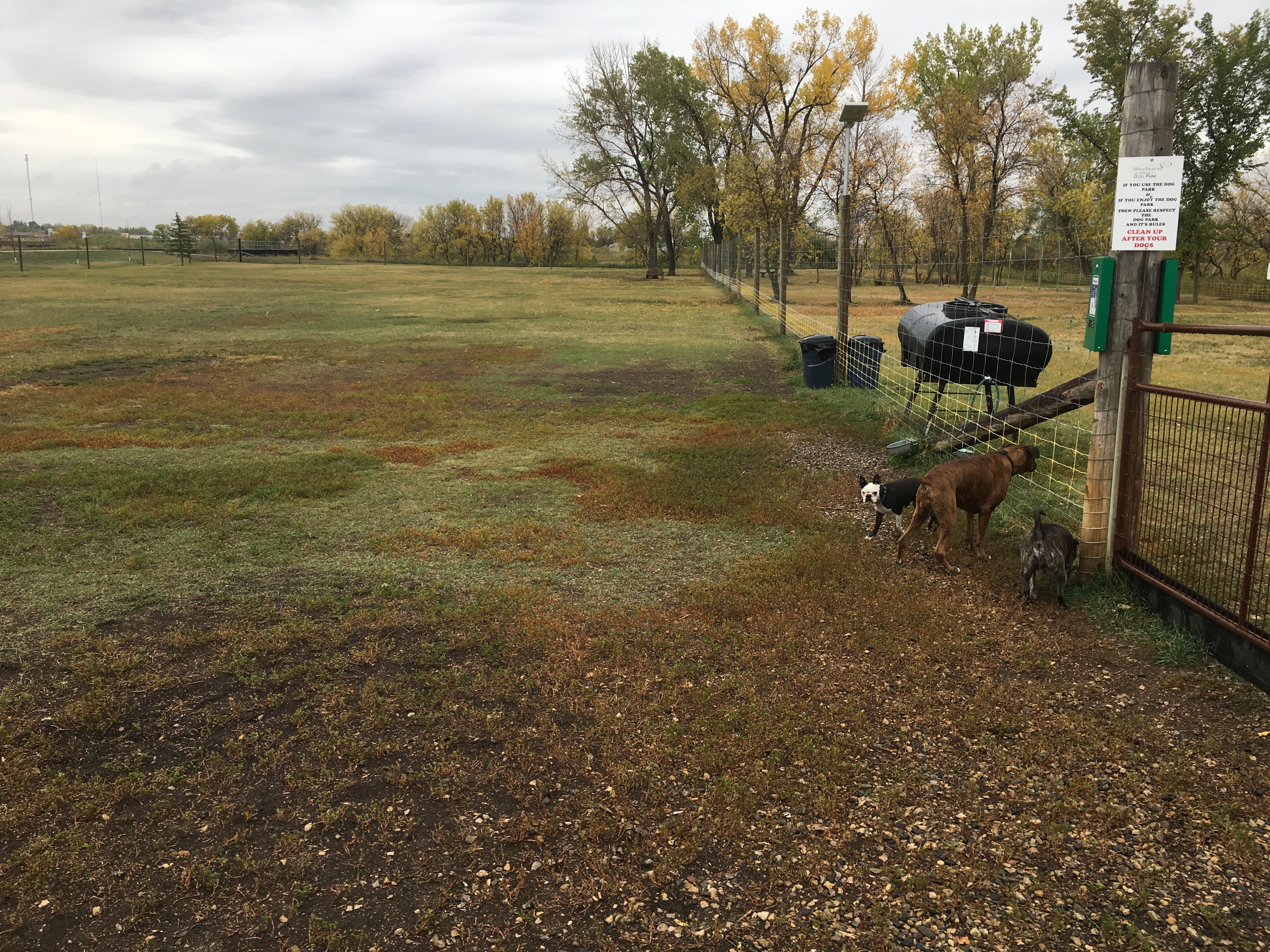 The plan was to drive to my grandparents cottage that night.  I had hoped that I would get in before dusk since the area has a significant deer population.  I also told myself that if I was going to get there before it got too late, then I wouldn’t even try finding a place to stay.  With the forecast calling for some nasty rain and high winds, camping just wasn’t an option.

Let me tell you: I am glad I didn’t even give the tent a thought because when the rain and wind came, it came hard.  My little car was buffeted and there a few times when I considered pulling into a parking lot to wait it out.  If I could have found a lot.  Back roads.  Poorly lit back roads with no safe place to pull over.  Backroads that seemed to get narrower and more remote.  The effect could have been accentuated by the low lighting since my headlights were the only illumination around.

The rain was brief but it was devastating and I had to steer around fallen limbs and even an entire tree in the road all the time wondering just where on earth I was.  We emerged from the storm but it never strayed far and I was able to watch lightning off to my left as we continued on.

I kept my eyes peeled for deer, hoping that they would all be taking shelter and would wait until morning before being another obstacle in the road.  Or whatever was passing for a road.  Seriously at one point I think we were driving down a dirt trail.

Finally, we ended up on paved road and I started to see familiar landmarks.  That in itself is such a relief because up until that point, I had no idea where we were.  I didn’t think that we had taken a wrong turn because there hadn’t been any for a very long time.

My grandma was still awake when we got in.  The dogs knew exactly where they were when we parked and ran out of the car to see her as soon as I opened the door.  It amazes me that they can remember it so well when there is so much time between visits.  This year was a bit different since we had been there in May but every time it’s the same greeting.  Piper even starts whining when we turn down their road.

Once I got the car unloaded, and the obligatory lecture from my grandma about driving at night with all the deer, the dogs all sprawled out in the spots that they have claimed over the course of our visits: Jack on his mounded up blankets, Piper on the love seat next to (and sometimes on) Grandma, and Leo curled up next to me on the couch; when he’s not pestering Jack, that is.  We caught up about the drive and I tried to explain the route we had taken from Grasslands.  Grandma had no idea what the roads were that I had mentioned.  She even got out a map and we tried to figure it out.  I think she wanted to know why I had been taking such a convoluted route.  My shrugging shoulders and “that’s part of the fun” didn’t seem to have her convinced.

Soon the day caught up with me and we climbed into our beds.  The main guest room has two twin beds and you don’t realize how spoiled you are with a king-sized bed when you’re trying to squish onto a twin.  Sometimes the dogs will distribute themselves between the two beds.  Sometimes they don’t.  This was one of the times they didn’t.  Oh well.  At least we had a few days to rest and recover.