We Swam in The Pacific Ocean 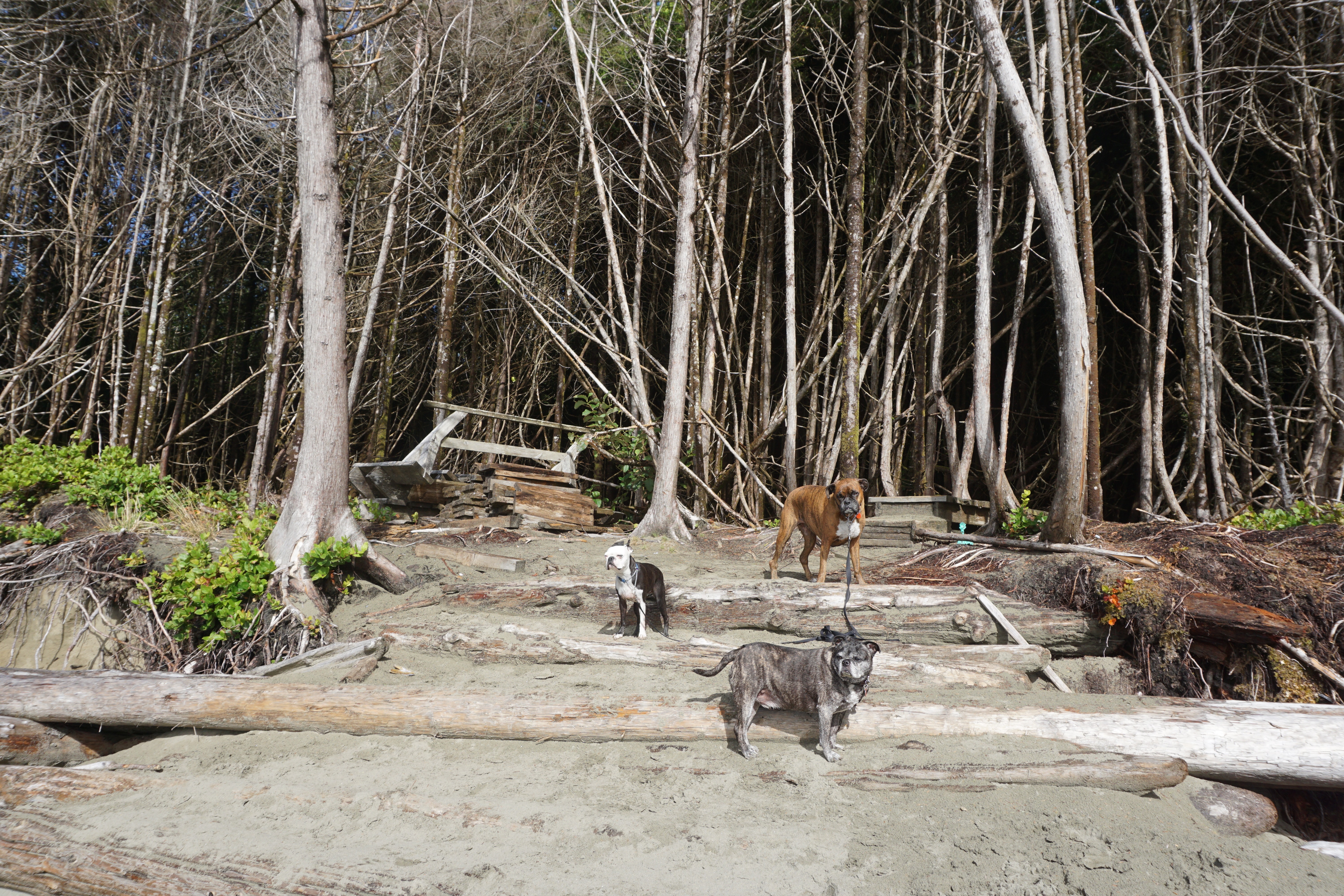 Needless to say, I was up before the alarm.  When I looked out the window, I saw that it was still raining so I guess it was a good that we had a roof over our heads.  I took the dogs outside and almost as soon as they stepped out in the rain, they wanted to go back to the room.  Such divas.  I loaded everything into the car and went to check out and talk to the manager about the pet fees.  Lo and behold, no one was in the office.  Looks like the place is not staffed 24 hours.  Lovely.  I put that on my list of things to follow-up on; after breakfast of course.

We found Coco’s Cafe in nearby Cedar and after pondering the menu, I ordered an americano and the breakfast bowl.  I poked around as I waited for my food and saw that Coco’s is a co-op that provides training, employment, and socialization for persons with developmental disabilities.  It made me feel good about being there since I wasn’t just suporting a small business but one with an actual mission statement.  And the food?  Amazingly good.  So good that if I lived closer, I would likely be there at least once a day.  The breakfast bowl had potatoes, fried onion, sausage, eggs, cheddar cheese and a hollandaise sauce.  Excuse while I wipe the drool off the keyboard for a second.  I almost forgot the coffee for the food.  Almost.  I sat in the car in the parking lot and devoured it without coming up for air.

Very full and very happy, I drove across the island until we arrived at Pacific Rim National Park and stopped at Combes Beach.  The trail to the beach was draped with thick mats of lichen and a deep carpet of moss covered the ground and trees and it felt like we were in a hushed cocoon.  The last time we had been there, we were the only people for miles.  This time we were not so lucky.  With lots of people and dogs on the beach, my dogs stayed firmly on leash which may be for the better anyway since Piper likes to run with the boys in the sand and I was still a little wary of her legs.  The sign at the trailhead warning about wolves grabbing dogs on and off leash was just icing on the cake. 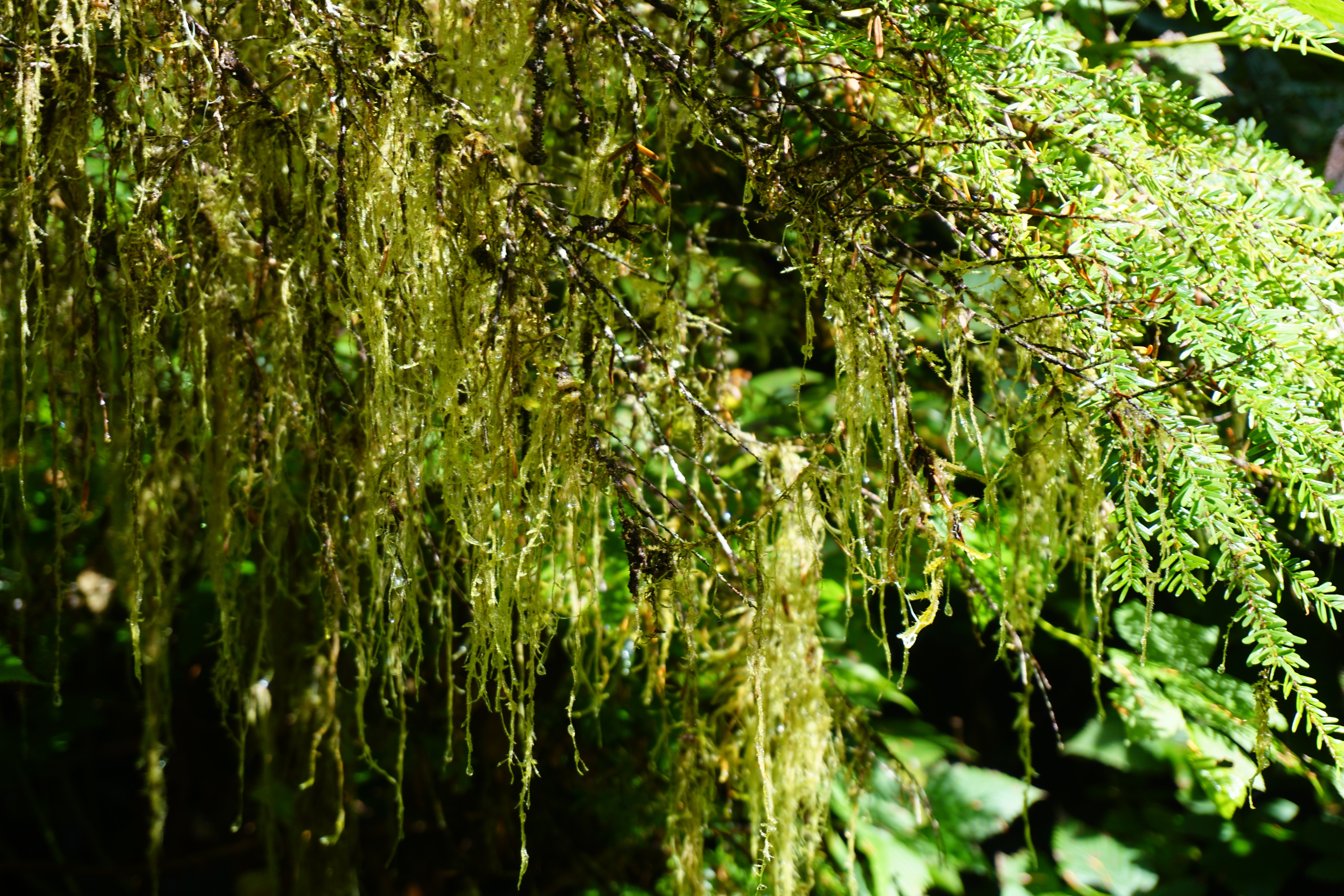 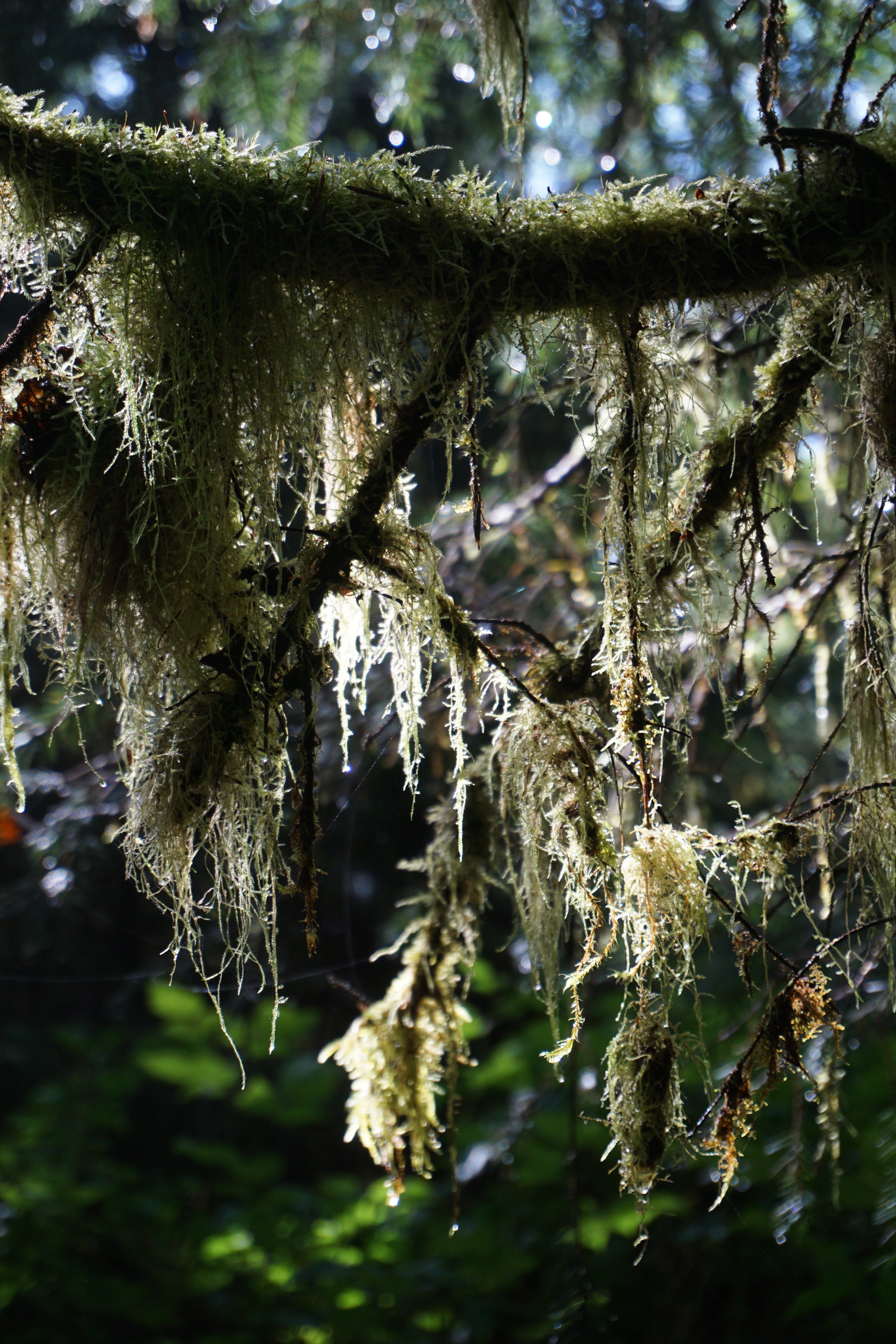 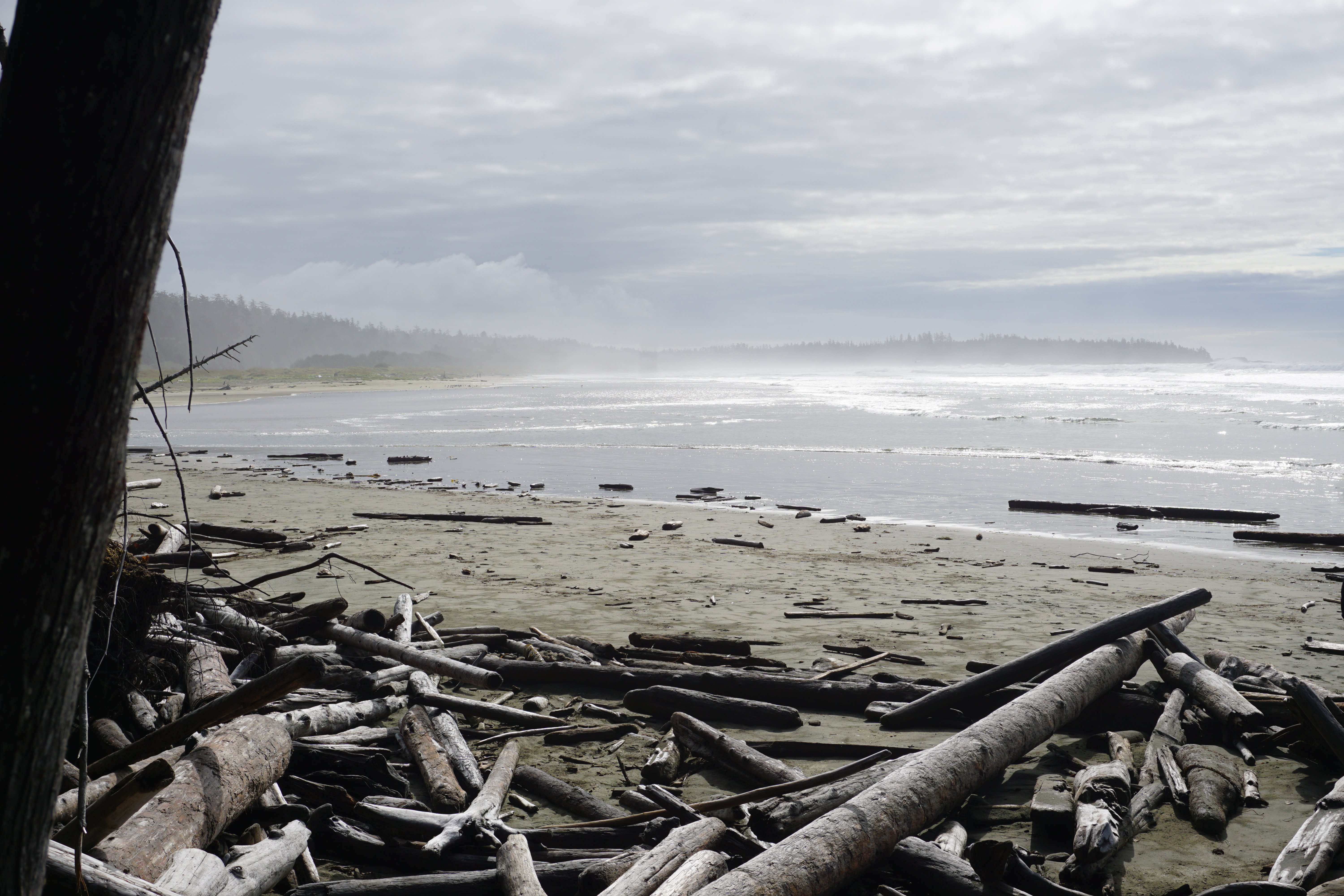 I wanted to see the spot where we had to swim across a channel to get back to the trail when we had been out two years ago.  As we got closer, I thought I had seen a small dog but with people and piles of driftwood, I wasn’t sure where it was or if it was on leash.  Well I found out soon enough when a little Yorkie-looking thing came bolting out from under wood and literally attacked my dogs.  I watched with dismay as Piper’s back end gave out when this little thing pounced on her.  An older gentleman came up, scooped the dog, and walked away.  I didn’t pay much attention to him as I was more concerned with Piper as she had her one leg hitched right up.  You know there was a whole long string of curse words going through my mind as I walked her to the nearby ocean and stood with her where the water was just deep enough to come up past her hocks.

After a few minutes, she seemed to be more balanced and we slowly walked back to the trail.  I stopped at the tree line so Leo could get in one more roll and Piper could rest as the walk back to the lot was uphill.  We went so slow and maybe because of it I noticed a lot more around us, namely the slugs.  There were slugs everywhere and they were huge.  It got me wondering if they could be eaten since they are much larger than the slugs I have back home which would make gathering enough for a meal less labour-intensive.  It turns out you can but they have to be prepped properly.  Hmmmmm maybe another time.

As we were slowly making our way back to the car, the man with the Yorkie walked by after he picked the little beast up.  No apology was uttered; all he said was “I didn’t have the leash on because no one was there when we got there” and then he was gone.  Oh well then.  That explains everything.  Sorry for going to the beach.  My fault.  A short time later a younger woman walked up and apologized profusely, explaining that her dad didn’t have control of the dog.  All I said to her was that my dog was now lame.  She seemed at a loss for words, muttered another “sorry”, and left.

Now I realize that I may seem a bit hypocritical.  I admit that my dogs have been off-leash in places where the rules say they are supposed to be on leash.  Having said that, if there is the chance that we could meet people, dogs, or wildlife, my dogs stay on leash.  Being country dogs, they spend a lot of time running around through forests and fields so I have a pretty good idea of how they are going to behave in all kinds of situations and when in doubt, they stay leashed.  Fortunately in this case, there were no punctures and Piper soon balanced out.

Needing to eat away the stress, we went to Wildside Grill in Tofino.  When I parked the car, Jack and Piper noticed a dog in the parking lot and oh my goodness the noise they made.  Never have I heard so much whining and barking.  When they finally calmed down, I brought them out of the car to order some lunch, namely salmon tacos.  The order came with three tacos loaded with fried salmon and pico de gallo.  It was a delicious lunch and the dogs had a few little bites of salmon.

We drove back through the park, stopping to walk on Long Beach.  While the water wasn’t rough, there were some decent-sized waves.  Piper went right to the ocean, pulling her brothers deeper into the water.  I really do think that she is trying to body surf but the water was a bit much for Leo and Jack who both wanted right out and I ended up being pulled in two directions as Piper tried to go farther in and Jack and Leo were trying to pull me out.  Leo dropped for a roll as soon as he was back in dry sand.  After a quick stop at the visitor centre to purchase a few little souvenirs, we were back on the road.  We were just in time too because the rain started to fall again. 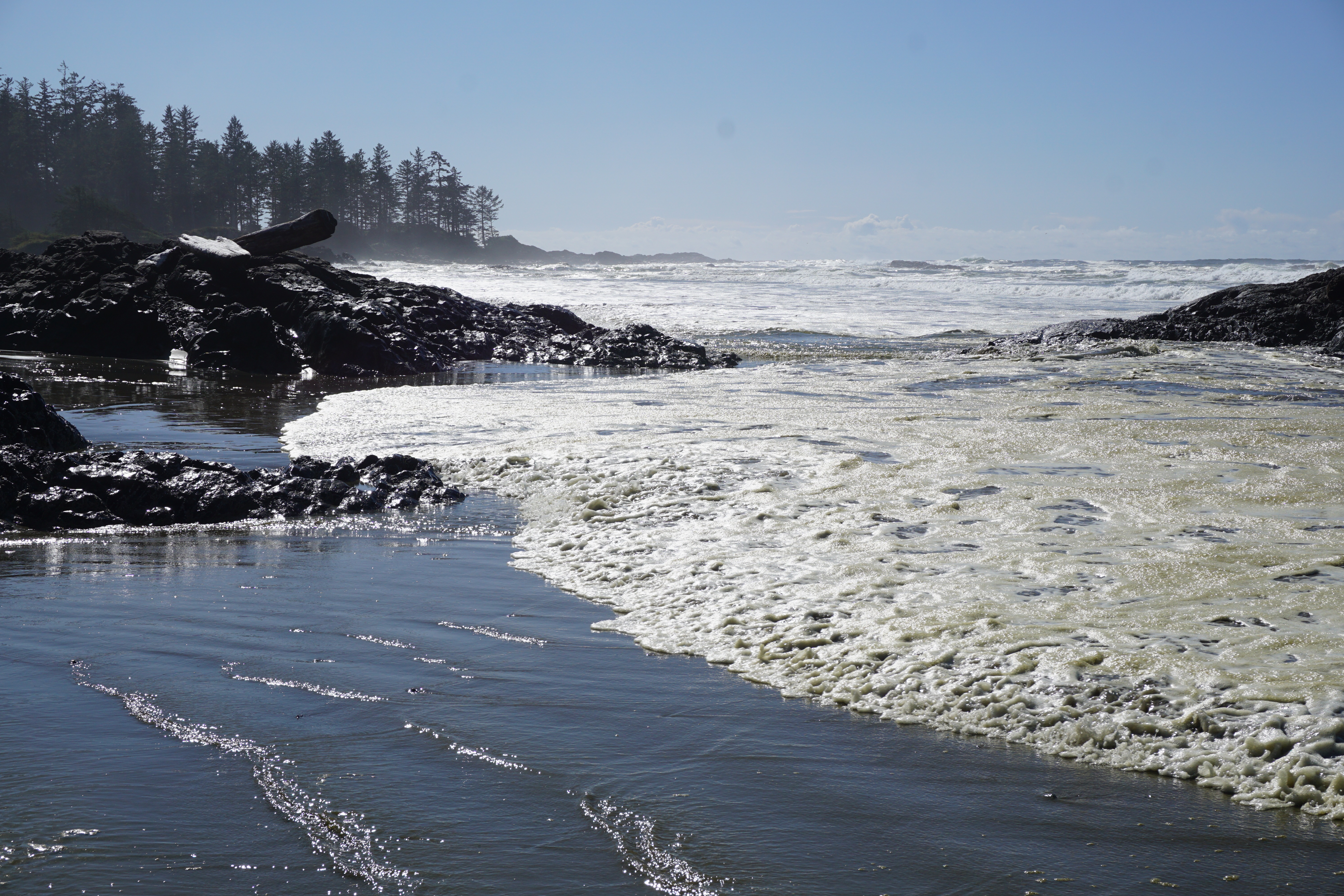 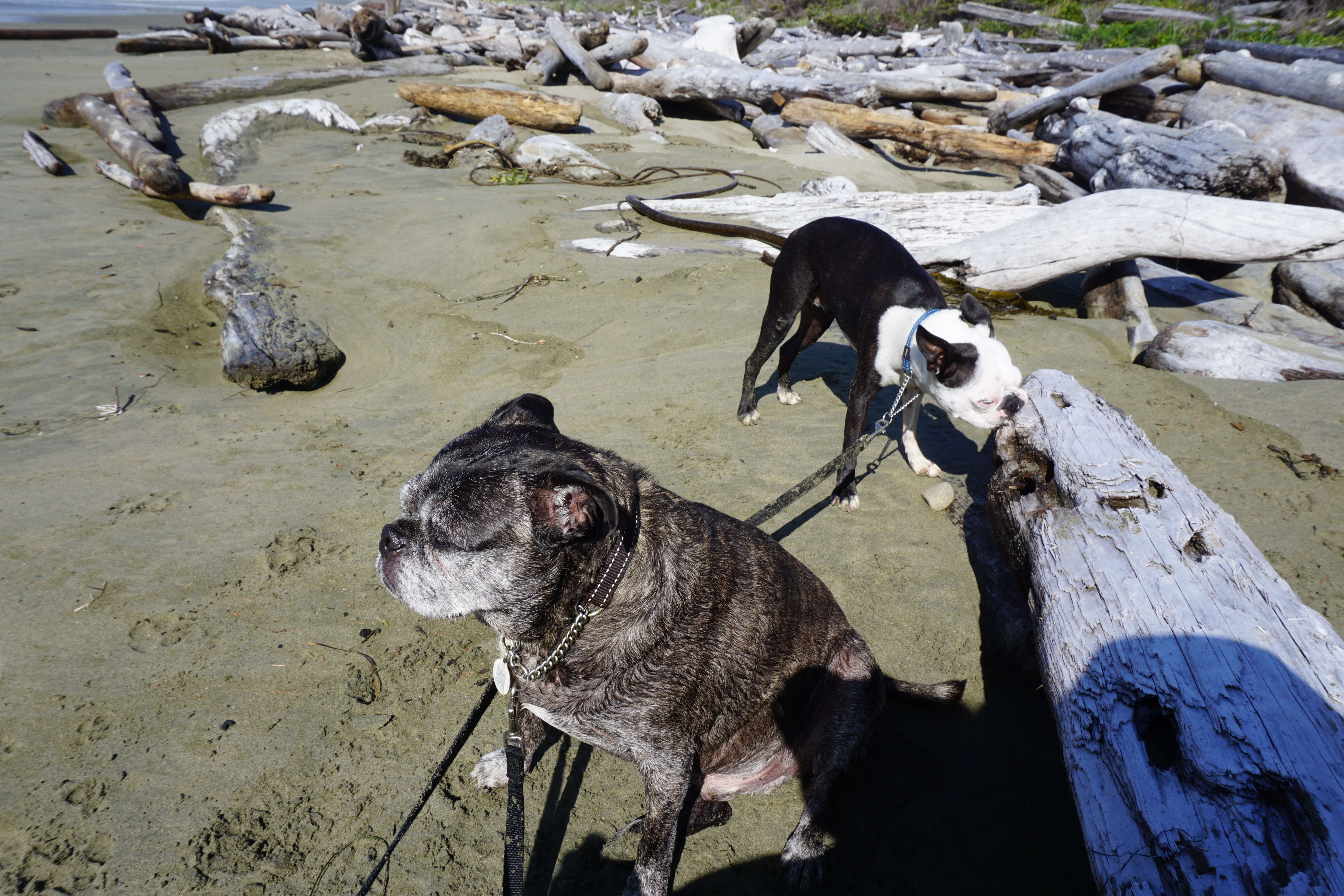 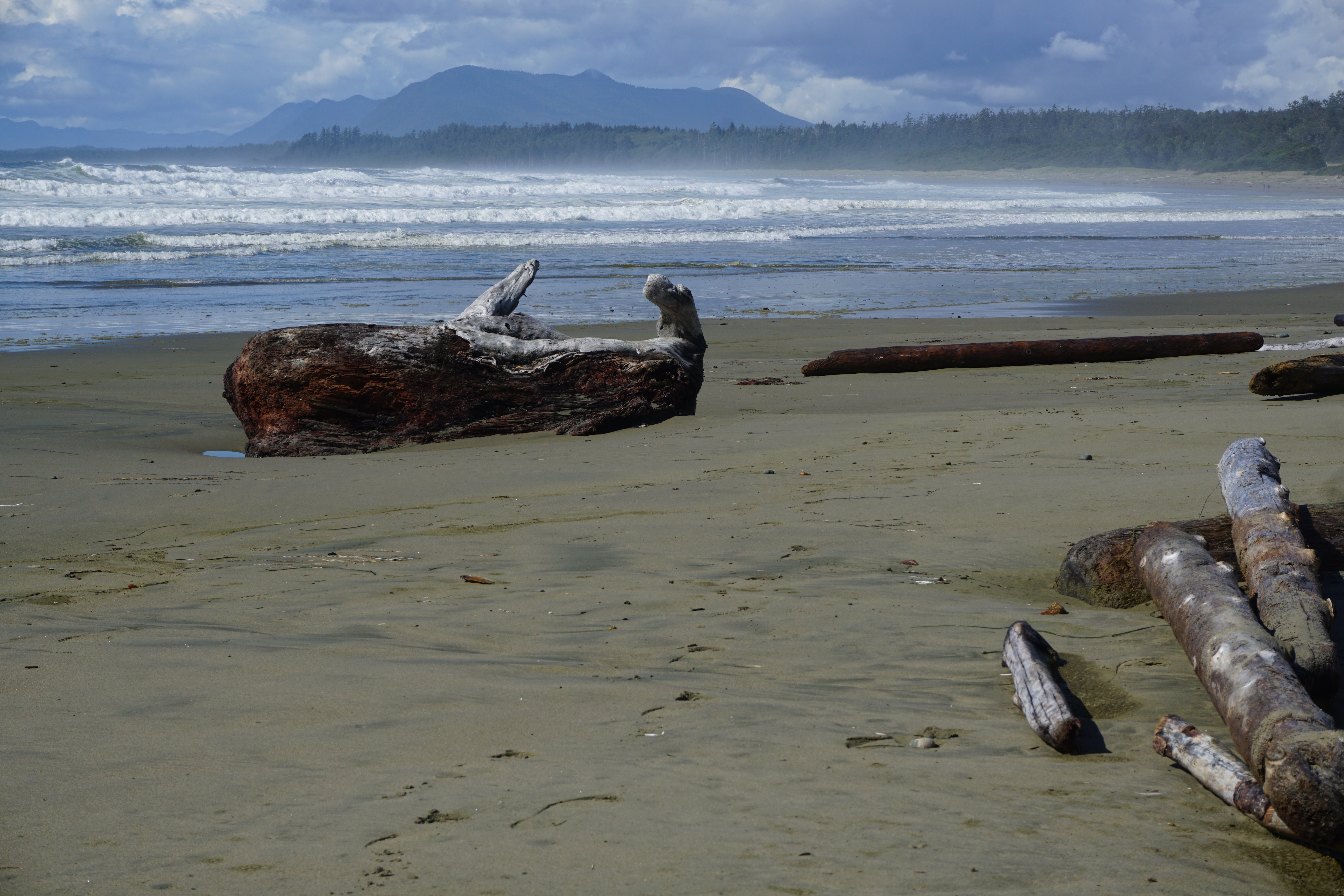 After a brief stop at Della’s Cafe for a coffee, we went to the ferry in Nanaimo and happily we drove straight on.  I had hoped to try and find the best Nanaimo bars but getting to the mainland was a bit more of a priority than finding yet another way to shove sugar down my throat.  I again stayed in the car with the dogs and found our next place to sleep: the Knights Inn in Merritt, British Columbia.  It would be a late night but with a warm bed, it would be a good sleep. 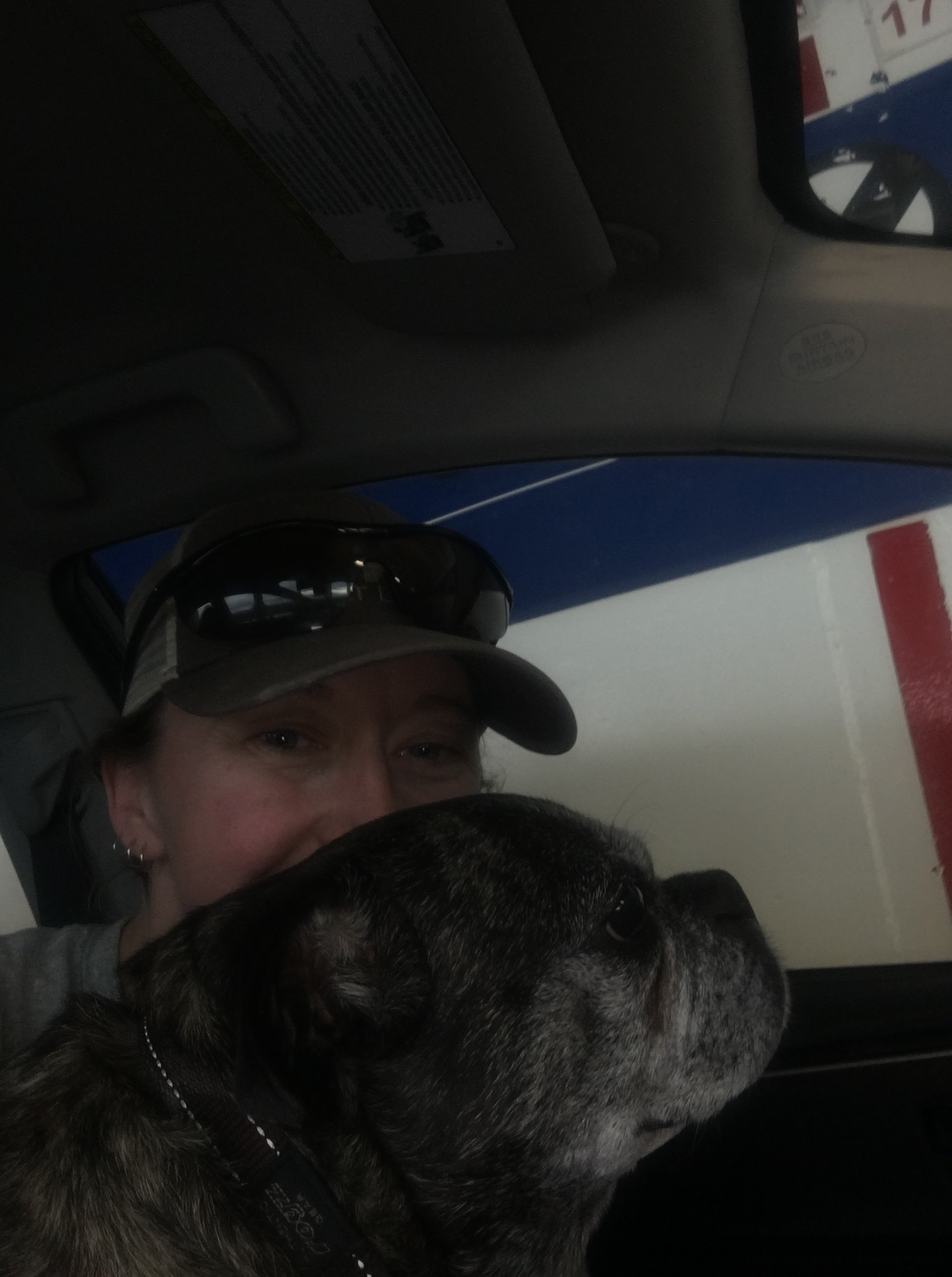 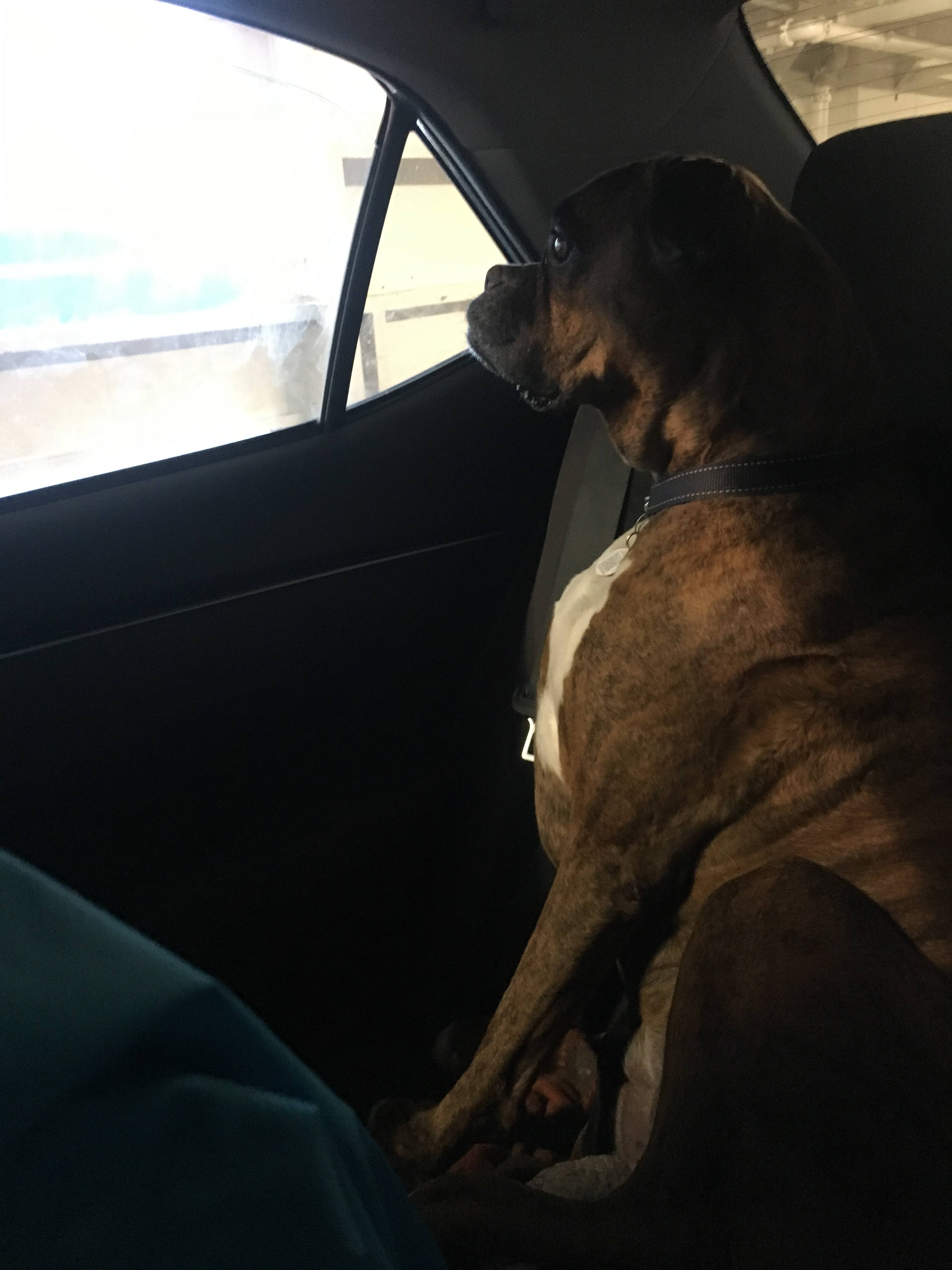 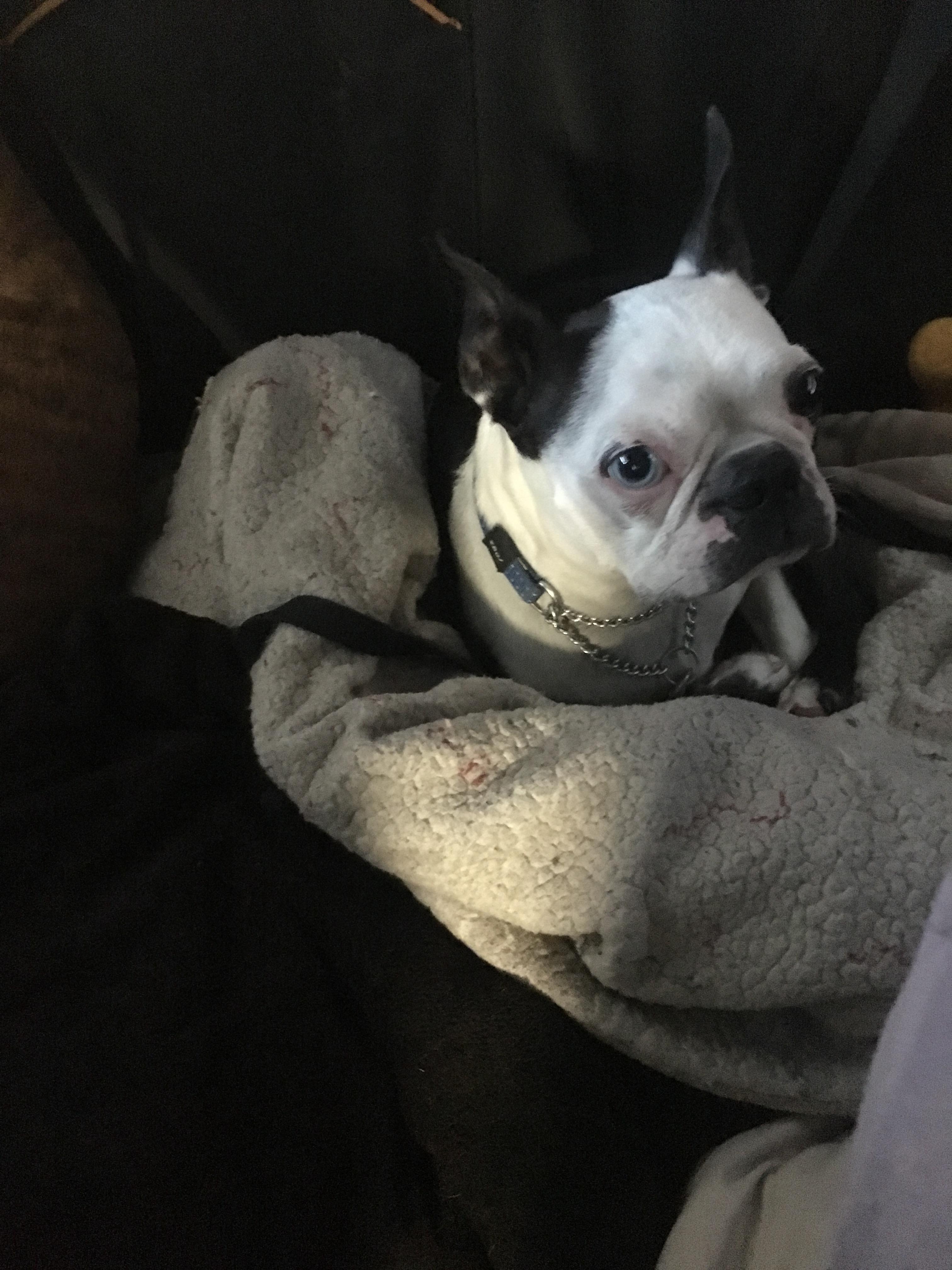 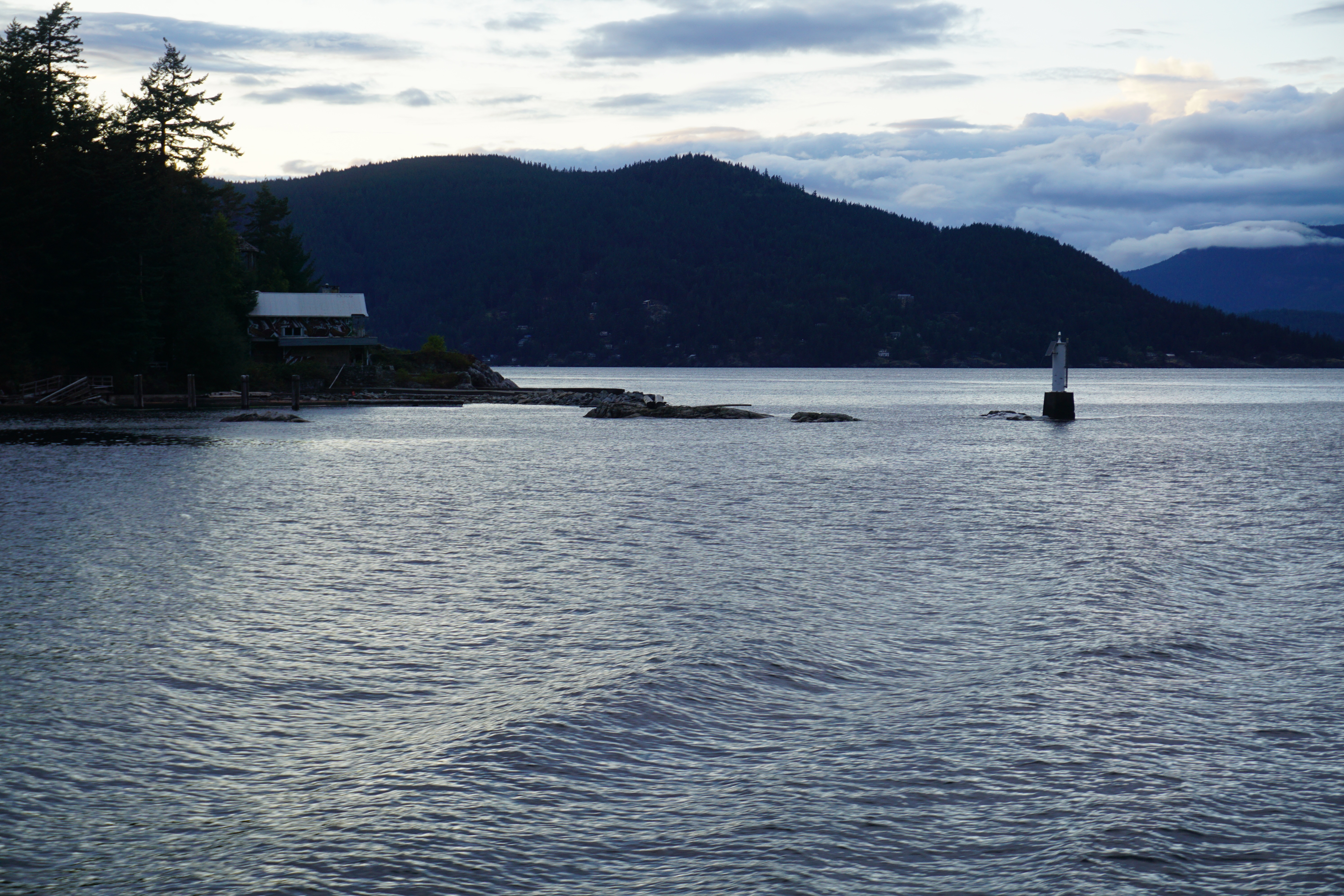 Sure enough, it was late when we got in to Merritt and when I checked in, I could barely keep my eyes open.  Fortunately the gentleman at the desk had everything ready and I almost spent more time walking to and from the car than checking in.  Then I walked into my room and even my sleep-deprived brain recognized a good room when I saw it.  We practically had a suite complete with a kitchenette and it had obviously been renovated recently.  It was one of the nicest motel rooms I have ever stayed in.  I practically fell into bed and passed out.

Tofino is a surfing hotspot and we saw plenty of surfboards along Long Beach.  Other than the challenging West Coast Trail, the trails are all pretty easy and there are some boardwalks, making it suitable for many ability levels.  Whale watching tours operate out of Tofino and there are plenty of places to go birding and fishing.

There are serviced, unserviced, and backcountry campsites in the park.

Tofino at the north end of the park and Ucluelet at the south end have plenty of food options.