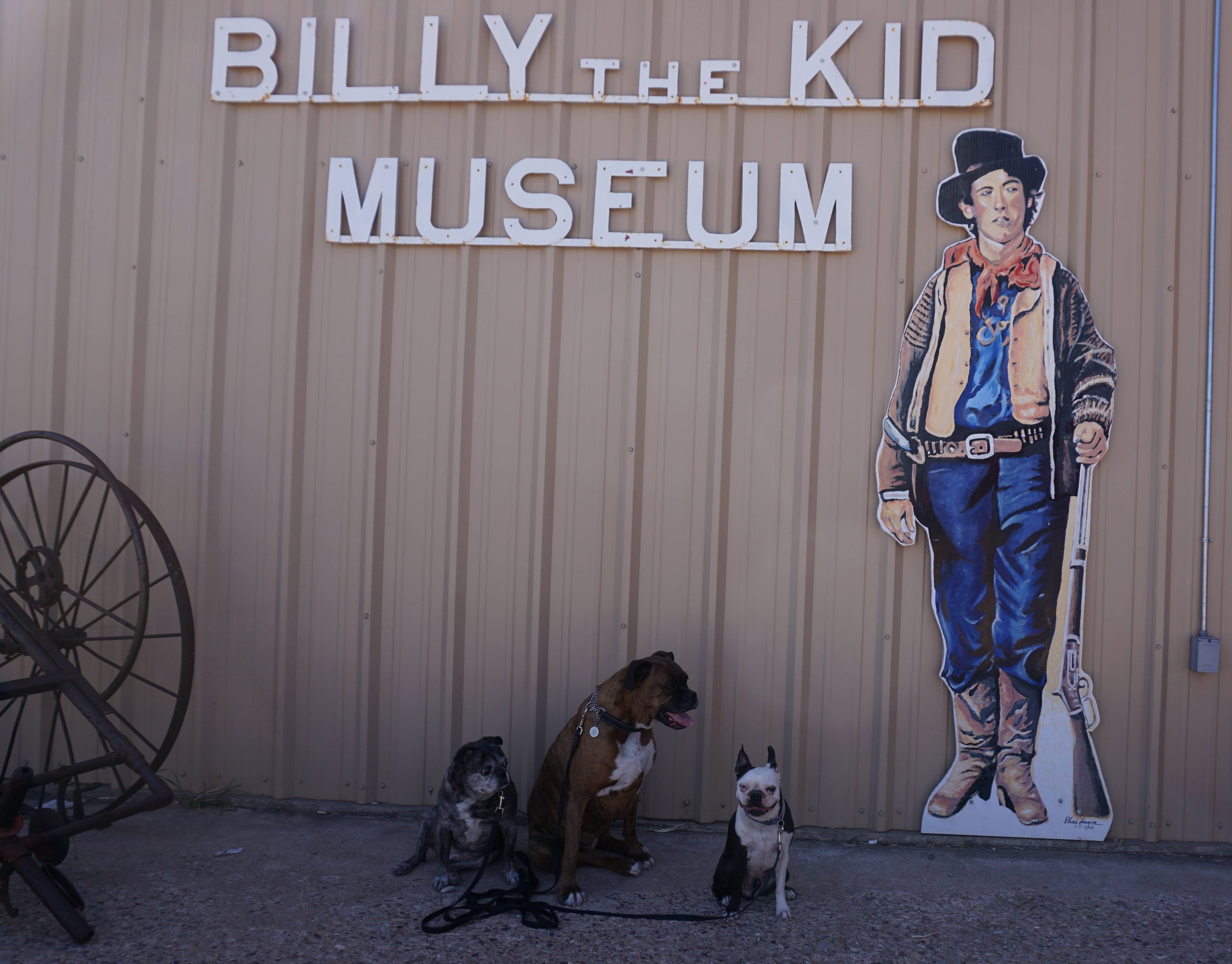 The alarm went off way too early, a sentiment echoed by the dogs as they moaned and groaned their way out of bed.  It wasn’t as cold as it had been the day before so I let Leo run naked as we set out for a morning stroll. I had planned to take them for a short walk after all the hiking the day before but Jack kept running ahead.  I guess desert life suits him.  Our lab friend from the day before joined us again.  She still kept her distance but Leo was able to get a bit closer to her before she bolted away from him.  She didn’t appear to be fearful, she just didn’t want to be too close.  Fair enough.

The dogs jumped right back on the bed as I packed up our gear and we headed into Roswell for breakfast.  I was tempted to go back to Stellar Coffee Co. but we went to The Cowboy Cafe instead.   When I asked the woman at the counter for a recommendation, I was told that the chicken biscuit and taters was her favourite.  I will have one of those and a coffee please.  The coffee was typical diner fare and I loaded it up with sugar and cream.  I sat outside with the dogs until my food was ready and then took my meal to a picnic table out back. Oh what a sight for my eyes when I opened the container: fried chicken on a biscuit topped with cheese, gravy, and a fried egg with potatoes.  I felt like I needed a nap after breakfast.  No sleep!  We drive. 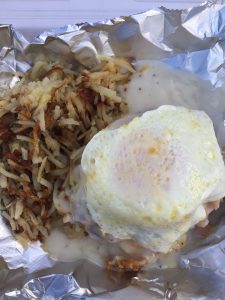 On the way out of town, I was sidelined by a sign for the “Best donuts in the Universe” at Eli’s Bistro & Bakery.  The building looks kind of dumpy on the outside but the cakes inside were so stunning I could not stop commenting on how pretty they were.  I left with a cherry fritter and a plain donut.  I know that’s not many but the fritter was the size of my head.  They may not be the best donuts in the world but they were pretty good and some of the best that I had consumed in some time.

We drove north along Highway 60 until we arrived in Fort Sumner.  The town is barely a town and I’m sure there would be no traffic if it weren’t for one man: Billy the Kid.  This was where he was killed and was subsequently buried.  We stopped at the Billy the Kid Museum which unfortunately was not dog-friendly but did give us a cute photo op.  While there, we met a woman from Aurora.  Aurora, Ontario.  As in less than an hour from where we live.  Talk about a small world.  She and her husband, who was in the museum, live in Lafayette, Louisiana but were born in Canada.  You never know who you’ll meet on the road. 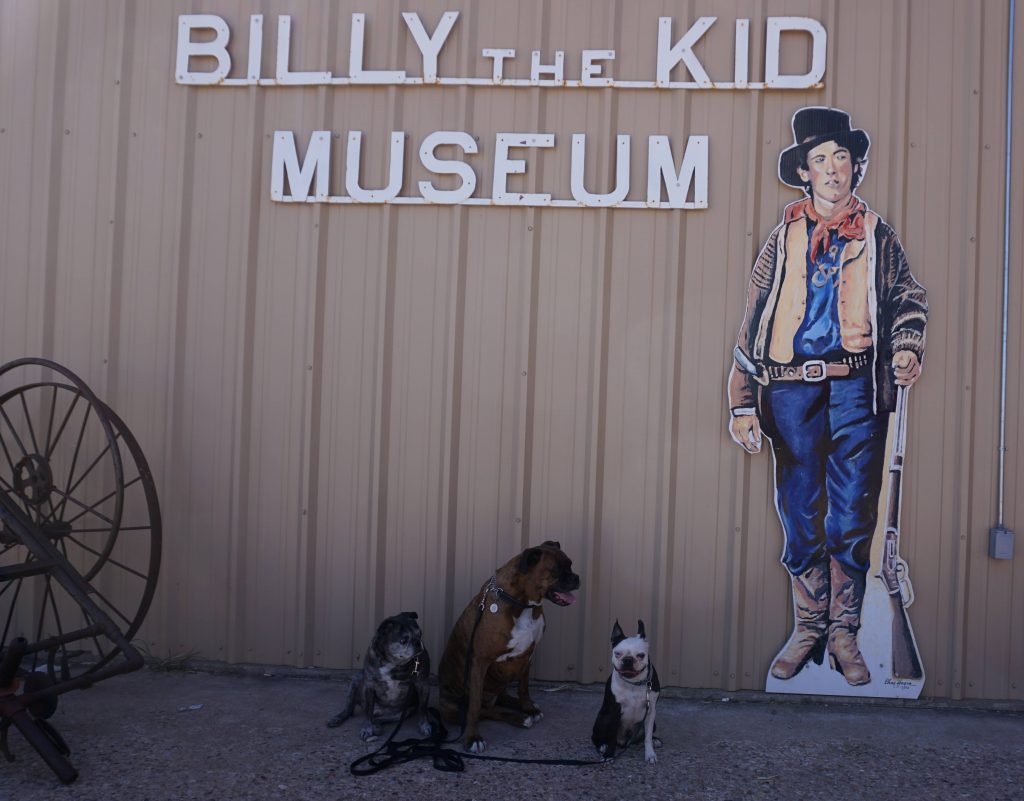 Once we left the museum, we drove to the gravesite of Billy the Kid.  While I was tempted to get photos of the dogs next to his tombstone it just seemed so ghoulish and disrespectful.  The grave is surrounded by a cage as the tombstone belonging to Billy the Kid has been stolen twice before.  There are actually two tombstones in the cage: one for the Kid and the other, with the heading “Pals” has Billy and his gang mates, Tom O’Folliard and Charlie Bowdre, listed.  As if a stolen tombstone wasn’t juicy enough, the graveyard was washed out and the grave stones replaced in approximately the same place.  So the marked gravesite may not be the real gravesite.  After leaving a tribute of some coins and looking at the sparsely marked graveyard, we left to continue north.

One of the places that the woman at Evocation Coffee in Amarillo had suggested we visit was Palo Duro Canyon State Park.  She had spoken so highly of it that we just had to go.  I was driving happily along, fields on either side, and then all of a sudden there’s a canyon beside me.  Where did that canyon come from?  When I stopped at the entrance booth, I asked about camping and the temperatures for the night.  When I heard that it was going to drop into the 20’s, well that dashed any hopes for camping the night.  At least it was still warm enough to get some hiking in before dark.  With the steep canyon walls and my two senior citizens, I wanted to keep the hikes short and sweet and everybody on leash since it was warm enough that snakes were a very real possibility. 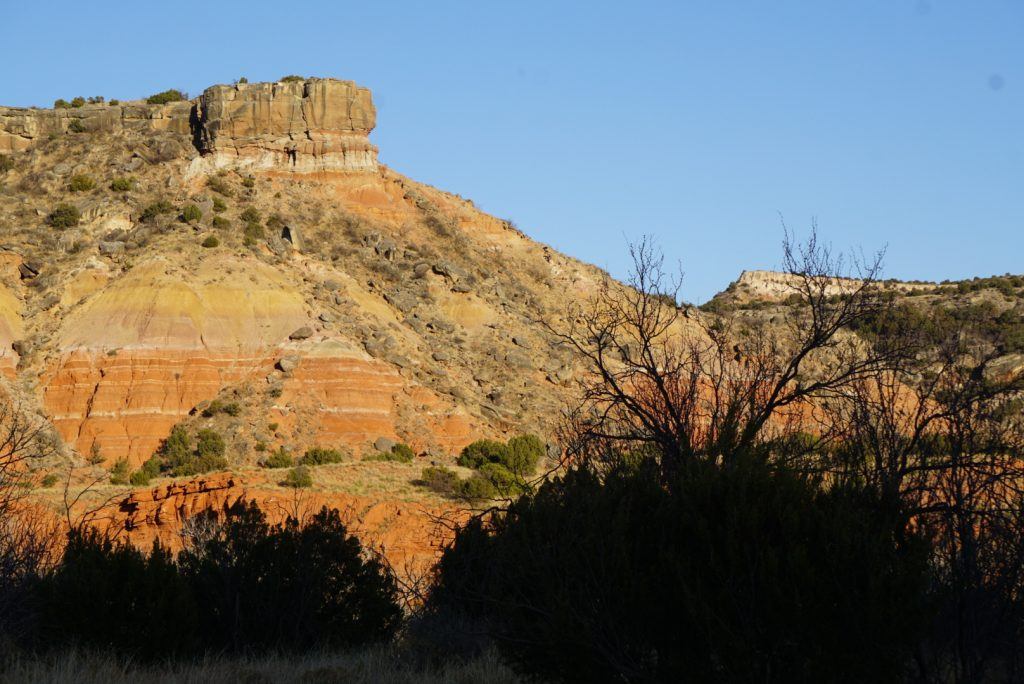 There are so many places to stop, that it is easy to pop into a nearby lot, hop out and hike.  We were meandering along one little stream trying to find a place where the dogs could get down the steep bank for a drink when I saw a woman on the opposite bank taking a photo of a porcupine in a tree.  Finally the dogs were able to get to, and in, the water, and we strolled bank to where the woman had been.  As we got into sight, I noticed that she was staring at me with what seemed like open hostility.  Here’s how the conversation went:

Her:  “Well I’m going to ask you to turn right around and leave because we have an endangered animal here and it doesn’t need to be scared by your dog.”

Me:  <confused>  “Really?  Where?  And what is it?”  <thinking that if there’s something that I need to be aware of, I’d like to know so I can keep an eye open>

Her:  “I’m not going to tell you that.  Just that it is the enemy of dogs and you have to go.”

Her:  blink blink “I’m not going to tell you that.  But you have to leave.”

Me:  <do I argue with her and point out that she’s not wearing a ranger’s uniform or just go?  Texas has concealed carry and I doubt that she would pull out a gun but me getting angry would agitate the dogs and that would upset the porcupine that was safely up the tree since that’s where they go to get away from predators and it is well over my head>   “Oh.  Really.  I see.”  <hoping she can see the you-have-to-be-kidding-me smirk as I think about the fact that I have grown up around porcupines in rural Ontario>

So we took our sweet time moseying back the way we came.  Now I have never heard of endangered porcupines but maybe they do exist.  More importantly, why do you always think of the really witty things to say after you need them?  Like “I guess Canadian porcupines are tougher” or “I see not everything is bigger in Texas” or the always popular “You’re not the boss of me!”

We had climbed up a little hill and as we were walking back down, I saw the woman walk by on the trail below us.  Ha this was our chance.  So did I stand directly under the porcupine?  Of course not.  That’s what a zoom lens is for.  Did that porcupine even move?  Nope.  Did the dogs know there was anything in a tree?  They didn’t even try to pee on the tree.

We walked back to the car and drove to the end of the road then turned back.  I made one last stop for a walk at Lighthouse Trail and when I opened the door for the dogs, both Jack and Piper just sat there.  Ok pups, I get the hint.  I left them in the car with the windows rolled down far enough that someone could have easily crawled in as Leo and I took a quick walk down the trail before we turned back to the car. 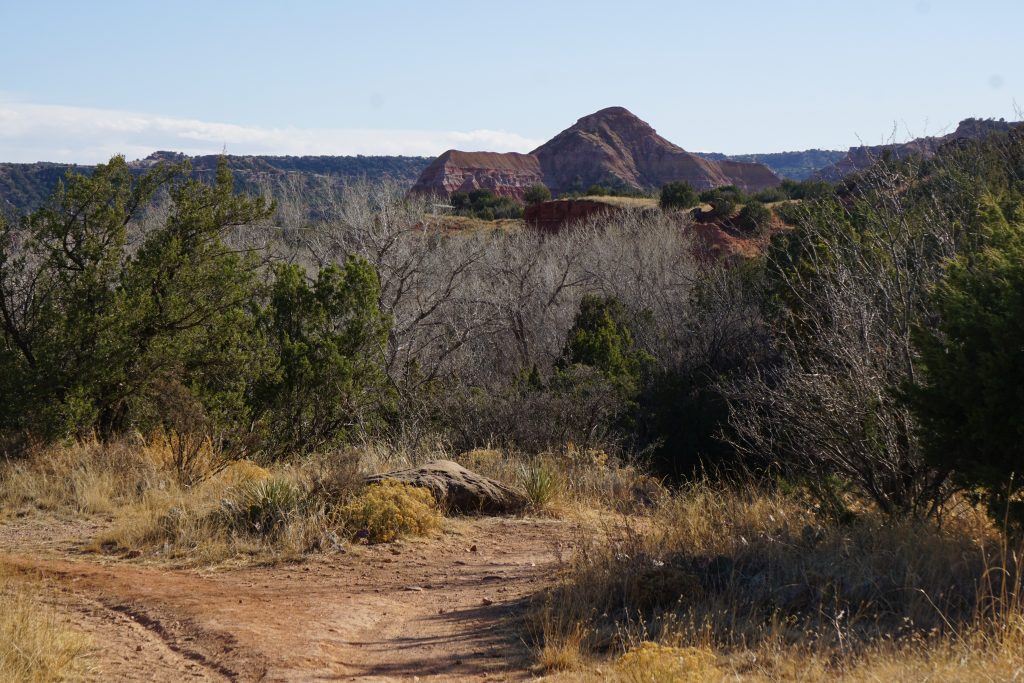 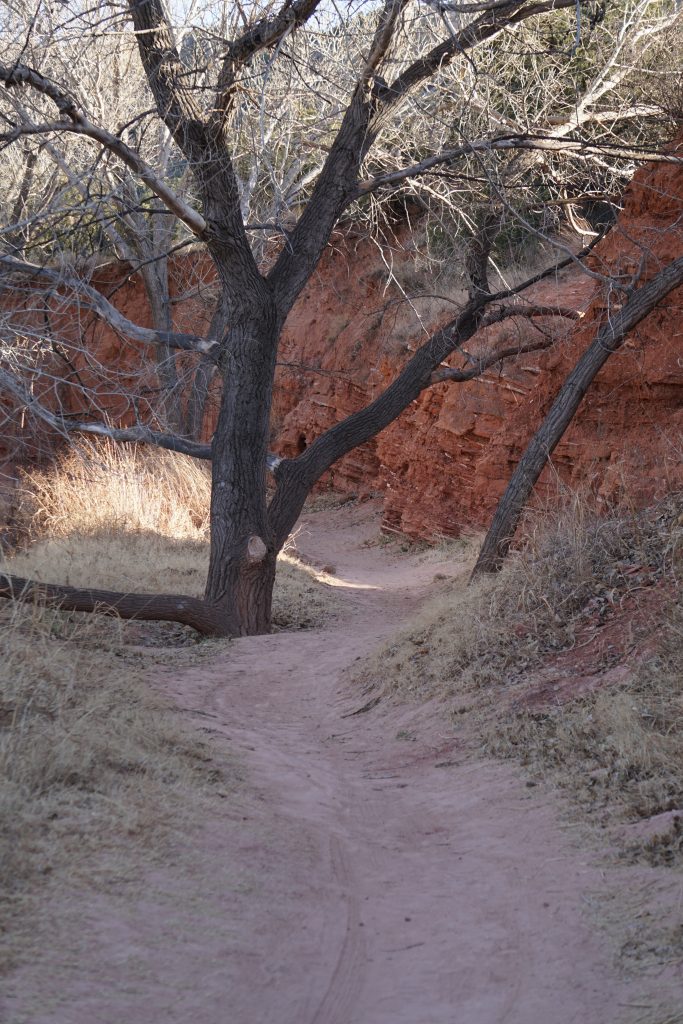 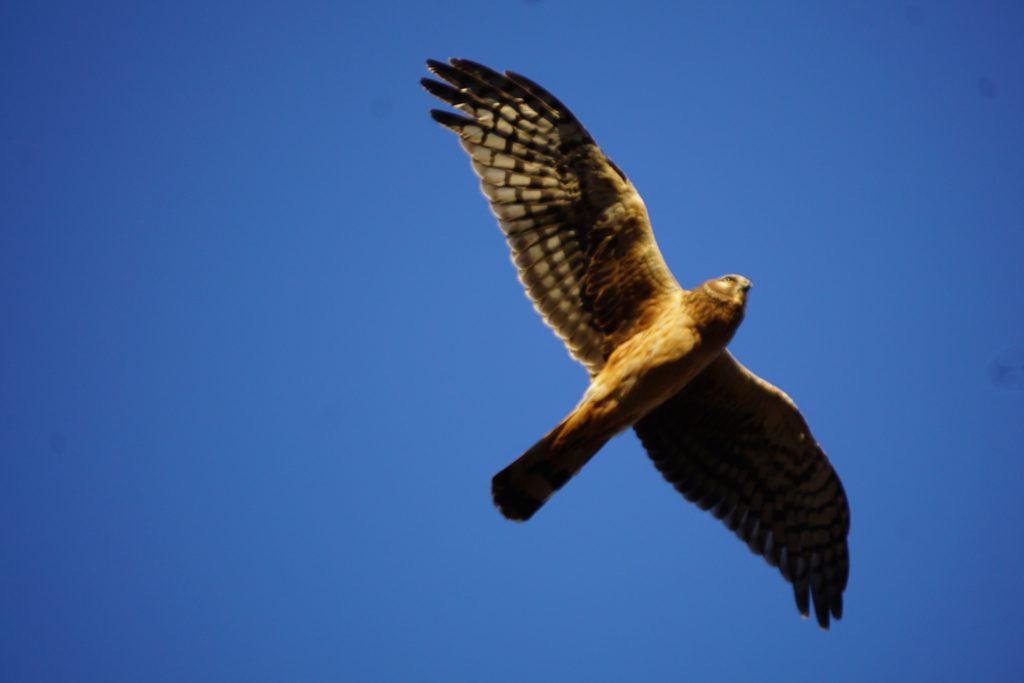 I’ll confess that I made one more stop to take photos of the moon rising.  Actually, as I was driving to find a place to safely stop, we passed a person on a bridge with a camera in their hand.  It wasn’t until after we passed that I realized it was the same woman!  Do I dare go back and say all the witty things I had thought of?  I had come up with an entire conversation in my head that I had thought to unleash upon her if I ever saw her again.  No I decided to take the high road and go take my photos of the moon.  Although it had gotten quite warm during the day, it was getting noticeably cooler. 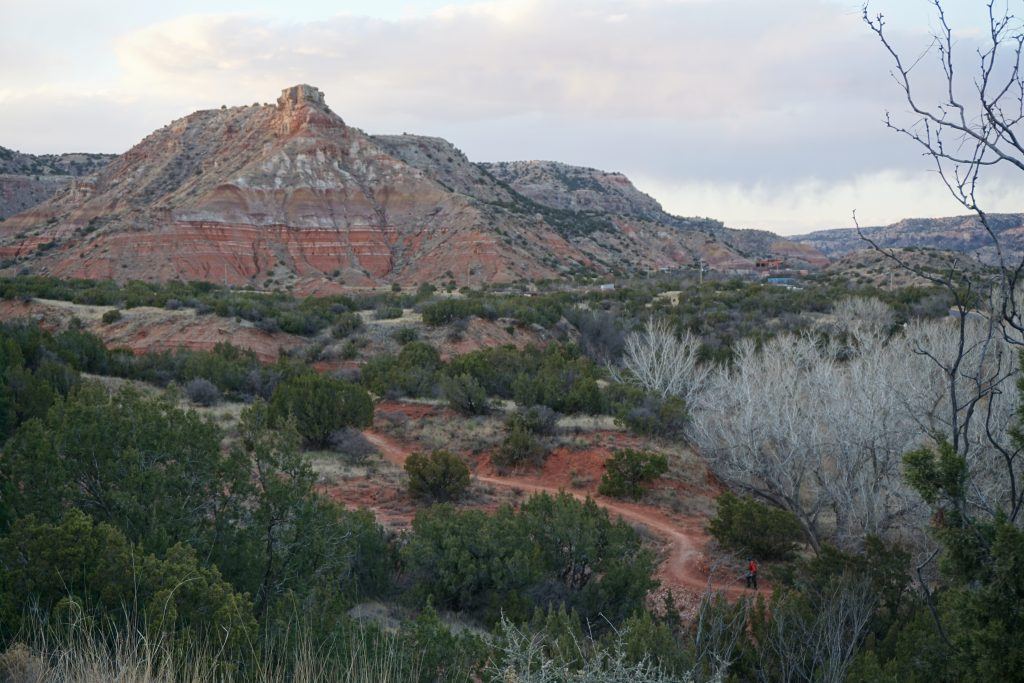 As we left the park, we passed by some of the Texas long-horns that live in a paddock at the front gate and some deer that came to share their food before we continued to Amarillo, nibbling on the last of the cherry fritter as I drove. 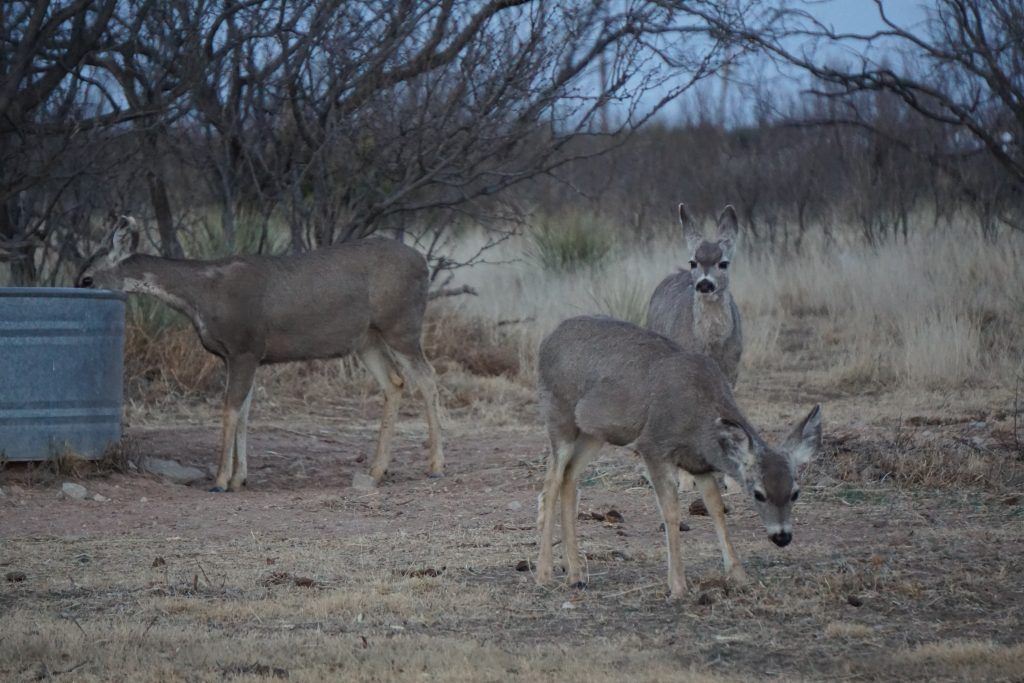 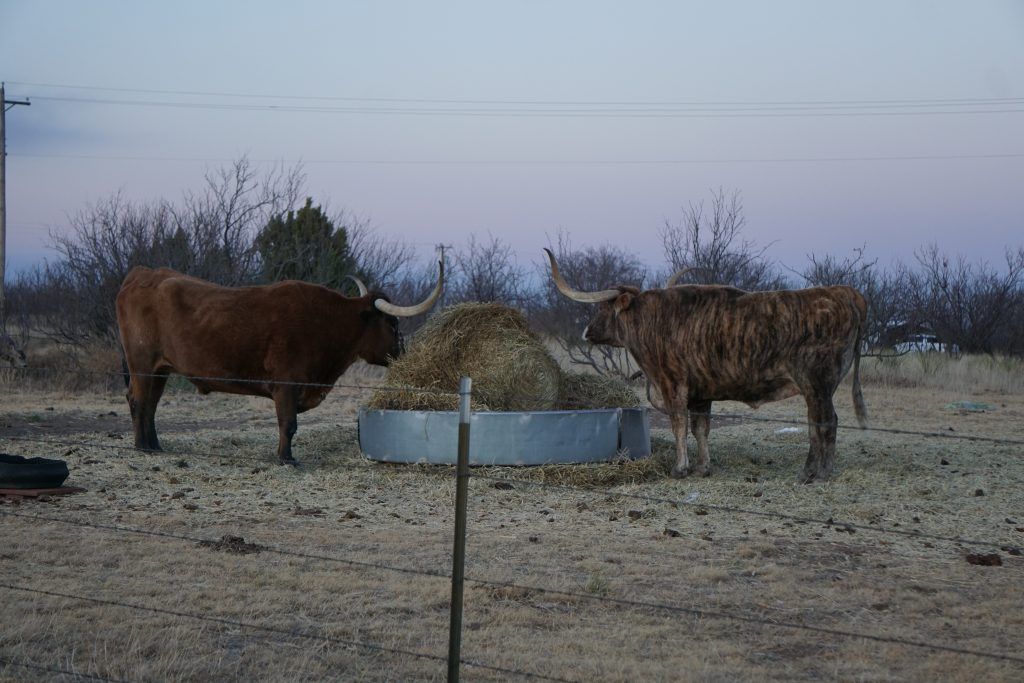 If you go to Pal Duro Canyon, make sure you take LOTS of water, sunblock, and appropriate clothing.  There are warning signs at a lot of the trailheads about not going out when it’s hot and I even saw some thermometers erected.  I could see getting into trouble very easily since the canyon rock absorbs so much heat and you basically bake.

I decided to stay at a different hotel and we went to the Red Roof Inn for the night.  I was so tired that I was practically sleeping standing up and it was one of the few times that I fell asleep as soon as my head hit the pillow.

To read about our trip from the beginning, click here.

Or read here for the next day.