I’m not sure why I was awake before the alarm.  I can’t say it was before the sun came up because the rain was still falling steadily outside the Town and Country Motel in Clinton Illinois.  The dogs seemed less than impressed with the early hour and they were all quite content to stay in bed.  They even turned their noses up at the bowls of food that I placed in front of them; apparently breakfast in bed holds no appeal for them.  It had been a long day for them the day before.  After all, it had been a long drive from Ontario and it’s hard work sleeping for that long.  So while they stayed snuggled in bed, I packed up the car.  Once I got my divas loaded up, we drove to the nearby Coffee Corner for breakfast.

We were a little early so we took the opportunity to go for a short walk on a nearby patch of grass.  The rain had tapered to a light drizzle at this point and the dogs set about claiming every inch of Illinois for their own.  By the time we finished our loop of the grass, they were pulling me back to the car to get out of the rain.  By this time, the “Open” sign in the Coffee Corner had turned on and I strolled in, eager for some caffeine and my own breakfast.  It is such a cozy and homey little spot, like a breakfast nook in a house except this nook had a blackboard that stretched from floor to ceiling with the menu.  I stood like a deer in the headlights, overwhelmed by options until I settled on the redeye and a breakfast bagel.

It was obvious that this was a community place as the few people that came in all knew each other by name and the staff knew what the “usual” orders were.  Even the parents of one of the young women working there came in for their morning coffee.  Love it.

I took my order back to the car and had a long pull at the redeye.  A redeye is a shot of espresso  topped off with brewed coffee.  Yes it’s coffee on top of coffee.  This one was quite good, lacking the bitterness that is some times overwhelming in these drinks.  The bagel had egg, cheese, bacon, and the whole sandwich had been toasted on a panini press.  Be still my heart (or is that the caffeine?).  Needles to say, the dogs perked up and they had little pieces of bacon to nibble on before we turned to continue south.  I was so taken by Coffee Corner that I did a little research: it was founded and is owned by two sisters after another coffee shop had to be shut down after a fire.  If that is not the definition of a small family-run business that serves the community, well then I don’t know what it.  This is EXACTLY the kind of place that I love to find.  If you’re anywhere near Clinton, it’s worth a stop.

We had not gone far and were in the middle of nowhere when I looked to the side of the road and saw a small park appear beside us.  It actually wasn’t the park that initially caught my attention but the field next to it that was covered with geese.  Mt. Pulaski Township Park is basically a small pond with a strip of grass around it surrounded by farm fields.  Since no one else was around, I figured it would be a good place to let the dogs stretch their legs a bit.  I slowly eased the car past the geese, snapping furiously as we crept by then parked the car at the far side of the pond.  The dogs immediately set out to sniff everything and Jack even tried climbing down the bank to go for swim.  Fortunately the side of the pond was too steep for him and he eventually gave up.  I don’t mind a little bit of wet dog but Jack’s thick pug coat holds water like a sponge and I did not want to have that in the car all day long.  Once we were all good and wet from the still-falling drizzle, we climbed back in the car and drove on.  St. Louis Missouri was calling. 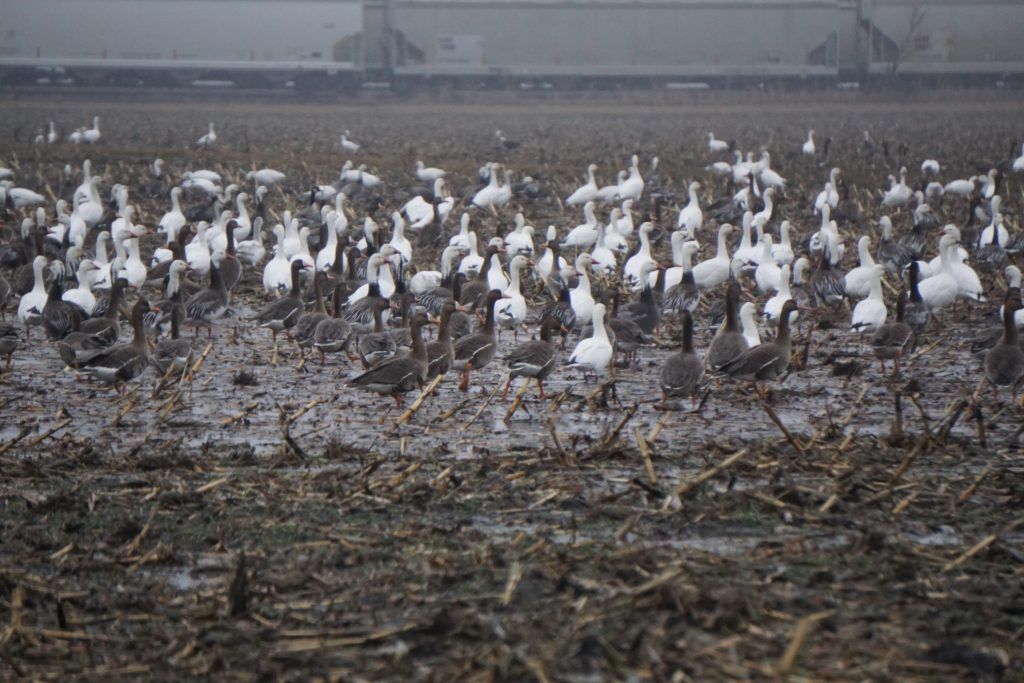 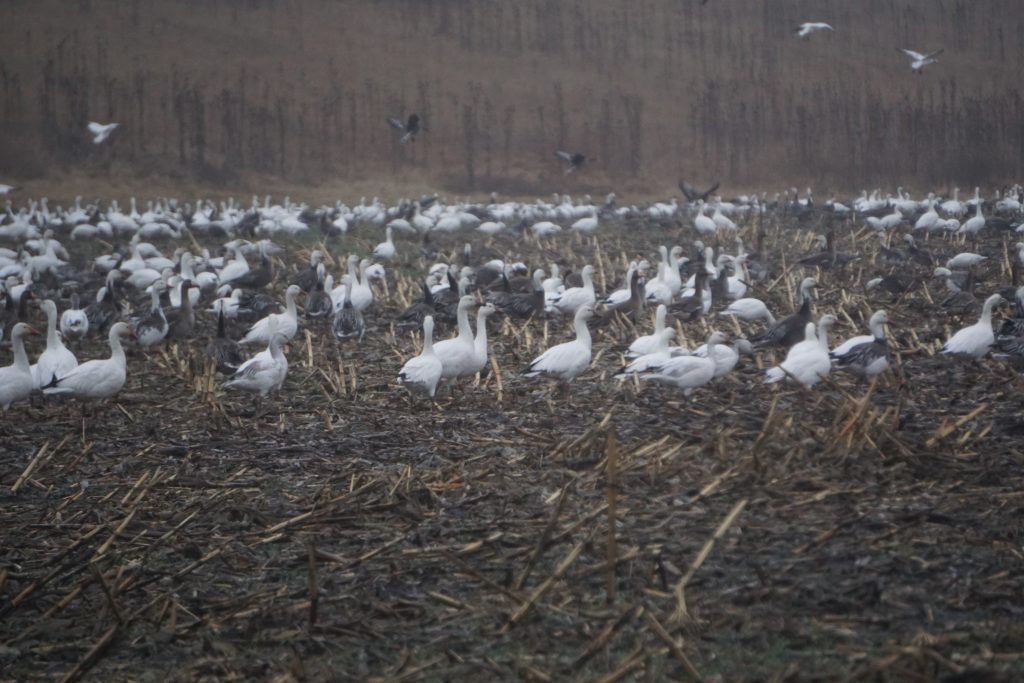 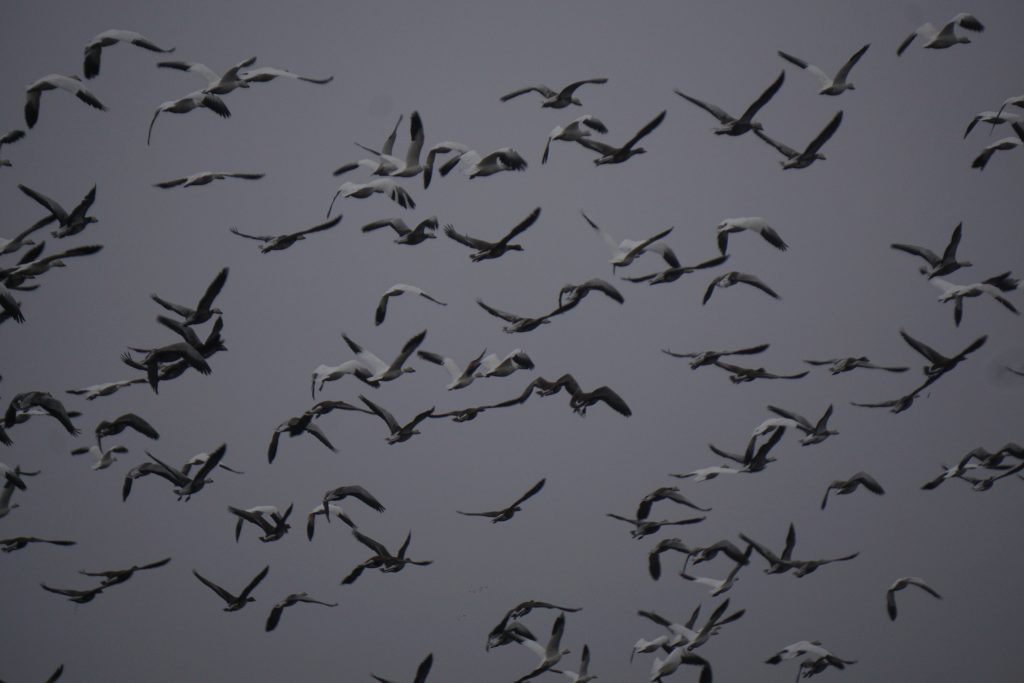 There were a bunch of places that I wanted to visit in St. Louis but I decided that I would stop at one that had eluded me on our last trip through.  I mean, how could I not want to stop for donuts at Ex Cop Donut Shop?  When I parked the car, I even saw a donut paddy wagon in the lot and everything (insert excited giggle here).  I will however admit that I was little disappointed with the decor inside.  I had expected that they would totally play up the cop/donut theme but there was nothing on display except for a little model police car.  The donuts more than made up for it.  I asked the woman to pick out a half dozen and her selection was outstanding.  I’m not going to lie: two of the donuts did not make it out of the parking lot and another two didn’t cross the state line.  I have a friend who is a police officer and he said he hasn’t eaten a donut since he got hired because he doesn’t want to be “that cop”.  I showed him theses pictures and all he did was shake his head at me. 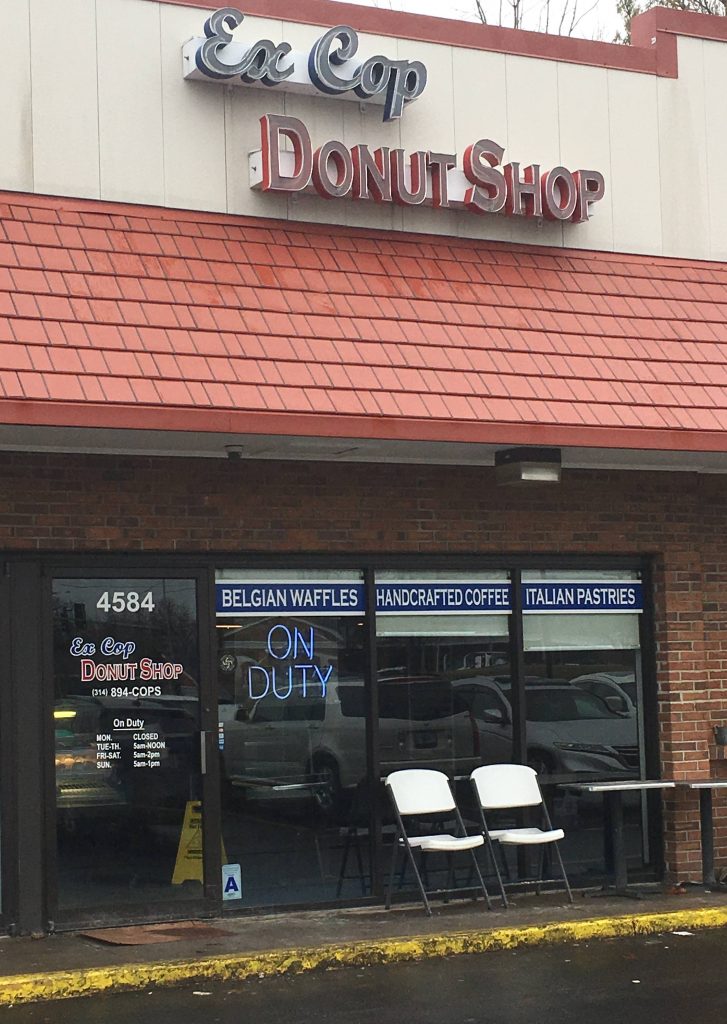 I knew that I had to break free from the donut’s siren song and get out of St. Louis as soon as I could or I’d fall down a rabbit hole of fried dough goodness.  I wanted to work off some of the sugar rush and St. Louis County West Tyson Park was just the place to do it.  Oh how I would have loved to wander this park.  The rain had stopped and it is just the kind of place that I could easily lose myself for hours.  There were several trails that lead off from the parking areas and there were a few covered picnic spots.  I knew that the dogs would happily go for as long as I wanted to hike the hilly trails but with Piper’s arthritis in her back legs the last thing I wanted to do is let her overexert herself, especially this early in the trip.  I decided that 20 minutes would be a good time to be out and we set off down the trail, pausing for a few quick photos.  Needless to say, when we were in between two hills and I decided to turn around rather that climb up a steep incline, Piper was not happy with me and both her and Leo kept trying to lead me farther up the trail.  I honestly considered going on, the familiar urge to see what’s around the next corner.  Sorry pups, back to the car we go.  At first Piper and Leo were dragging behind me and seemed to almost be pouting until we met a father and his daughter out on the trail who stopped to pet the dogs.  After that, they seemed to forgive me for ending their walk earlier than they wanted.

I had this wacky idea that Route 66 was a well-marked road that would lead through quiet parts of the countryside and my plan had been to drive it as much as possible.  It wasn’t.  There were parts that were so poorly marked that I had no idea where I was.  At other times, I would look beside me and see the interstate that perfectly paralleled the route.  There were even some parts where the interstate had replaced Route 66.

Somehow, towards the end of the day, I was on Route 66 and drove into Verdigris, Oklahoma.  Knowing that I would need to eat something other than the remaining donuts, and so I wouldn’t be able to say that I ate a half dozen donuts in one day, we stopped at Okie Annie’s.  I walked up to the counter, proclaimed that I was a traveller passing through, and asked what they recommended.  With no hesitation, the answer was the Okie Twister.  Done.  “Would I like onion rings with that?  They’re really good.”  Why yes.  Yes I would and some swee’tea please.  As I waited for my order, I asked if there were any places we needed to stop at or things we should see on our way through.  This seemed to require a lot more thought than the food recommendation and finally I got a shrug and was told “It’s just Oklahoma”.  Huh, not the answer I expected.  We discussed the difference in climate between Oklahoma and Ontario and I was shocked when they told me they get snow.  This was quite the revelation for me as I hadn’t thought that it would get cold enough for snow this far south.  By this time my food was ready and I took my heavy bag out to the car.  It was too chilly to sit outside (which was what started the talk about snow) so I parked the car in a quiet corner of the lot and tucked into my meal.  The Okie Twister is a bacon cheeseburger topped with an onion ring which seems to be a regional speciality.  It was soooooo good that I devoured it.  I was not as impressed with the onion rings; while they avoided the slimy worm that many affects most onion rings, the seasoned breading seemed to be very floury and not as crisp as I usually like them.

After I finished eating and decided to start breathing again, it was time to try and find a place to spend the night.  With the falling temperature, camping was not an option.  We were not far from Tulsa but when I started looking at the hotels available for the night, the pet fees quickly started adding up.  So I decided that we would call it a night early and head to the nearby Will Rogers Inn in Claremore.  No pet fees.  Score!

Once I got checked in, I took the dogs for a short walk around before bringing them inside.  In actuality, they decided they wanted a short walk since they pretty much just stood there and looked at me.  They all had a drink, a few bites of food, and then they climbed up on the bed and passed out.  I’m a little jealous of how quickly they fall asleep while I try and fold myself around them to sleep but eventually I joined them in Sleepsville.

Click here to read about the first day of our trip.

Or skip to our next day on the road.

2 response to "Hiking Off Donuts"