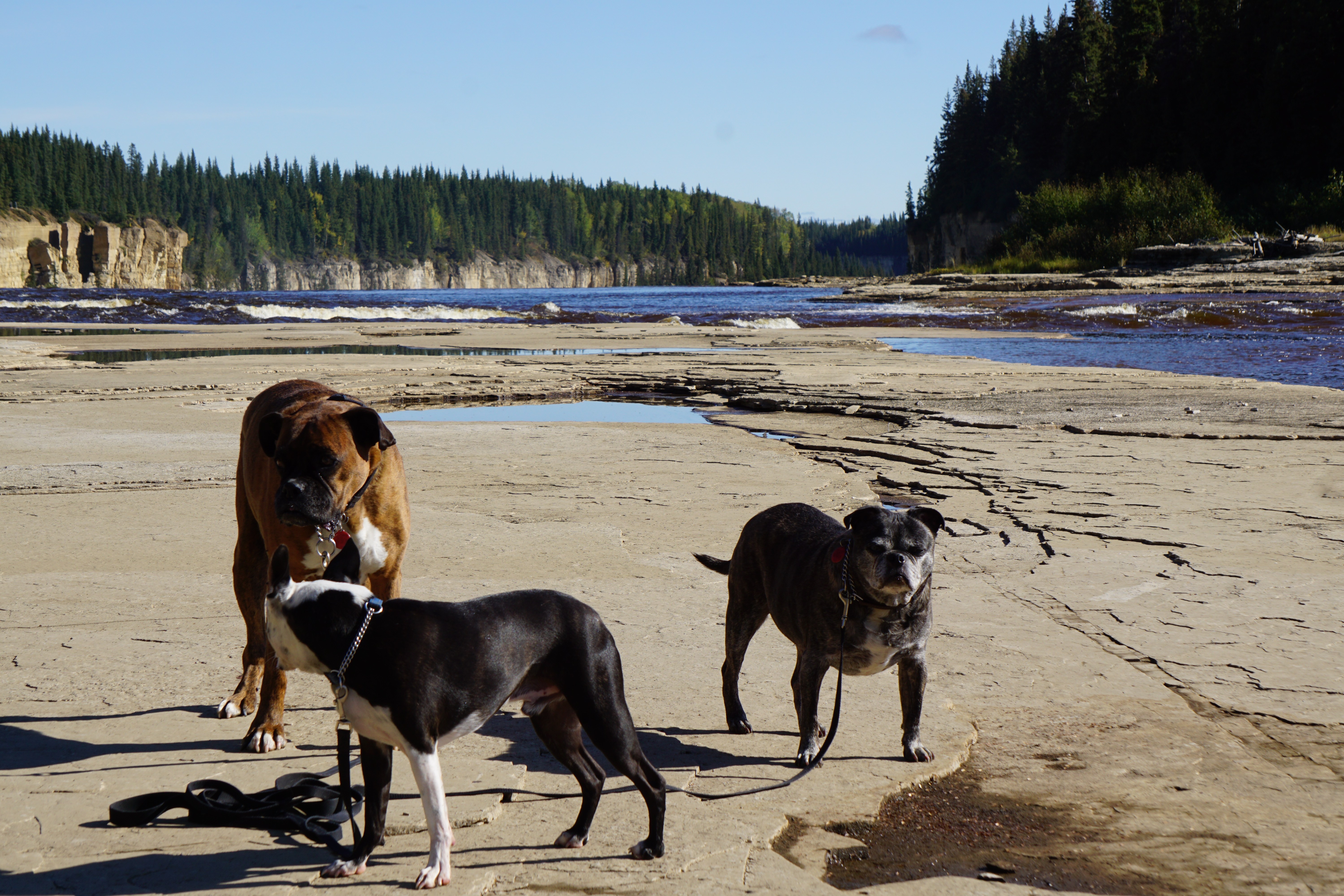 After sleeping in the car and in a tent for almost a week, I had forgotten how nice it was to sleep in a bed.  Talk about luxury!  Even though I was twisted into some weird shapes around Jack and Piper, I was out until the alarm went off.  Taking advantage of the kitchen, I made some coffee before packing up and putting the dogs in the car.  Then for some reason, I went straight to The Rusty Raven and got another cup of coffee.  I guess I went into autopilot on that one, even forgetting to make breakfast like I had planned.  Oh well.  My travel mug would keep me well-caffeinated during the day.  I wasn’t too hungry and wanted to get going so I decided to pass on Anna’s and get food farther down the road.

As we left Fort Smith, I stopped to get gas.  I pulled up to the pump and thought nothing of jumping out of the car and starting to fill the tank.  Until I sensed someone beside me.  It seems that full service gas stations are the norm and not the exception like they are down south.  Ummmmm awkward.  I feel dumb enough sitting in the car when someone is there, never mind already filling the tank and then having to get back into the car.  By the time I explained that I was not used to full serve and I’m from Ontario and I’m sorry I didn’t mean to steal your job *click* and I’m done.

I drove back along Highway 5 and was hoping to get a few short hikes in as we left the park.  Hmmm Salt Plains Lookout.  I thought about stopping there but the thought of the dogs running on a salt plain made me a bit nervous about their little feet, especially since the ground was still very damp.  So we continued east.

I noticed that there was much less wildlife on Highway 5 than there had been on Pine Lake Road.  It made sense considering the greater amount of traffic on Highway 5.  We did see a bull bison wallowing on one shoulder and I eagerly brought the car to a halt to get photos of the rolling bison…and he stopped.  Darn.  At least I have some great pictures of a mud-crusted bison. 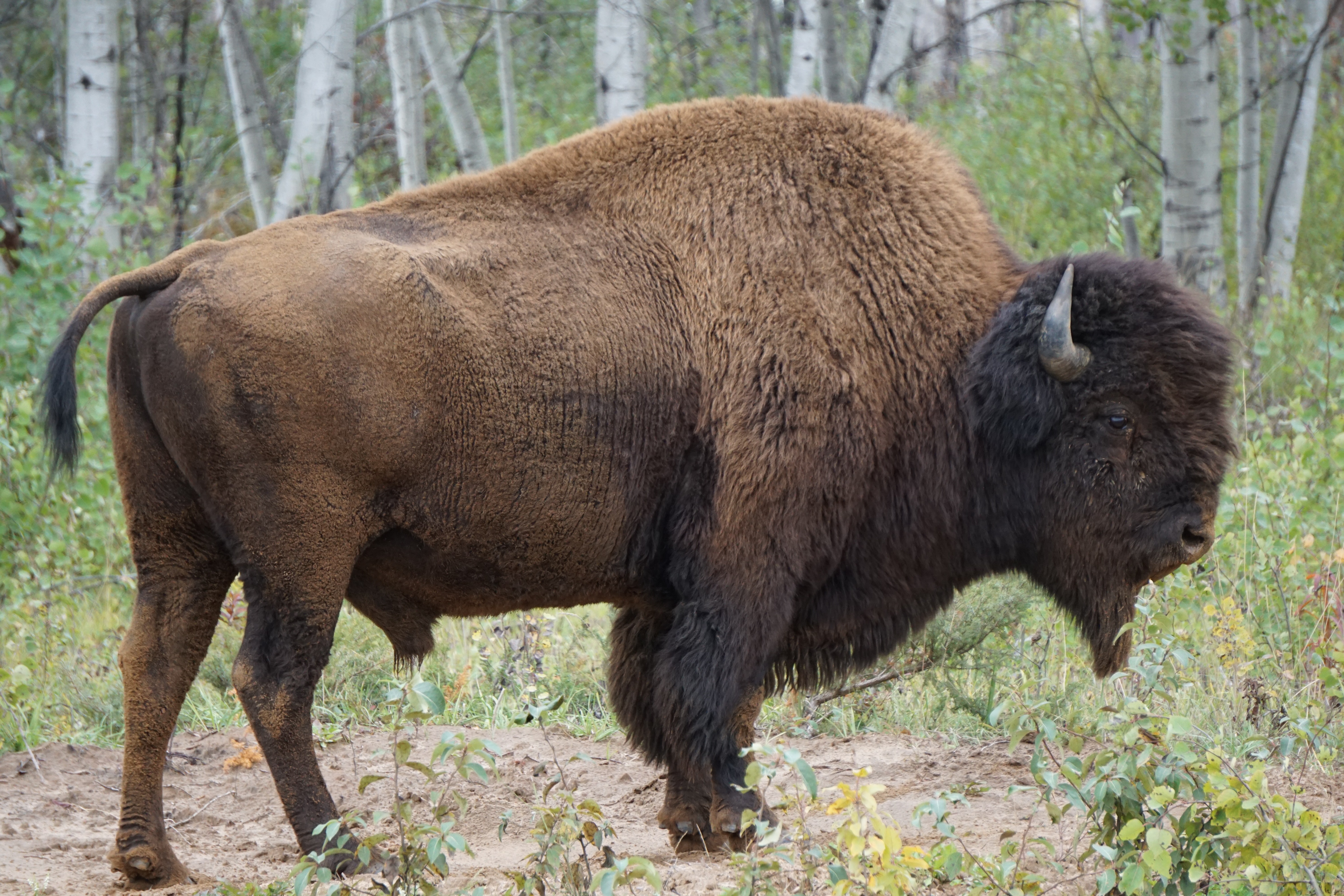 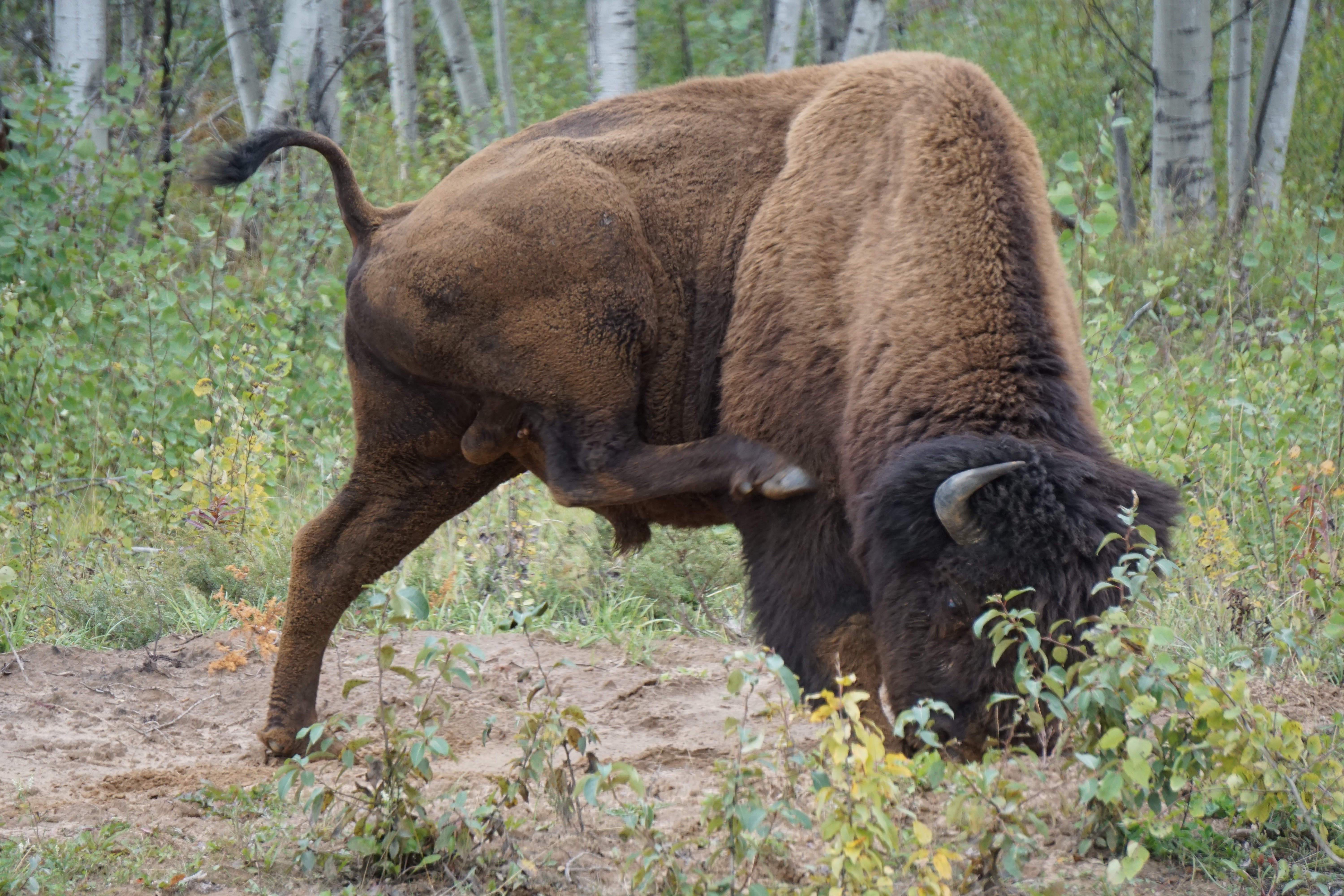 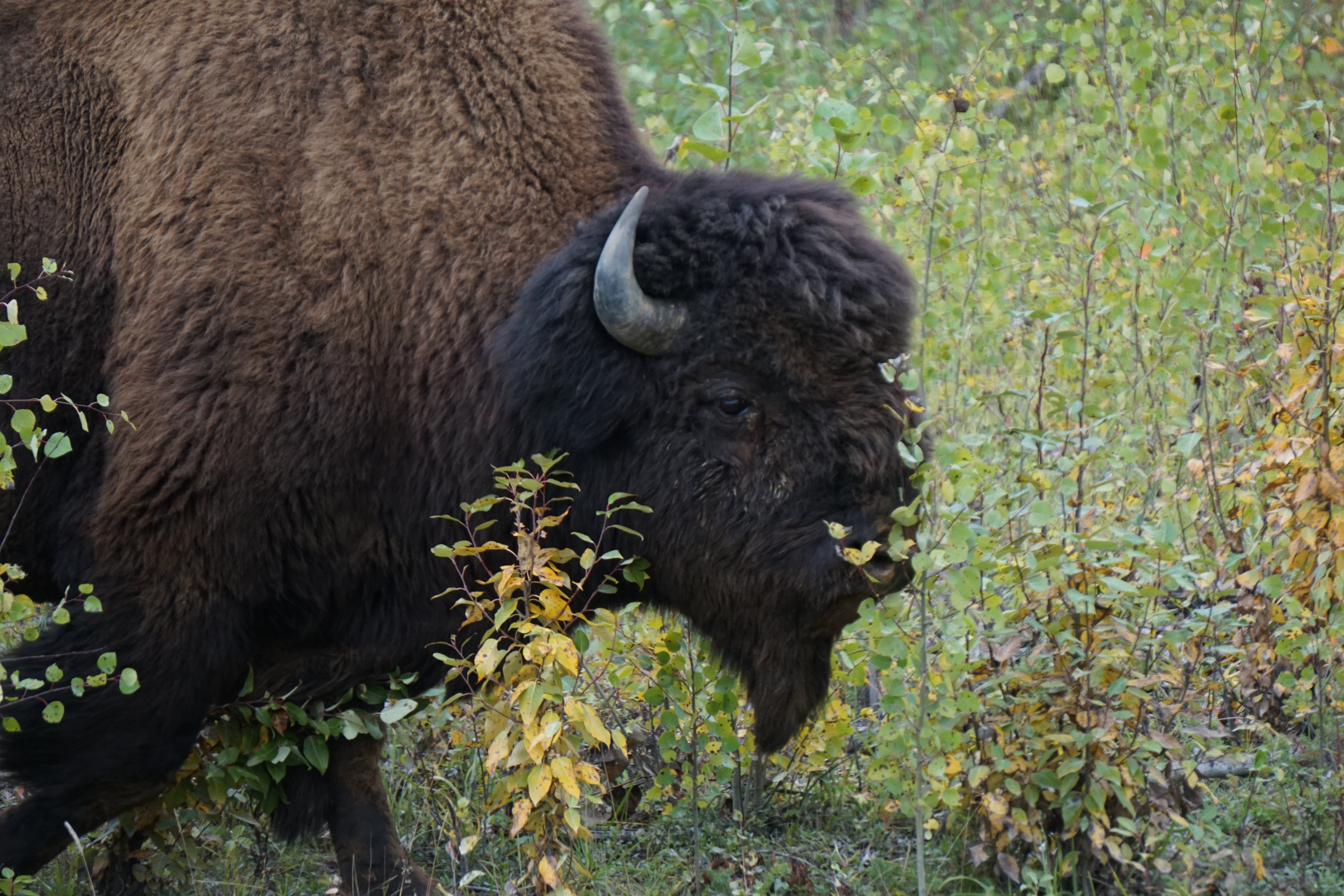 That was when we got back into the construction zone.  Some of the spots to pull off the highway were blocked with construction equipment or were in the construction zone itself so I decided to pass.  We ended up almost leaving the park completely before we stopped at the Angus Sinkhole, the park’s largest sinkhole.  It was formed when the roof of an underground cave collapsed, leaving a sinkhole 100 m wide and 60 m deep.  Thats 330 ft wide and 197 ft deep for my imperial friends.  We walked around the sinkhole, and you better believe I kept the dogs on leash for that walk.  My little monsters have no fear of heights and I could only imagine that they would go right to the steep edge. 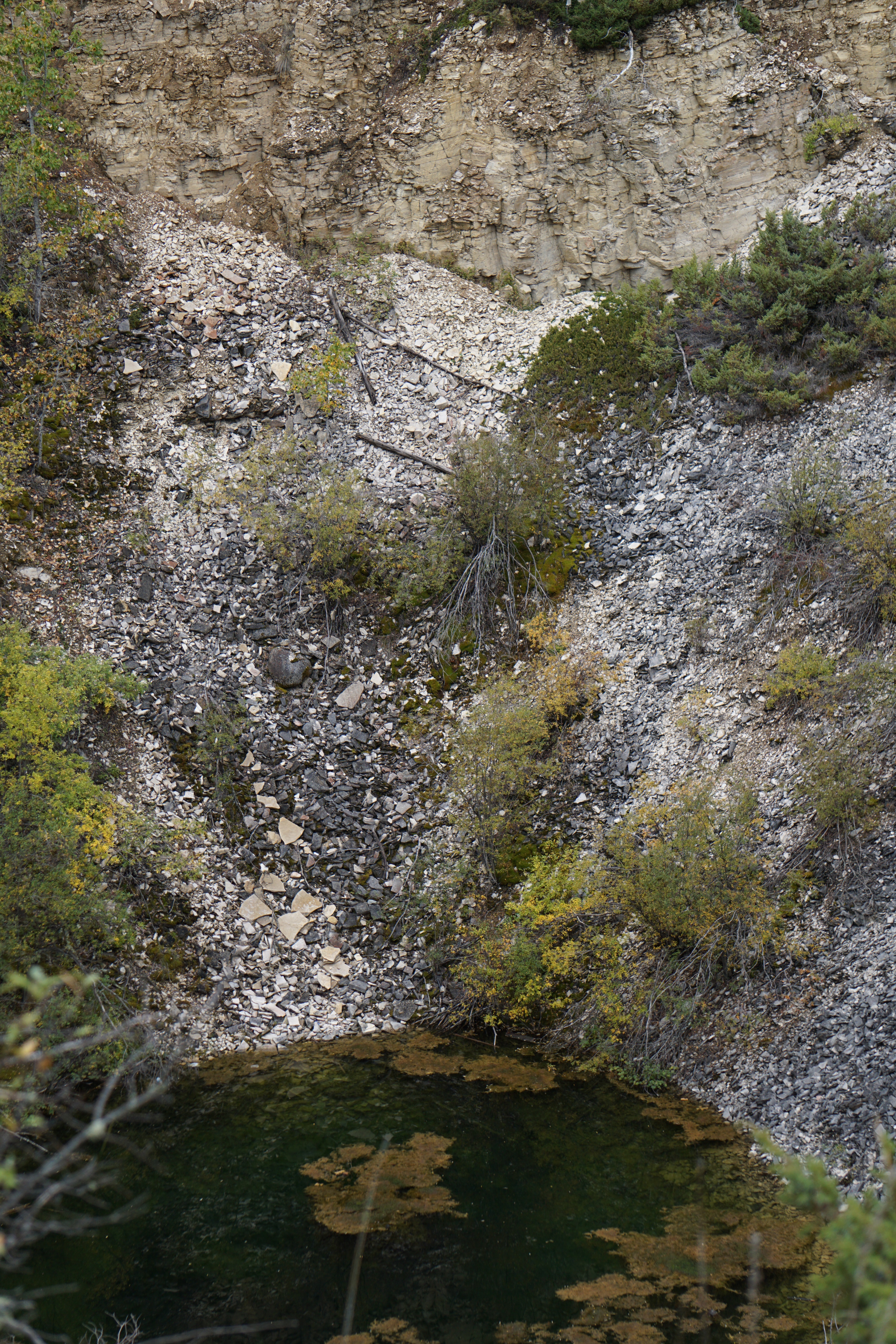 Back in the car, we continued out of the park and into the town of Hay River.  Technically that was the farthest north we went on this trip.  The fact that I was starting to get hungry had everything to do with us making the stop in town at the Driftwood Diner.  I ordered the diner burger (hamburger with bacon, mushrooms, and cheese) which came with crinkle cut fries.  The diner doesn’t have a patio but it does have benches outside so I sat with the dogs and entertained the locals by sharing bits of the burger with the dogs.  It was a really good burger with a deep beef flavour that wasn’t overwhelmed by the toppings.  In fact, everything I saw coming out of the kitchen looked really tasty and if I lived closer, I would probably end up sampling the entire menu.  Not today though.  Back in the car puppies!

As we drove, my eye was drawn to a sign for Alexandra Falls after we had passed through Enterprise.  Naturally we stopped to check it out since I am not one to pass by a waterfall.  There was a trail that led from the parking lot to a set of wooden stairs.  Those stairs could only be described as having seen better days.  Rickety is too kind a word.  Having said that, it was worth the stop.  We stepped out of the trees onto flat rock near roaring water that plunged straight down 32 metres or 105 ft.  There was nothing between us and the water.  Seeing as how my dogs have no fear of water or heights, the dogs stayed on leash.  The powerful river rushing by could easily sweep even Piper away like nothing.  Fortunately, they seemed to recognize the danger and would only wade into quiet eddies that I pointed out to them.  We sat next to the edge as I watched the water tumble down as the dogs seemed to enjoy basking in the sun and the heat radiating from the rock.  While I could have sat there for most of the day, the road was calling so we headed back to the car and continued on.

When we crossed back into Alberta, I noticed the visitor centre was closed.  I guess we were passing through at the tail end of tourist season.  Sobering thought.  We emerged from the northern forests back into the prairies.  At that point, we had been travelling for a while when I found a field on the side of a highway and I let the dogs out to stretch their legs.  Of course I took the opportunity to get a few pictures of them in the wheat.  How could I not? 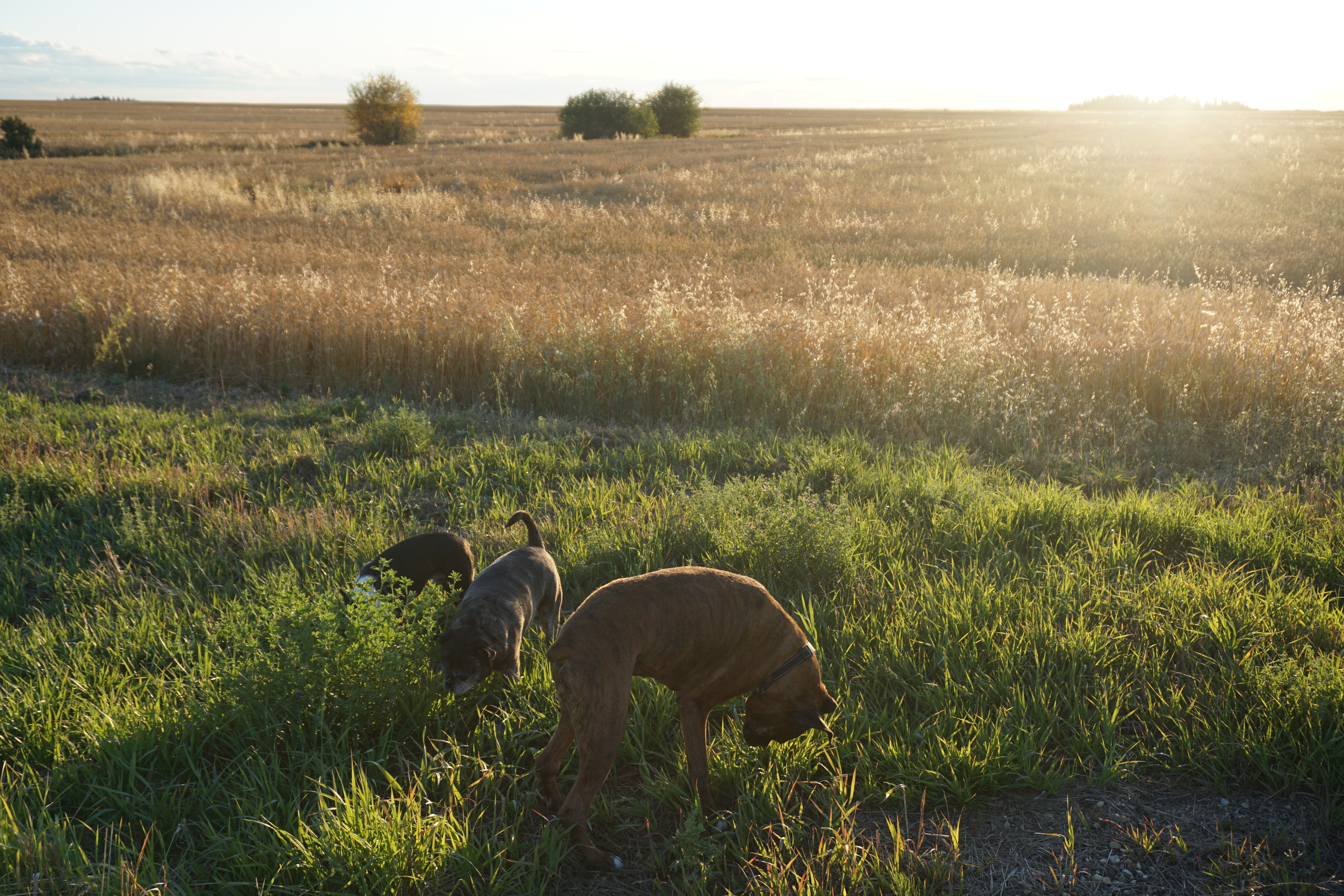 As it was getting late, it was time to start looking for a place to sleep.  When we got to Valleyview I stopped at the first motel I found, Shamrock Motel, and not only were the prices good, but they took dogs.  Too tired to keep looking, I decided that we would be our place for the night.  It was…OK.  There was a strong smell of Listerine in the air and the painted cinder block walls made me think of a bunker but it was good enough for us for one night.  With two queen beds, there was enough room for all of us on one bed or for those of us that wanted to spread out on their own bed (I’m looking at you Leo), there was a separate bed.

The staff recommended that we order dinner from the Burger Baron.  They have pizza and apparently really good fried chicken.  The prices seemed a bit high but I figured I would give it a shot.  I ordered a Canadian pizza, which would be good for a few meals, and when I saw that I could order fried chicken by the piece, I figured I would order a few extra.  I had no idea that I was asking for something difficult.  I could order one piece but when I asked for three, the man taking my order seemed really confused and kept pushing the snack pack which came with a biscuit and fries.  I was like “take the price of one piece and multiply that by three”.  He still seemed really confused so I just ordered the snack pack of two pieces of chicken, fries, gravy, and a biscuit along with my pizza.  The restaurant was less than a kilometre away, as in 900 metres, so I decided to forgo the delivery since I would be there faster and drove to pick it up.  If Piper’s legs weren’t a variable, I likely would have walked to pick it up.  That’s how close it was.

The verdict on the food?  Good but WAY overpriced.  The chicken was crispy but it looked like a bread crumb crust instead of flour.  The fries were meh and the gravy was likely from a package.  The pizza was good enough to fill me up for the night. Let’s face it: what other food can last over several meals.  That’s why pizza is the ultimate road trip food.

With a healthy dose from the road trip bottle in hand and the dogs curled up around me, I watched TV until I nodded off.

Travelling with a Senior Dog