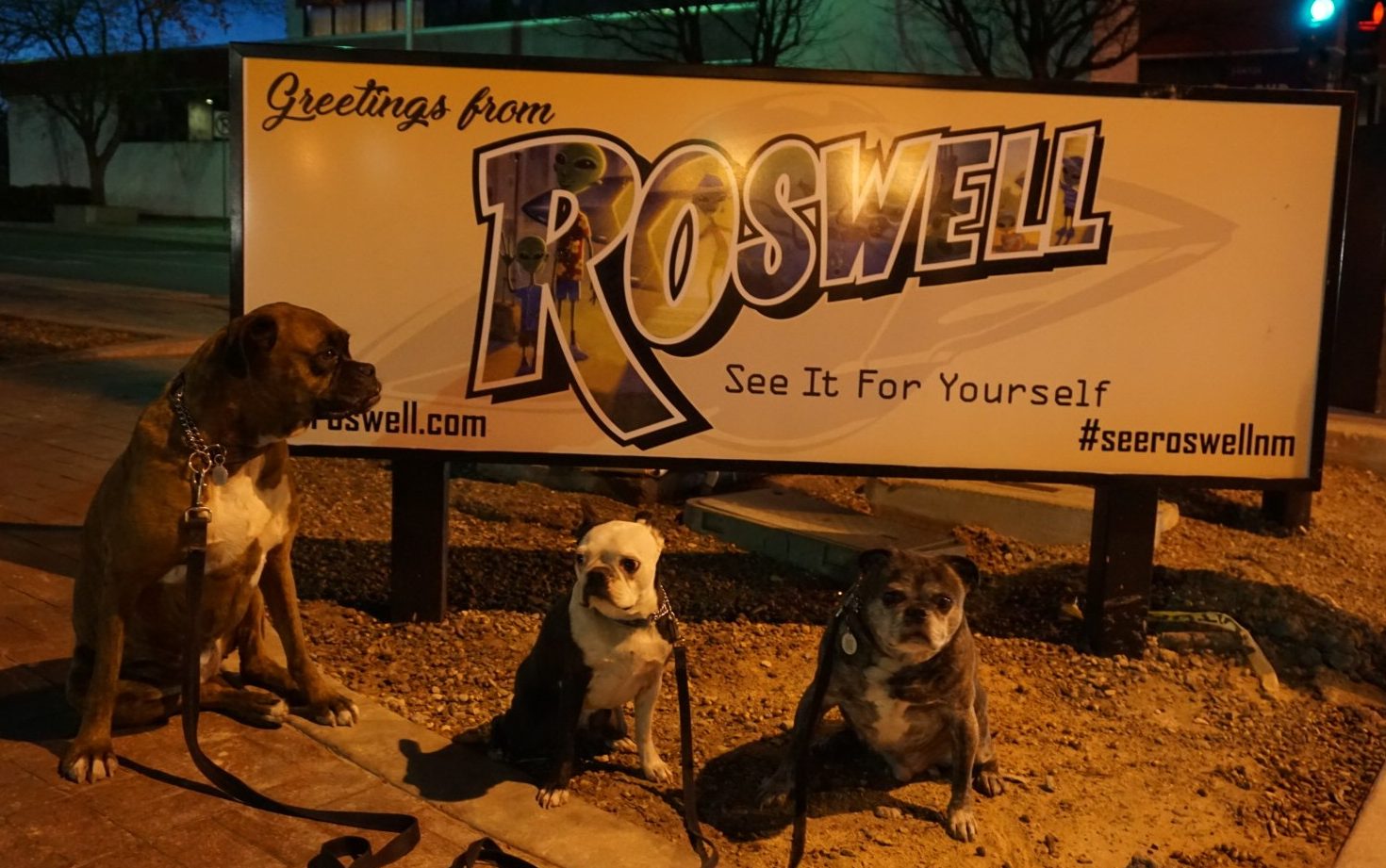 I would have expected that the farther south we went, the warmer it would get.  Nope.  When I brought the dogs out for a quick pee, it was -4 Celsius.  I had heard about the wild temperature fluctuations in the desert but I don’t remember it being this extreme the last time we passed through Arizona and Nevada.  Thankfully I had enough layers for me and Leo’s coat in case he needed it although you’d think it was some kind of torture the way he acts when he sees it.  Yes it fits fine, he just likes being naked.

Once we were all in the car, I drove to The Acai Bar for breakfast.  A healthy breakfast!  I ordered a Monkey Bowl and as I waited, I asked the gentleman at the counter about places that we should go.  I mentioned that I planned to go to Albuquerque, New Mexico and the only reason was so that I could say “I knew I took a wrong turn at Albuquerque”.  He suggested that I go to Santa Fe instead as it would be a more enjoyable visit.  After spending a few minutes chatting, I took my Monkey Bowl and headed out to the car.  Now while my intention was for a healthy breakfast (and with a bowl of acai, bananas, strawberries, granola, and all kinds of other delicious fruits it certainly fit the bill), eating a large bowl of cold fruit on top of frozen blended fruit was not the brightest move I have ever made and I sat in the car shivering with each tasty bite.  The dogs were kind enough to offer to help and they shared the strawberries and banana.

Fortunately, there was a coffee shop in the same strip mall so I went there to get warm and caffeinated.  When I noticed that Evocation Coffee had the vibe of a coffee shop that knows what there’re doing, I ordered a cortado to stay and an americano to go.  A friend got me hooked on cortados and I curse him and love him for it.  A cortado is an espresso shot with a roughly equal amount of warm milk and usually served in a small glass.  As I sipped on the sublime liquid love and waited for my americano (espresso shot topped up with hot water), I asked the woman at the counter if she had any places that she could suggest we visit.  She also said that we had to go to Santa Fe and then promptly began writing out a list.  OK then; Albuquerque was out and Santa Fe was in.  With my hands wrapped around my americano and one of the finest cortados I have ever had warming my tummy, I went back out to the car and mapped out a route to Santa Fe. 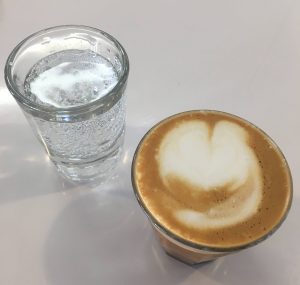 Well the route was pretty easy as I-40 is the quickest way across Texas.  On the south side of the interstate, I saw the Cadillac Ranch, which has a bunch of Cadillacs that had been partially buried so that they were standing vertically from the sand.  I debated turning around to see it but figured we’d stop on the way back.  We did find a rest stop so that the dogs could have a stretch break, and Leo could roll, and then we continued on, getting to Santa Fe shortly after noon.

I was immediately struck by how busily quiet the town seemed: there was plenty of traffic and people were milling about but it didn’t have the hustle and bustle feel of a large city.  Everywhere I looked were galleries and artisan’s shops; it truly is an artist’s town.  We would explore but first food.

The top of the list from the coffee shop was Cafe Pasqual’s and I parked the car, hoping to get something quick.  There was no patio so I would have to get something to go and then when I opened the door, I was met by a sea of humanity in a tiny restaurant.  Oh my.  Weaving around the people waiting for tables, I went to the gentleman at the cash register and after asking about recommendations, he said the mole is some of the best he’s ever had.  Chicken mole it is.  I waited for my food, trying (and failing) to stay out of the way as I asked him and anyone else within earshot about the sights we had to visit.  He gave me directions to Loretto Chapel which turned out to be a short distance away. Finally my food came and I was able to slide out the door.

Bringing the dogs from the car, we sat on some nearby benches and tucked into a really good lunch.  It was different from the moles that I’ve had back home but I suspect that this was much more authentic.  If you go to Cafe Pasqual’s, make sure you pack your patience as it seems like it is perpetually busy but the food is worth the wait.  With a full belly, we set out to explore a little.

Sure enough, we found the Loretto Chapel within blocks of the cafe.  I stood there torn about what to do with the dogs: do I take them back to the car and then park closer or find a place to tie them up outside?  I settled on the latter and found a section of fence where they would be out of the way of everyone and I wouldn’t have to worry about them damaging anything.  Just to be sure, I asked the gentleman at the front counter if they would be a problem there and he said they were fine.  Besides I was only coming to see one thing.

Loretto Chapel is quite small but it is renowned for one feature.  The church was completed in 1878 but there was no way to access the choir loft (I don’t know why they didn’t think about that when they were building it).  The Sisters began to pray to St. Joseph, the patron saint of carpenters, and on the ninth day a man came to the chapel and said he would build the staircase for them.  After it was completed, he disappeared without anyone knowing his name or even paying him.  The story is pretty amazing but then when you learn that the staircase was made without nails, it becomes mind-blowing.  As soon as I walked into the chapel, I was enveloped by a sense of peace and I was almost overcome by the beauty of the building.  It is such a unique place that it was well worth the trip to Santa Fe.  There are plenty of stories about the identity of the mysterious stranger and some have even said it was St. Joseph to answer the prayers of the Sisters.  Having grown up around carpenters, I can say first hand that the staircase is a stunning piece of a craftsmanship.  You can read here for the official story about the staircase. 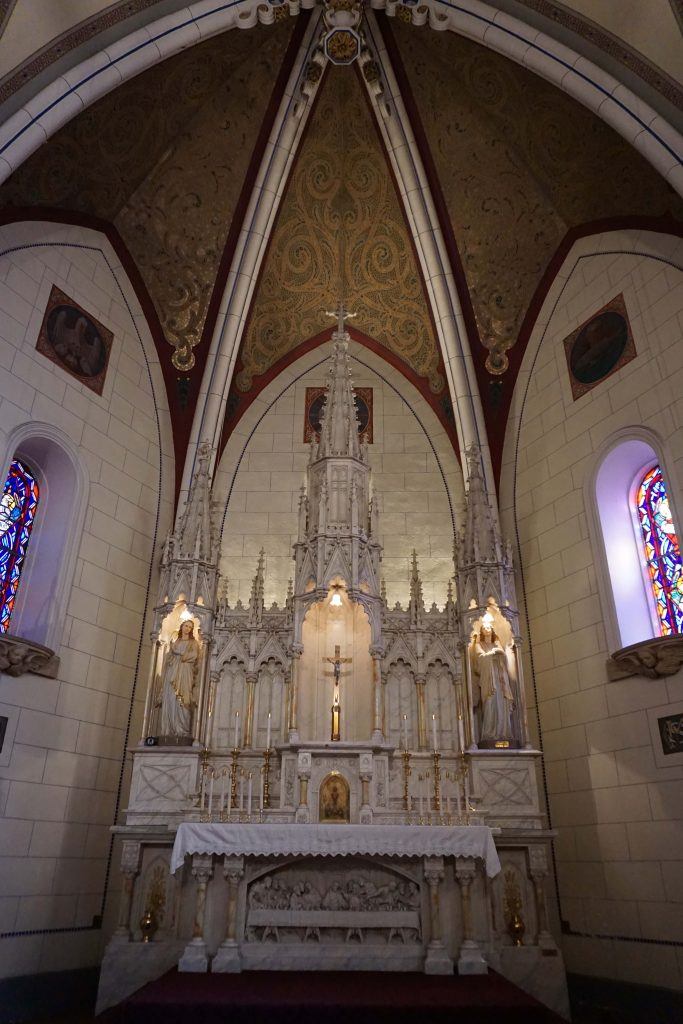 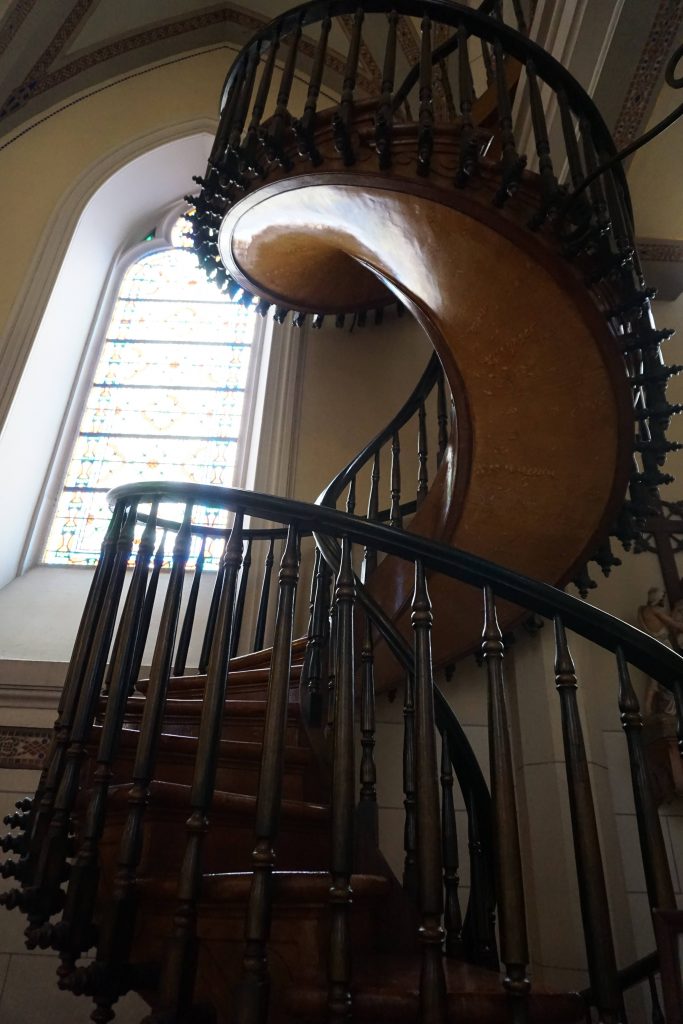 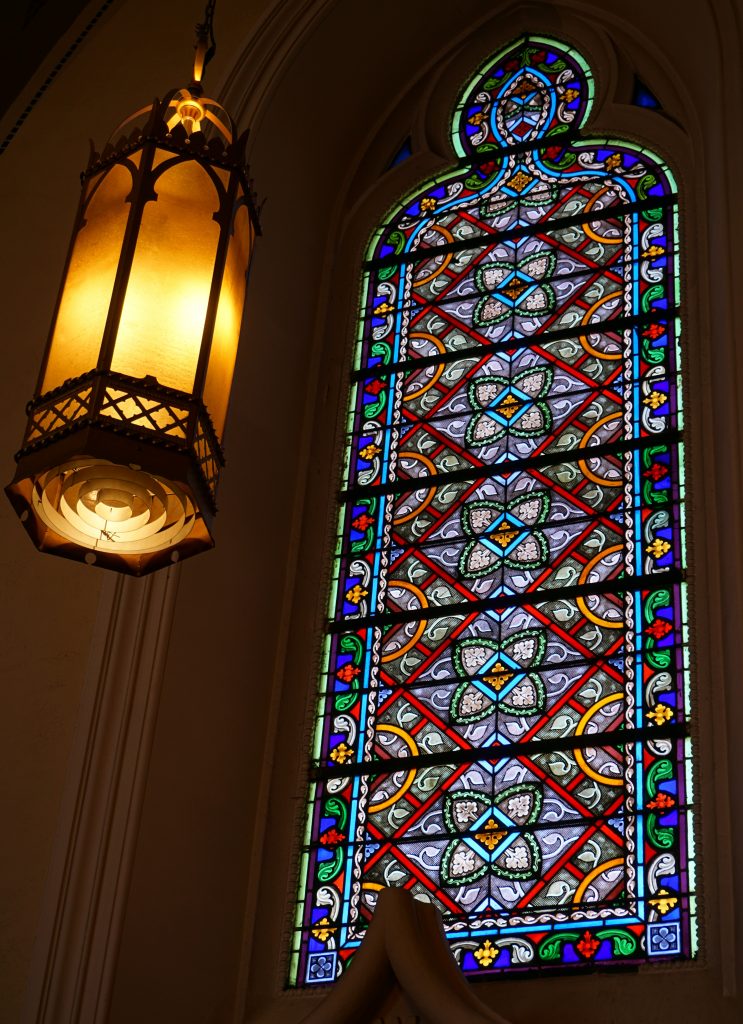 I collected the dogs from where they were patiently waiting for me and we walked back to the car.  Santa Fe had been a short detour and we turned to go back the way we came to continue to our real destination which lay several hours south.  Having said that, we weren’t in such a rush that we couldn’t stop at Sierra Blanca Brewery in Moriarty since we were driving right by there anyway.  I was a little worried that I had taken a wrong turn off the interstate as I was driving through an industrial area but then finally we found the lot.  I was going to just grab something quick but then I saw the wall o’beer and found out they were dog-friendly, well we were going to linger a little. I happily sampled and tasted and worked my way through a tiny portion of the extensive list of beers offered while the dogs made themselves the official greeters.  I was blown away by a cherry wheat beer and an incredible whiskey-barrel aged stout that was ridiculously smooth.  After loading my trunk with beer and a few souvenirs, I took the dogs to check out the beer garden.  I was a little sad when I realized that we had come way too early in the season to enjoy the beer garden and even more sad when I figured it was time to go.

We were driving south on highway 285 when I saw what looked like men facing each other across the highway.  I got closer and the men got bigger…and even bigger.  I realized that I was looking at two giant pictures of cowboys.  There was nothing around to explain why there were two cowboys arguing with each other.  It turns out that it is an installation called “Cowboy Ruckus” by artist John Cerney who specializes in these kinds of larger than life installations all over the United States and even into Canada.  You can see more of his work here.

We rolled into Roswell later than I had planned but at least we were there.  Finally, after years of hearing about Roswell, I finally found myself there.  What’s so big about Roswell, New Mexico?  Any conspiracy theorist worth their salt knows the story: that on July 4, 1947 a rancher found strange debris in his pasture just outside of Roswell.  He called up the sheriff who in turned called the military and officials attended the farm, gathering as many pieces that they could.  Newspapers reported that the debris belonged to a “flying saucer” but the story was soon retracted and the official statement was that it had been a weather balloon that had crashed.  The story has evolved to include alien bodies and that the “weather balloon” was actually part of a top secret military operation called Project Mogul.

As we drove downtown, it was obvious that Roswell has completely embraced it’s claim to fame.  There were aliens EVERYWHERE, from signs to the light posts.  We stopped at Big D’s Downtown Dive and I popped in to get a green chile cheesesteak with sweet potato fries.  As it was cold outside, I sat in the car in the dark and inhaled one fine sandwich.  Needing to work off said fine sandwich, I brought the dogs out of the car and we wandered around downtown, enjoying all the aliens we saw.

Back in the car, we drove to our Airbnb which was about 20 minutes outside of Roswell.  My host gave me the tour and then was so taken with the dogs I felt as though I was almost an intruder.  She even went so far as to cut up a treat bone for them.  She was so determined to give everyone a piece that she destroyed the blade of one of her knives to do it.  She merely shrugged it off and said she used the knife anyway.  Once everyone was settled, we climbed into bed and passed right out.

Missed out on the start of the trip? Click here to follow from the beginning.  Or check here to read about our next day in Roswell.