The Newest Member of the Pack (and Introducing a New Dog) 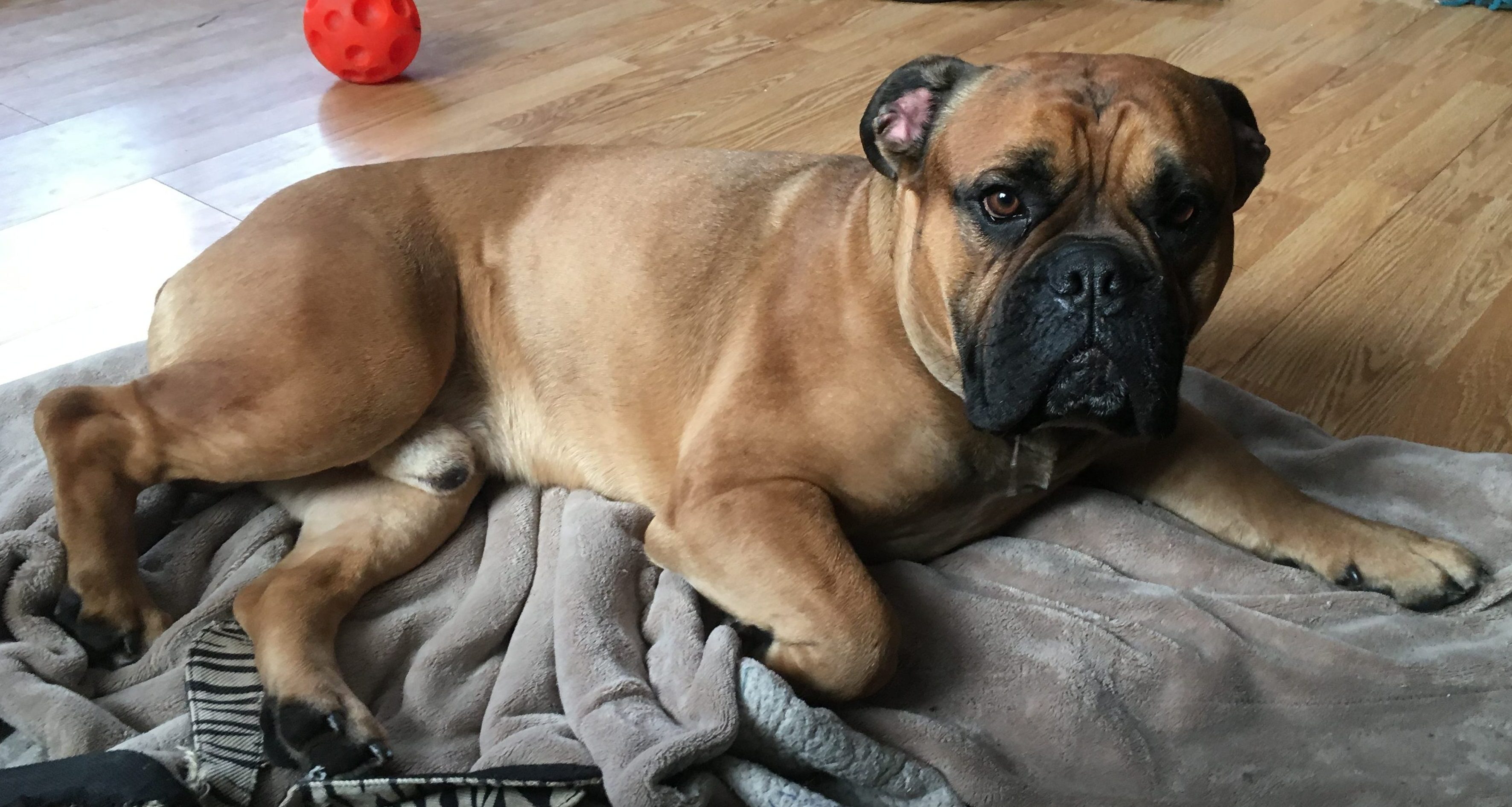 After losing Piper, I was asked several times if I would get another dog. I always said that I wasn’t going to look for one but if a dog happened to need a home, I’d consider it. Then one day towards the end of January, my boss walked into the office, looked at me, and said “Do you want a dog?” The only thing I said was “No. Tell me more.” He knew someone that was trying to find a home for King, their Old English Bulldog. My boss did warn me that he was going to need some work but he was a good dog.

The owner and I set up a meet and greet with my boys and King at a dog park. Luckily we were the only ones there which was likely due to an ongoing deep freeze in southern Ontario. The boys were released and while I saw some displays of dominance, I was most concerned about any signs of aggression; luckily I saw none. I just saw a young dog that was lacking in some socialization and needed to be neutered. I don’t think anyone is surprised that I picked up King a few days later.

I made several stops on the way home including taking King for a hike in the local Country Preserve to help burn off some energy and then at the pet store for a new martingale collar. He looks quite stylish in burberry.

Once we got home I brought Jack and Leo out of the house, collected King from the car and we went for a group walk. It was slow and awkward but by the time we got back home, there was some semblance of a pack. Then for the next six hours I questioned every decision in my life that led to that point in time as King tried to hump everyone and everything. He chased the cats. He pestered the dogs. I felt like I was at the centre of a three-ring circus. Eventually, it calmed down enough to go to sleep and when King realized that he was allowed on the bed, the smile on his face melted my heart.

The next day I was on the phone with the vet as soon as they opened to get King in for his shots and pre-neuter bloodwork. We were sitting in the exam room when one of the vets walked in, looked at me, and said “What did you do?” All I could do was shrug and point at King. Needless to say, he won over everyone at the vet’s office.

His new life has been something of a whirlwind between moving to the country, hiking his butt off (he lost almost seven pounds in the first 10 days), getting neutered, and the pack even came to work with me one day.

He’s still a work in progress but he is well on his way to settling in as the newest AdventureDawg. Welcome to the family King.

After all the cute pictures of the new guy, read below for our tips about introducing a new dog.

Bringing a new dog home came be an exciting as well as a stressful time. Here are some things that I have found helpful in making the transition as smooth as possible:

If you already have an established pack, be honest with how their personalities are going to adapt to the new dog. If you have a house full of seniors, consider how the addition of a high-energy puppy is going to affect them. King and Leo’s personalities are actually very similar so I was not concerned about them adjusting. In fact, they are too similar and Leo is now on the receiving end of a little bit of karma. Try and introduce them on neutral ground before deciding to bring the new dog home.

Stack the odds in your favour

Get everyone exhausted before they meet. Introducing dogs when they’re crazy hyper may not work out well. Unfortunately a polar vortex wasn’t doing me any favours in the case of King.

King came to me as an intact male. In my personal experience I have found that can be a trigger for other dogs and is part of the reason why most dog parks ban intact males. The tendency for dominance as well as the rampaging hormones is something that you need to be prepared for.

Go for a pack walk

This is a huge help for them to get acquainted without focussing on each other. It’s a lot easier if you have more than one person so that you’re not tripping over or getting tied up in leashes, as I have learned. It’s also a great way to introduce dog friends.

When I brought Leo home, he seemed to mesh as though he had always been there. King on the other hand was a ball of tightly wound energy that reminded me of what it was like to babysit a toddler; if the toddler was almost 80 lbs and humped everything. It may take several days for the pack to develop any kind of cohesion but with patience and persistence, it will happen.

Determine what the rules of the house are right off the bat and stick with them. If your dog is not allowed on the bed, then they should never be on the bed. It’s not fair to them if the rules change.

As much as I would like to just open the door and usher the dogs in, they may need to take things a bit slower. I wouldn’t lock a dog in a separate room shut away from everyone but I would consider placing a crate in a busy but out of the way place so that the dog can become familiar with the sights and smells of their new home, especially if they are already crate-trained and see it as a place of comfort. Even placing the dog in a room with a baby gate across the door allows them to be included in the house.

Food can often be a trigger for undesirable behaviour so make sure that you maintain control when feeding. Food aggression is one of the things that I will absolutely not tolerate in any of my dogs. I have my dogs sit as I place out their bowls and when they are all settled and calm, I release them from the sit and allow them to eat. I also will take the food bowl away or stick my hands into their bowls to further establish my control over food. So take that to the guy in Golden B.C. that said my dogs weren’t trained while yours was running around a patio and wandering the street.

Just like bringing home a new baby, make sure that the new dog isn’t usurping all your attention. Spend equal time with each dog, starting with the established pack leader (after you of course). The new dog may try and intercede since they’re feeling ill at ease, but they have to learn that you don’t belong to them; it’s the other way around. If they monopolize all your time, they may start to get possessive of you and won’t let the other dogs get close.

Don’t be afraid to ask for help

If things aren’t working out despite your best efforts, or if you want guidance before you bring home a new dog, contact a local trainer. The goal is a happy pack, not a fragmented household.

Do you have any other tips or tricks for introducing a new dog?