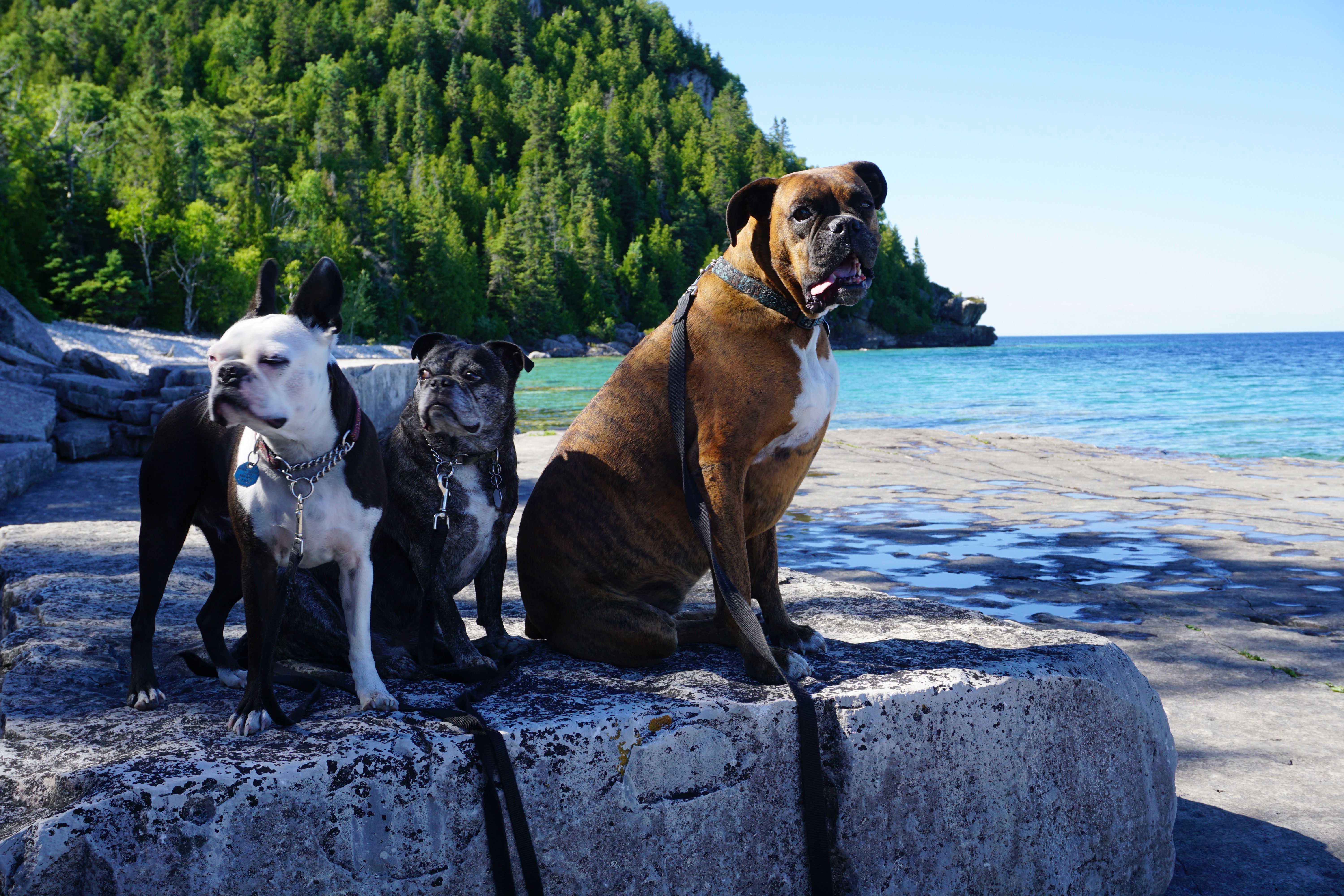 So your car has been checked over and is good to go.  You’ve gathered the generic stuff for the car.  Now let’s look at some of the things you’ll want for your four-legged travelling companions.

I feed my dogs kibble which makes travelling much easier since I don’t have to worry about cans or keeping raw food cold.  I know some raw foods are dehydrated and if I was going to make the switch, that is probably what I would use.  The most important thing is to make sure you bring enough food to last the entire trip and then some extra.  Even if you use a nation-wide chain brand, there will be places where you cannot find a store or they could even be sold out.  So why risk it?

I pack kibble into large zip top bags and keep those in one of the bins.  That way, I can grab a bag and transport from the car to the room if we’re staying in a hotel or pour it out into the bowls if we’re camping or stopped for a snack.  It’s another way to prevent water from destroying all the food and I can carry a bag easier than trying to lug a bin or having to move things to get at the bin several times a day.

If you want to take it one step further and your dog is on a fixed portion size, you can even pre-measure each meal; that way all you have to do is open and pour it out.

I love collapsible bowls and have two different models which gives me three sizes.  I have a large fabric bowl which I only use for water, two larger plastic ones, and two smaller plastic ones.  The plastic ones collapse flat meaning they take up very little space.  The fabric one came in a handy carrying case that I could run my belt through if I were so inclined.  The big one I use strictly for water.  The dogs don’t really like it so I usually only use it when we’ve set up camp for the night.  I use the large ones for water during rest stops and when we’re done for the night, one gets used for Piper’s food.  The other I use for water if we’re in a hotel.  The two little ones are for Jack and Leo’s food.

I keep two large Nalgene water bottles with me for water.  That is the minimum although I usually have two additional steel water bottles.  It lets me give them fresh and clean water anywhere.  I like the large mouth on the Nalgene bottles and is easier the negotiate with more tap systems.  Or if you pour from a pitcher of ice water, it keep the mess down a bit.  When we were heading south into Arizona and Nevada, I also brought a gallon jug of water; just in case.

They wear their collars at all times and I keep their main leashes in the front seat with me.  I also have spare leashes and collars that I keep with the ropes and bungee cords.

I have a plastic-coated wire tie-out.  It’s basically a clothes line with clips on either end that allows me to use it in various ways: I can put it through the handles of the dogs leashes then run it between two fixed objects like trees or around an object and clip it to itself.  I’ve even wrapped it around one of my car tires when there aren’t any trees or other things to fasten it to.  It gives me a chance to set up camp without having to worry about the mischief they’ll get into and every campground I have ever been in requires that dogs be kept on leash.  They usually get the leashes tangled up a little but for the most part they just sit down and watch me.  I’ve considered putting them all on a separate tie-out but then they would take up so much space that I would basically have to keep them on such a short line that it would almost be cruel and counter productive. 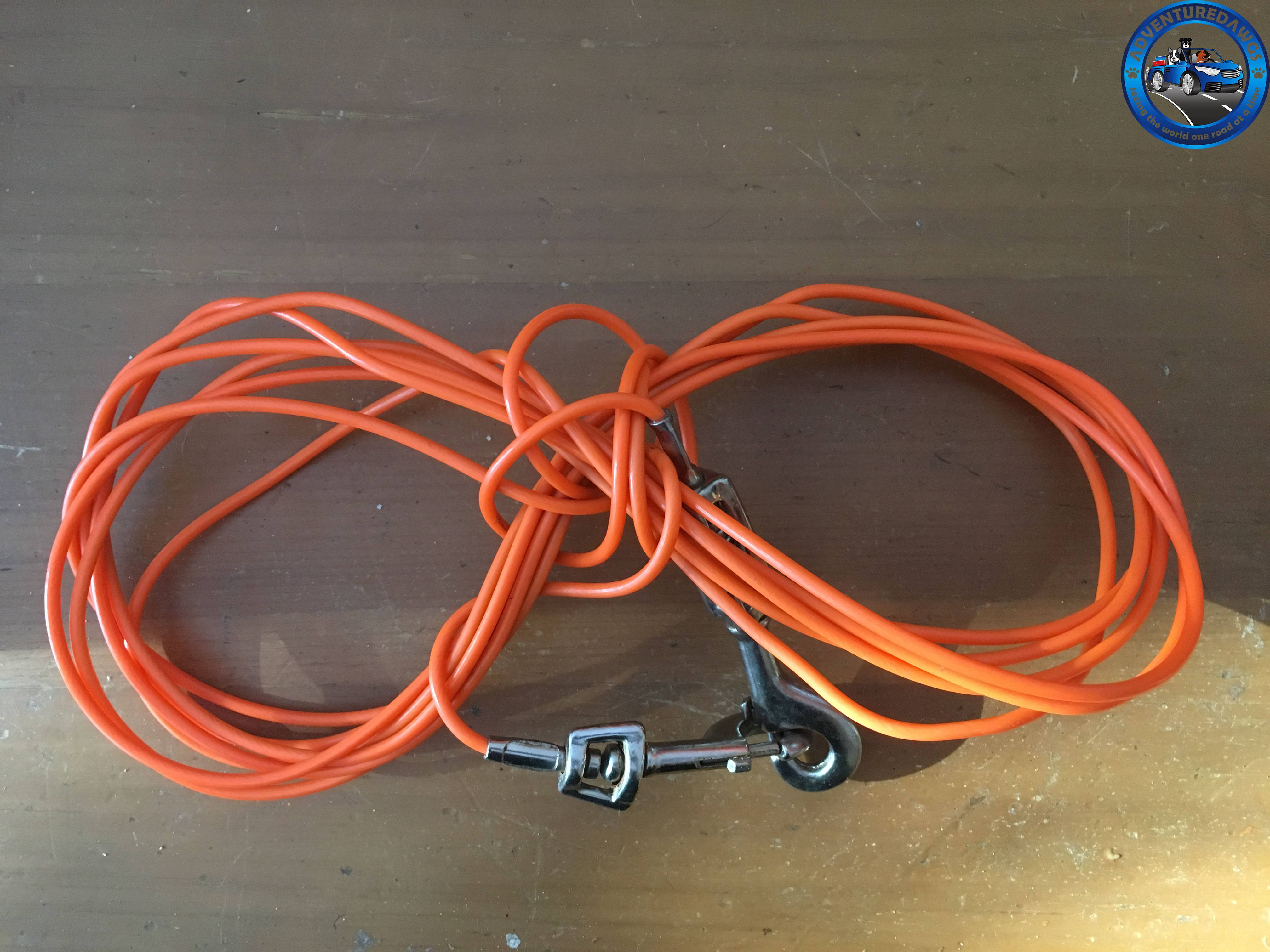 I have a bunch a carabiner-style clips that I bring.  I pretty much always have one clipped to one of the belt loops on my pants so I can attach the handles of their leashes and go hands-free.  They are also helpful for attaching their leashes to the tie-out so I don’t have to unsnap it to take them for a walk.  That’s more for convenience but at least one for walking is a must.  They don’t have to be climber-grade clips but I have had some cheap ones that broke just from light use.  Another great thing with the clip is that I can use it to attach their leashes to something before running into a store or washroom.  I just snap it to the leash handles, wrap it around, and snap onto the leashes.  Quick, easy, and secure.

I like keeping the dogs in harnesses when we travel because…well let’s face it: I only have so much space in my car and crates just won’t fit.  There are two main styles that I have seen: Piper wears one that has a strap that clips into the child seat attachment.  It usually stays attached because it’s bit of a pain to unsnap it every time we get out.  That’s why Piper is often seen naked while Jack and Leo are wearing their harnesses.  Jack and Leo’s harnesses have a loop that you run the seat through and secure.  The loop has a a clip and that snaps onto a ring on their harness.

Some people think that strapping their dog down is cruel but I think it’s crueler to let your dog become a missile if there’s a collision.  Also, the dogs can interfere with your concentration if their moving around or decide they haven’t told you that they loved you enough and decide to stick their nose in your ear or slobber all over your face.

On a side note, I’m going to be doing some research into harnesses and road safety since I understand that there are actual crash tests being done into their safety.  Stay tuned for that.

I was going to get them harnessed up for a photo shoot but I had nowhere to take them and they get SO excited when the harnesses come out it felt like it would be a tease.  So here are a few pics from the vault.

If you plan on crossing the Canada/United States border, you’ll have to have copies of vaccination records, especially rabies.  I keep copies of their vaccination records in a plastic envelope in the glovebox with their information taped to the front and I also keep a copy in my backpack.  The weights are there just in case I need to administer any kind of medications.  I believe that any time I can reduce thinking should we find ourselves in a panic situation, it will help things go smoother.  It also helps if I have someone else with me or if we have to rush into a vet’s office.  In reality, a vet will weigh them anyway but this makes me feel more secure that I have all the information handy.  Peace of mind and all that. 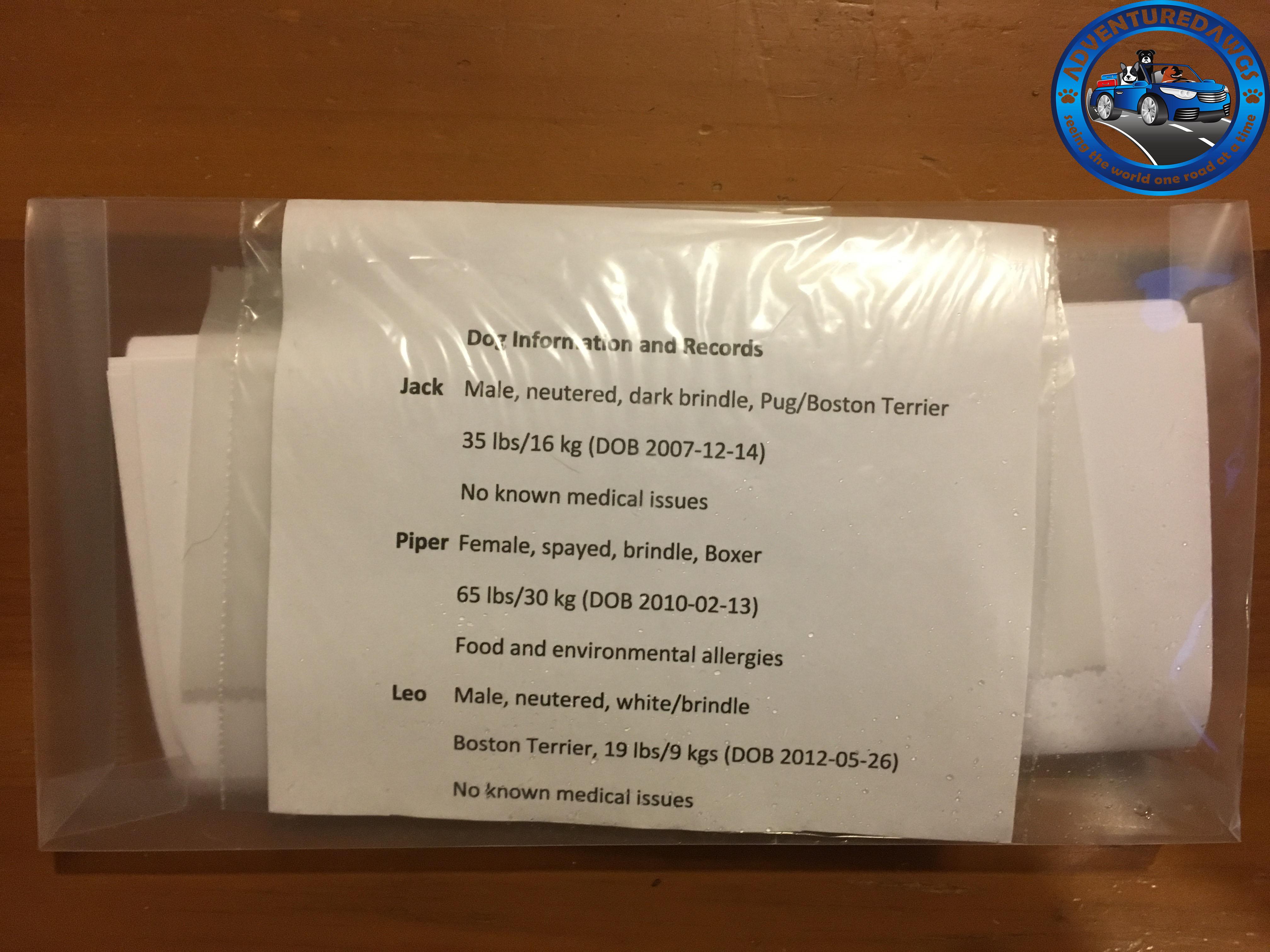 If your dog takes any kind of medications, make sure that you have more than enough to last the trip.  I know it sounds like I’m harping on carrying more, but you’d hate to run short because you spilled some.  If it’s a liquid, then bring some extra syringes so you don’t have to worry about losing one.  Of course, you could always keep one tucked away in your first aid kit.

I have several thick and warm blankets that I keep in the backseat along with a few towels.  I also have a down comforter that comes with a stuff sack so it packs into a small space yet is quite warm.  And I have an old sheet that goes into the backseat that I use as a base layer in the tent.

Always stoop and scoop.  They also work as garbage bags or if you have a container that suddenly springs a leak.  Heck, I’ve used one to tie up a piece of plastic that came loose from the bottom of my car.

If you’re going somewhere cold, does your dog have coats that they wear?   If you normally put a rain coat on them, make sure you bring that.  What about booties or paw protector cream for snowy trips?  If you plan on hiking on sharp rocks then you’ll definitely want to protect delicate tootsies.  They don’t have to cost a fortune since there are plenty of patterns online to make your own boots if you’re so inclined.

Have I forgot any dog gear that you like to carry?

Next is up is gear for people.  There are a few other posts that have popped into my head from our travels.  It’s funny but once you start actually thinking this stuff through, what at first seemed like it would be a quick post explodes into a whole series.  I’d love to hear any ideas you may have as well.