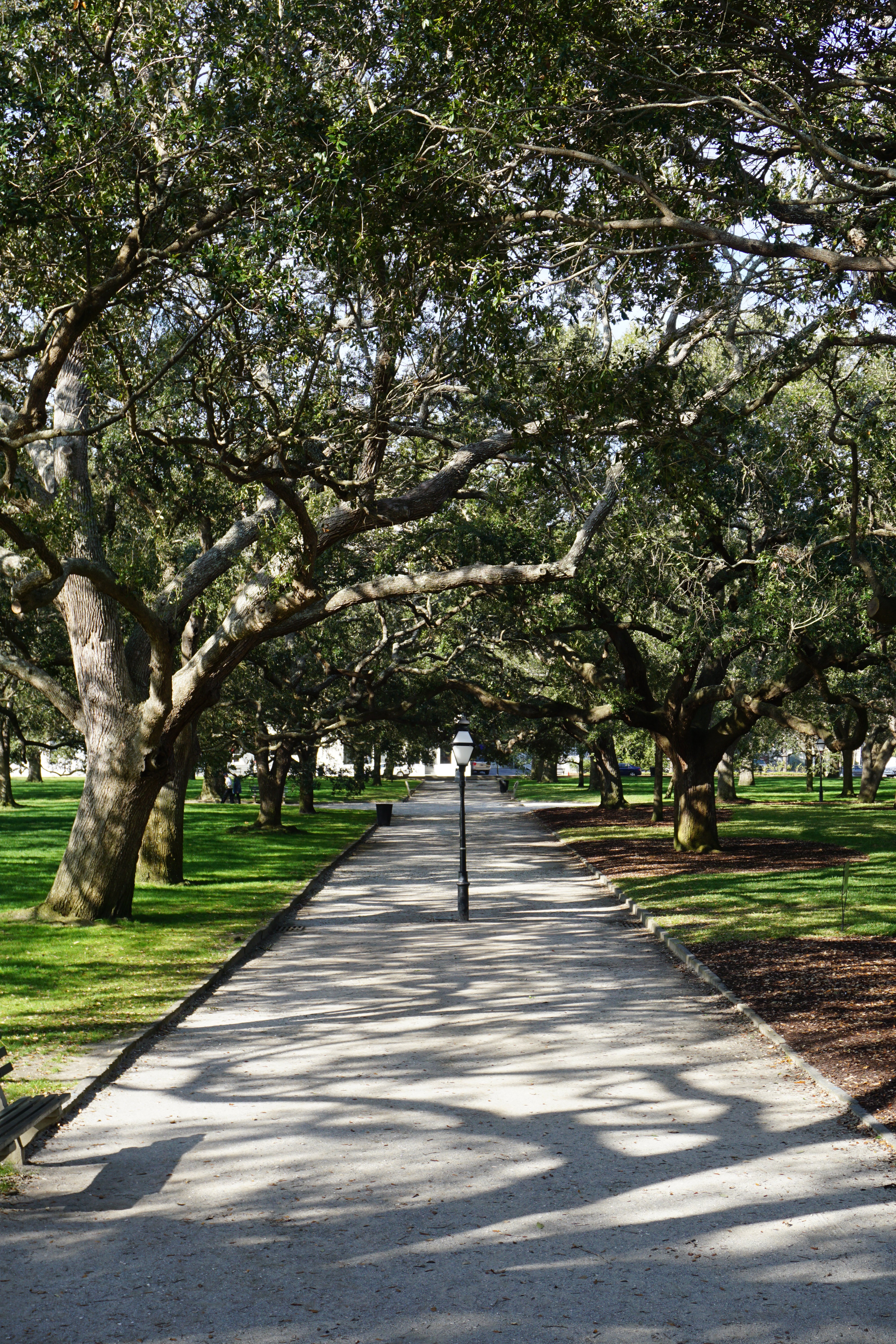 Shortly before Christmas, I had the opportunity to take a short me-cation, as in a trip without the dogs.  With funds and time something of an issue, I decided to return to Charleston, South Carolina.  We had been there earlier in the year but the high heat and humidity had put some restraints on our exploration.  That and three dogs tends to affect the places a person can visit.  Now I had planned to try and do this all in one post but I just couldn’t limit the photos that much.

I have a good friend that takes care of the dogs when I’m at work and the few times I go away without them so I knew that they would be well-cared for.  Thursday night was my work Christmas party and for some reason I thought it would be a good idea to fly out Friday afternoon.  I had decided that I was going to pack light and only bring a backpack, my camera case (of course), and I wasn’t going to rent a car but use ride sharing like Uber and Lyft.

When traveling to Toronto’s Pearson International Airport, I highly recommend taking the UP Express (Union-Pearson Express).  It’s a short train ride from downtown Union Station with two stops at Bloor Station and Weston Station before Pearson.  It initially was almost prohibitively expensive, costing approximately $25 per person each way.  Once the fares were lowered to a more reasonable $12.35, it became a much better way of getting to and from the airport.  I LOVE this train.  It takes 20 minutes from Union to Pearson.  You cannot drive to the airport that quickly and since I work close to Bloor Station, I leave my car at work and hop on there.  A note about Bloor Station: since it is also a stop for the GO Train, there are two different platforms and I was waiting at the wrong one for a little while.  Fortunately I figured it out.  Given the late party night, I was not operating at peak brain power.

I checked into the airport and because I had given myself plenty of time, well I had plenty of time which is too bad because Pearson is kind of a boring airport.  I know because I practically did laps around Terminal 3, partially to waste time and also to look for food since my appetite was starting to come back.  I saw the same fast food places that dot any urban setting.  Finally I decided to sit at The Hearth.  I wasn’t sure what to order but my server came by with a plate of fish tacos that had been ordered by the people who had been at the same table but had to leave for their flight.  Well if that isn’t a sign I don’t know what is.  The tacos were very tasty and the fries were crisp without being too crisp.  It was a great meal but a little on the pricey side.  Having said that, everything is more expensive at the airport since you really don’t have a choice about where you’re going to eat as you are stuck at the airport.

I had a stopover in Chicago’s O’Hare Airport which on paper was one hour but was actually two because Chicago is an hour behind.  I went wandering around and was blown away by one colourful corridor and a dinosaur.  It’s a much more interesting airport than Pearson but soon I had seen everything I wanted to see.  I was going to stop for a sushi snack but once I saw the price list…ummmmm no thank you.  I’ll just go wait for my plane. 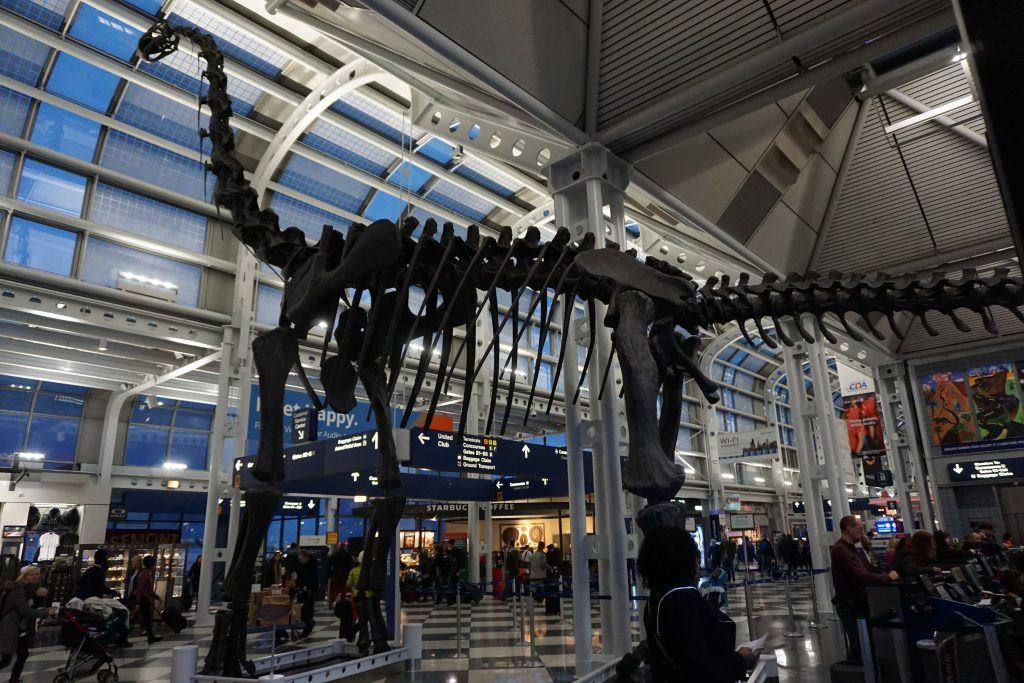 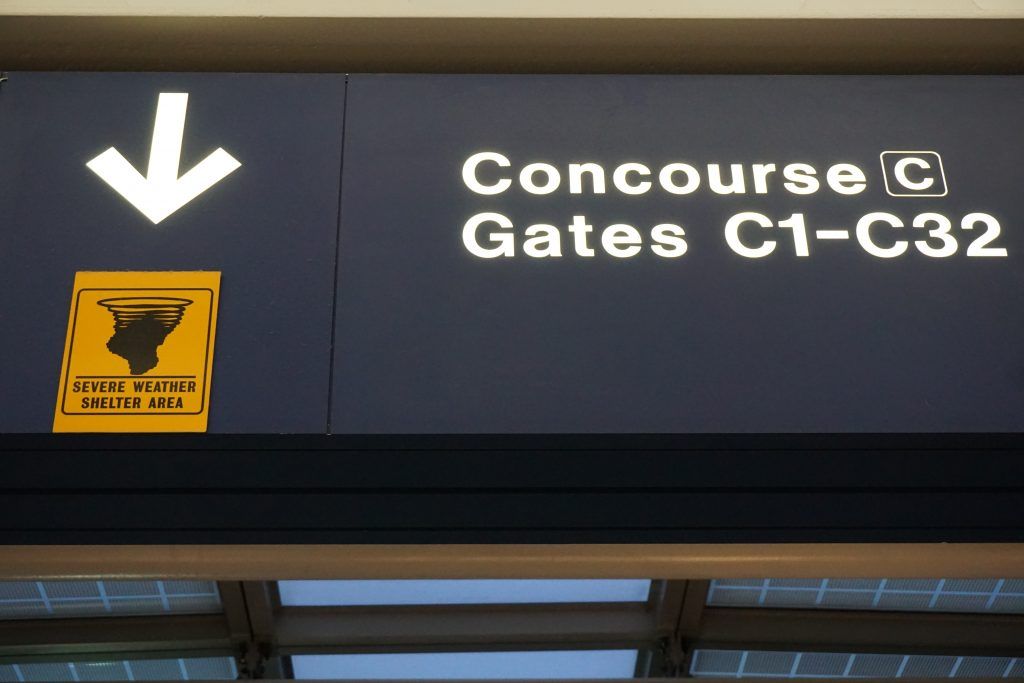 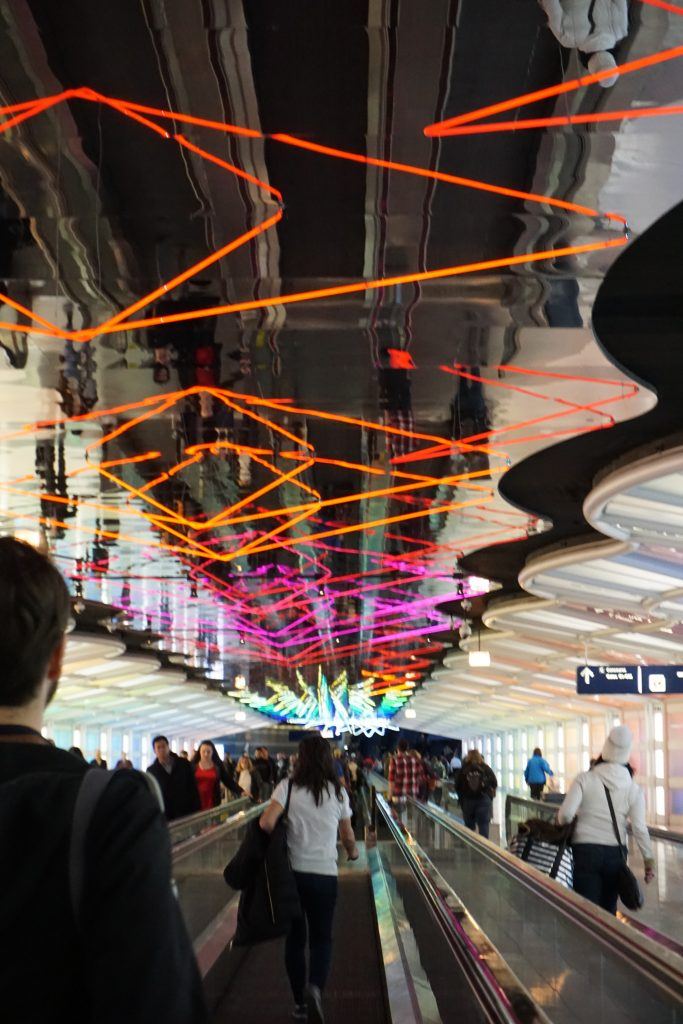 I landed in Charleston around 9:30 pm and walked straight out to a waiting Uber.  About 10 minutes later, I was at my Airbnb and met my host, Tim, who gave me a tour of the house which included meeting Smokey the greeter cat.  I was settled and asleep in no time.

Saturday morning I was up early and caught a ride downtown.  There were plenty of suggestions for breakfast but since I was in the south, I figured biscuits were in order and I went to Callie’s Hot Little Biscuit on King Street.  It’s a tiny storefront and even though all the reviews I had read mentioned lines stretching out the door, I apparently arrived before the big rush.  I ordered the bacon, egg, and cheddar biscuit and just because I can, I ordered the three little biscuits and choose blackberry, cinnamon, and peppered bacon.  Naturally I ordered a coffee as well.  There is very limited seating, only a short counter along part of a wall, and every seat had a coat slung over the back so I had to go find somewhere else to eat.  Luckily it wasn’t too cold for this northern girl and I found a table and chairs that had been left outside a bar just down the street.  The breakfast biscuit was very good although I found it to be very crumbly.  I don’t know if that’s what southern biscuits are supposed to be like but it was still delicious.  The mini biscuits were perfect little nibbles.  The blackberry was my favourite, then the cinnamon.  I really wanted to like the bacon because, well, bacon but the pieces of bacon in the biscuit had next to no flavour. 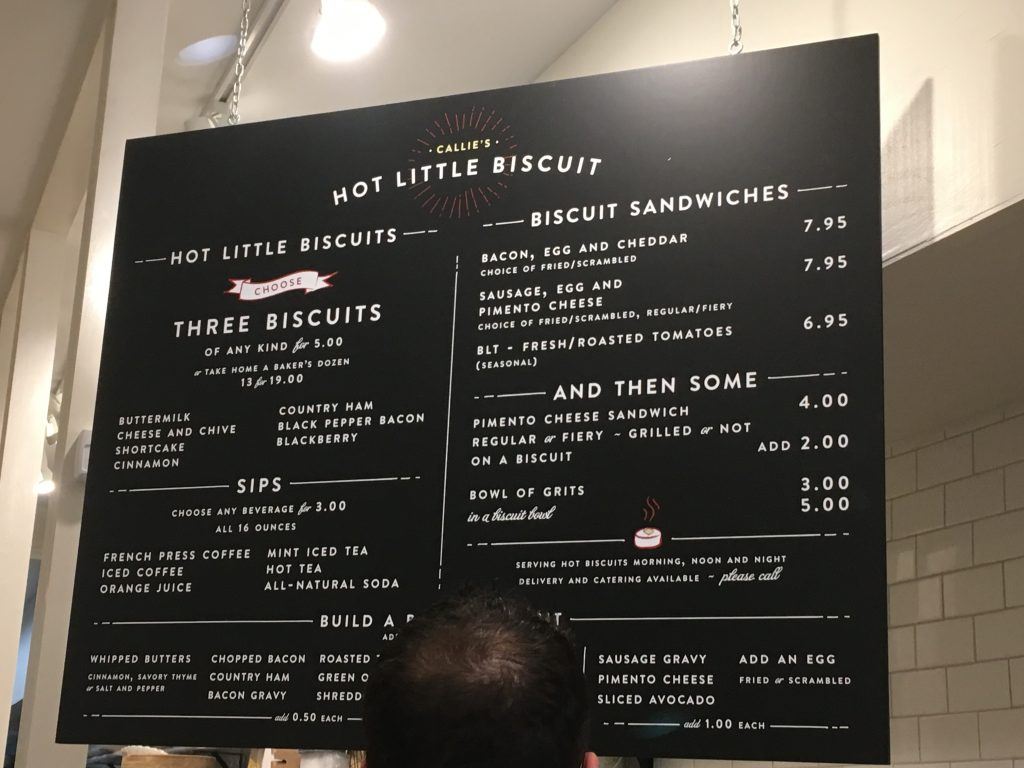 Overstuffed on carbs, I started walking south.  My driver had mentioned a farmer’s market in Marion Square down the street and I got there just as the vendors were setting up.  I love farmer’s markets so I slowly wandered the stalls looking for things to take back.  Had I been driving back home, I would have stocked up on preserves and crafts.  Unfortunately with limited space and restrictions on items I could bring on a flight, I had to pass on many things.  I was drawn to one booth that was selling items made of cork and I bought a journal.  Another stall was selling jewellery made out of sweetgrass and I lingered there for a while as it was so unique.

I spent the day wandering downtown Charleston, literally crisscrossing the city before I stopped at the highly recommended Hominy Grill for a lunch of shrimp and grits.  Oh my goodness was it ever good.  I then hustled back to the other side of downtown for my dessert tour.  You read that right: dessert tour.  It’s only offered on Saturdays so of course I had to go. 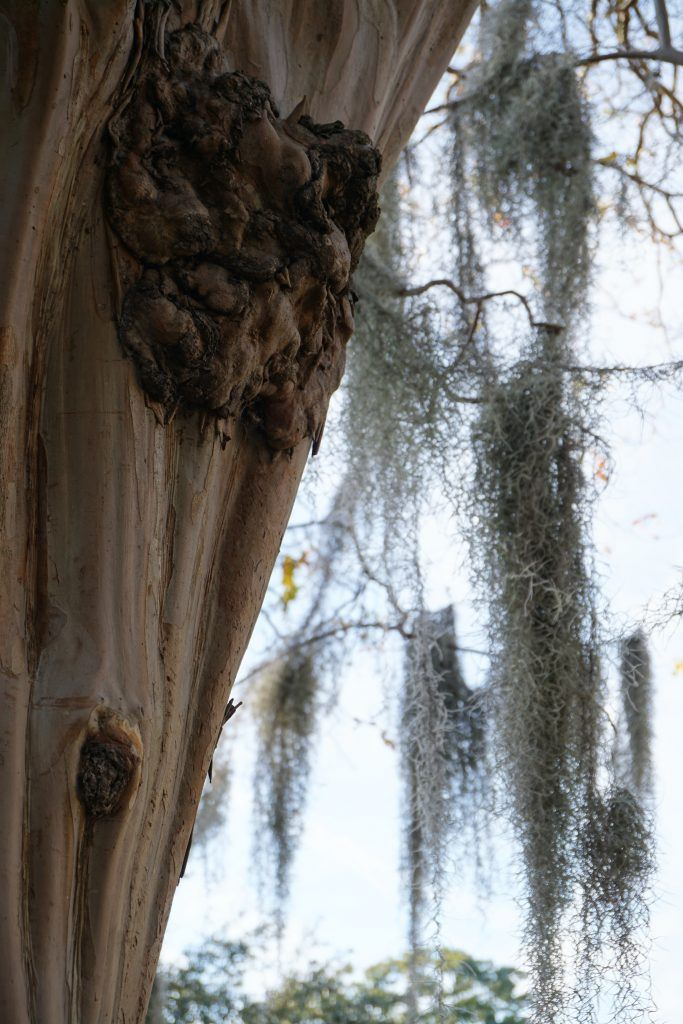 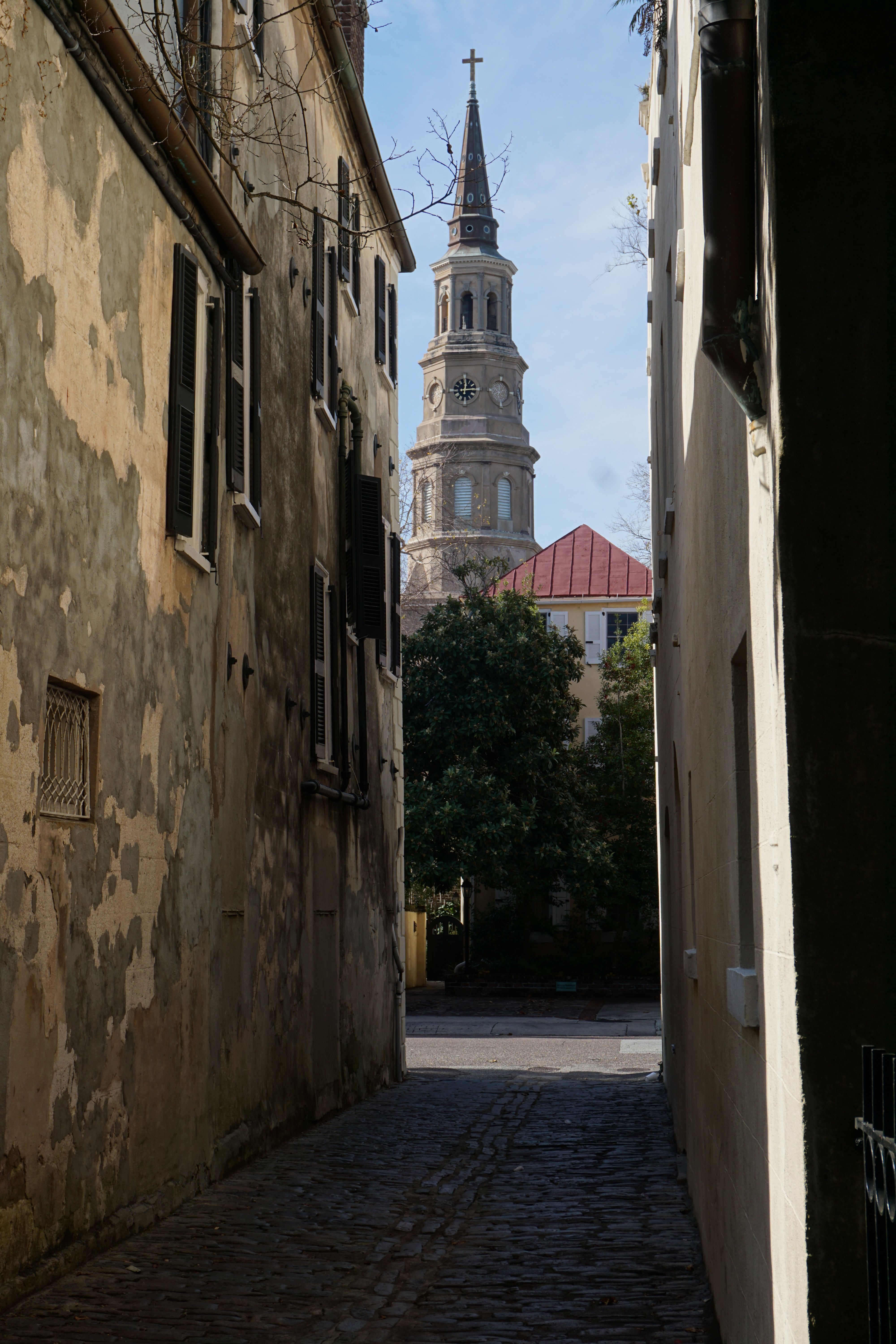 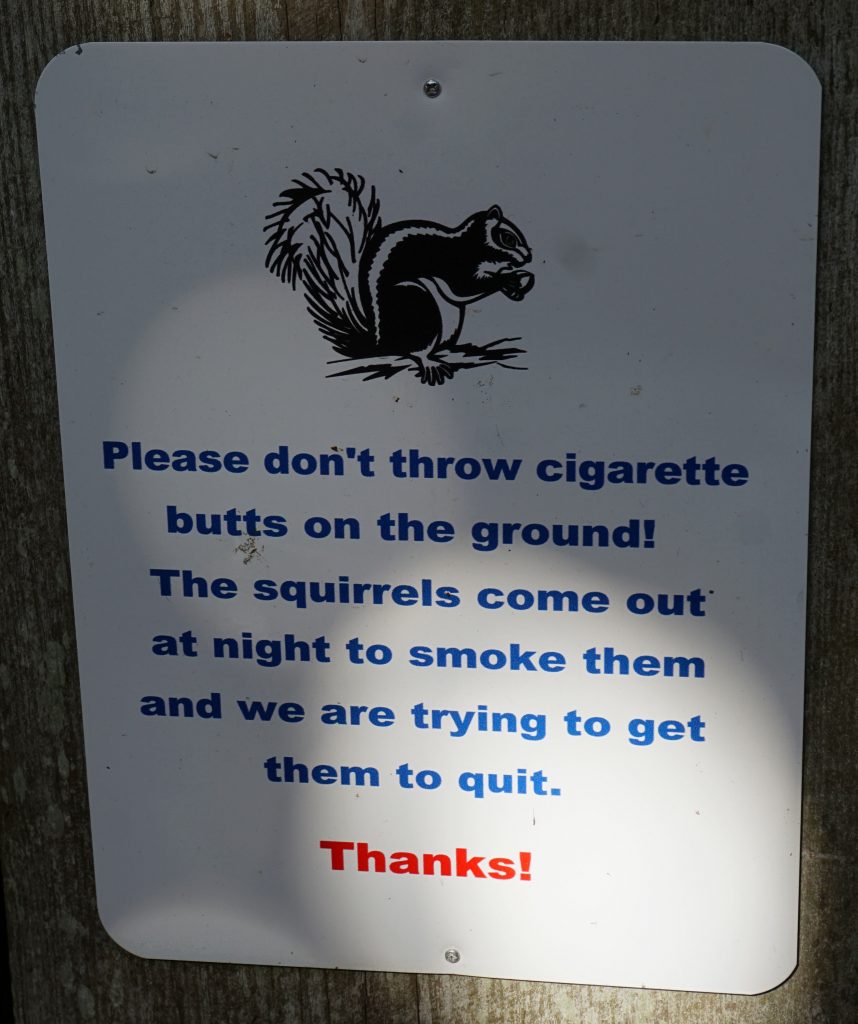 The tour is one of many offered by Bulldog Tours and as I was checking in for the dessert tour, I signed up for the Haunted Jail Tour later that evening.  The weather was so nice and since I was already downtown, it just made sense.  There were four much younger women who were in Charleston for a bachelorette party that were taking the dessert tour with me.  Our guide, Gordon, soon met with us and we were soon walking into Carmella’s where we were served a coconut cake with raspberry filling and cannoli.  Our next stop was Noisy Oyster Seafood Restaurant where slices of chocolate cake, coconut cake, chocolate-pecan pie, key lime pie, and cheesecake were soon placed on the table.  At Market Street Sweets, we had samples of peanut butter fudge, bear claws (which are like turtles), pralines,and candied pecans.  Fortunately they were little pieces although we were given full-sized pralines as we left.  The last stop on the tour was at Peace Pie for ice cream sandwiches.  I stood and puzzled over the selection before I chose a red eye.  Coffee ice cream and chocolate cookie is a never fail choice.

I wandered around downtown until it was time to go to the Old Jail on Magazine Street.  I checked in with the greeter, Jason, and chatted with my soon-to-be fellow tour mates until we were met by our guide, Sean.  There were about a dozen of us on the tour as we made through a surprisingly small building.  It was quite sobering to hear about how prisoners were treated and how many died while in there.  According to Sean, the average life expectancy was two weeks in the jail.

Now let’s get to the burning question: did I see a ghost?  Knowing that the whole purpose of the tour was to see a ghost, I wanted to go in with an open mind.  Jason and Sean somewhat primed the group to see or hear things.  When we first went inside, Sean stopped and gave a little chuckle saying that he heard one of the doors downstairs close.  I hadn’t heard anything.  I did hear voices but they could have been from people walking by outside.  In one room on the second floor, I was listening to Sean and I saw something moving in a corner across from me that looked like a shadow.  There was no reason for a shadow as there was no changing of lights or any other movement that would have caused it.  I wasn’t the only person that saw something as I saw a few other people go and look in the same corner.  After we left that room to go to the third floor, an older gentleman came up to me and quietly said he saw something.  I looked over at his son-in-law who literally had that “seen a ghost” expression.  All I could think to saw was “Really?  Cool.”  Some people said the batteries on their phones were completely drained.  Others said their flashes didn’t work.  It wasn’t until I was looking at photos that I saw a few streaks of light that I can’t explain and one very clear orb that had no reason to be there.  Now they could be reflections off of something but I didn’t see anything that would cause those kinds of lights and if there had been something on the lens, it should have shown up on all of the photos since I didn’t wipe it off in between photos.

I had walked by a distillery after breakfast and decided that it would be fun to go check it out after the jail tour so I walked back up King Street after I wandered around a bit more.  Downton Charleston is very quiet and almost devoid of people at night and I wondered where all the bars were.  I found them.  Ironically, the Charleston bar scene is on King Street, much like Toronto’s.  However when I found the distillery closed, I decided to pass on the bars and went back to my Airbnb. 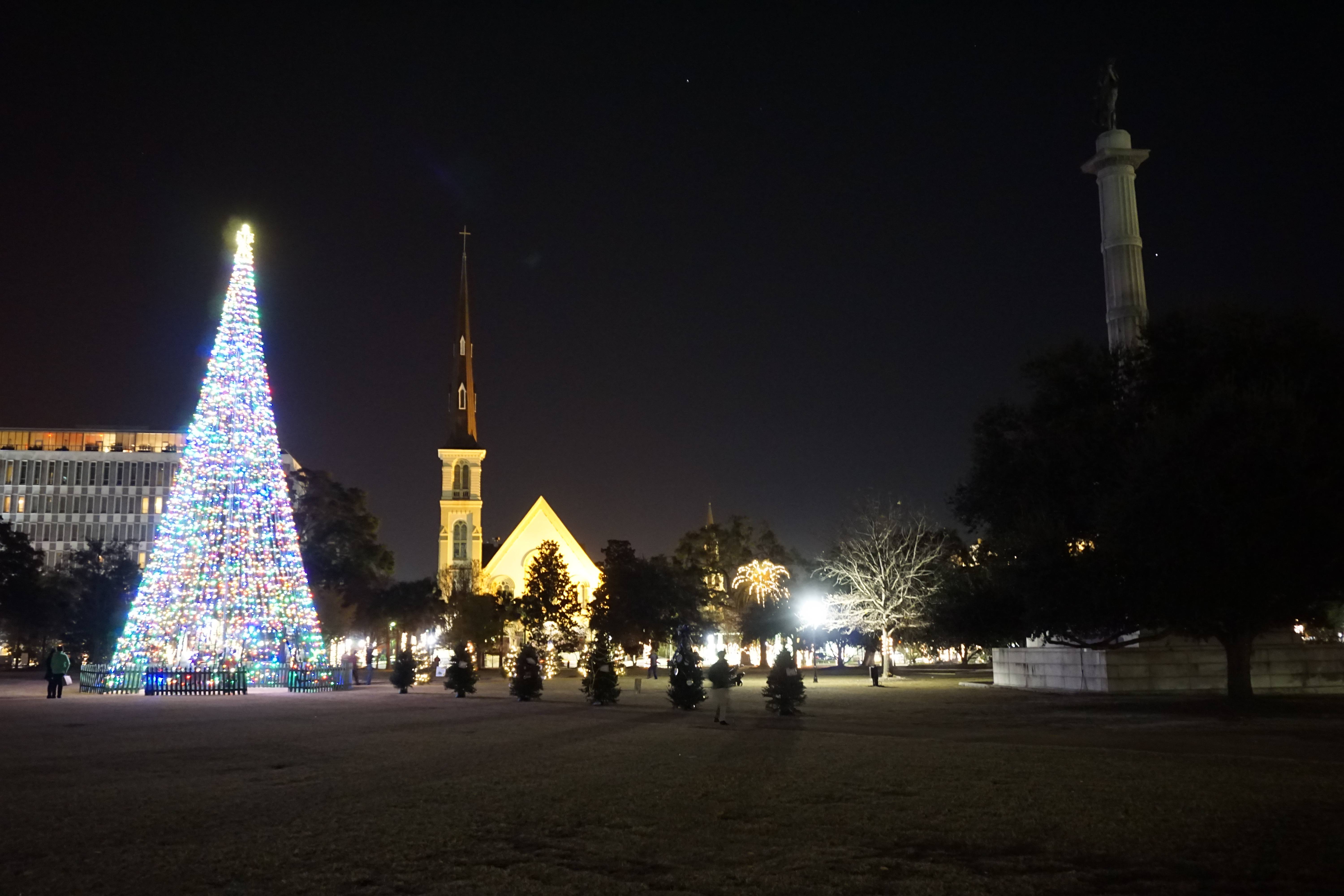 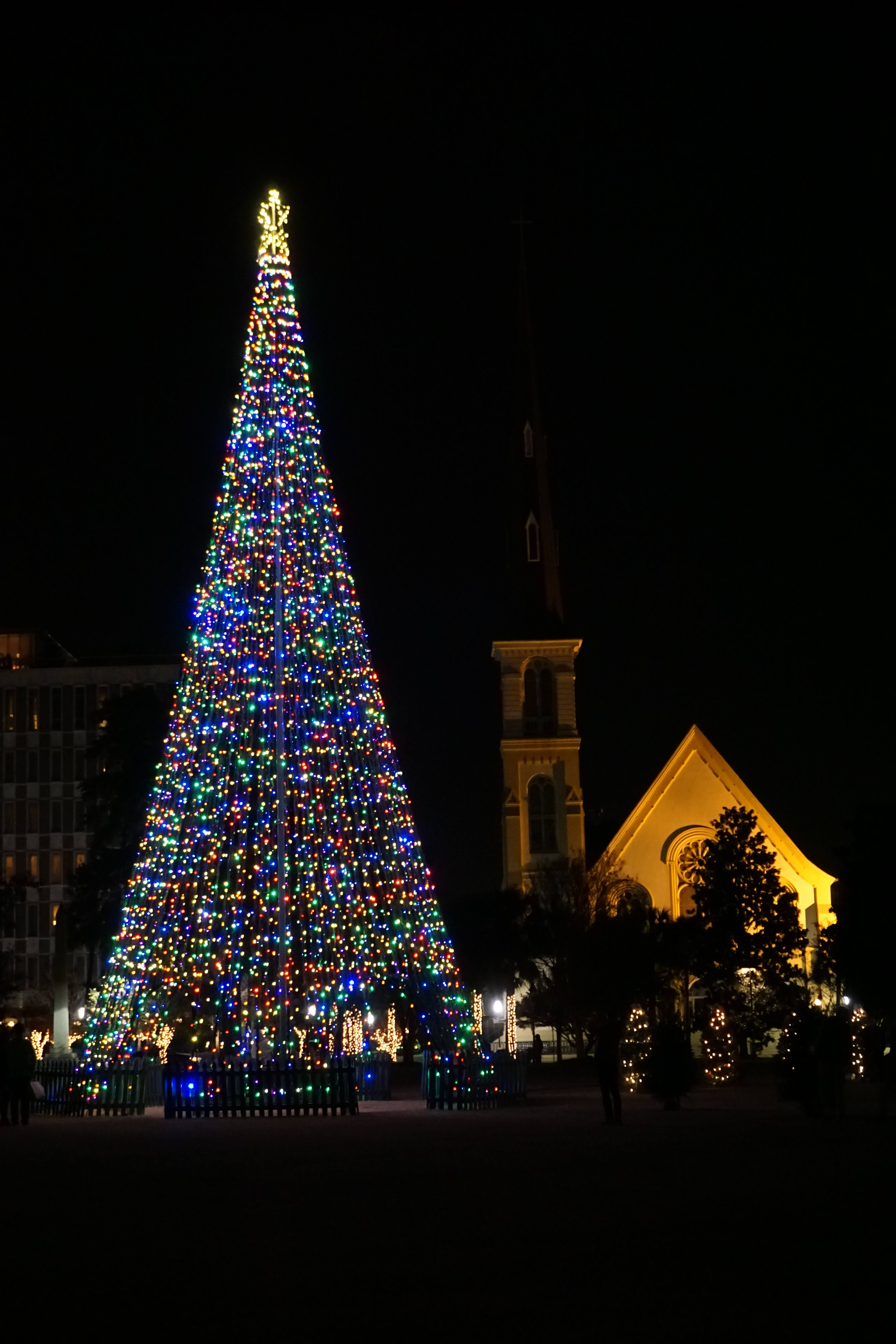 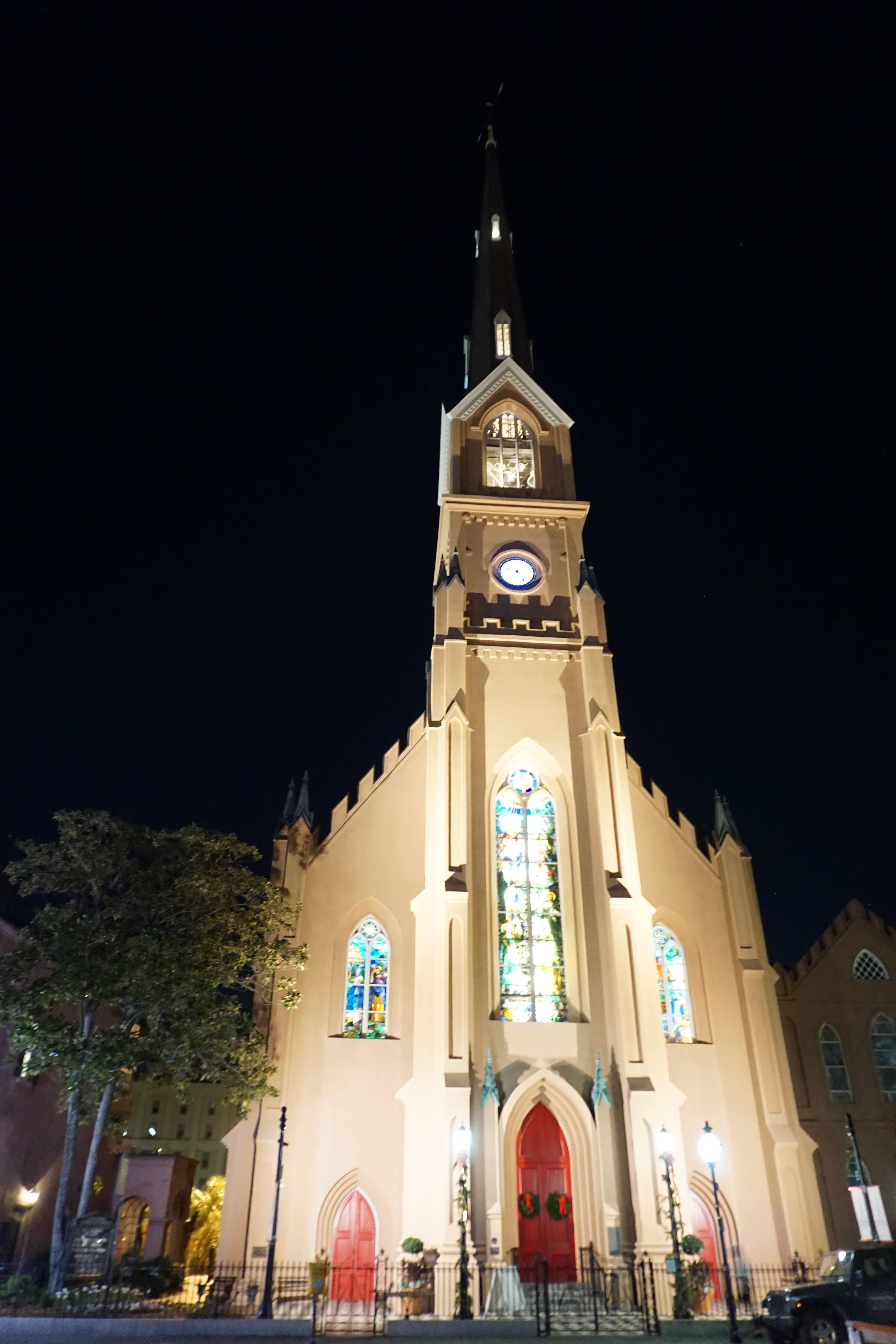 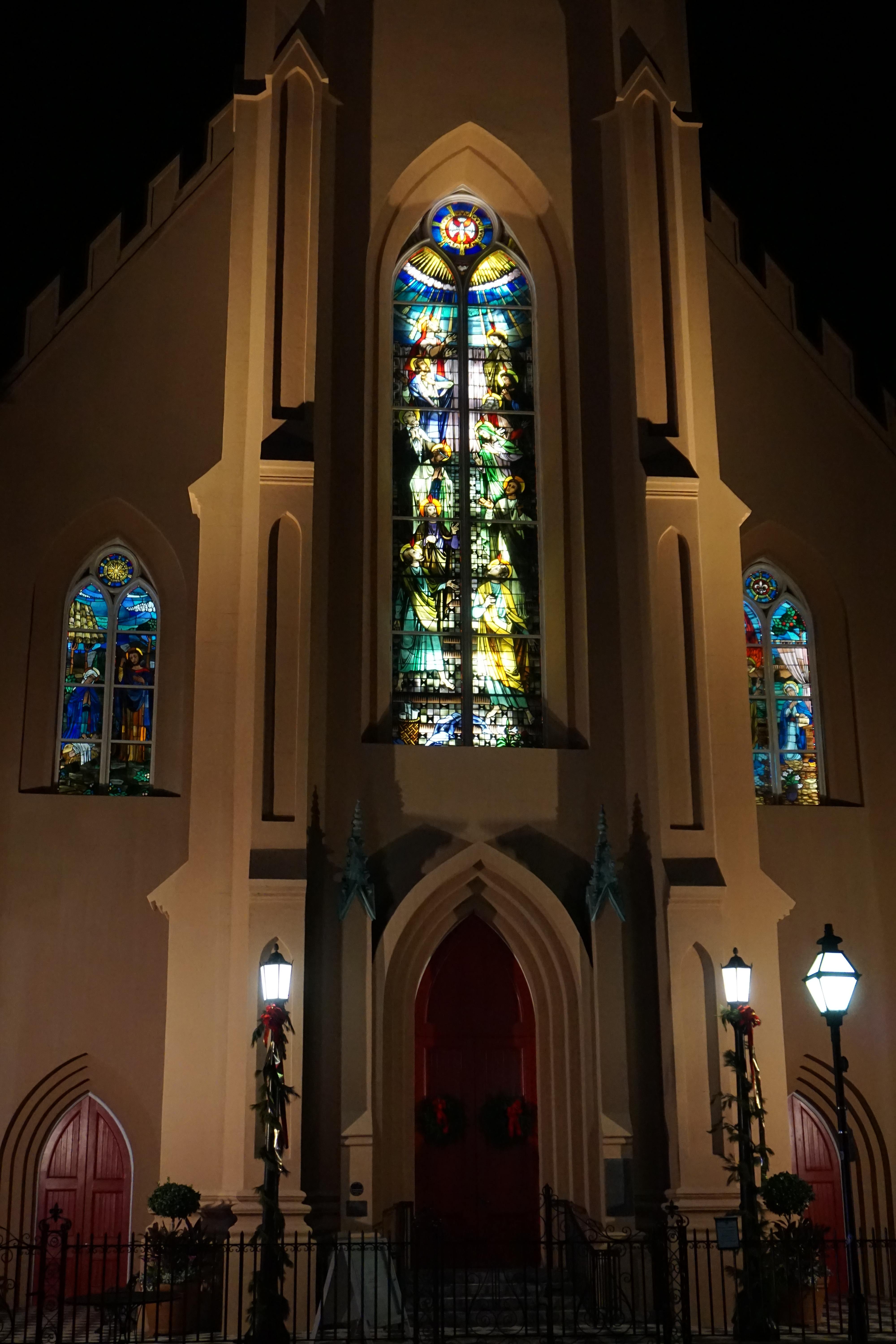 Just a side note: if you feel like you’ve got a lump of sock fluff in your shoe, take the time to clear it out.  When I pulled my boot off, I found a lovely blister under the ball of my left foot that was almost the size of a quarter.

Read about my next day in Charleston by clicking here.