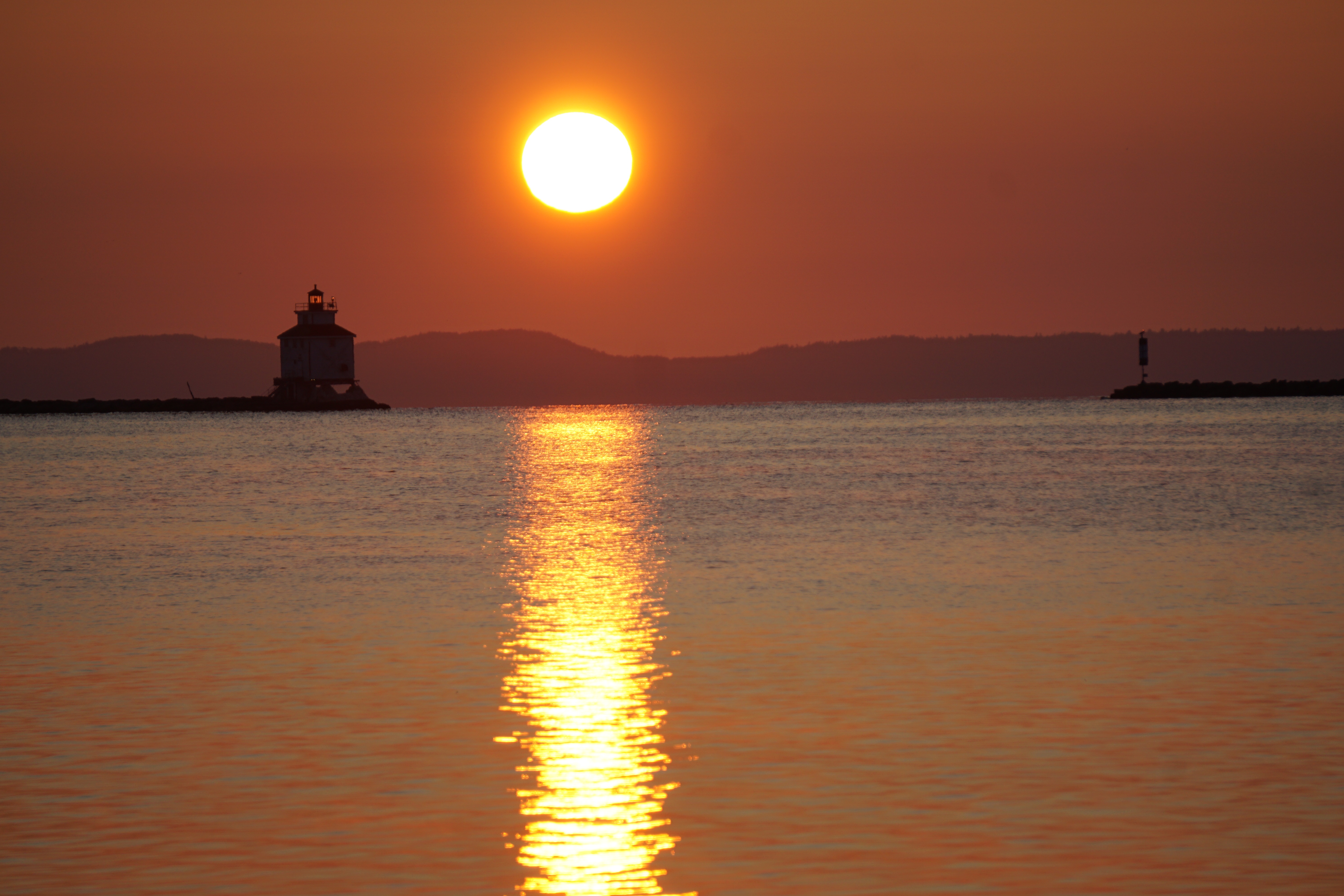 I’m not embarrassed to say that I had planned our wake up time around a breakfast spot.  Thunder Bay has several Finnish restaurants and there were two that I had looked at: Hoito’s is one of those restaurants that has been around forever and Niva’s.  Niva’s had a higher rating on Yelp, but more importantly it was open an hour earlier.  So after a quick walk and the dogs had their breakfast, I loaded up the car and we went for mine.  Oddly enough, the dogs were much more eager to leave than they had been the day before.  I’m sure the condition of the room had nothing to do with that.

Even though we arrived shortly after the 7:00 opening, there were already several people inside.  I was met by a woman that was just way too happy that early in the morning and placed an order for whole wheat Finnish pancakes with a side of bacon.  I had to ask what a Finnish pancake was and it’s basically a crepe.  A short time later, I left with my food and we drove down to the waterfront where I demolished my pancakes and split the bacon with the dogs before we went for a proper walk.

I’m not normally a morning person but the sun coming up over Lake Superior was just incredible and I ended up with one of my favourite pictures I have ever taken.  The dogs were fascinated with the geese that insisted on walking across the sidewalk in front of them.  Jack was determined to get into the lake; maybe to swim, maybe to get the geese.  Soon it was time to continue.  Our first national park of the trip was waiting for us. 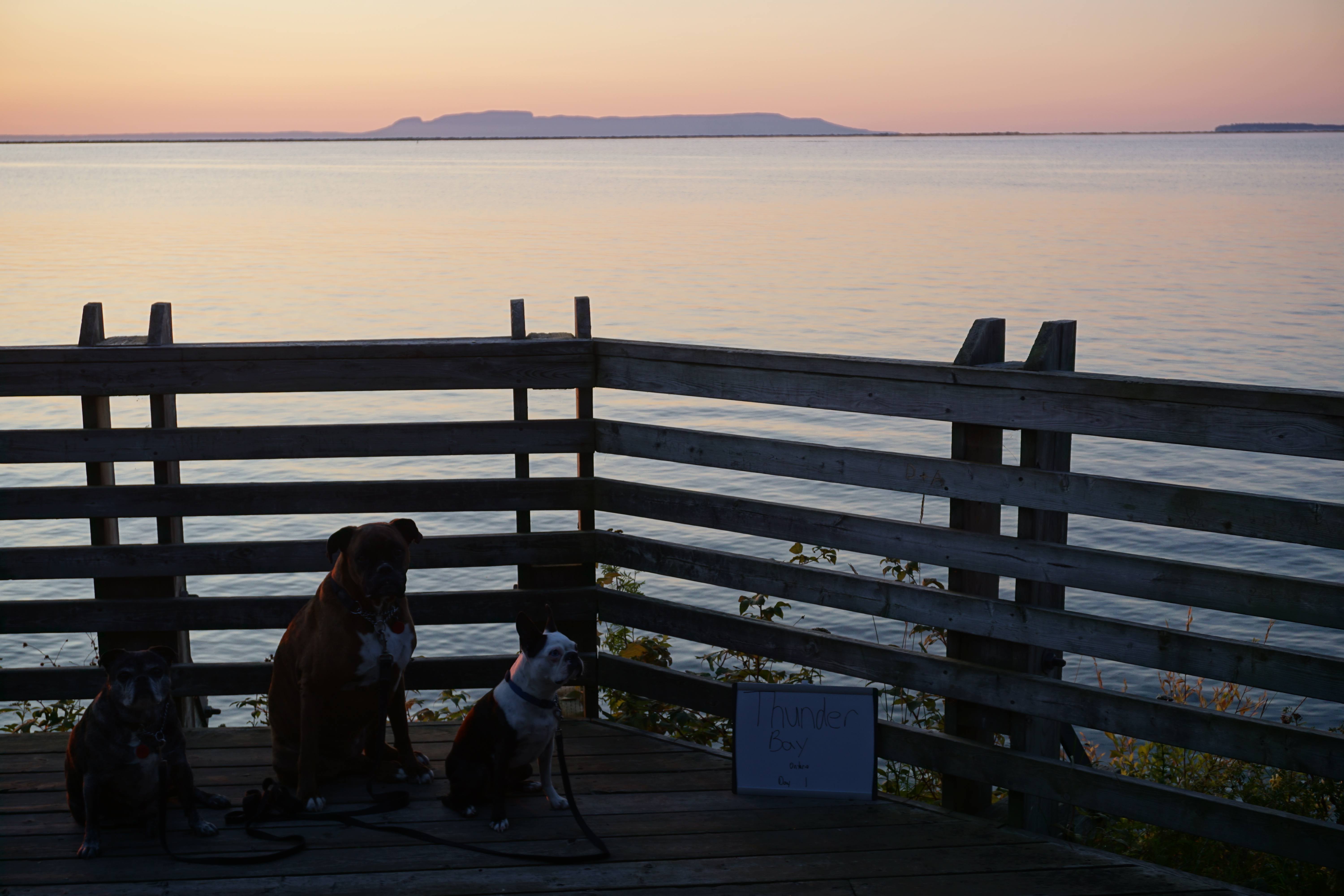 We continued along Highway 17 and as we approached Vermillion Bay, I knew there was a BBQ place that we had driven by the last time we had gone through.  Oh was I ever excited.  I stopped at Comfort Table Bakery to get a coffee, oh and a loaf of dill bread, and then drove to the BBQ place and found it… closed until 2018.  Huh.  Well that was disappointing.  There was a food truck in the adjacent lot with a big sign that read “Sandwiches” so I figured it would have a good selection of sandwiches.  Nope.  Standard food truck offerings with a ham and cheese and a roast beef listed.  When I saw that no one else was getting a sandwich, I took that as a clue and ordered a smokie.  I don’t know why they call it a smokie since it’s just a sausage and there was no smoke flavour at all.    On the plus side, there was a statue of an inukshuk in the parking lot so the dogs got their picture taken with it before we climbed back in the car.

A few hours later and we were in Manitoba.  It felt kind of odd driving by the usual turn to my grandparent’s cottage but I got over that when I stopped at a stand offering a ton of fresh fruit.  The gentleman working there was quick with the free samples and I ended up with a lot of nectarines, cherries, and some pears for good measure.  I actually surprised myself since I didn’t get any of the gelato that was in the case next to the fruit counter.

Traveller’s note: wear a Bigfoot shirt if you want to start conversations.  I have one shirt that I found that has a silhouette of Bigfoot walking hand in hand with an alien in a forest.  I love it and I’m going to make my own with a little twist (insert sly smile here).  Anyway, we ended up talking about Bigfoot for the entire transaction.  Since there is a high likelihood that I will stop by there on the way back, I can have the gelato then.  I brought the dogs out for a stretch and finished off a couple of pears right there in the parking lot.  I so needed fresh food.  Back on the road.

We skirted Winnipeg and were travelling through long stretches of prairie when I saw a sign for a bakery as we entered Gladstone.  Ohhhhh and I was just getting a bit peckish.  With eyes peeled for more signs I was scanning the sides of the road when a sight struck all thoughts of baked goods from my mind.  I pulled over to ponder what I had seen and then made a U-turn.  I was not mistaken: on the side of the road was a waving, top hat-wearing, cufflinked…well I wasn’t quite sure.  It was standing on a pedestal that read “Happy Rock”.  I stood there in the sun, squinting at this thing.  Happy Rock?  Is this a mining town?  Then with an audible groan followed by a face palm, I got it: Happy Rock=Gladstone.  Well played Gladstone, well played.  We got a few pictures with the Happy Rock and continued on.

The dogs were snoring as I navigated the prairie roads.  There was not much traffic and I was enjoying the serenity when a large transport truck, travelling in the opposite direction completely destroyed it.  I don’t think that the driver meant to do us ill, but as his truck passed by my little car, a rock was kicked up and I was startled by the loud BANG.  I had that sudden adrenaline dump and giggled a bit until I looked at my windshield.  A nice big stone chip.  Needless to say the giggles turned to a long string of expletives.

Then we arrived at the first stop of this trip: Riding Mountain National Park.  OK I’ll be the first to admit that when I think of Manitoba, I think of open prairies and flat landscapes.  Well I was pretty surprised when we got to Riding Mountain.  There were hills and trees and OMG there’s a bison pasture?!  I picked a campsite and quickly set up camp so that we could go see the bison.  The staff at the booth said that they were most active around dusk and it was getting close to dusk.  I shuffled the dogs back in the car and headed out.

Now in my haste, I didn’t take the time to really look at the map and when I saw a road that turned in the general direction of where we were going, I took it.  Well it was the wrong road and took us into the town of Wasagaming.  A town? In a national park?  It turns out that back when many of the older parks were formed, they were considered places of recreation with cottages and little towns.  Interesting but that didn’t get us any closer to bison.

Eventually, I found a sign for Lake Audy and happily saw that it was only 2.50 km.  Great.  I drive down the rocky road with loose gravel bobbing along to the music.  Then it dawned on me: I should have been there by now.  Did I miss a turn?  Noooooo there weren’t any.  Wait…was it 2.5 or 25 km?  Face palm #2 of the day.

Finally we emerged from the trees and crossed over the gate into the bison pasture.   It’s not a gate: it’s a grate that the bison won’t cross over.  I wasn’t quite sure what to expect as we drove along the road.  It was getting dark and I was getting excited at every dark thing I saw as we slowly creeped along.  Bison?  Nope shrub.  Bison?  Nope clump of grass.  Bison? Bison…wait…what?  There just to the right side of the road, was a bison.  I had expected to see a large herd but here was one lonely male.  I didn’t notice at the time, but it looked like he had an injury to his side which may be the reason he was alone.  I took a ton of photos and then continued to follow the road.

That was when we found the herd.  Now I’m a farm girl.  I grew up around horses and cows and sheep but when you have wild bison within spitting distance of your car, well let me tell you that is a humbling experience.  I sat there for a very long time and took a lot of photos.  Since the bison were so close, I couldn’t get out of my car so I ended up leaning across the passenger seat and pushing my camera out the window to snap away.

Piper was completely transfixed by the mass moving just outside the window.  Jack was beside himself with excitement and I was actually a little worried that he may try to jump outside.  Not out of any kind of aggression but because he loves to play with cows.  And really what is a bison but a really big cow?  I don’t think Leo understood what all the fuss was about.  One of these days I’m going to introduce him to some livestock but not today. 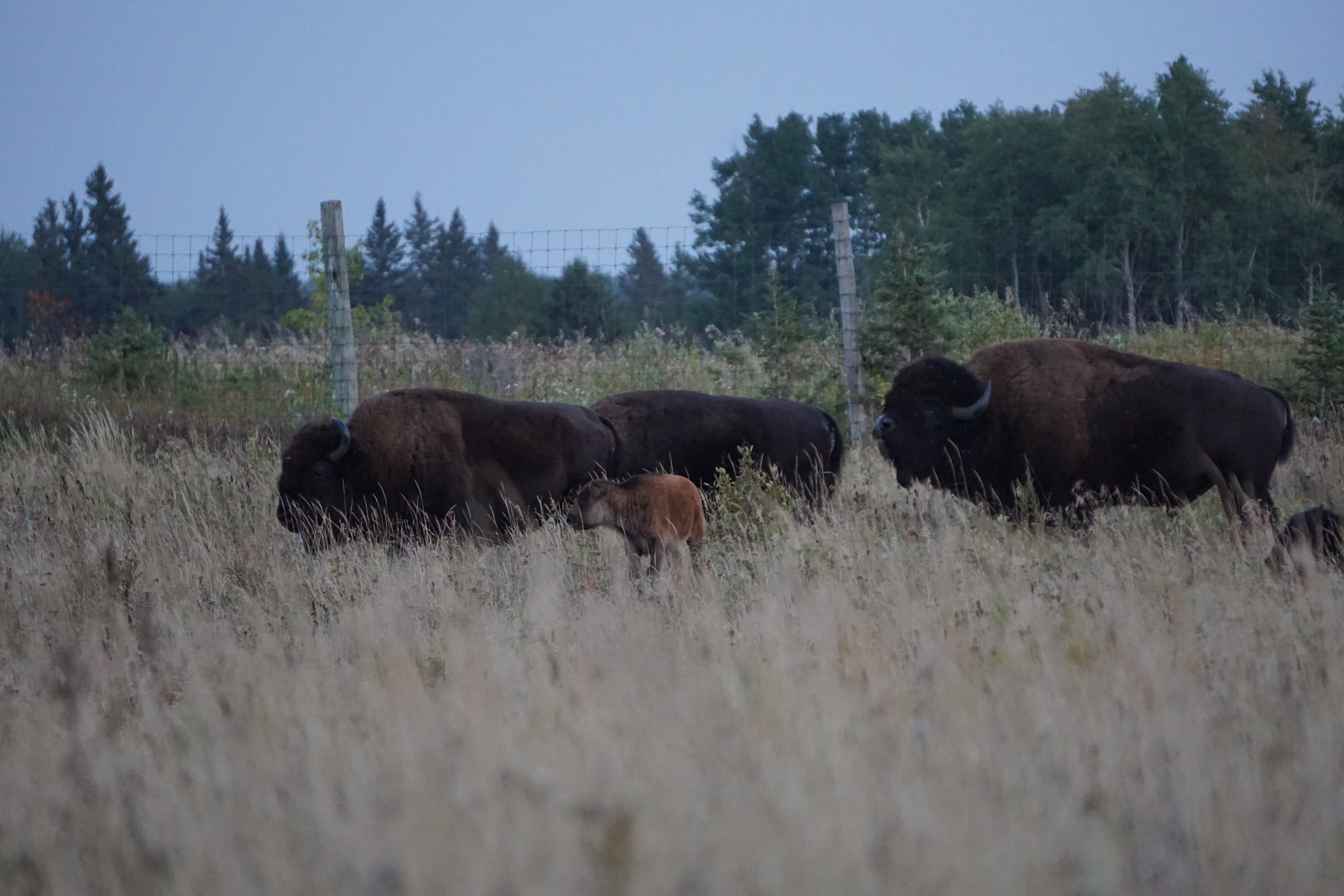 Once the light had completely faded, I drove back to our campsite and made a quick dinner of ramen noodles with dehydrated beef and vegetables before we all crawled into the tent and passed right out.

Highway 10 runs north/south through the park or you can take the much more scenic route through the east gate via Highway 19.  It is about 4.5 hours northwest of Winnipeg or about 30 minutes south of Dauphin.

Hiking is a must.  Bikes are not permitted on most day trails, but there are plenty of other challenging trails.  Boats, canoes, and kayaks can be rented in Wasagaming.  If seeing the park on horseback is more your thing, rides can be arranged at Elkhorn Resort.  There’s even a golf course if you want to get in a few rounds.

The park has several serviced and unserviced sites, backcountry camping, and oTENTiks.

There are a few places to eat in the town of Wasagaming.  I only ate at The Whitehouse but you’ll have to wait for the next instalment for that tale.