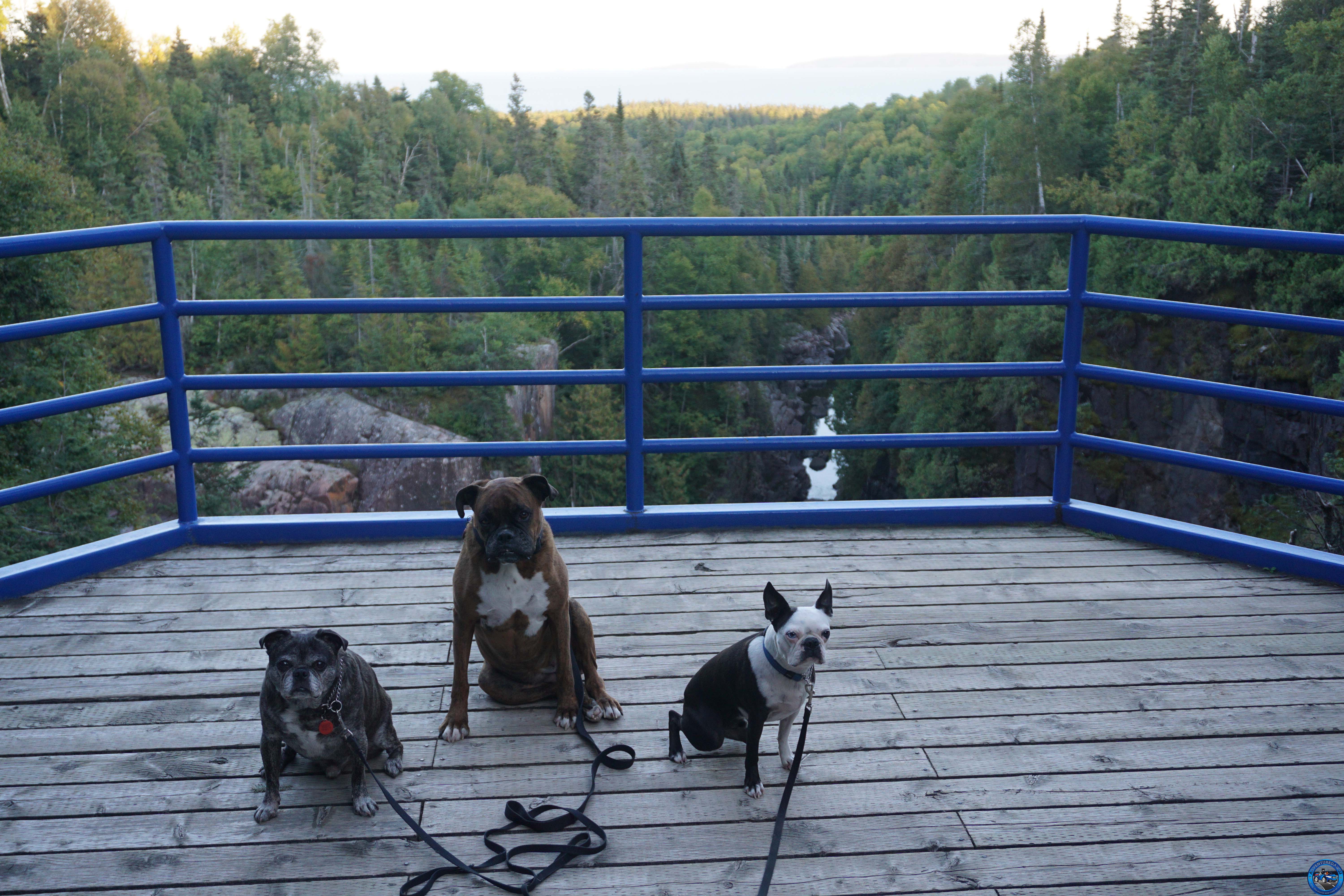 The Standard Road Trip Rules apply with the exception of a higher use of highways.  We have a lot of ground to travel.  The Road Trip bottle is Centennial Limited Edition Rye.

With the car packed the night before, it was a quick start in the morning.  Or at least that was the plan.  Even though we have done this a time or two, there always seems to be something to pack or the dogs are less than enthused to be getting up so early and I end up having to figuratively kick them out of bed.  I think Piper knew what was up because she had been standing at the door the night before as I packed the car with that slightly furrowed brow and head tilt that seems to ask “Can I get in the car now?  How about now?  NOOOOOOOOW???”

There was a light rain as I maneuvered the car out of the driveway.  Now, you would think it would be smooth sailing, seeing as how I have driven this route several times.  Do you know when people are most likely to become lost?  It’s not the first time they travel a path and not the 20th.  It’s roughly the fifth time.  I read that in an article about hiking.  It makes sense because when you’re out the first time you are super aware and strictly follow a map or directions.  When walk the same trail a gazillion times, it becomes second nature.  Once you have a slight degree of familiarity, the mind stops paying such close attention.  So guess why am I mentioning this.  I’m going to blame a lack of sleep and a coffee that hadn’t yet kicked in because for some reason, when I got to one intersection, and my phone said to turn right, I turned left.  I got about 20 minutes down the road before I realized  that none of it looked even remotely familiar and I made a U-turn.  Well that’s just a little embarrassing.

Once the sun started to rise and there was a break in the rain, I went looking for a place for the dogs to get out and stretch their legs.  We were in Parry Sound and I somehow stumbled across a dog park on the side of a river next to a community garden.  I was astounded at how fortunate we were to find such a lovely little place completely by accident.  The dogs ran out and sniffed and peed and sniffed and quickly grew tired of wandering around.  I followed them to the gate and we got back out on the road.

Here’s a quick little geography lesson: the 400 is one of the major highways that leads north from Toronto, turns into Highway 69 and then links to Highway 17.  Highway 17 forms part of the  east/west portion of the Trans-Canada Highway.  It is, by far, hands down one of the nicest highways you can drive in Ontario.  Now I’ve only really ever driven the highway where it meets Highway 69 to the western border of Ontario but I can see a trip along the length of the highway at some point.  It is just that pretty as you’ll soon see.

I like to make the first day the day that I cover the most distance and since we have travelled this stretch before, there aren’t a lot of places to stop except for food and gas and quick pee breaks.  I started to feel a bit hungry and when we got to Espanola, I stopped at Roger Rabbit’s for breakfast.  I ordered the recommended eggs, bacon, hash browns, toast, and another cup of coffee and when I spied a tray of cinnamon rolls, well I had to get one.  In fact, the woman who took my order told me they were usually gone by now.  Well wasn’t I in luck?  Again.  I sat outside with the dogs and shared little pieces of bacon with them.  They kept trying to help with the rest of the meal but since I was the driver, I needed to keep my strength up.  Or at least that’s what I told them.  The roll was for later, you know…fortification and all that.

Lake Superior is the largest freshwater lake in the world.  It is situated in some of the most starkly beautiful land that I have ever had the pleasure of driving.  So when I found a stretch off the highway next to the lake with a wide rock beach, of course I had to let the dogs out to splash in the water. 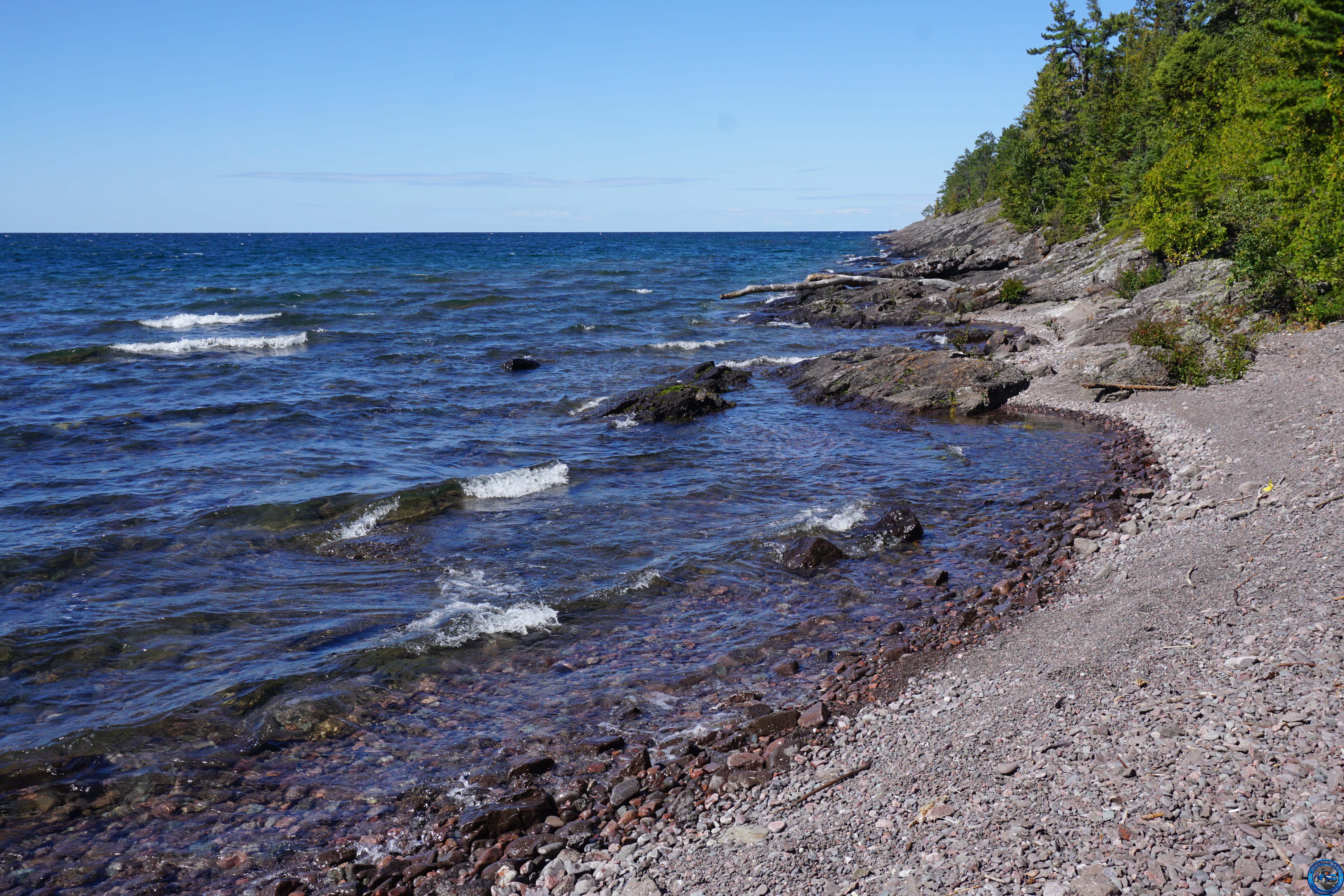 We kept on driving until I needed some dinner and as we were passing by Marathon (yes there’s a town called Marathon in Ontario and yes they do have a marathon), we drove by Mariano’s Restaurant Lounge and decided we needed to stop and investigate.  On the recommendation of the customer who was sitting inside, I got the burger.  She told me she comes in at least once a week to get the burger.  How do you not go along with that?  I ended up ordering the Northern Burger: a homemade beef patty with bacon and cheddar.  With fries.  Now normally I turn down the offer of gravy but I was tantalized when she told me everything was homemade, including the gravy.  OK twist that rubber arm.

Since there was no patio, I took my food to go and sat out on the planter out front to eat.  I was about two bites into a really delicious burger when the cook came out with a small container for the dogs and when she opened it up, I saw that it was full of roast beef!  She asked if she could feed them and with a mouth full of my own beef, I simply nodded.  We talked for a little bit and then she had to run back inside and I turned my attention back to the food in front of me.  The burger was definitely worth frequent visits and the gravy lived up to it’s homemade status with a slightly lumpy texture.  I know some people would turn up their noses but to me, that signals that it was made by a real cook and not some hoity toity chef that really doesn’t belong in a roadside diner.  The dogs may have helped to finish the last little bit of gravy (ahem).  The restaurant has obviously seen better days but this is not the kind of place you go for decor and ambiance.  With bellies full of beefy goodness, we continued onward.

It was starting to get dark when I saw a sign for Aguasabon Falls and Gorge.  I had passed by plenty of times and never stopped.  Well my friends, today that was going to change.  There is a boardwalk that leads from the parking lot to an observation deck.  Most of it is level and gently ramped with only a few stairs to get to the deck itself.  This makes it ideal for people with wheelchairs, strollers, and anyone with mobility issues.  The waterfall is not as close as I would have expected but it’s still a very pretty waterfall and gorge to look at.  It turns out that the water is controlled by the Ontario Power Generation Company (OPG) and the water levels are determined by the flow of water needed for hydro-electric production and the falls are much more spectacular  in the springtime.  Oh well.  After a few pictures, we continued to Thunder Bay.

When I stopped in Thunder Bay back in May, we stayed at the Voyageur Motel.  It’s an older motel but it had served our purposes.  We ended up booking a room there again because almost every room in the city was taken.  I didn’t know the Under 18 Baseball World Cup was being played in Thunder Bay and the only other rooms that were left were a little out of my price range, especially when the pet fee was added.  We ended up getting the last room at the Voyageur.  It was a smoking room but by that point, I really didn’t care.  Besides, some hotels will only put dogs in smoking rooms so I wasn’t too bothered.

It was after 10:00 pm by the time we got to the motel.  That was after 15 hours on the road.  If we hadn’t been in such a bind, I would have turned around as soon as I walked into the room.  The last time we stayed there, we were in the room adjacent to this one.  The decor was a bit dated but it was clean.  Despite the fact that they shared a wall, the two rooms were so far apart as far as quality.  The biggest put-off was the large stain on the carpet (ick carpet) and the burn holes in one of the comforters.  By this point, I was too exhausted to be thinking straight so I just took an extra swig of the Road Trip Bottle and set my alarm for really bloody early.  The dogs piled onto the bed around me and soon we were all snoring away.  Errrr I mean they were; not me.  Nope.