I have a tendency for ambitious trips.  But one trip has been on my mind for quite some time.  Over a decade in fact.  It seemed as though I could never do it, never get the time off, never afford it.  Then finally, I made it happen.  It’s actually a three-part trip: getting there, the trip, and getting home.  I’ll tell you what the actual trip is soon but first it’s time to hit the road!

I had actually packed most of my things a week before we left.  It’s not that I was super excited to go, but I also knew that I would be working long hours to get as much at work taken care of as I could.  And I was super excited to go.  Even though I only had to pack the car, at 5:00 am it still took longer than I thought it should.  Still, we were on the road by 5:45 am.  Standard Road Trip Rules apply and the road trip bottle is Baron Samedi spiced rum.

Everything was going swimmingly and even the bunch up around the city was nothing to worry about.  Not a worry.  No issues.  Then the Buffalo border.  Crap.  OK.  Get the papers out, passport in hand, music down, sunglasses off, both hoping and dreading it would be some cutie of a border guard.  Roll up to the window and…nope.  The streak was finally broken.  I don’t know if they’ve recently changed the question protocol because the questions I was asked are not the ones I am used to.  Weird ones like “Where are you staying?” and “Who are you meeting?” and, this was a kicker “Do you work?”.  Not the usual “What do you do?” but “Do you have a job in Canada?”.  And she didn’t even want to see the dog’s paperwork.  No worries, we were soon across the border and driving south.

It had been raining for days in Canada and the rain continued with us.  It was a blessing in disguise since I would have been more tempted to stop and enjoy some hikes and in the process get us waaaaaaaay behind schedule.  As usual.  But since my little darlings are made of sugar and would melt in the rain, we pushed on through.  Until I saw a sign for Premium Coffee Roasters.  Score.  And they do their own roasting.  Double score.  I popped out and after wandering around the little gift shop, I pour myself a cup and am promptly waved away.  “It’s Friday it’s free.”  I stood like a deer in the headlights.  She repeated herself and walked away from the counter.  A-freaking-mazing.  It wasn’t a great cup but it was a damn fine way to start the trip.

We continued on. For the most part the rain was fairly light but it did get heavy the odd time.  Finally, I saw a sign for Erie State Park and, taking advantage of a break in the rain, we stopped for a short walk.  The wind blowing off the lake and the damp air was the kind of combo that makes the wind blow right through you and soon we were back at the car.   Perfect timing too because it started to pour again. 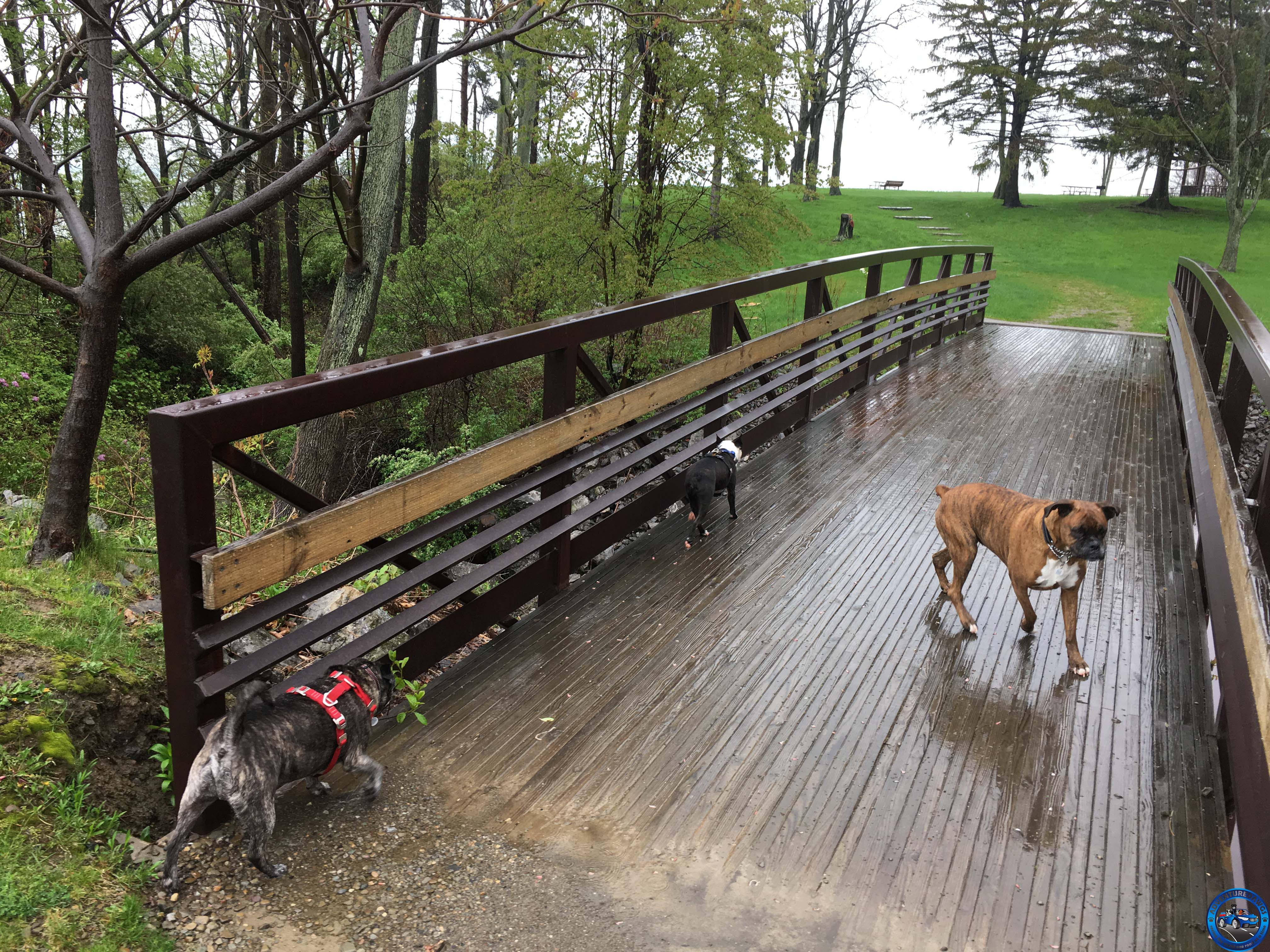 I was getting hungry when we stopped in Meadville, Pennsylvannia.  I saw Al’s Melons Farm Market and hoped to get a sandwich or snack of some kind.  Unfortunately the deli section is in another town but I could get a cup of meat if I wanted.  A what now?  It’s a cup with the end pieces of their cheese and meats.  Well don’t mind if I do.  Oh and some pickles and blue popcorn.  I was soon popping hunks of meat and cheese back as we drove back onto the highway. The dogs may have had little pieces too.  Who are we kidding?  Of course they had samples.

With a tummy full of goodness, soon the sleepies hit and we ducked off in Washington, Pennsylvannia where we found a real treat:  The Shoppes at Quail Acres.  There was something for all of us: Fortuitea where I got a nice cup of americano and a sticky bun and Dogs Rule, a grooming salon AND gourmet dog treat shop where the dogs got to pick from bins of cookies. It was so warm outside and there was a small paddock for them to stretch their legs.  In reality, there wasn’t much leg stretching.  There was some wandering and some sniffing and Leo rolled and that was about it.  OK back in the car.

We were in West Virginia when I saw signs for some hiking trails along the Gauley River and Summerville Dam so naturally we stopped.  I love the sight of misty rivers so we spent quite a bit of time hiking along the bank.  We actually found a pool on the side of the river that almost looked like it had been created.  Seriously, people spend good money for these types of things and here it was au naturel.  The dogs of course had a blast running through the trees and splashing in the river.  I cringed with each splash and the thought of all the wet dog in the car but really how could I be anything but happy to watch them having fun. 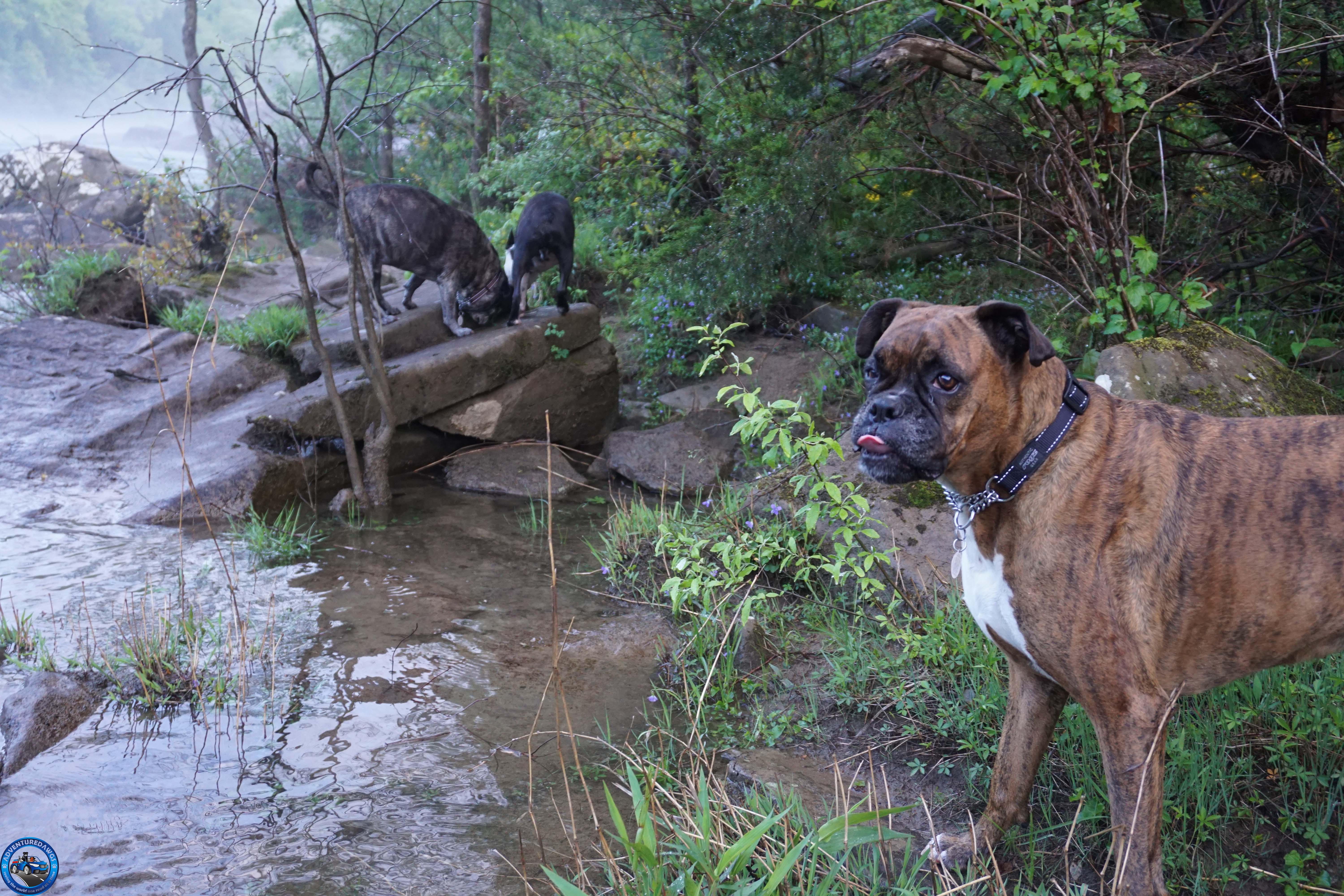 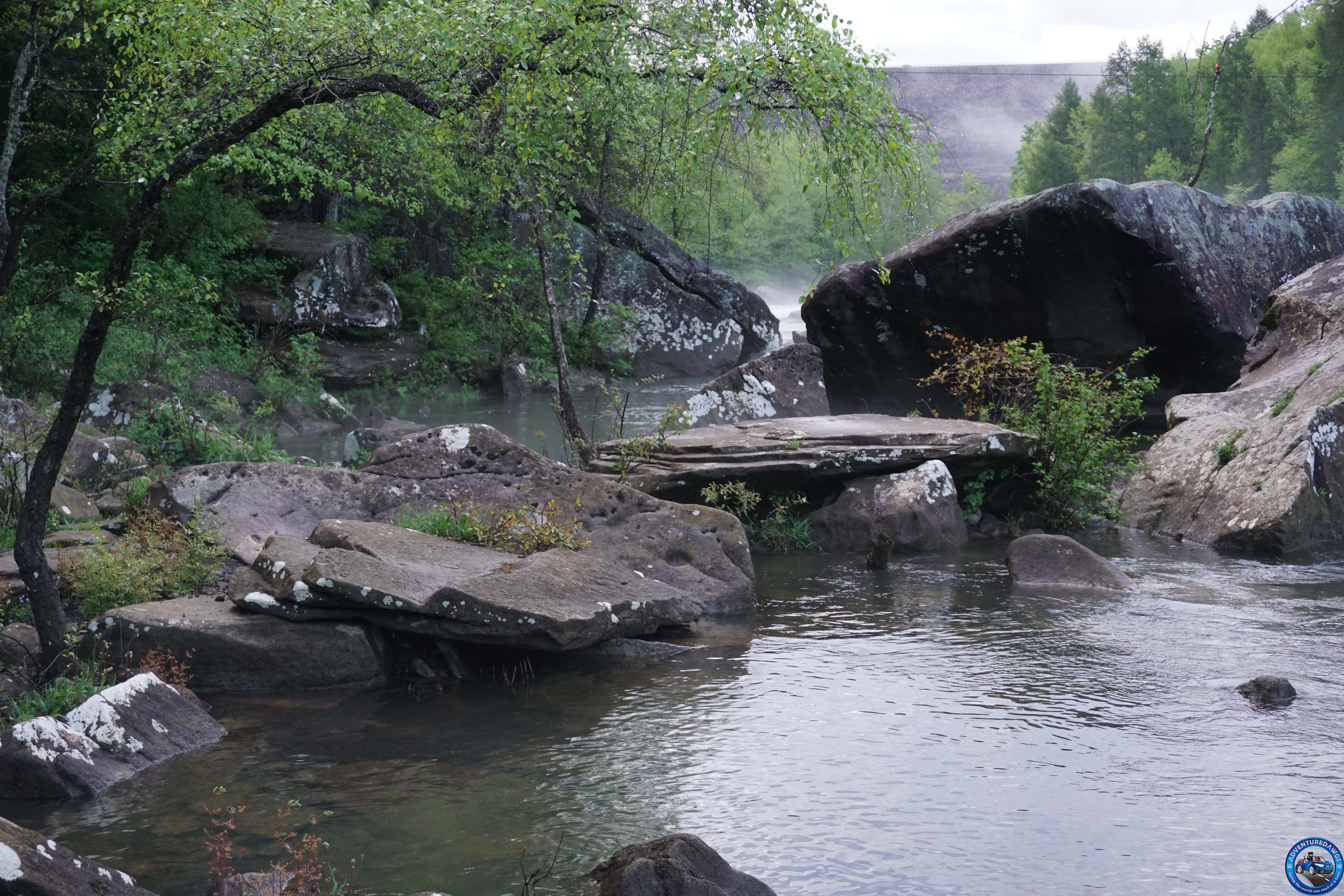 The rain was starting to fall again so we continued on.  We stopped in Beckley, West Virginia for a few reasons.  First, I was getting tired.  Second, I was getting hungry.  And third: MOTHMAN in the morning!!!!!  Wahoo.

We checked into the Days Inn which was the nicest Days Inn I think I have ever stayed at, and headed out in search of food.  My first thought was to go to Campestre for some Mexican food but then I thought “I’ve already had that so I should try something different.”  Well it turned out that everything else was closed except for the chain restaurants so Campestre it was.

I was shocked when I saw how packed the lot was until I remembered it was cinco de mayo.  Nice coincidence.  I stood there and was ignored by several staff members.  I mean, some of them actually turned and looked right at me then turned away.  I thought that holding a menu might help but nope.  I get that you’re busy but at least a “Hang on” or “Be right with you” would have been nice.  Finally one man asked if I wanted anything.  Why yes I did and I ordered the tapatio, which I had enjoyed so much on my last trip.  Now my complete lack of language ability was front and centre because I ordered the ta-patio.  His look said “gringa” as he repeat ta-pa-tee-yo.  It seemed as though the food was done in less time than it took to order it which is good because I was starting to get hangry.

Back in the room and I CRUSHED that meal.  It was as good as I remember: the fresh tortilla chips with ranch dressing and salsa, warm tortillas, steak, chicken, beans, cheese, sauteed onions and mushrooms.  I mean it was demolished in short order as I cracked into the road trip bottle and watched some homesteader show before we dropped into a very deep sleep.