I was up early…well early for me anyway.  It was almost cold compared to the day before and there was the constant threat of rain so the dogs had a really quick pee break outside before I wandered down to the breakfast.  Notes were plastered everywhere that said food couldn’t be taken out of the dining area.  Ugh.  I scanned the offerings and was rather disappointed with the selection.  There wasn’t even a banana or peanut butter for a waffle-wich.  I wasn’t too upset since I had better breakfast plans anyway (insert excited giggling and hopping here).

While I was tempted to stop in Charleston, I decided on a different course and booked a room through Airbnb before we left while I had access to wifi.  It was going to be the first time I stayed at one, though not the first I had ever booked which I will explain later.  I’ve never been a big fan of B & B’s but once I looked at the cost of hotels where I wanted to spend the night, well the choice was a simple one.

The dogs had long since finished their breakfasts by the time I got everything packed up and we were soon back in the car.  But not for long.  I was being pulled towards my destiny.  And in that destiny was a MOTHMAN!!!  If you’re new to this amazing beverage, it’s one of the specialties of The Chocolate Moose in Beckley.  I got HOOKED on them when we passed through earlier this year.  It’s coffee and chocolate and cinnamon and cayenne pepper and whipped cream and O!  M!  G!!!  I’ve been experimenting with making them at home but this…this is just soooooo good.  It must have looked like I was in one of those old coffee commercials once I sat back in the car.  Just picture it: both hands wrapped around the cup, that happy little smile with eyes closed as I took that first tiny little sip.  And the whole wheat berry muffin was really good too.  But really it was just filler.  The mothman was the main star.

We didn’t do too many walks since Piper and Jack were both a little sore from all the hiking the day before.  We stopped at a few rest areas to stretch out before we were back in the car.  That’s not to say that there weren’t plenty of photo ops and of course they met with their legions of adoring fans.  I am always surprised at how many people had boxers or pugs and how many think Leo is a Frenchie (he’s a Boston Terrier by the way).

It was a little after 5:00 pm by the time we rolled into our Airbnb in the Rincon area at the top end of Savannah, Georgia.  I met with one of our hosts, unloaded some of the gear, and drove downtown.

We wandered a bit to kill some time and stopped at Zunzi’s for a sandwich.  They have a massive patio and not only are the dogs allowed on the patio, when I went to the walk-up order bar, they were actually allowed inside just as long as they stayed on my side of the counter.  Wow.  But that’s not all.  They got a container of chicken for themselves and I got some of their rooiboos iced tea on the house.  Wow wow wow.  I ordered the conquistador sandwich which is their roasted chicken on on bun with sauce and lettuce (hold the tomatoes please).  When I took my stack of containers to the patio, I had one woman sit down with me so she could feed the dogs and another gave me a half of her sandwich that she was going to throw out to feed to the dogs.  All the attention was a little overwhelming.  Finally they left and I was able to eat my sandwich.  It was good but the food was far overshadowed by the customer service.

Then we went to Chippewa Square.  We were going to do another ghost tour.  I mean the one in Charleston was so much fun, and Savannah is supposed to be the most haunted city in the United States so we HAD to go on a tour.  I didn’t sign up before we left so I just went to the square as per the website for 9:00 and waited.  And waited.  And waited some more.  I left after some other people that were looking for their tour group but it turned out they were with another tour operator.  On a hunch, I went back to where I had been and saw a bunch more people waiting so I guess what was on the site was off by a bit.  I also noticed they were carrying cups.  Hmmmmm I didn’t know this before but Savannah lets you carry drinks in plastic containers.  That may have had something to do with all the drunken shenanigans I heard going on.  There’s nothing quite like that alcohol-fuelled squeal echoing off building walls.  There were also these bizarre contraptions that were being driven around.  The only way to describe them is as a covered bar with people seated around it and they pedal it.  It’s like those long tandem bikes but around a table with a cover.  And even those drunkards would yell “puppies” when they saw the dogs.  Ugh.

Unlike most cities I have been to, Savannah has squares all over the place.  It seems like there’s a different square complete with statues or monuments every few blocks.  They are pretty but if you’re used to only having to navigate by one or two, it can throw you off.   It has a very different feel from Charleston; a grittier, partier version.

The tour guides from Blue Orb Tours showed up and had no problems with letting me tag along.  Because it was such a large group, their were two guides and I went with Adam.  First, he was a great guide and had lots of interesting stories and was a very good speaker.  His style was dramatic but also with a good bit of sarcastic humour.  At some stops, he would show a tablet with photos or video or audio.  Whether you believe or think it’s just the power of suggestion, I would definitely recommend taking the tour, if only for the juicy stories from the past.

On one stop at a square, Adam told us how they used to talk in front of a staircase to the house across the street but there were times when women, always women, described getting “groped” and said they would wait if anyone wanted check it out.  There were nervous looks around the group and a lot of feet shuffling.  Aw heck so I took up the leashes and we walked across the street where we were joined by almost every woman in the group.  We waited but no one got groped.  Or no one admitted to getting groped any way.

The dogs were amazing for the entire tour.  At every stop, they would flop down and wait patiently until we headed out.  They had so many compliments about how well-behaved they were I could not have been prouder.  They still got lots of attention on the tour and I think some people that were really uneasy would sit by them to either ground themselves or to be distracted.

Did we see anything?  Not really.  There were a few places where I had bit of tightening in my chest but I just chalk that up to the stories that say there’s something going on.  The last stop on the tour was at the Sorrel Weed House which is supposed to be the most active house in the United States.  One window on the second floor was open and a ceiling fan inside was turning very slowly.  Then it would stop and turn again.  I was taking photos and noticed that sometimes the fan was spinning very quickly.  The logical part of my brain said that since the window was open, the fan was spinning because of warm air rising from the hot concrete.  The not so logical part of my brain…well that was coming up with all kinds of other stories.  The dogs hardly reacted to anything so they are either really lousy ghost hunters or nothing was there to hunt. 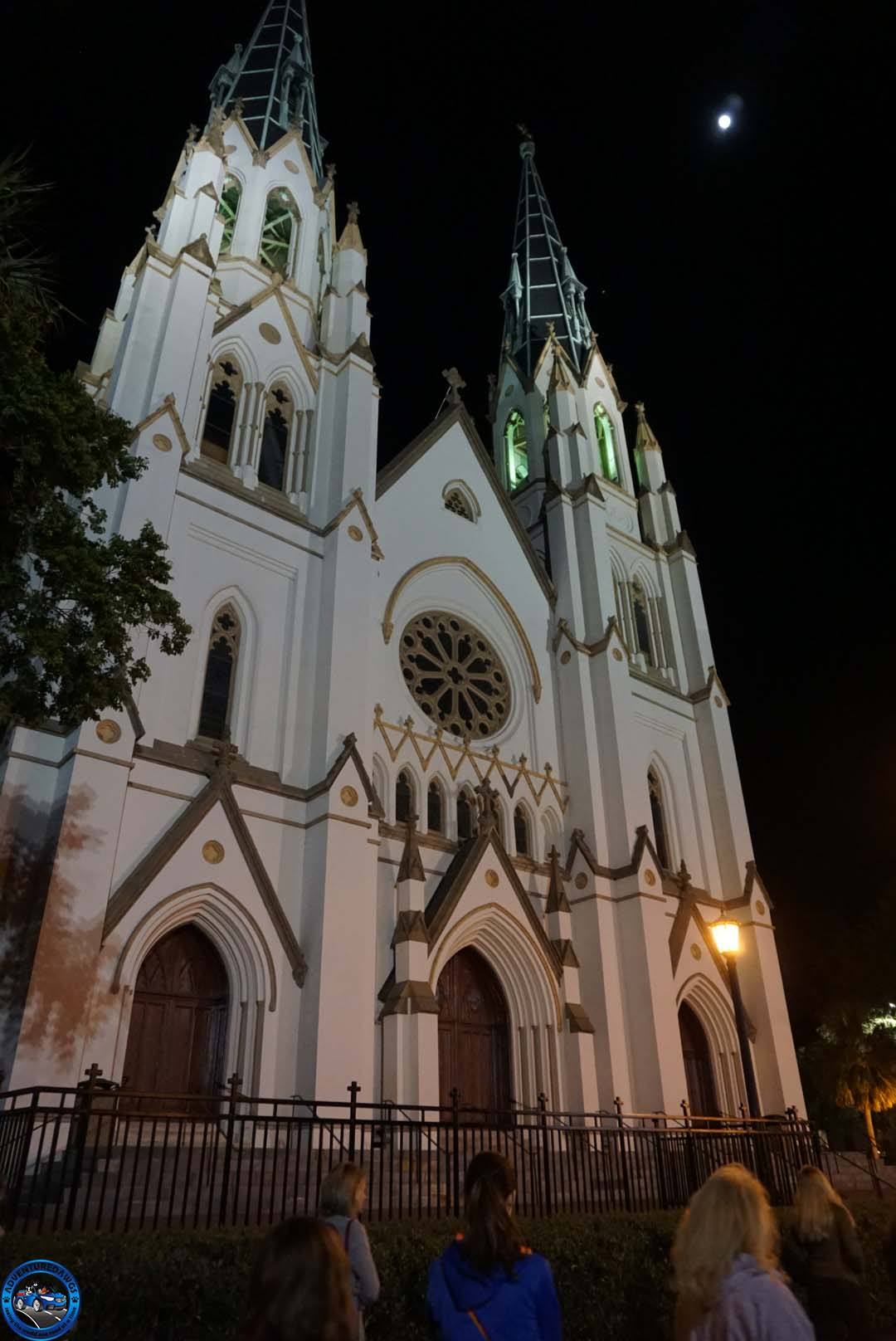 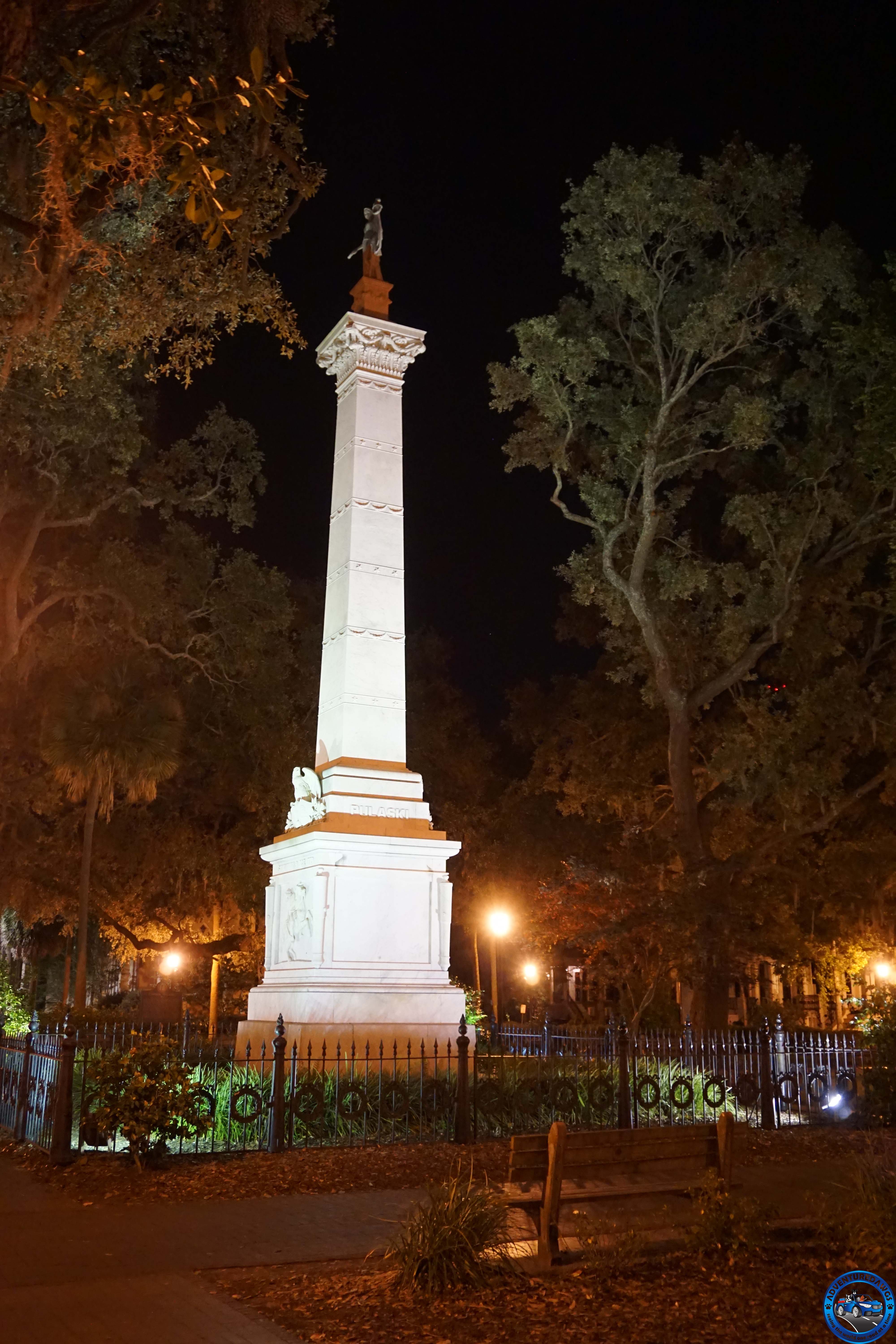 After such a busy day, it was all we could do to get to our place for the night.  I was so tired I just fell into bed and passed right out.

2 response to "Coffee and ghosts"