North Into the Dark 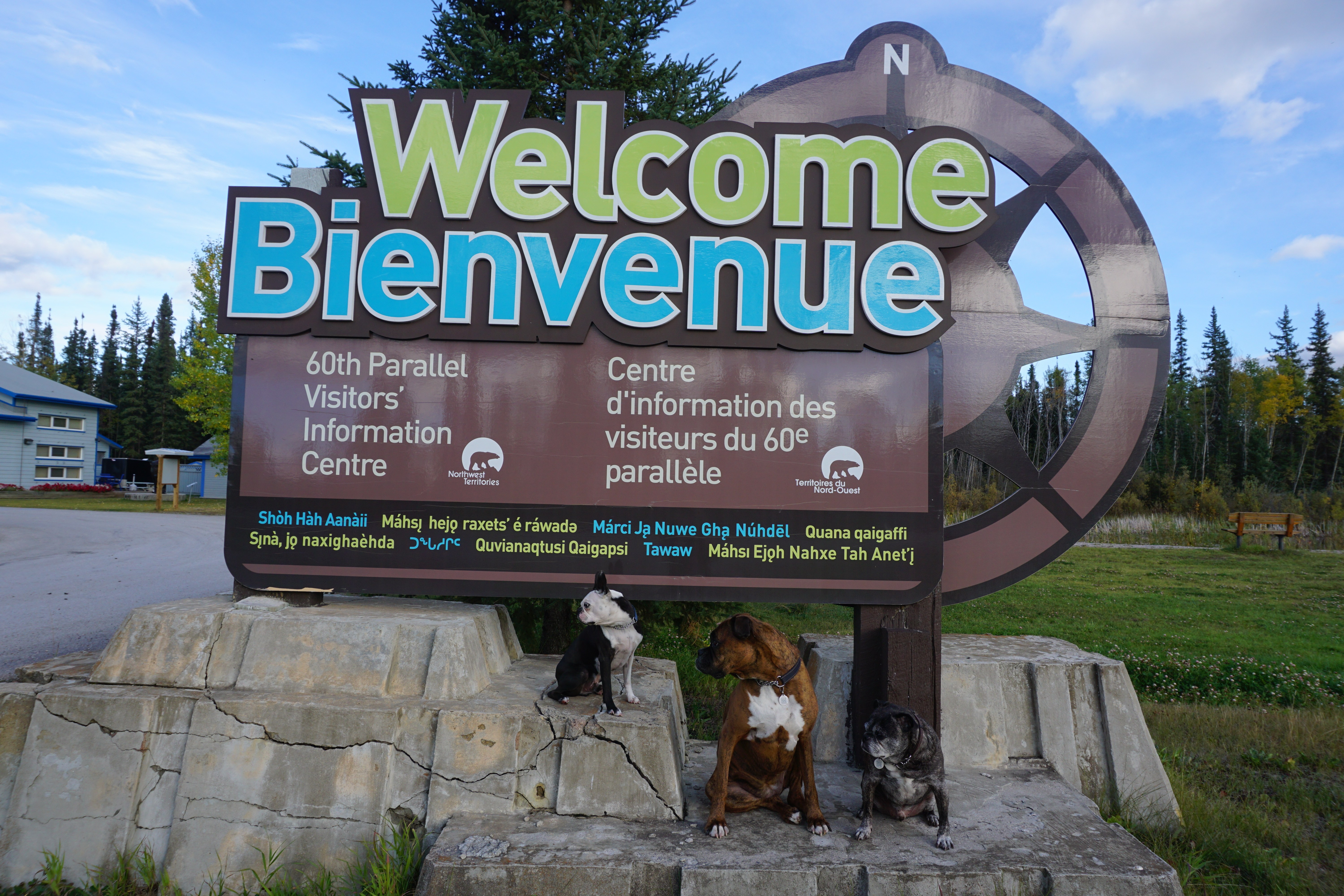 The alarm woke me before the sun was up.  Needless to say, the dogs were not too impressed with being shoved out of their blankets so early and they kept trying to sneak back inside as I packed up.  I would back out of the tent with a load of things and when I turned back to the tent, I’d see Leo curled up on a blanket inside.  Piper kept huffing at me to let me know that her highness was not happy as she sat on their camping blanket even though I had wrapped her in blankets so that she was still warm.  Jack…well Jack just watched.

The sun was just poking up over the trees when we left our site.  We stopped for a walk that happened to pass by the cafe to see if it was open.  Not surprisingly it wasn’t but we still had a nice walk along the side of Astotin Lake before we turned around and headed back to the car.  Once I had the dogs loaded in the car, I began the drive north through the park.  I didn’t get far as I was brought to a halt by a bison walking along the side of the road.  Fortunately, the behemoth climbed onto the shoulder as I approached then returned to the shoulder as I drove past it.  Piper had her face squished up against the window as she stared at the bison that slowly moved past us.  Jack had his front feet on the centre console as soon as I stopped and then went to make these really funny half growl/half bark noises next to Piper.  I have no idea what Leo was doing.  Probably wondering what the commotion was all about and why I haven’t let him out to roll.

We were passing through Westlock, Alberta when the rumbling in my stomach could not be ignored any longer.  Luckily we found Fifth Meridian Coffee Company.  The sign out front read “Coffee Latte Cappuccino Breakfast Sweets Tea Sandwich Salad Soup” so I was excited to sample to offerings.  I walked inside and with every turn, I felt more and more sad that I lived so far away.  Not only do they make all the deliciousness on the sign but they also make their own preserves and artwork.  If I ever opened up a cafe, it would be like this minus the art since I can’t draw worth a crap.  I left with an americano (excellent), a breakfast wrap of egg, bacon, and cheese, and a peanut butter cheesecake for later.  I grabbed the dogs from the car and clipped their leashes onto my belt so we could walk while I double-fisted breakfast.  That breakfast wrap was one of the finest breakfast wraps I have ever had and I kept telling the dogs how amazing it was.  In fact, it was so amazing that they didn’t get any.  OK who am I kidding?  They got teeny tiny bits of bacon.  The four ingredients balanced each other perfectly but I think the bacon was the real star.  Once I had finished my wrap, I brought the dogs back to the car and offered them some more of their breakfast, which they refused, and we climbed back into the car to continue north.

For some reason, I had expected the terrain to become more rocky the farther north we went.  It didn’t.  What I did not expect was how sparse the population became.  I didn’t really notice it until I happened to look down at my gas gauge then at then next sign for a town and do the hurried math in my head.  Oh no oh no oh no.  Will I have to turn around and go back?  I waffled with that thought then figured I would have enough gas to make it to the next pump.  Just.

Sure enough, we made it to a gas station before the gas light came on.  Whew.  After filling the tank, I took the dogs to an empty lot next to the station and let them out to sniff while I ate my cheesecake.  It had warmed up a little in the car which made it soft and creamy.  Oh how I wished I lived closer.  Of course Leo took the opportunity to roll.  I love this sign that was posted on pumps.  Awesome.

Now I have a bit of a bone to pick with you Alberta.  Now that I think about it, you too Saskatchewan.  First as I was driving along a road in Saskatchewan, I see signs that I am approaching a construction zone.  The speed limit was 80 km/hr then with no warning it dropped to 50 km/hr.  Oh and speed fines are tripled in construction zones.  AND camera enforced.  Well that’s just great (slow clap).  Fast forward to northern Alberta and there are more construction signs ahead.  OK so I slow down (they at least give warning that the limit is dropping) and drive keeping my eyes peeled for construction workers.  None are seen.  I drive and drive and oh there you are and there you go.  Yet I am still in a construction zone.  Oh wait there’s a few more and then nothing.  So my question Alberta: why do you have a 30 km construction zone when there are only two small sections that are actually being worked?  Could you have not just marked the start and end of the little sections and moved as the crews moved?  Needless to say, my venting about the construction to the dogs fell on deaf ears and I was soon all vented out.

Rather than getting rockier or hillier, it actually seemed to getting flatter.  Then I saw a sign for a visitor centre and I pulled over for a stretch and some photos.  I mean how could we not stop at the border to the Northwest Territories?  I have never been so far north and I was so excited to document this milestone.

We continued on into the Northwest Territories and I noticed that we saw very little traffic on the road.  We didn’t even see driveways or houses.  We did however see plenty of signs that advised that bison may be on the road.  We didn’t see any bison, but I did see a black bear at the edge of the tree line.  A little farther down the road and I saw something grey emerge from the trees.  At first I thought it was a wolf but when I drove by I noticed that it was in fact a lynx.  By the time my brain registered what I had seen, the shadow had melted back into the forest.

The sun sinking low in the sky made for some spectacular sunsets and I stopped a few times for photos.  I saw a rainbow way off in the distance but couldn’t see any signs of rain.  Apparently the end of the rainbow was north and west of us.

I hadn’t noticed how quickly it got dark until I was racing to get off the road to avoid a bison as we drove through the dark.  Since the forecast had been calling for rain and falling temps, I had booked an Airbnb in Fort Smith.  In order to get to Fort Smith, we had to drive through our next park stop: Wood Buffalo National Park.

I didn’t have much of a chance to look at the park since it was dark by the time we got there.  It took even longer to get to Fort Smith since there was a massive length of road that had been ripped up for construction.  So there we are, in the dark, crawling across loose gravel, and watching for bison.

Finally, we arrived in Fort Smith and my phone directed me to the address for our Airbnb to find…an open lot.  Well that was a bit confusing.  I liked at the phone, at the street sign, at the dot on the map and it all seemed to be right.  Considering we had been on the road for well over 12 hours it took me a little while to process everything.  We were on the right street so I drove down looking for the number and was unable to find it.  Great.  Now the Airbnb was run by Whispering Pines so when I saw a sign across the road for Whispering Pines, I went and knocked on the door when my messages and voice mails went unanswered.  There were no lights anywhere and as I stood at the door, I heard something in the dark give a little growl.  Well that was my cue to leave.

At the opposite end of the road from where our accommodations were supposed to be, I found the local detachment of the Royal Canadian Mounted Police so I sauntered inside and explained my dilemma.  They had no idea who I was talking about but they also seemed a little surprised to see someone from so far away knocking at their door not long before midnight.  I was so exhausted I just asked if I would be able to put my head back in the parking lot for a few hours, and they said that would be alright.

I let the dogs out of the car to walk around and offered them more food, which they turned their noses up at before waiting at the car door.  We all curled up on and under blankets, Leo tucked up next to me in the driver’s seat, Jack in the passenger seat, and Piper sprawled across the back with her nose tucked into the side of my neck.  Needless to say, sleep was a little long in coming and I kept hearing yelling from somewhere not too far away.  I just pulled my hood farther up over my head and trusted in the safety of the parking lot.  And my built in alarm system.