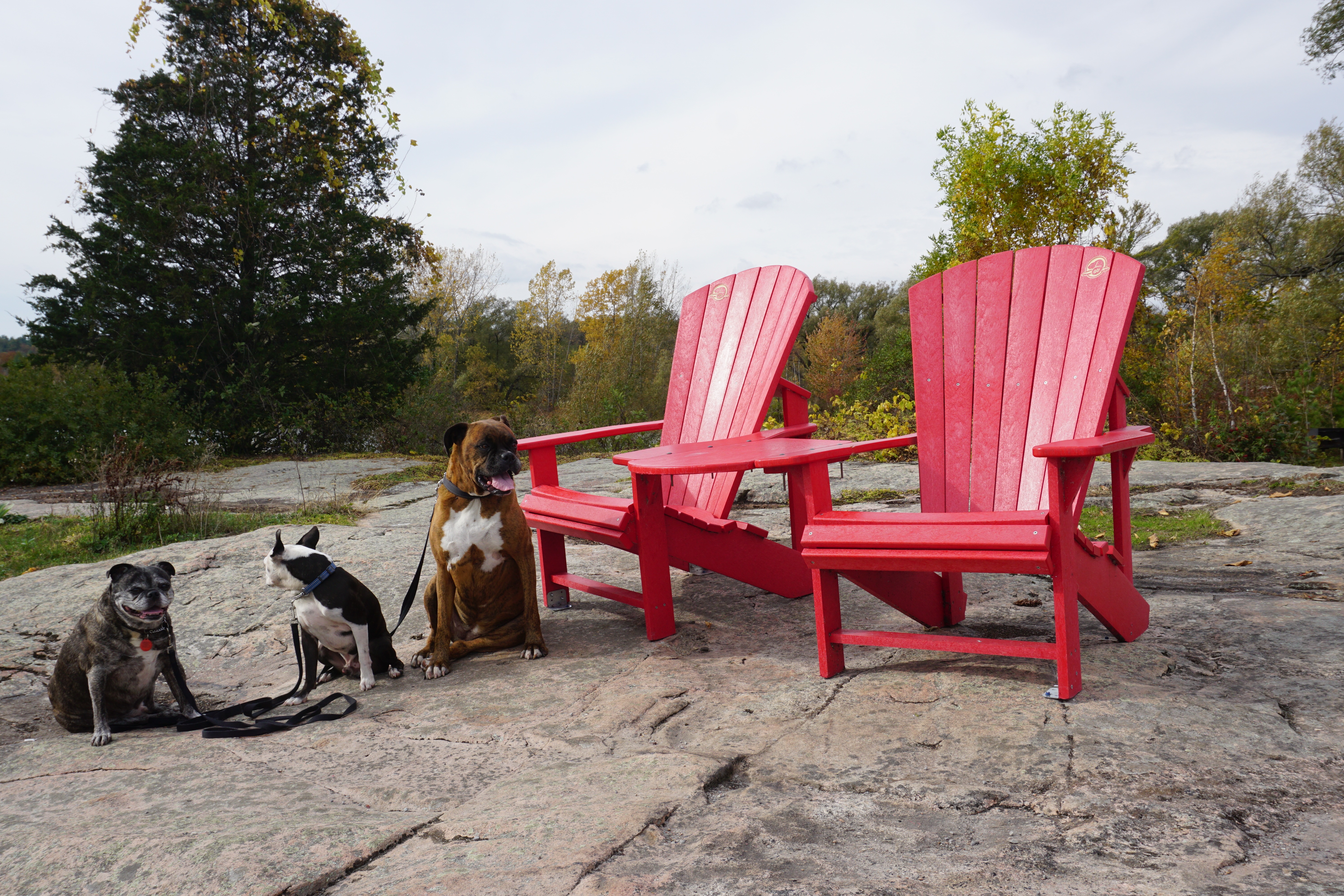 In celebration of the 150th year of Confederation, we are trying to visit every Canadian National Park that we can drive to.

I had saved the parks that were closer to home for later in the year when we could conceivably make it there and back in a day if need be.  Since Thousand Islands National Park is only a three-hour drive away, that gave us plenty of flexibility.

Perhaps because it was so close, I wasn’t too concerned about the pre-dawn start.  My biggest concern is usually getting across Toronto before traffic starts but since we were heading in the opposite direction, that lifts a huge weight off the shoulders and we had a leisurely start to the day.

Now even though it was leisurely, that doesn’t mean there still wasn’t business to take care of.  Namely breakfast.  Ok who am I kidding?  Second breakfast.  Or maybe brunch.  How could I be driving anywhere near Skylight Donuts in Bowmanville and not stop?  Errr I mean, how could I be driving by the off-leash dog park in Bowmanville and not stop?  For the dogs.  And donuts.

When I pulled up to the drive through window I literally lost the ability to form a coherent sentence.  It was almost like pulling up to a border crossing minus the inevitable super good-looking border guard.  So if nothing else I have learned that cute guys and fried dough are my weaknesses and I’m ok with that.  I asked the woman to just throw a half dozen of the the best donuts in the bag and ordered a coffee to wash it down.  She handed me my bag and a coffee with three dog cookies perched on the lid.  I had seen her eyes dart to the backseat but not a word was spoken about my companions.  Awesome.  The first donut didn’t make it out the lot and for a no-frills shack in a gas station, the coffee is surprisingly good.  The donuts are some of the finest I have eaten and if you’ve been reading for a while, you know that I have eaten A LOT of donuts.

There were a lot more dogs at the dog park than had been there on a previous visit and I will admit a degree of trepidation as we approached the fence.  I kept Piper on leash until she had settled down since I was worried about her legs.  Jack ignored all the other dogs and trucked his way around until he found an older gentleman and sat next to him.  Leo quickly found the most rambunctious group and joined in the fun.  Finally I let Piper go and she made a beeline for an absolutely stunning German Shepherd with an almost equally good-looking owner.  Atta girl Piper.  It’s good to see we have similar taste in men.  Then she went by him and my whole pack started to scatter through the park.  I soon found myself stooping and scooping and another scoop all while trying to keep an eye on everyone.  I started to see a bit of tension as everyone was getting more settled so I decided it was time to go.  We were the interlopers after all.

When I saw the signs for The Big Apple, initially I wasn’t going to stop since we had been there before but at the last second, I made the turn.  It was still a big tourist trap but they have added a dog walk area since our last visit and in keeping with short, frequent walk breaks, and to make me move after the first of many donuts, I brought the dogs out for a walk.  They were particularly interested in the petting zoo.  It’s also a good stop for clean facilities and locally made cider.

Thousand Islands National Park is a very small national park that is made up of separate chunks of land and also some islands in the St. Lawrence River.  The Thousand Islands Parkway splits from Highway 401 and runs along the shore of the St. Lawrence River.  There are sweeping views of the river as you drive but most of the the really good spots have no safe parking unless you want to stop in someone’s driveway.  There are a few small lots and we made the most of them when we could.  Leo naturally rolled to his little hearts content while Jack went straight to the water and Piper sniffed every nook and cranny.    It’s amazing how they all have their little routines. 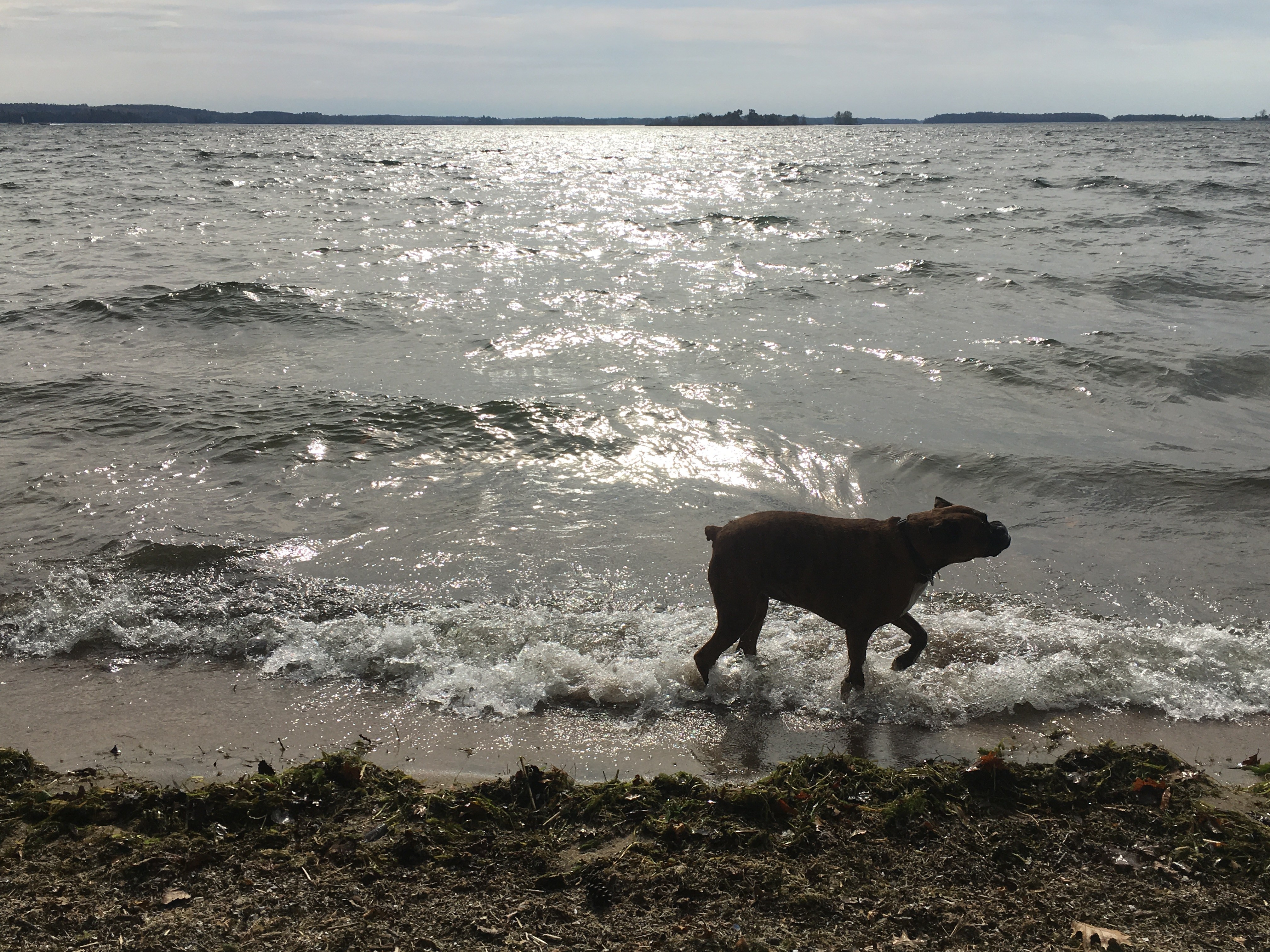 The visitor centre has some nice spots to sit and enjoy the scenery and even a large gazebo down by the water and we passed a few groups of people having picnics.  Naturally the dogs went to meet with their adoring fans and perhaps sample some nibbles. The path to the water is paved making it easily accessible.

I found a spot on some rocks at the water’s edge and the dogs all picked their way to the edge for a drink before two of the three sat down with me.  Jack likes to sit just close enough that he can touch you but make it seem like an accident.  Piper is completely unashamed of her codependent nature and likes to climb in my lap or with her back to mine so I can use her as a backrest.  Leo is usually too busy rolling or trying to find mischief that he doesn’t sit much. 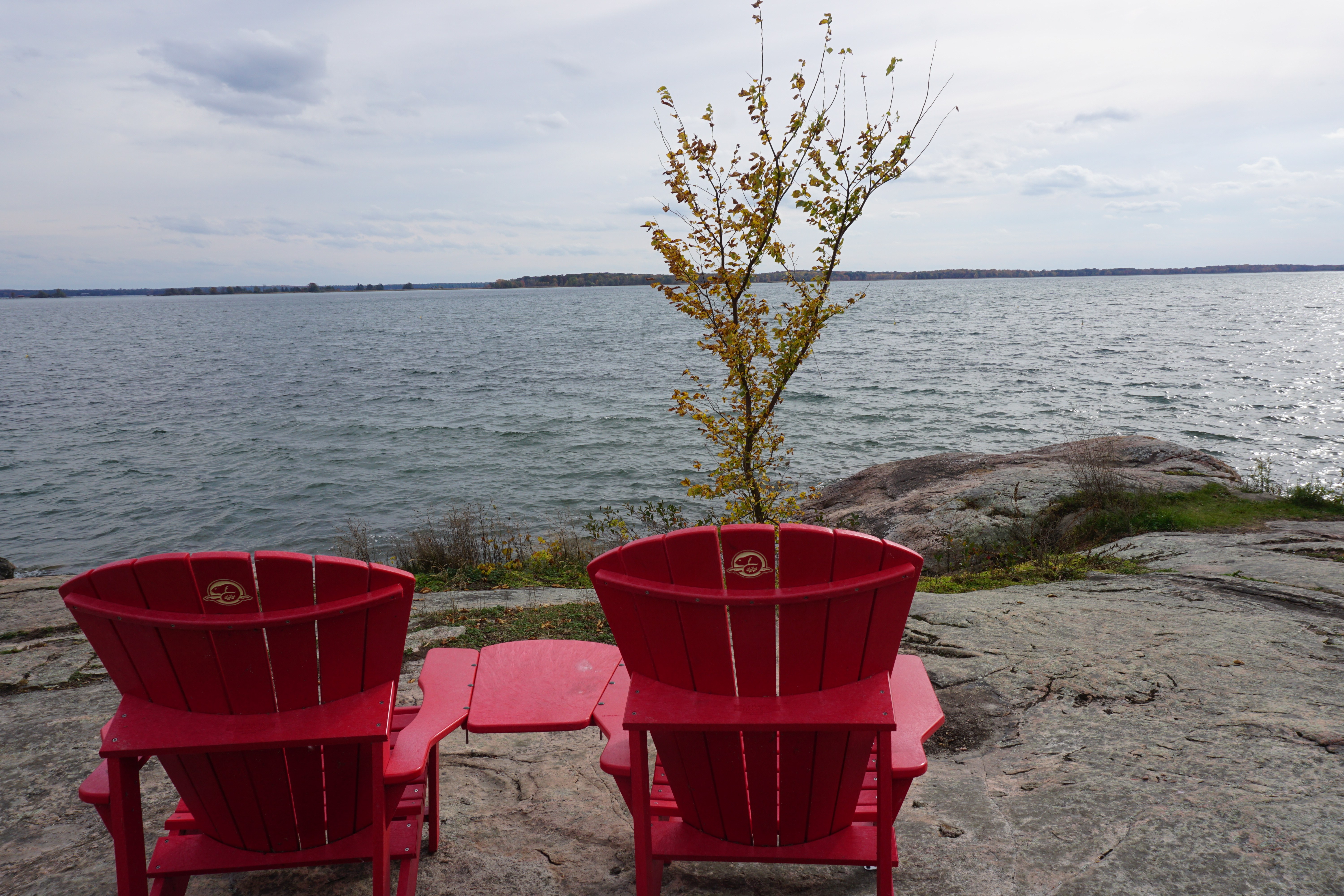 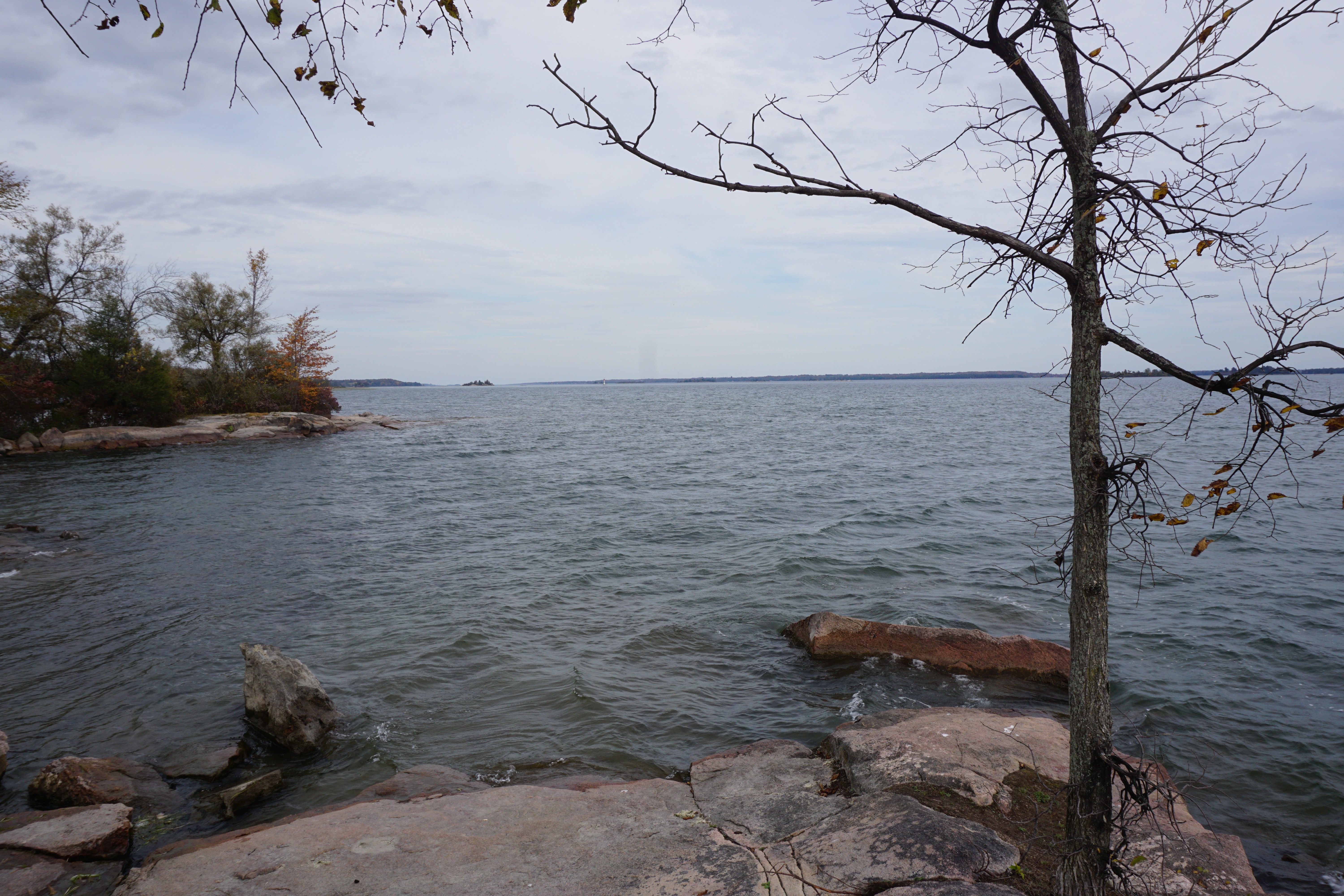 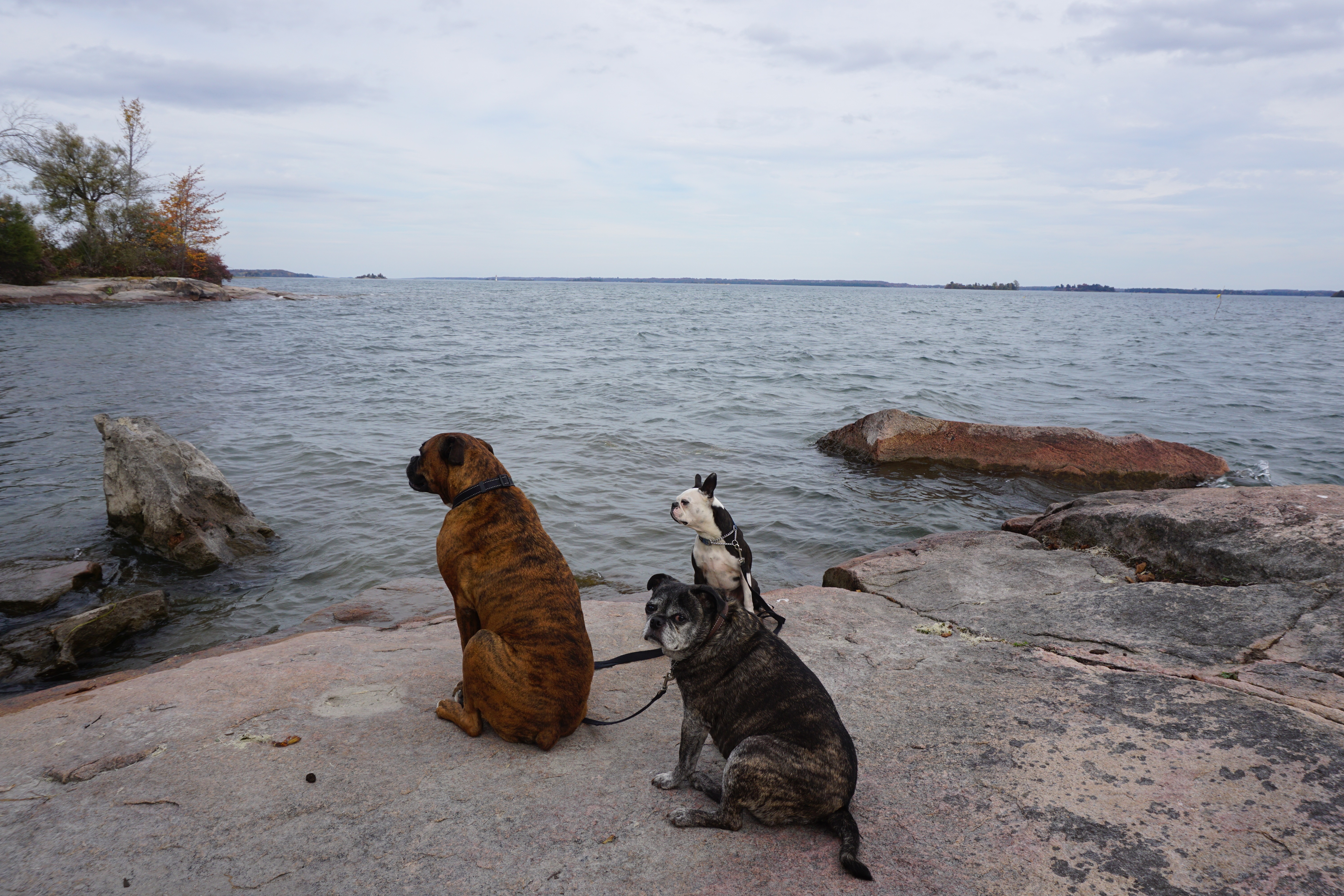 After my rear went numb, we made our way back to the car and went to find some trails.  By this time, we had stopped several times and there had been some climbs over some rocky ground so I decided that we would just take a short walk down one trail.  When we stopped at the trailhead, I noticed that there were signs for ticks posted.  I didn’t really pay them much attention since they had been posted in many places during our visit.  The trail started in a swampy area and then started to climb over some rocky outcrops.  After about 20 minutes I decided to turn back around.

We were almost back at the lot when I happened to look at Leo’s front left leg.  It’s totally white and his coat is very fine and I noticed something that seemed odd.  OH JEEZ LOUISE it’s a tick.  I ripped that thing off and pitched it into the grass.  I stopped the dogs on the gravel parking lot and looked them all over, even having them lay down to examine their bellies.  They had ticks literally crawling all over them.  It was like a horror movie.  OK maybe not that bad but when I can watch them crawling over the dogs, it’s pretty gross.  I honestly have goosebumps as I type this.

When I had made the dogs as tick-free as I could, I loaded everyone back into the car and we headed out of the park.  A friend of mine lives in Ottawa which is a four hour drive from home.  It’s only about an hour from where we ended up so naturally we stopped by for a last minute visit.  Now I will say that no visit to Ottawa is complete without a stop at Art-is-in Boulangerie and I snagged a few of the last croissants.   I had wanted to get some of the crazy grain bread but they were sold out for the day.  The croissants were a good consolation.

My friend’s boyfriend has a rescue dog named Cordy and my little Leo found a new playmate.  They booted around the backyard and I would have loved to get some photos if there had been any light.  After a dinner of skillet pizza and some catching up, we had to start back home.

It had been a long day but I felt fine.  Until we hit the highway.  That was when I hit the wall and I hit it hard.  At the next Onroute rest stop, I pulled over and put my head back for what I thought would be five minutes.  Forty-five minutes later, I woke up.  I guess I was a bit more tired than I had thought.  I find late night highway drives to be the absolute worst.

Fortunately the rest of the drive was uneventful and we all dragged our butts into the house and flopped into bed.  After one more tick check of course.

Take the Thousand Islands Parkway off the 401 between Brockville and Toronto.  The exits are all well-marked with signs.

There’s hiking of course and the park does stretch over the St. Lawrence leaving plenty to do on the water.  There are campsites on some of the islands that you can access by boat.

There’s also lots of historic sites nearby, especially if you want to make the trip to nearby Kingston to visit Fort Henry.  The nation’s capital, Ottawa, is only about an hour away as well.

There are no food places in the park itself but there are plenty of places in surrounding towns.