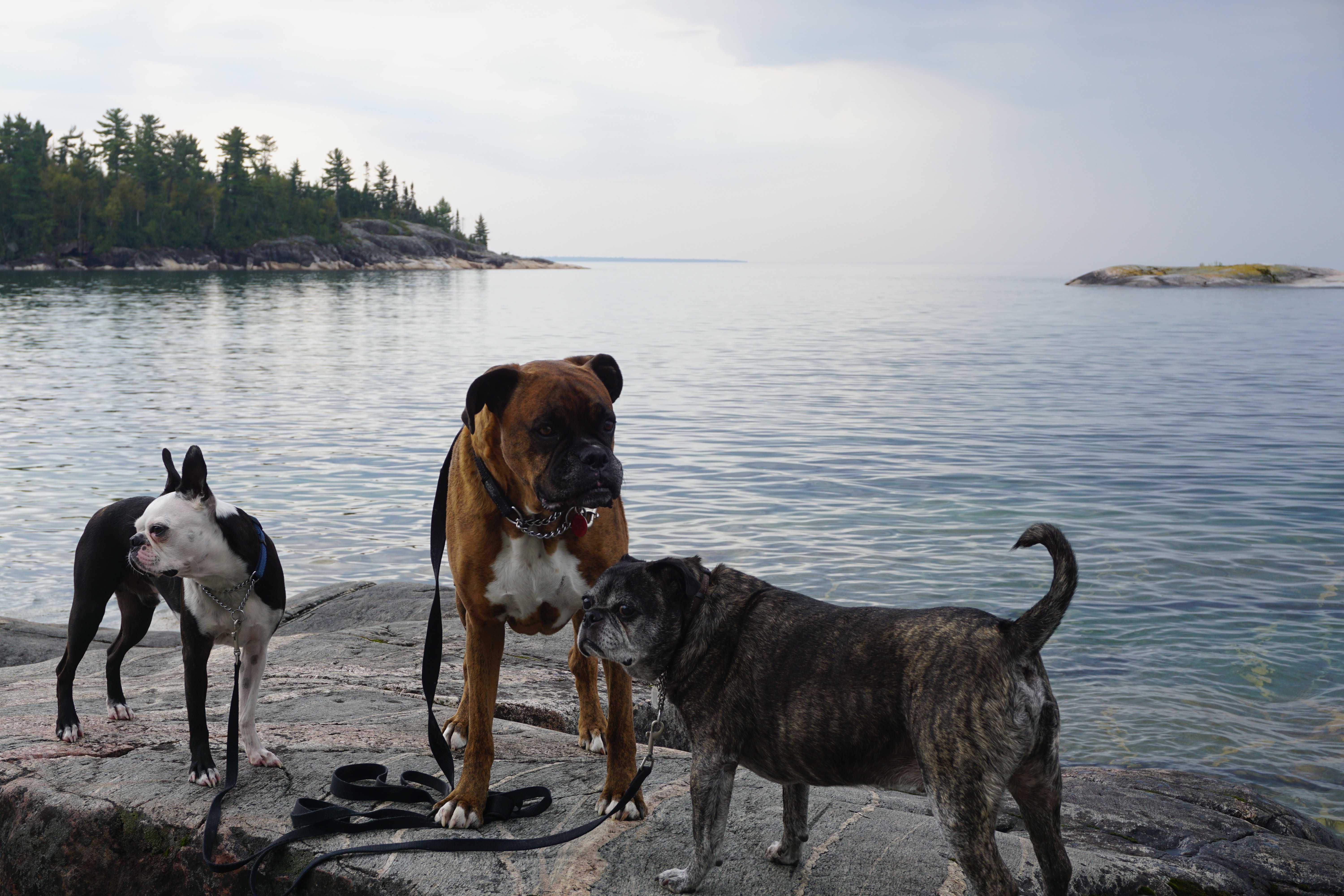 When I looked outside, I could see the rain reflecting the glare from the light standards.  We had outrun the snow in the mountains but apparently we could not outrun the rain.  As the dogs ate and I packed up, I decided that the goal would be to make the long drive home if possible.  Since the dogs are made of sugar and would melt in the rain (or so they think anyway), that meant we would be making fewer stops regardless.  One stop we were going to make was non-negotiable.

As I was still stuffed to the gills with the fish and chips and coleslaw and soupy salad from the night before, I wasn’t even a little hungry as we left Thunder Bay.  I didn’t even stop for coffee (gasp).  We were well out of the city when I found a quiet spot to stop and let the dogs run in the water of Lake Superior.  I wanted to give them a bit of stretch before we arrived at the last National Park of this trip: Pukaskwa National Park. 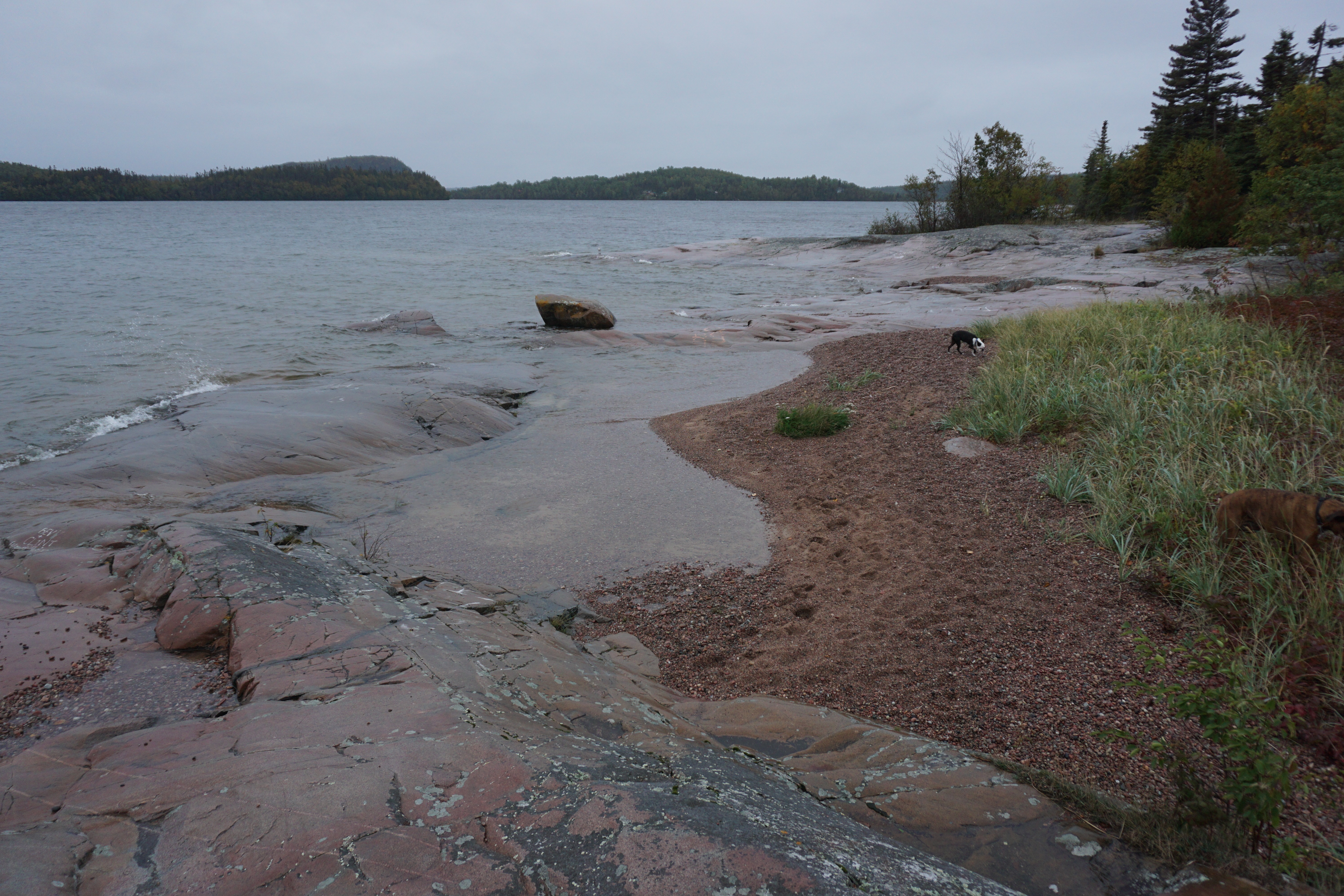 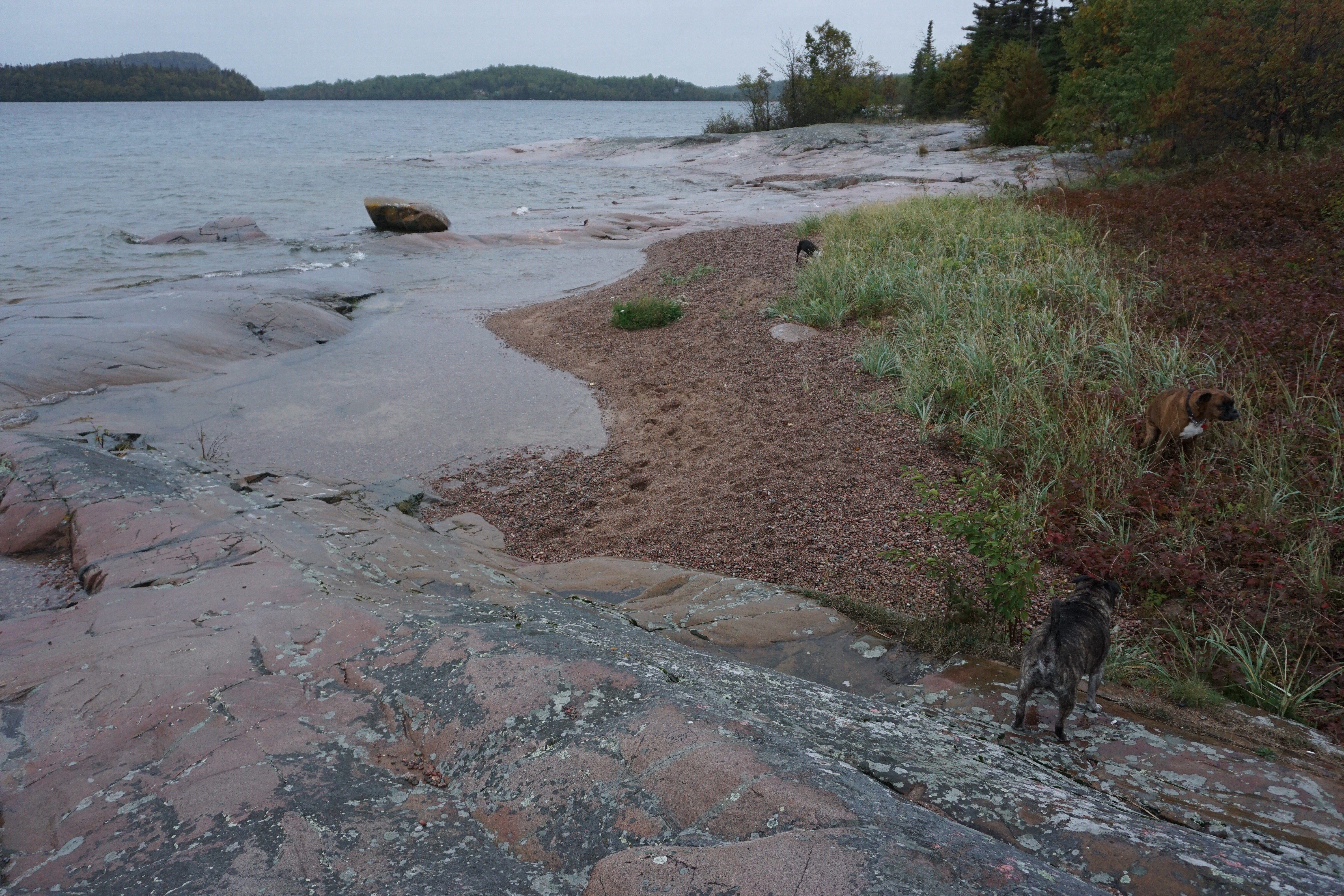 The rain was falling steadily when we parked the car in the lot near the visitor centre.  I was tempted to say damn the rain and explore the trails, but my better judgement took over.  The area is known for unpredictable weather and a light drizzle could quickly turn into a downpour that would make walking treacherous.  That’s bad enough for me but the thought of Piper turning a leg made me really wary of where we walked.

We did walk down to Hattie Cove and I was surprised to see some stairs that led into the water.  Not just to the water but under the surface of the water.  I’m guessing the stairs were there to prevent damage to the shoreline and allow for people to get in and out of boats and canoes but I was mostly thrilled about the easy access for thirsty dogs.  Oddly enough they did not want to play in the water.  Maybe it was because I kept them on leash instead of letting them run amok.  The trees were so thick that it would have been easy for someone or something to get close without me seeing them and I didn’t want to take that chance.  The rain was also the reason I left my camera in the car and took these photos with my phone.  They aren’t quite as nice. 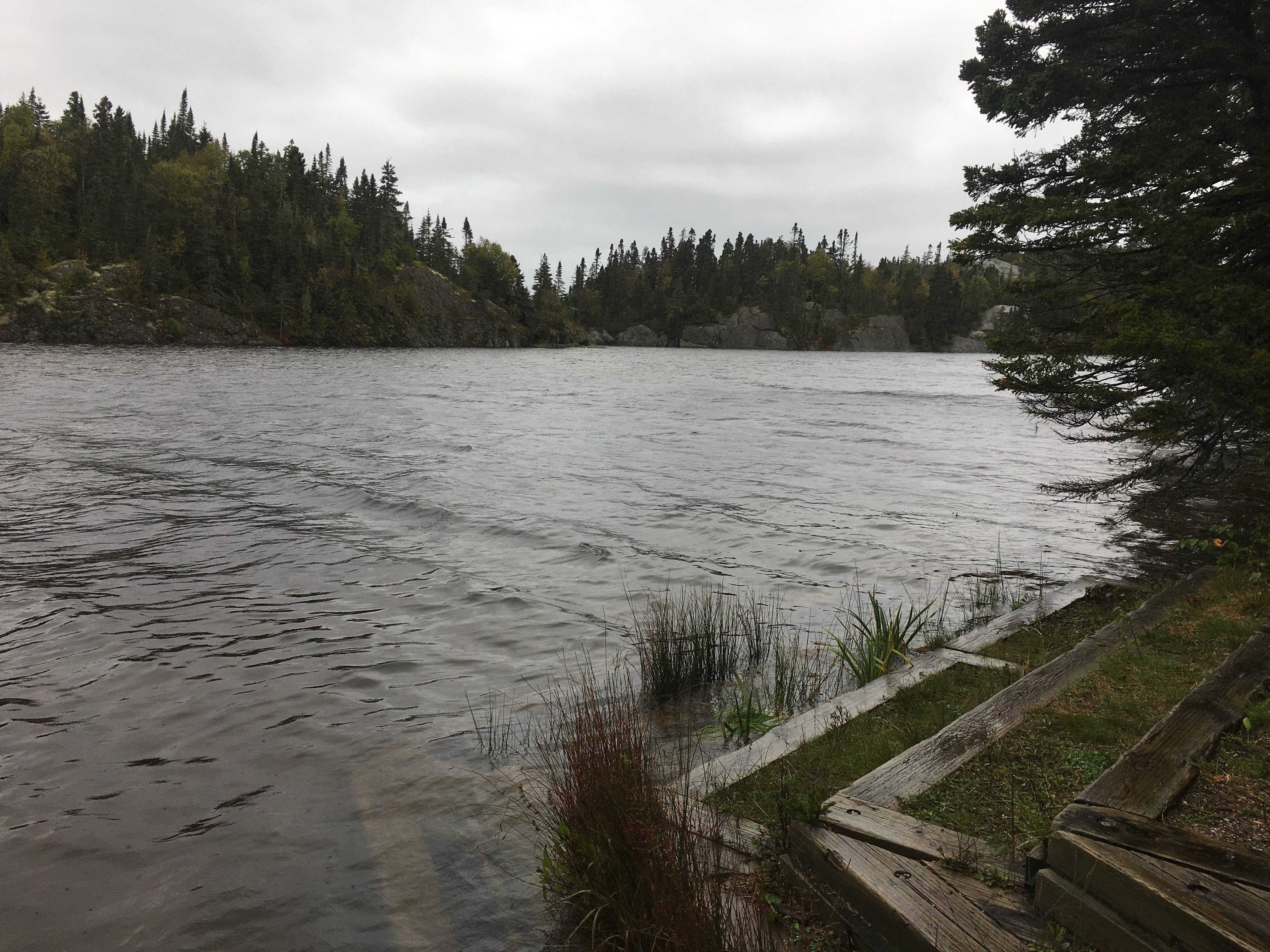 On the way back to the car, we stopped to look at some moose statues.  I had expected at least a little reaction from the dogs but I guess after all the real wildlife they have seen, a couple of big metal moose that just stood there were no big deal. 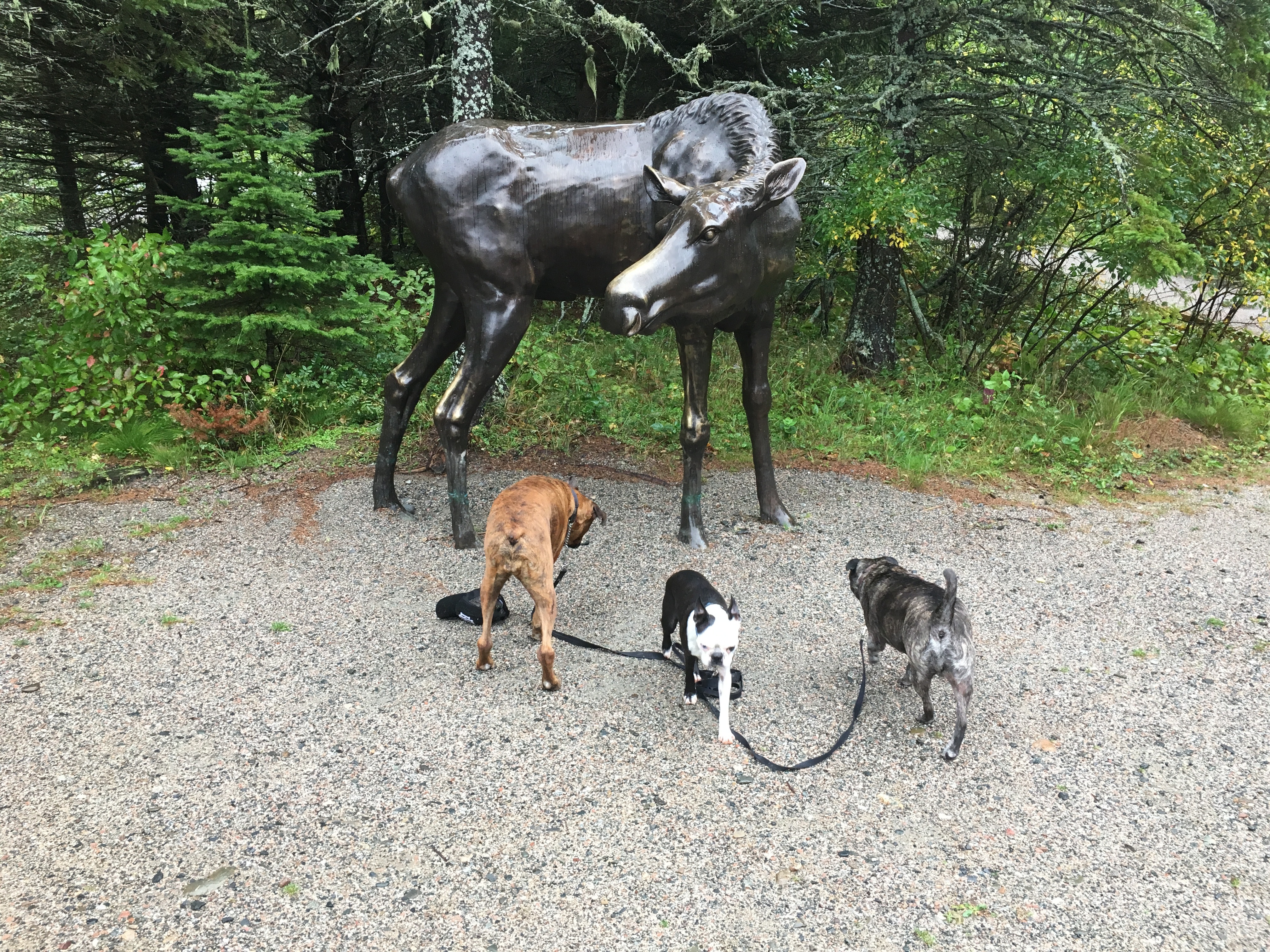 There are no roads leading through Pukaskwa National Park and once I had loaded the dogs into the car, we drove back to the highway and continued the trip south and east.  The rain finally let up as we were approaching Lake Superior Provincial Park and even though it’s not a part of our National Park tour, I love the area too much to pass up a chance to stop.

We pulled off the Trans-Canada Highway and were soon clambering over boulders to find just the right spot to sit and enjoy the view.  It was still overcast but the heat of the day had dried the rocks beneath us and the water softly lapping against the shore brought on a sense of calm.  I didn’t have to call the dogs to me; after they sniffed around, they all came and sat down next to where I was lounging.  Even little Leo was content to sit still for a few minutes.  Soon a numb butt and the call of the road had me back up and picking our way back to the car.   Of course that was when they decided to go for a swim.  Not when we first stop so they have a chance to dry a bit.  Oh no of course not.  These little monkeys wait until we are mere steps from the car when they go bounding into the water.  Thanks guys. 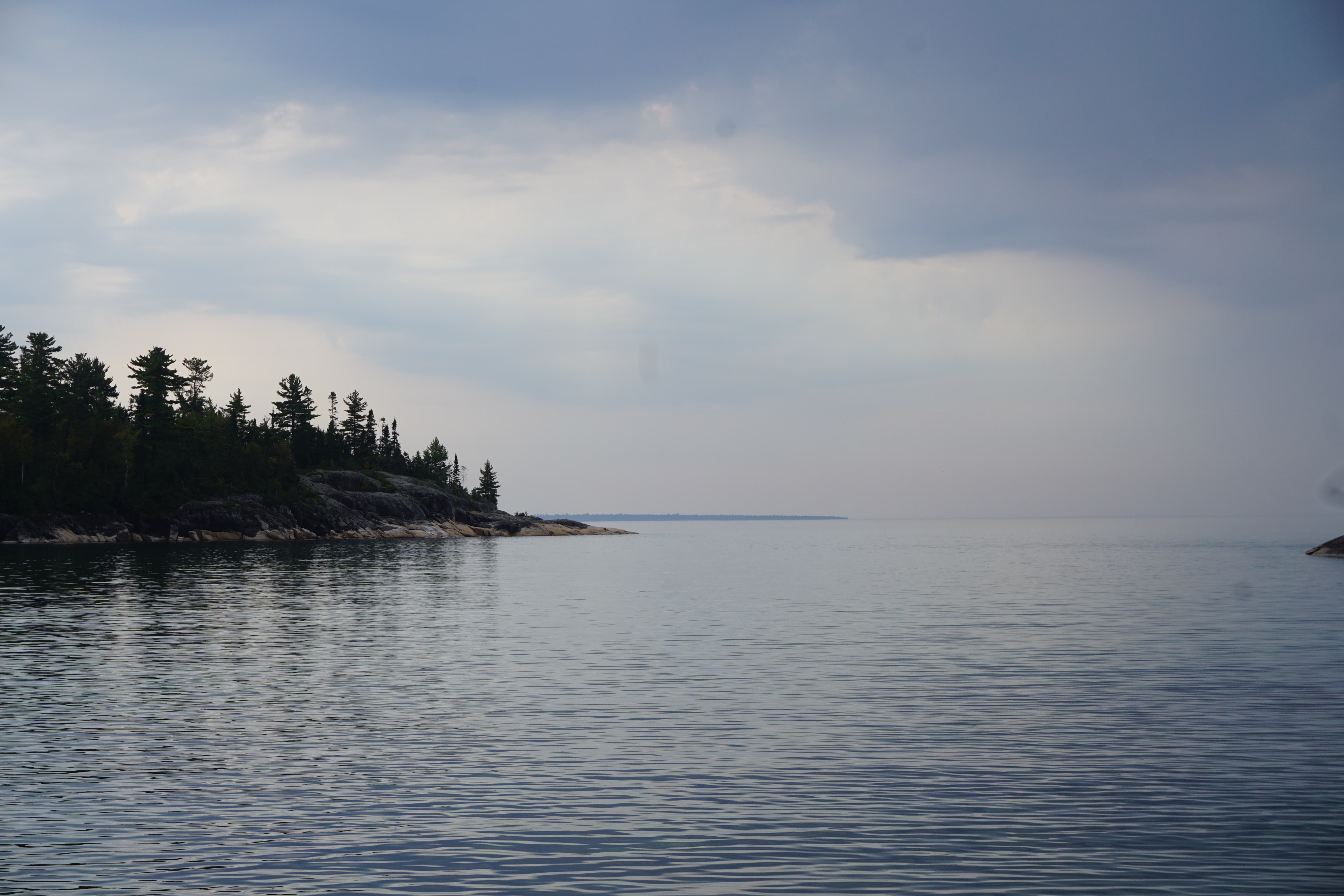 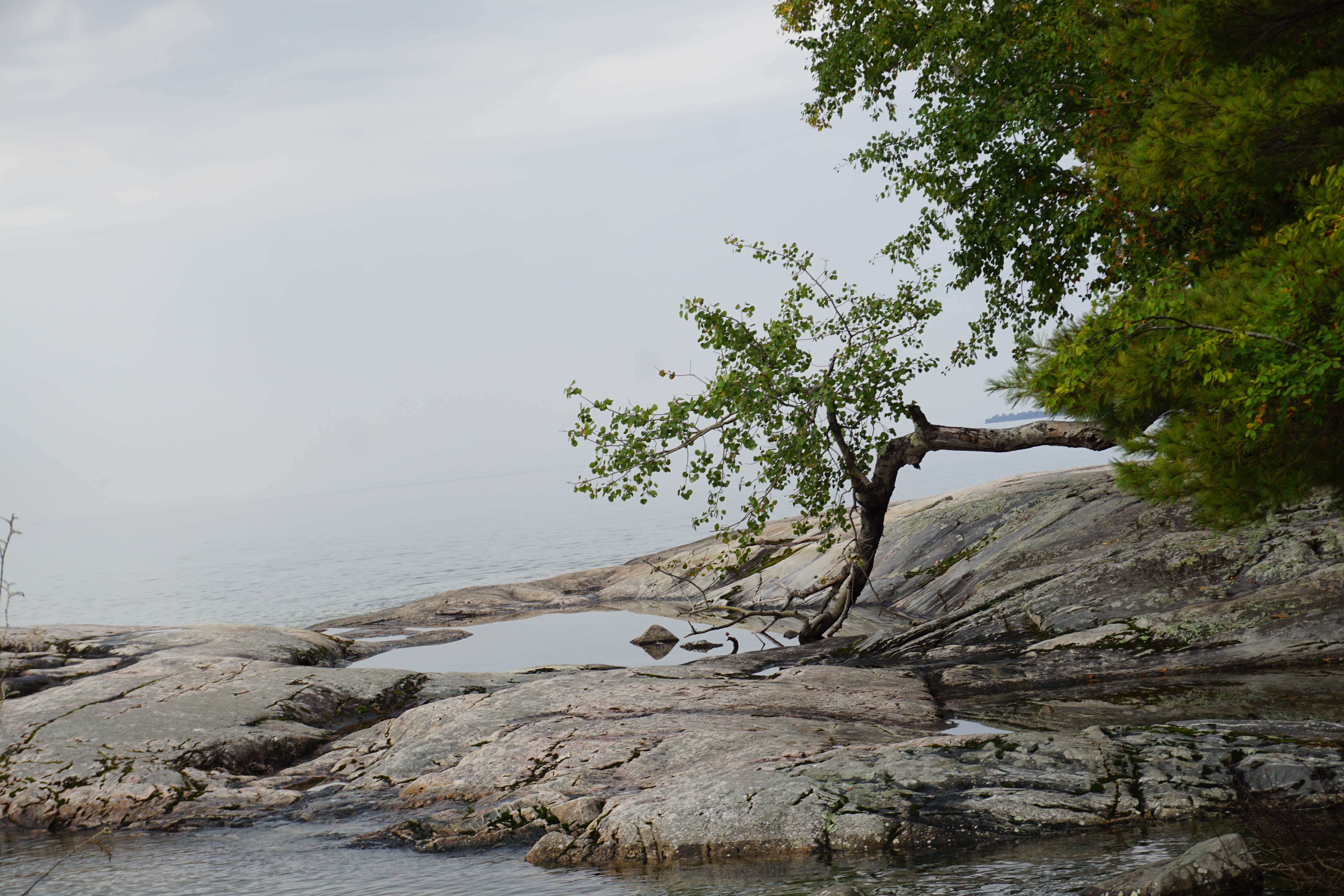 Maybe because we had not had much exercise, I pulled the car just off the highway at a spot where I had stopped during our last trip down the highway.  There were a few other people there but we found some space on the long rocky beach where I could let the mutts play a bit.  I wanted to look at the place where we had found snow at the end of May but a gentleman was there first and I didn’t want to bother him since he did not seem too impressed to see the dogs. Then my attention was caught by some strange pastel colours nestled among the smooth beach rocks.  Someone had left painted rocks all over the beach.  I had never seen these before and soon found myself hunting for each rock like a kid looking for Easter eggs.  Except there was no chocolate involved.  Darn.  Whoever went through the time to make these rocks is just amazing.  I wish I could thank them personally.

I was a little perturbed when I saw a couple hauling bucket after bucket of the rocks into their car.  The only thing I could think was that they were taking them for landscaping and was bothered by how many loads they were taking.  I know that they are rocks and the beach was deep in them but I couldn’t help thinking about how quickly that would change if everybody did the same thing.  I was tempted to say something but the little dog that was unleashed and running around their feet didn’t look like it would take too kindly to my dogs coming closer.  They drove off as I was getting my dogs sorted so I couldn’t dig deeper into what they were doing.

By this time, my stomach was growling along with the radio.  With Sault Ste. Marie approaching, I decided that we would stop there for a bite.  I was fuelling the car when I saw a sign for Chummy’s Grill.  Well I’m not sure what kind of a guy Chummy is but I know I like all kinds of grill.  With no patio, it was going to be a to-go meal and I stood staring at the menu board.  One of the staff recommended the Indian taco and am I ever glad she did.  She explained that it’s basically a taco with meat, lettuce, tomato, and cheddar cheese on top of a scone.  The scone bit threw me until I actually got my order.  The “scone” was not your English-style scone but looked and tasted more like bannock.  This was a really filling and really delicious meal.  Having said that, some outdoor seating would have been nice.  Actually it would have been nice to sit inside since there were all kinds of really amazing wood carvings that I wanted to take home with me.  Alas, the poor trunk of my car was full.  I went out to wait with the dogs for my food while I scouted a place to sit.  It was stinking hot and so rather than sit in the trunk of my car with the dogs on the hot pavement, I sat on a bench in a shady spot near the front door.  The lawn around me was littered with “No dogs allowed” signs so I get the feeling that dogs aren’t really that welcome.  Then a gentleman came out of one of the other doors to the building and ohhhhhh Nelly you better believe I got the stare down.  I had made sure the dogs were well away from all the doors and were not impeding any of the people that were around which was easy because no one was around us.  I looked him in the eye, smiled sweetly, and shoved another forkful of taco in my mouth.  Fortunately he didn’t say anything and I was able to enjoy my meal in peace.  Oddly the dogs did not get as much of a sample as they usually do.  Probably because I crushed that taco in zero seconds flat.  Pleasantly full, I loaded the dogs into the car and we continued on.

With the temperature becoming more bearable, I stopped to let the dogs out for a quick stroll in Serpent River.  There is a rest stop and if you follow a very short trail, it takes you directly to a small waterfall.  As we were the only creatures around, I let the dogs explore a little since this would likely be the last chance until we got home.  While the dogs are normally quick to walk in almost any water, I was glad to see that they all kept a safe distance from the waterfall.  They aren’t scared of heights but they’re smart about fast moving water.  Or maybe Piper thought it was another glacier-fed river and I was going to shove her back legs in again. 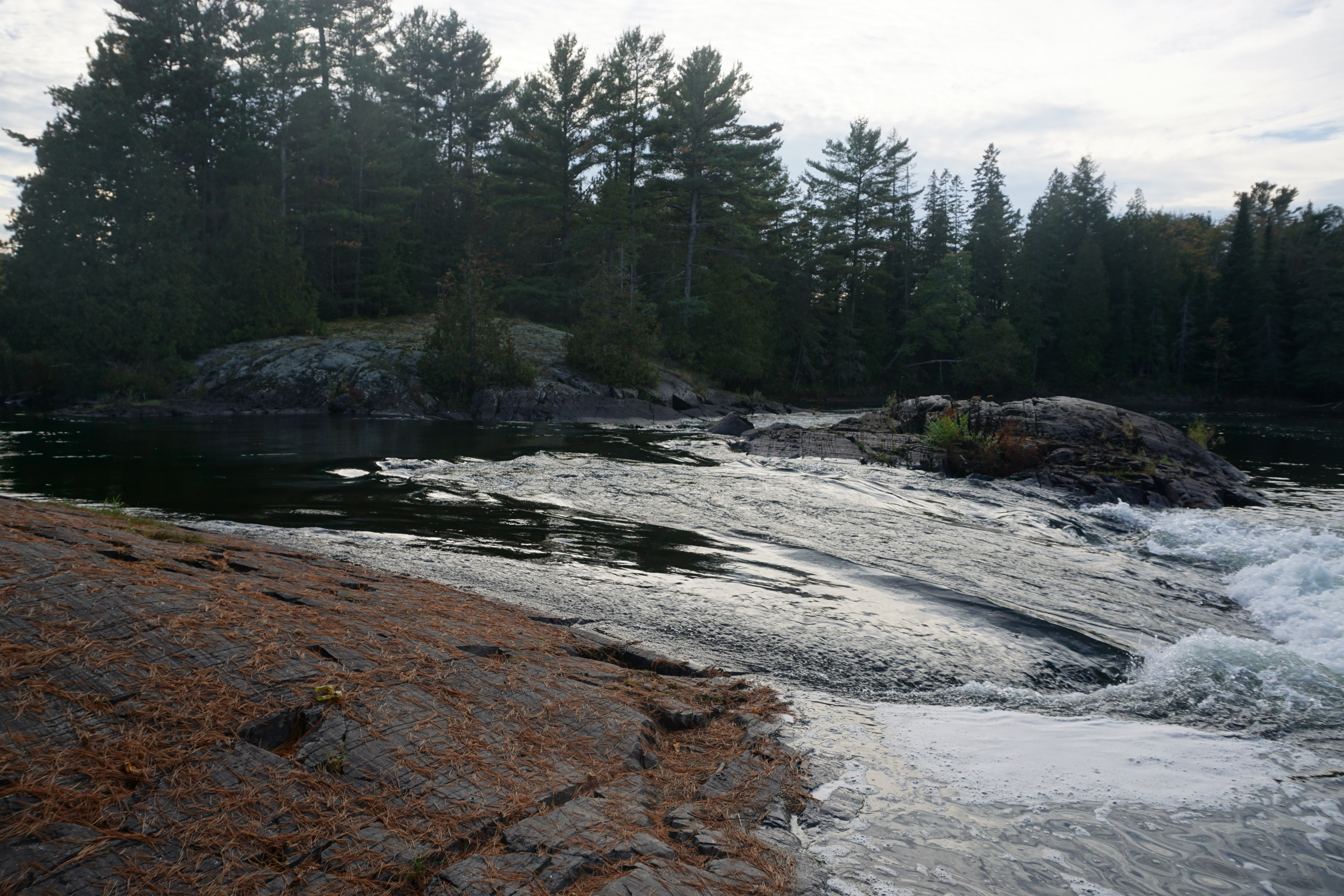 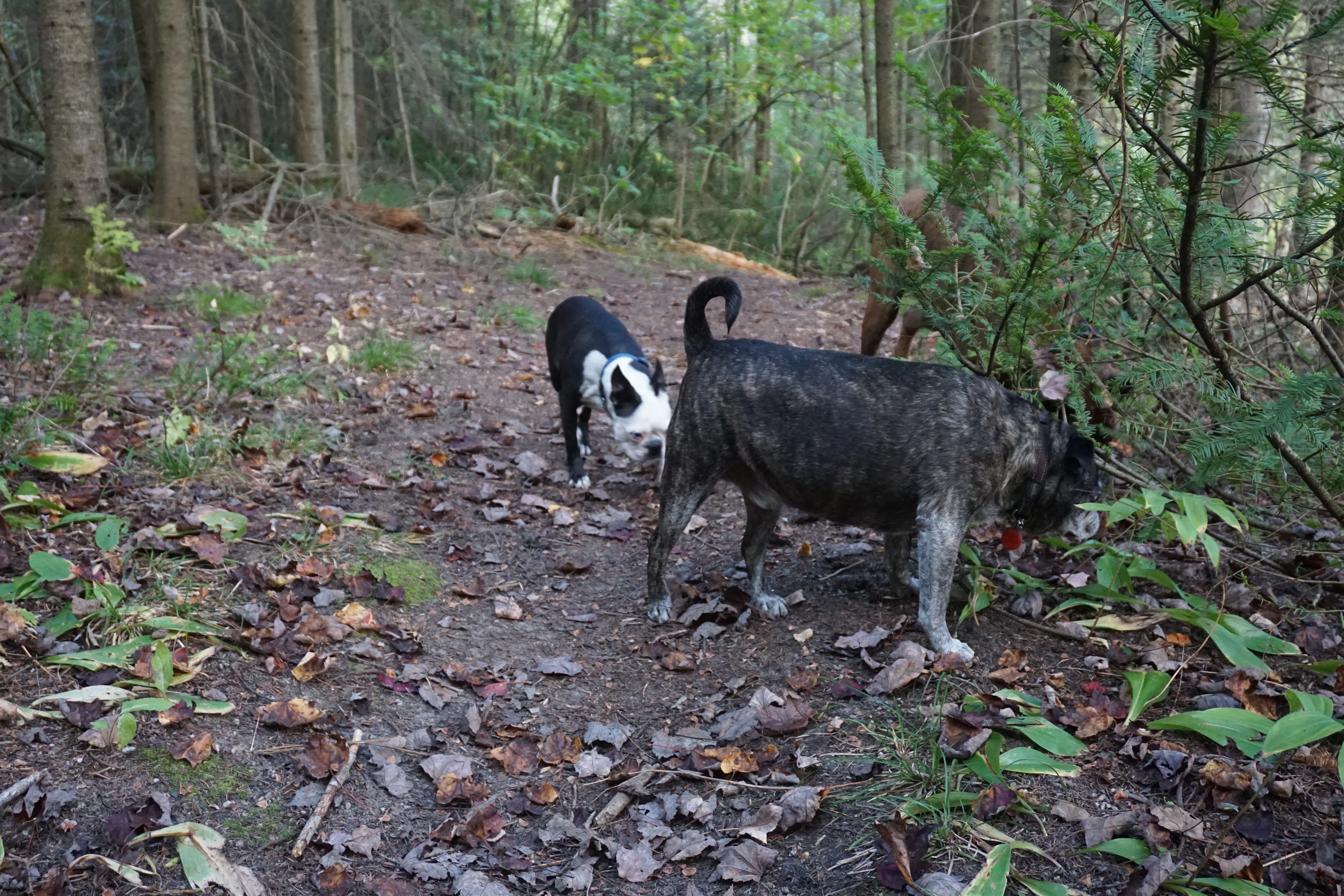 We drove on into the falling darkness, finally leaving the Trans-Canada Highway behind for the end (or beginning) of Highway 69 which becomes Highway 400, one of the major roads into Toronto.  When we rejoined the Trans-Canada, we were one of the few other cars on the road making our way through an inky blackness pierced only by the feeble lights of my car.  I was glad to be seeing familiar landmarks in the night but sad that our time on the road was coming to an end.

Take the Trans-Canada Highway either east from Thunder Bay or west from Sault Ste. Marie then turn onto Highway 627.  The highway ends at the Visitor Centre in the park.

Another option is to boat or canoe into the park as it stretches along the coast of Lake Superior or from White Lake Provincial Park to the east of Pukaskwa.

The Coastal Hiking Trail is a huge draw, stretching along 60 km of the shore of Lake Superior.  There are 11 primitive campgrounds along the length of the trail.  It is a tough out-and-back trail that I may have attempted when it was just a healthy Piper and I.  There are also day use trails around the Hattie Cove campground.

However, if one is going to visit the world’s largest lake (by surface area), getting out on the water would make sense.  There are protected coves as well as the Coastal Paddling Route that starts in Hattie Cove and runs south.