I was happy to see that when we got out of bed Piper was not limping and was not even noticeably favouring her leg.  Chalk one up for short walks and glacial soaks.  Not wanting to push our luck, the dogs went for a very short walk and I left them with their breakfasts while I went to the communal kitchen building to get mine.  See, the cabins at Mountain View Cabins were basically a bedroom and a washroom.  All the cooking was done in a separate building.  It was interesting to have a kitchen and picnic tables in a shack.  I seemed to have been the ninth wheel as everyone else was already gathered around one table with no space for me so I sat by myself with a quick breakfast of instant oatmeal and coffee before I went back to our cabin.  Small confession: I’m not always the most outgoing and rather than interrupt the well-bonded group I had walked into, I just kept my head down and left.

It was raining lightly when we left to continue along the Trans-Canada Highway 1 but it started to come down much heavier when we passed into Glacier National Park.  I stopped at the visitor centre and was drenched during the walk from the car so needless to say, we did not do much exploring.  I was a little disappointed but it’s probably for the best as it gave Piper more time to rest her legs.

A short distance after we crossed the western boundary for Glacier National Park, we arrived in Mount Revelstoke National Park.  The rain was much lighter by this point but we didn’t get many chances to get out of the car because unlike all of the other parks, the highway basically skirts one side of the park until the southwest corner where a road takes you to the top of Mount Revelstoke.

We stopped partway up the mountain to take a look at the town of Revelstoke below before continuing up.  Slowly the ground was covered with a dusting of snow and finally we reached the top.  I left the dogs in the car as little Leo has zero in the way of a winter coat and it looked like everywhere from the parking lot involved some kind of hills which made it a no-go for Piper.  The trails weren’t very very marked so I wasn’t sure if there was a trail to the summit proper.  I did however find a couple of red chairs for photos. 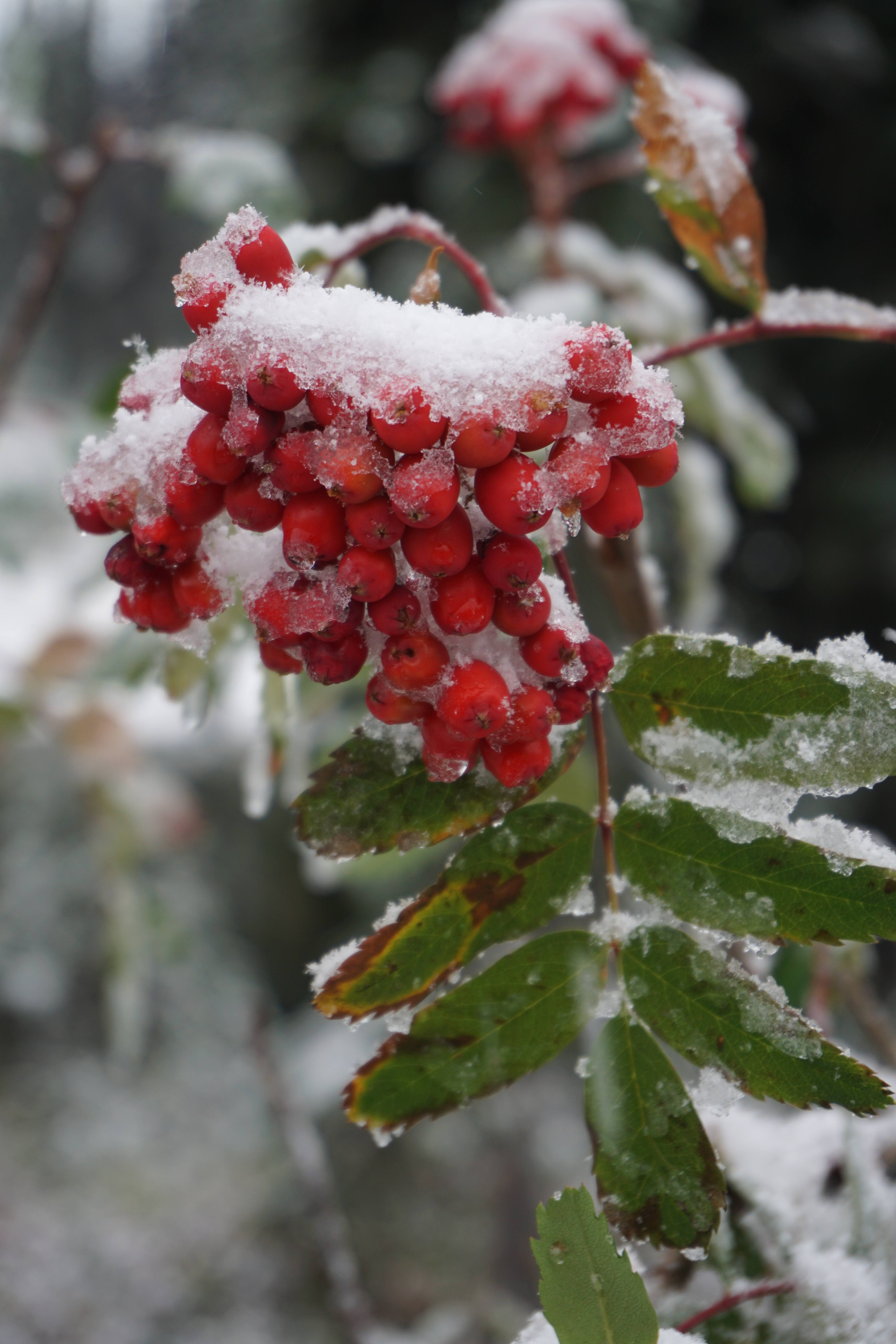 On the way back down the mountain, I stopped at a lot just shy of the summit and was able to get a few more pictures before I lost the feeling in my fingers. 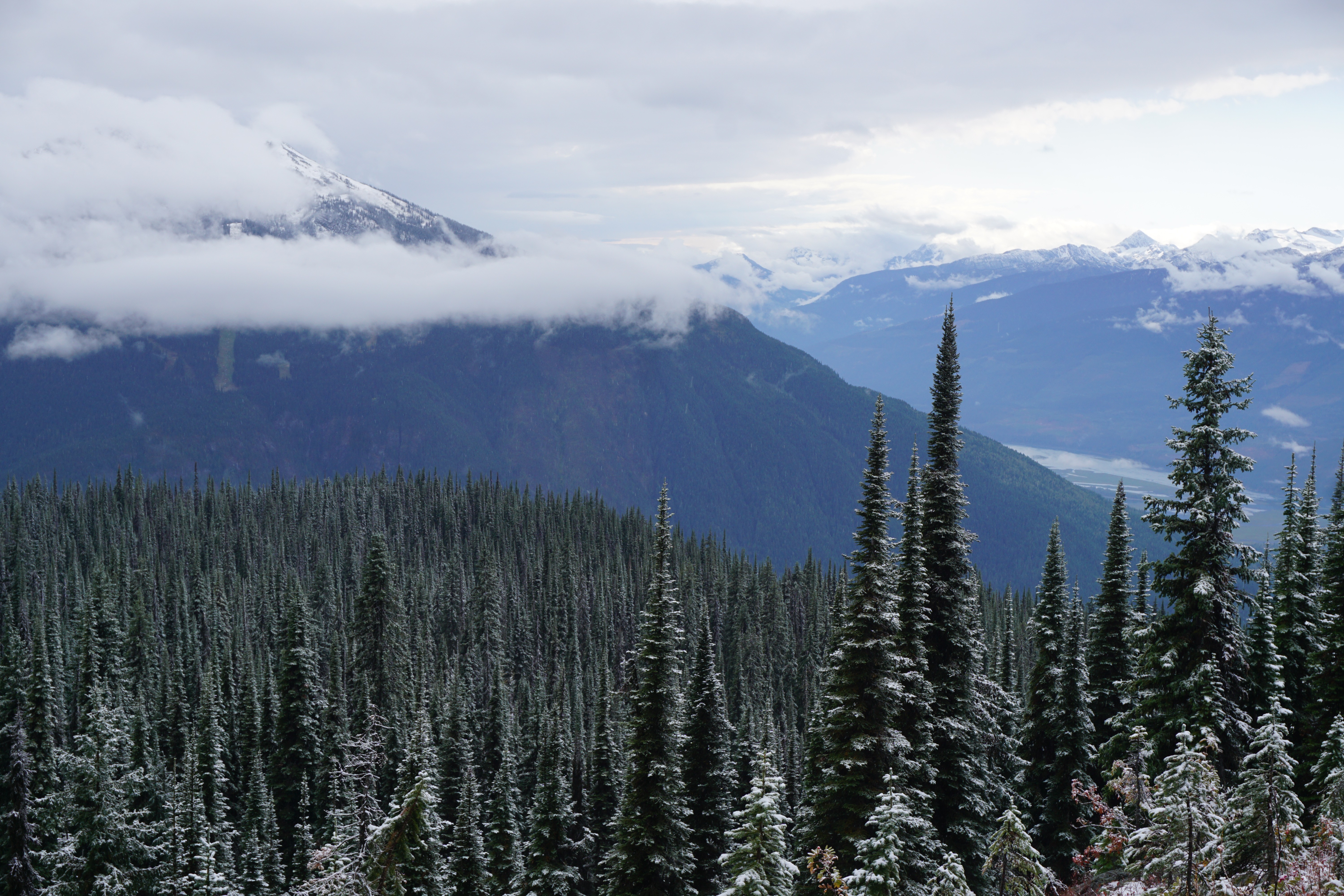 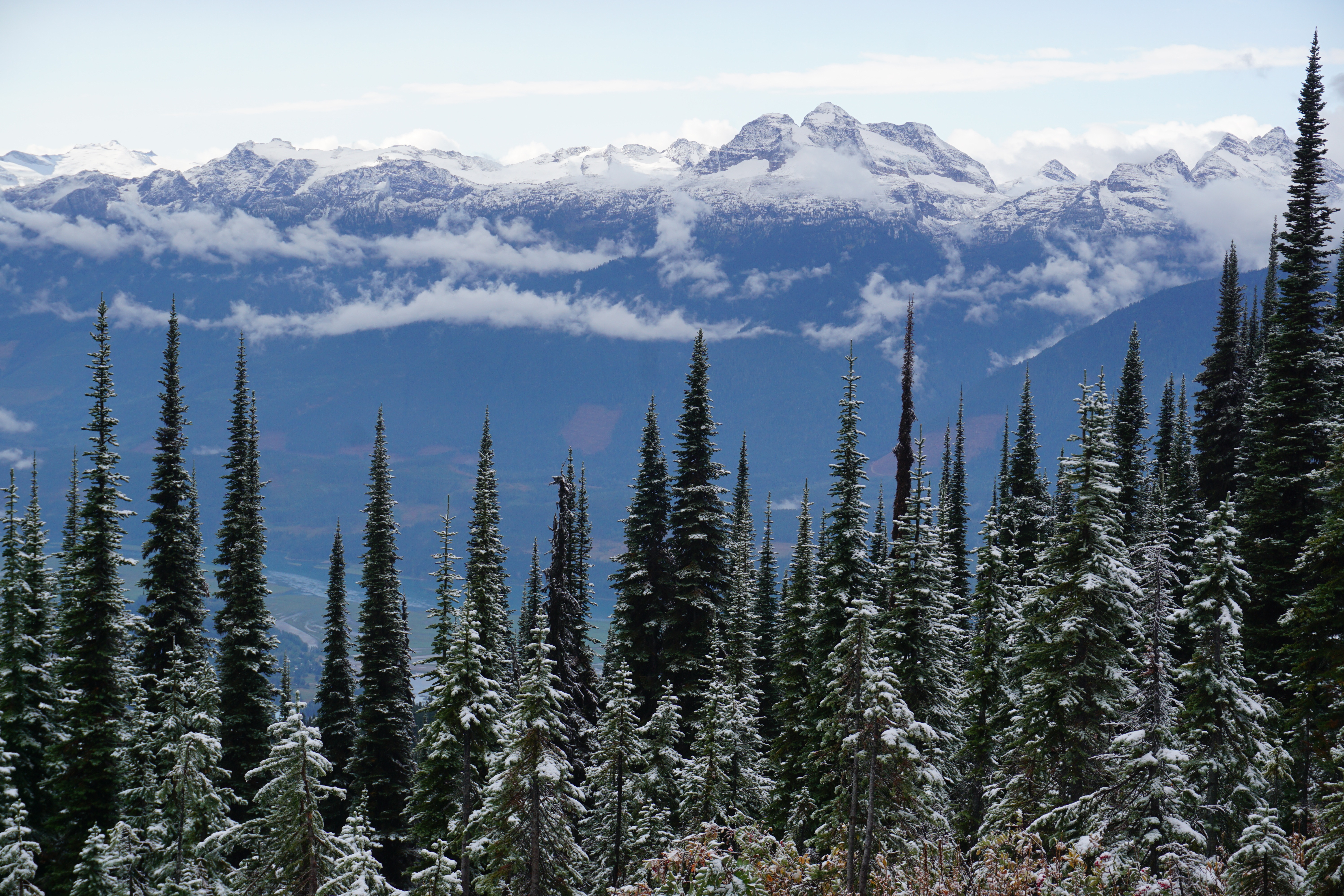 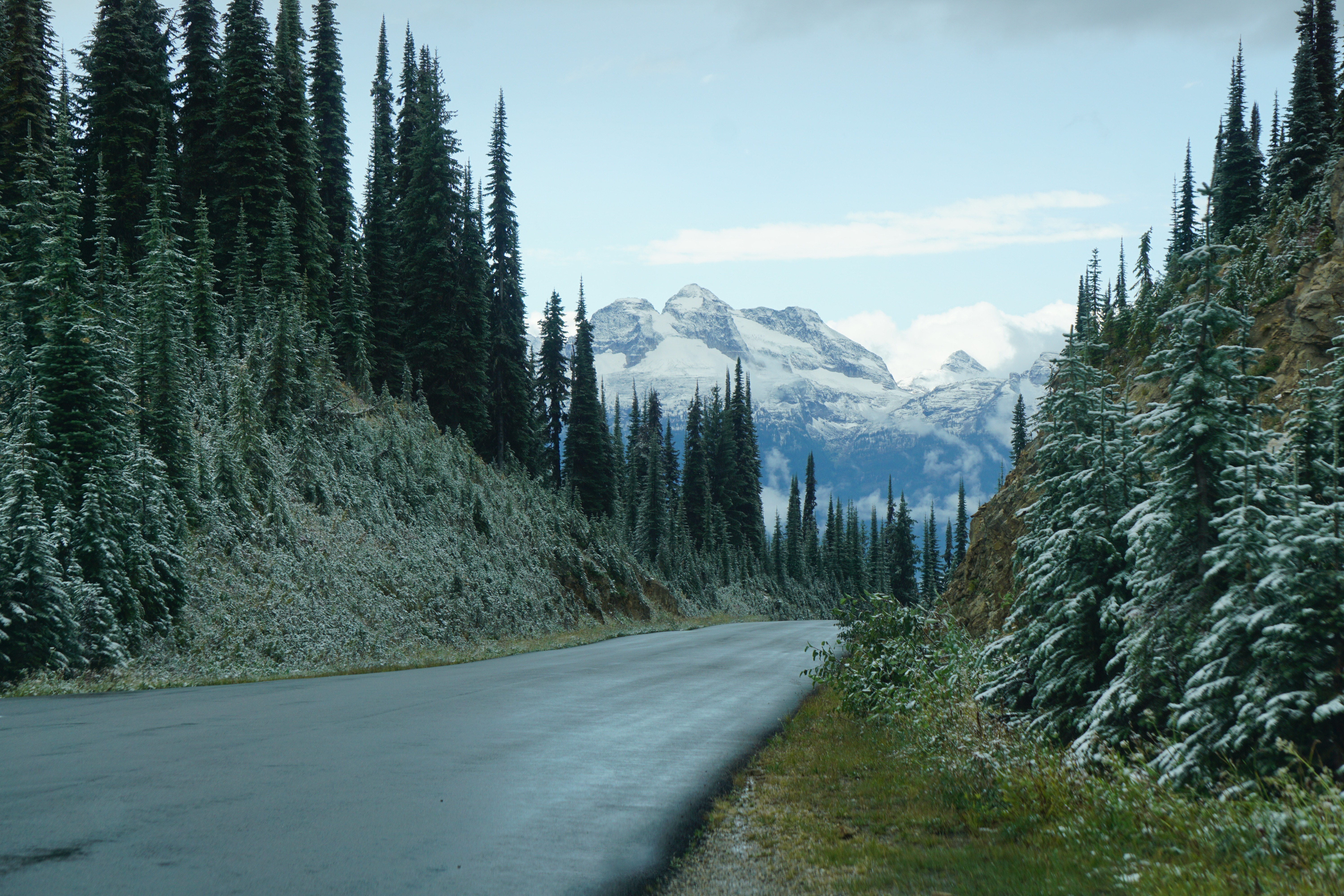 Once I was back in the car, we continued down the mountain and when we arrived in Revelstoke, I decided that I needed a bite to eat.  The Modern Bakeshop & Cafe seemed like it would be the place for a cup of coffee and a sandwich.  I decided on the yam sandwich with an americano and a peanut butter cookie.  I’ll admit that I dropped the ball on the photo with this one because I demolished that sandwich in short order.  Take my word for it: de-li-cious.  The dogs liked the little pieces of peanut butter cookie that they got to sample.

Since time was something of an issue, we did not stop much after that except for one quick photo at 3 Valley Gap.  Just to give fair warning: the place where we took that photo is purely tourist and dogs are not allowed on the property.  I figured that the three steps from the car to the trailer would not get us in any trouble.  There was a rest stop a short distance down the road on the side of a lake and I let the dogs go there for a drink and a splash. 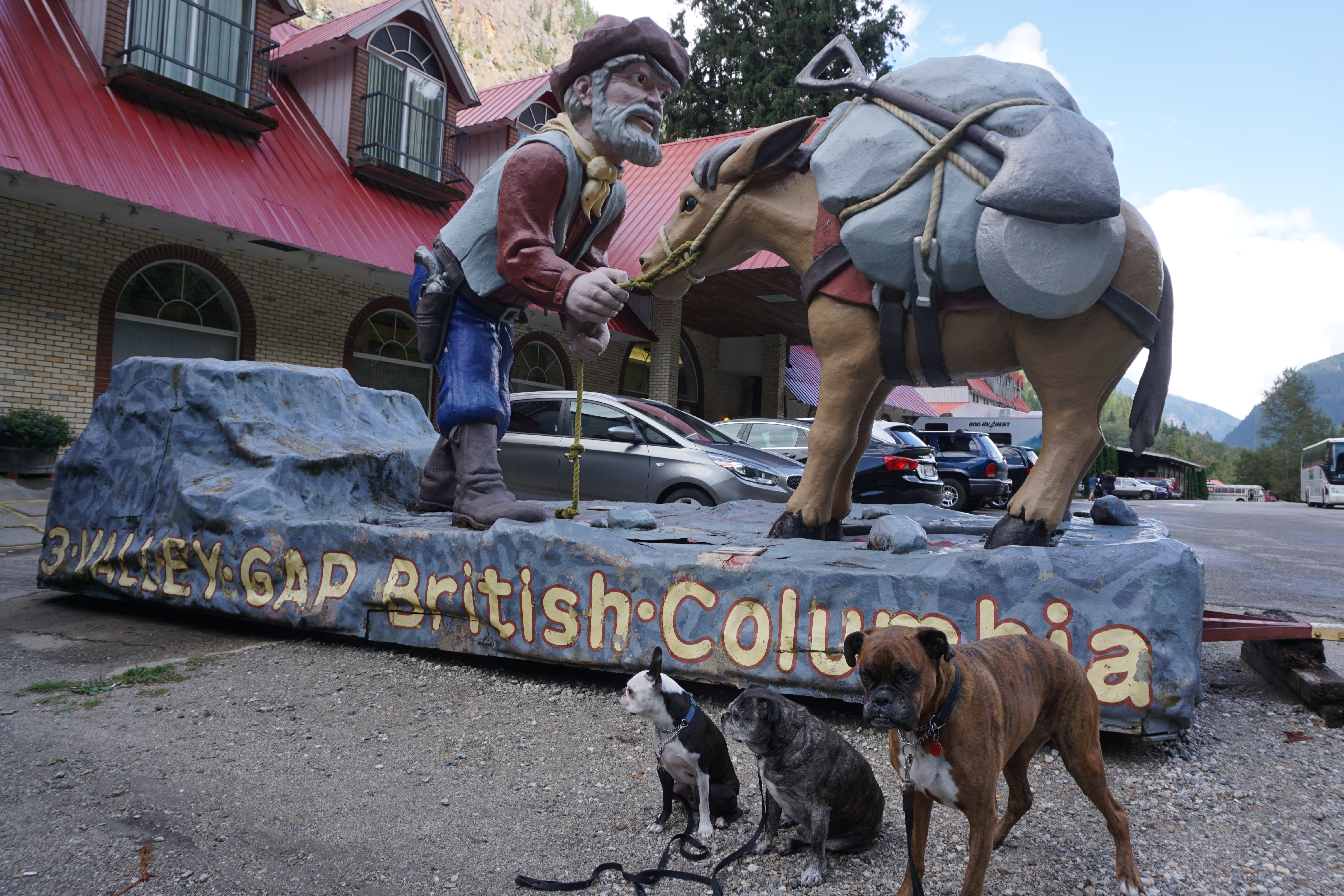 We did not stop again until we arrived at the ferry at Departure Bay.  We were directed to one of the lanes, parked, and sat at a picnic table until the boarding call was announced.  Fortunately this is one of the ferries that allows you to stay in the car for the ride.  Otherwise we would have had to go sit in the pet area and that would have sucked as it was too cold to sit on the outer decks.  It would have sucked to sit in the pet area too: a metal box of a room that would have drained all warmth right from our bones with the cold and damp weather.

While we were in transit, I took the opportunity to find a place to spend the night.  It would have been nice to camp but the rain was supposed to continue all through the night.  Damp and cold?  No thank you.  I finally settled on Value Lodge Economy Motel in Nanaimo on Vancouver Island.

It was a dated motel and when I checked in, I was surprised to learn that even though Expedia said no pet fees, I was still charged a pet fee.  Oh is that ever infuriating!  When I showed the ad to the staff member, he merely shrugged his shoulders and said I’d have to talk to the manager in the morning.  Fine.  Then I went to my room.  It was clean but it smelled dank like cat litter.  Then again, Nanaimo is on an island right next to a really large body of water so I suppose high humidity is to be expected.  The smell didn’t bother the dogs and they all piled on the bed to go to sleep.

The Trans-Canada Highway 1 will take you through both parks.

Both parks have ample opportunities for hiking with a number of interpretive trails.  Glacier also has a series of limestone caves that can be accessed with permission from Parks Canada.

Many of the facilities in Mount Revelstoke are not open during the winter, however the park is open for skiing and snowshoeing December to April.

8 response to "Down Came the Rain"