We Left the Prince for an Island 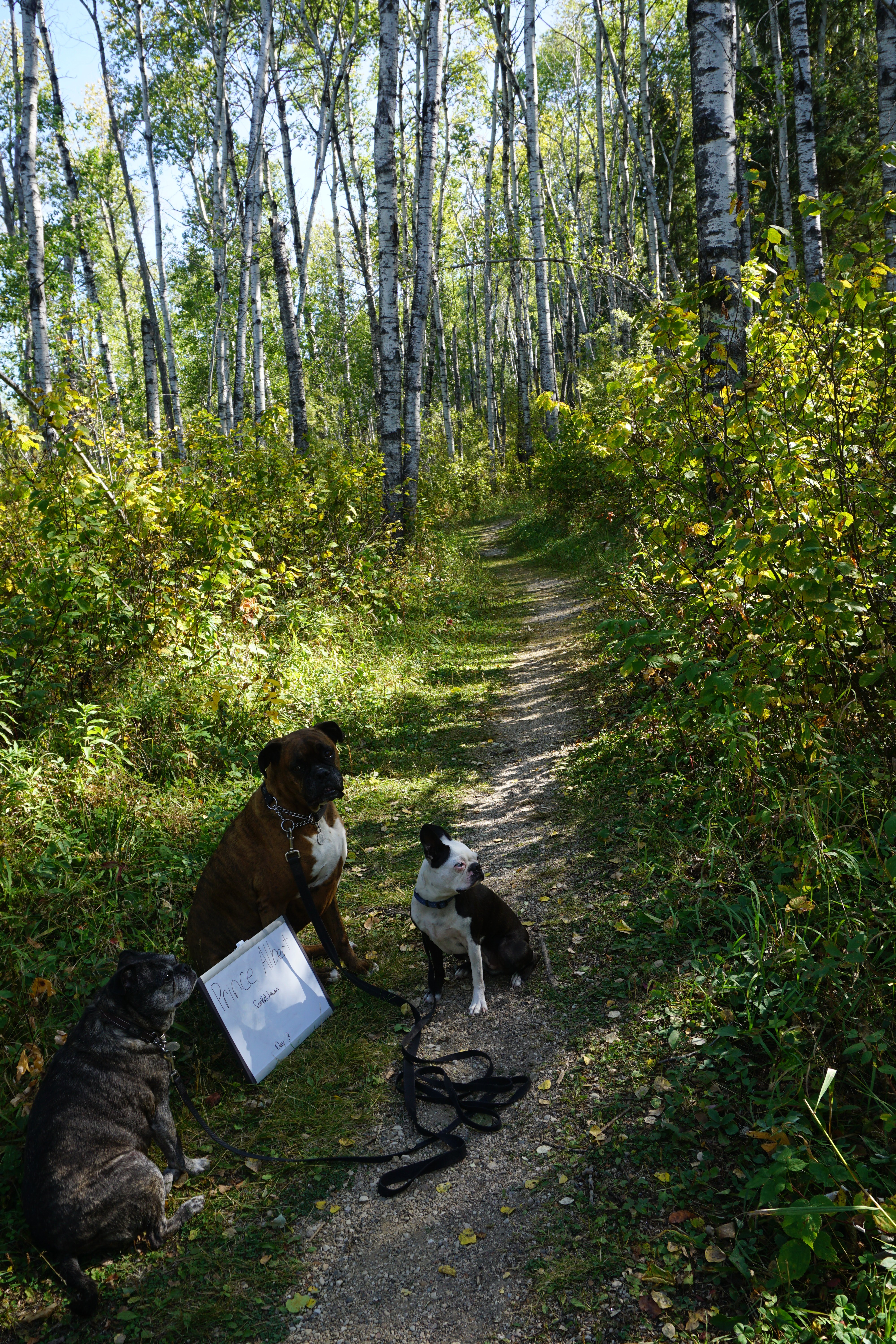 I was thankful that our neighbours were much less boisterous than they had been the night before.  In fact, had it not been for their vehicles, I would have thought they had left.  Which is fine by me because I am not a morning person.  At all.

I packed up our gear and loaded the dogs back into the car to make the long drive from our campground.  We passed several signs for beaches and when I saw one that didn’t have any vehicles in the lot, I parked and brought the dogs out for a quick morning dip.  Once they were thoroughly saturated (and Piper’s leg iced of course), they climbed back into the car and we continued towards Waskesiu for breakfast.

We were approaching the edge of town when I saw something large in the road ahead of us and slowed to watch an elk stroll across the road and then casually watch me watching her before I continued into town. 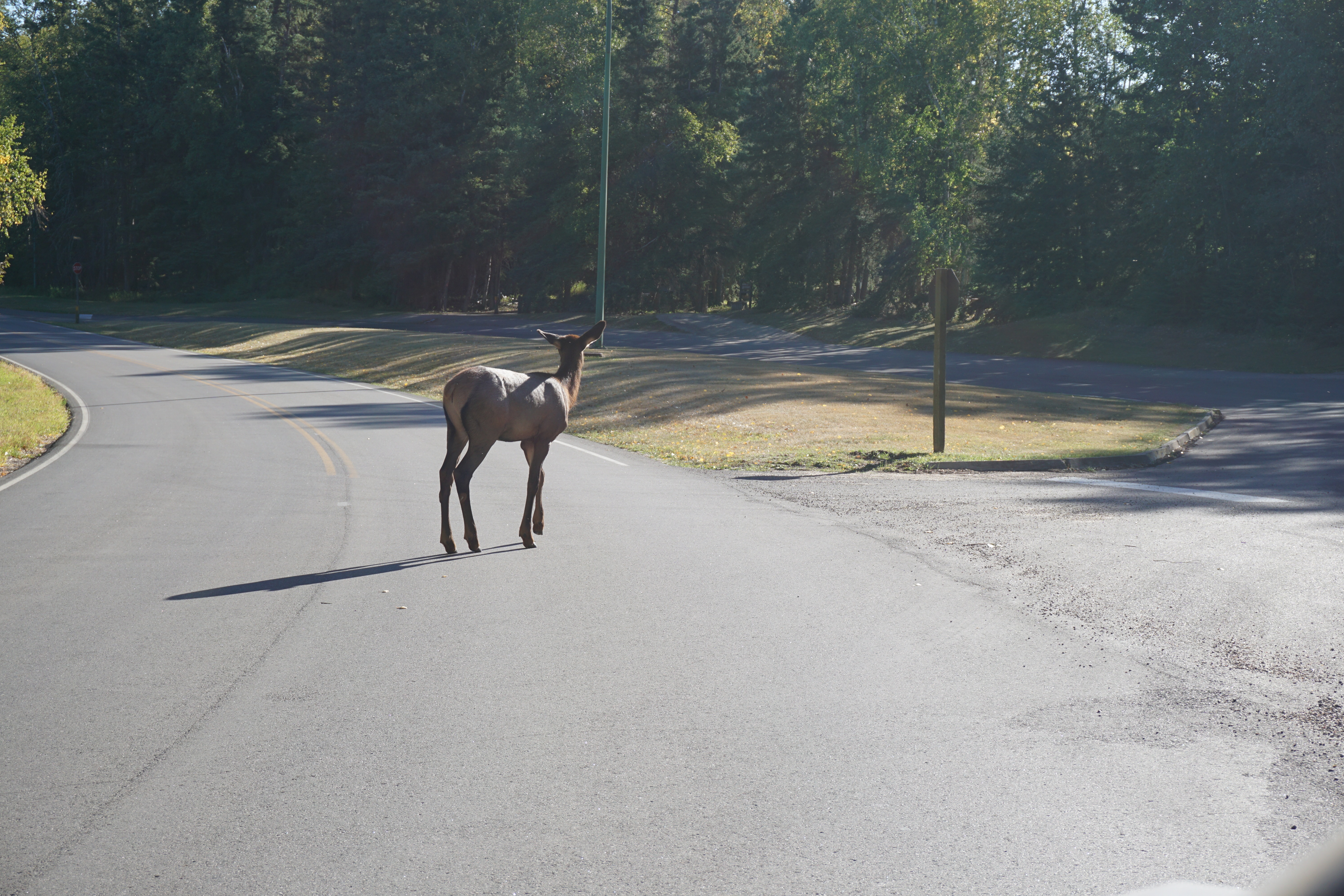 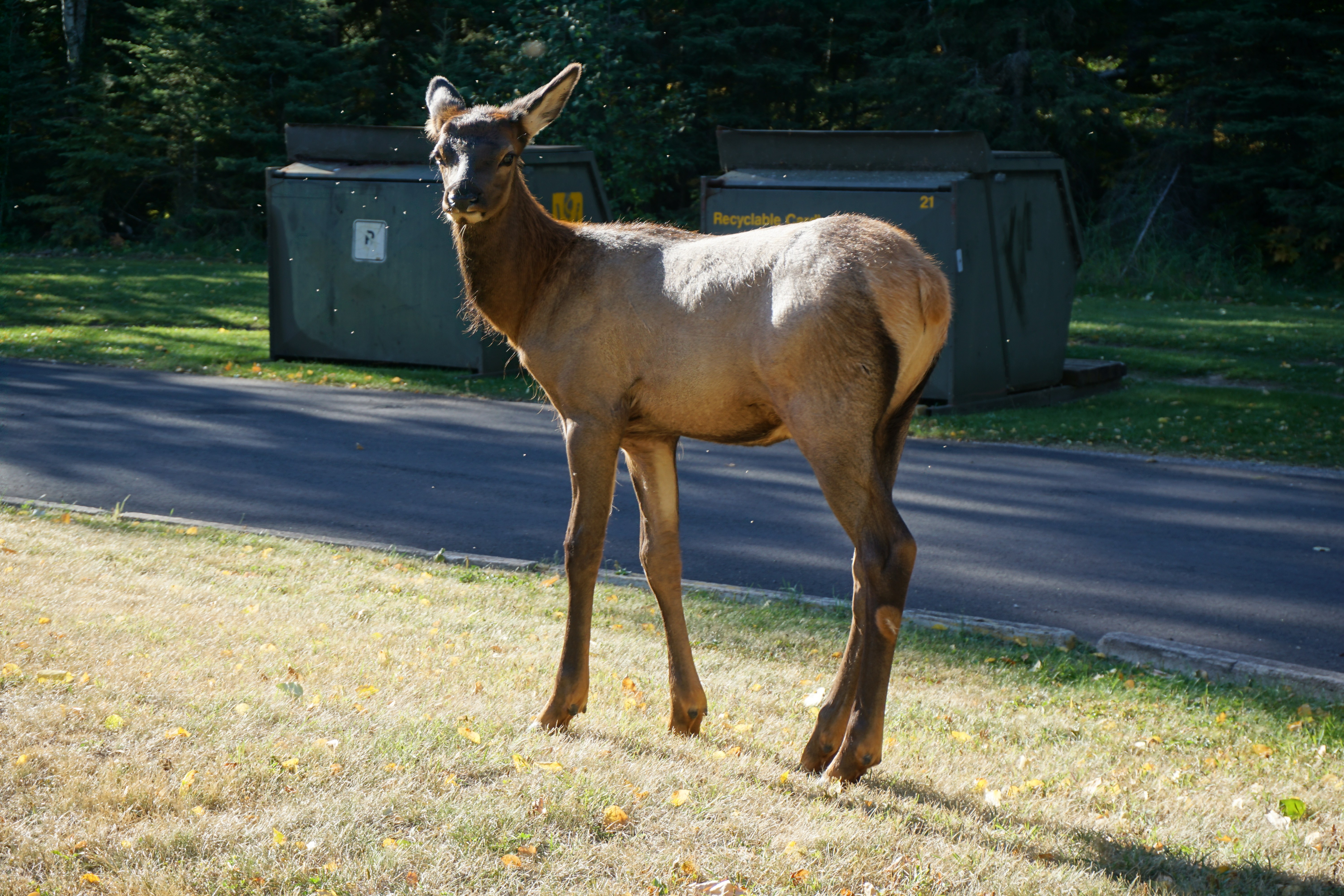 I stopped at the Trading Company, which was the first place I saw that had signs for a bakery and coffee.  It was not quite what I expected when I walked in as it was more of a general store but with a name like “Trading Company” that makes sense.  I ordered a coffee, a cinnamon roll (it was there so I had to have one), and something called “Dave’s Dog” which was a hot dog wrapped in dough and topped with cheese and barbecue sauce. We sat at one of the many tables outside so that we could take a moment to enjoy our food in a warm and sunny spot.  I had high hopes for the dog but I think it would have been much better hot and freshly baked.  The cinnamon roll was good in a different way from the ones at The Whitehouse Bakery the day before.  While the texture was not as light, the cinnamon flavour was much better.  If I could blend the two, well that would be as close to cinnamon roll perfection as it gets.  The coffee had caffeine.

Back on the road, we headed south out of the park, stopping at Spruce River Highlands Trail for a short hike.  We found a fire tower and I left the dogs at the bottom so I could run up the stairs to get a view from the top.  I thought that climbing up 15 metres (60 feet) would be too much for my two seniors to do.  Well they were not happy that I had left them and they certainly let me know it.  I can leave outside a restaurant and that’s fine but climb a fire tower and that’s a big deal.  The funny thing is that I kept up a steady chatter with them but I guess that’s not enough.  I knew that we wouldn’t be able to walk the entire trail as that would be pushing Piper’s legs but we did take a leisurely stroll before we turned around and went back to the car.

It was a relatively short drive, less than six hours, to get to Elk Island National Park in Alberta so rather than stop and try to find some place to eat, I continued to eat the fruit from Manitoba.

Once we got to Elk Island, I was a little confused since it’s a large park but only has one campground.  In fact, I was a little worried that the sites would all be taken since Elk Island is only about 45 minutes from Edmonton and it seemed like there was a fair amount of vehicular traffic.  Rather than explore the park as we drove, we made a beeline for the Astotin Campround.

It was when we drove over the Texas gate that I understood why there was only one campground: it had to be fenced off from the wildlife.  If the park was dotted with campgrounds, it would obviously be a huge expense but also disrupt the migration of the much larger inhabitants of the park.

There was a self-registration booth at the front gate to the campsite so I didn’t even have someone to recommend a site or the insider knowledge that I usually rely on.  I jumped back in the car to begin the site hunt, worried that I would find a good site but as I went looking for a better site someone else would take the good site that I saw first.  I do the same thing with parking spots; it’s just a me thing.

I needn’t have worried.  There were several sites available and during our second loop of the campground, I picked one that had a decent view and was close but not too close to the facilities.  It was quiet as I set up the tent with one older gentleman in the site next to me and another younger gentleman across from me.  I noticed that there was a large trailer in the site across from me and I was trying to figure out if he was there with someone else or if he travels a lot and likes the comfort.  Well that was answered soon enough when a woman walked up to him with two young children.  More on them later.

With site claimed, we dropped our payment off at the booth as we drove back the way we came to get some exploring done.  Our first stop was Bison Loop Road which is supposed to be the best place to go to watch the park’s plains bison.  We had had so much luck at other bison-viewing spots that I had my hopes up.  No bison.  I drove the loop twice just in case they decided to make an appearance and they didn’t.  One thing that I thought was a bit odd was that the park had two of the iconic red chairs just next to the road.  What makes that odd?  Two things: first is the fact that there are signs everywhere that say to stay in your vehicle and away from the bison so putting up some chairs seemed counterintuitive.  Second was the view because there wasn’t one.  Not quite sure what the logic was there.

Since I wasn’t about to take the dogs walking through a bison area, we stopped at Tawayik Lake.  Almost immediately adjacent to the parking lot is a bench at the edge of an open grassy area.  Signs tell of how Pope John Paul II came to visit the park in 1984 and when he came to that bench, he sat and enjoyed the quiet for a time.  I can understand why.  The whole area almost seemed as though it were muffled.  The only way I can describe it, is that it was as though someone had placed a large bowl over the marsh.  I also sat down to experience this calm.  There is something about that particular place that encourages meditation and reflection. Even the dogs seemed to feel it as they were content to sit next to me rather than sniff everything. 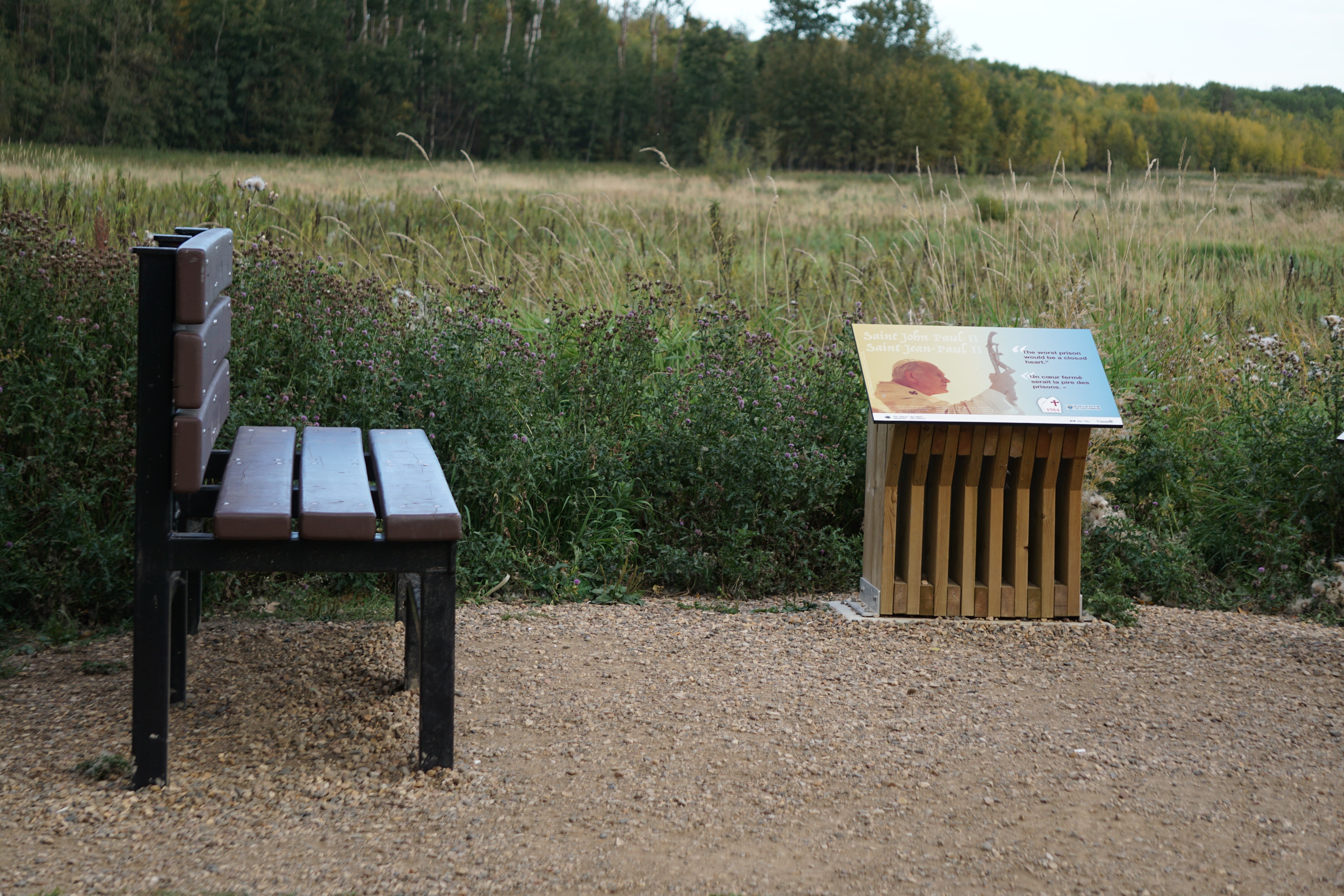 Finally we stood and walked down the trail before we turned around to go back to the car.  As we were leaving the lot, I happened to see a large bull elk go leaping into the trees.  So there are elk in Elk Island.

We never did get to see Tawayik Lake so the dogs didn’t get a chance to go for another swim but we did stop for another short walk.  I mean, when you see a sign for Hayburger Trail, you have to check it out.  Let’s face it: I just like anything with Burger in the name.  There was A LOT of fairly fresh-looking, and large, scat on the trail so we didn’t go too far especially since it was starting to get dark and I didn’t want to have to worry about what might be hiding in the trees and what might be on the road as we drove back to camp.

Then as we were about to drive down the road for our campground, we saw a large bison calmly grazing at the side of the road.  So there ARE bison here too.  After taking a ton of photos, I went to the cafe at the golf course to see about food.  Yes this is another park with a golf course.  Wouldn’t you know it: missed dinner.  No worries, by this point I was a pro when it came to ramen noodles. 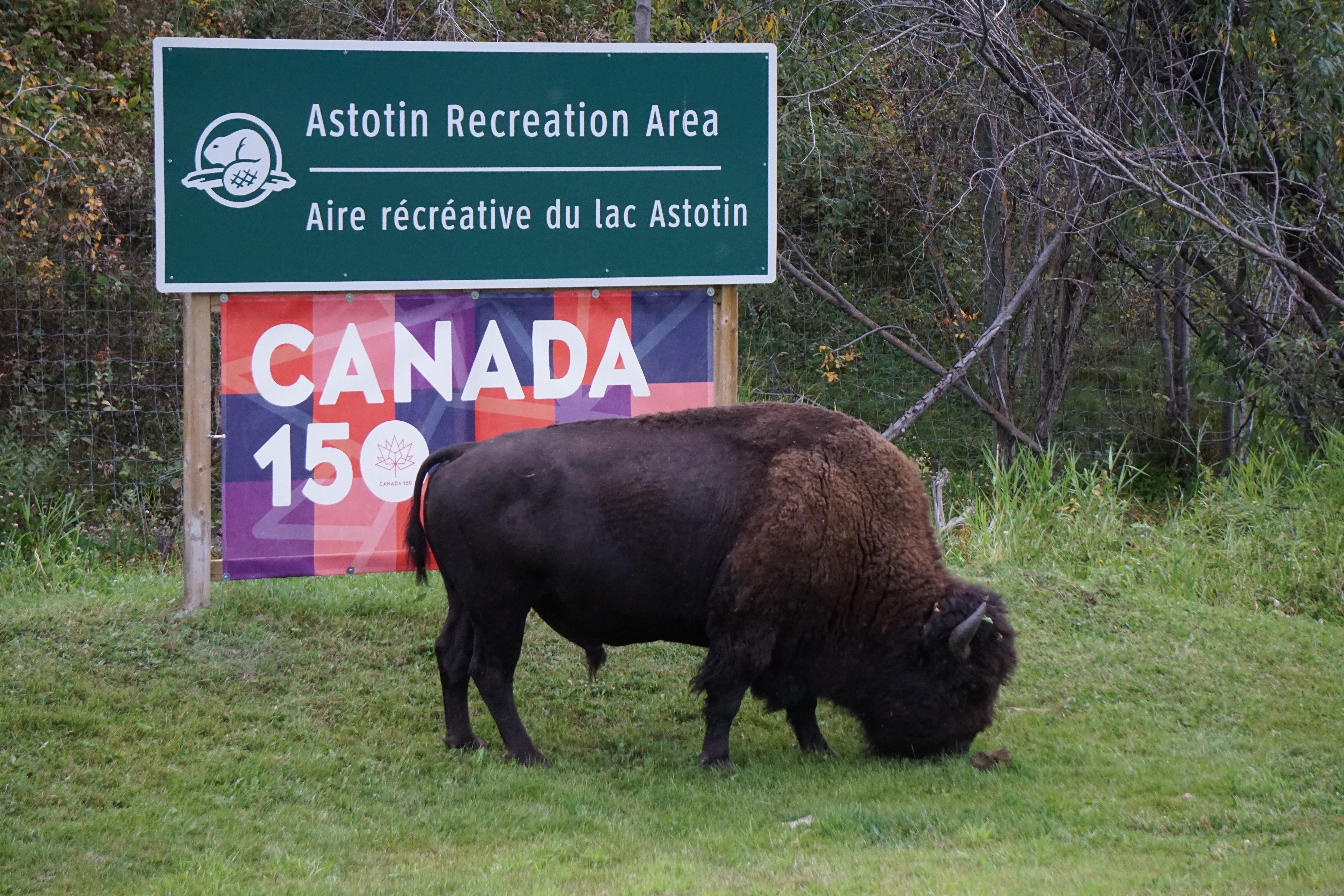 As I set my little kitchen up, I was treated to the ear piercing shrieks of one of the young children across from my site having a veritable meltdown.  How anything that small can make sounds like that is beyond me.  What made it worse was the fact that I had to be up really early the next as we had some serious ground to cover.  Finally, quiet prevailed and the only sound was the snoring of the dogs around me.

Highway 16, Yellowhead Highway and part of the Transcanada Highway, runs east/west through the park and the Elk Island Parkway is the only road that runs north/south off Highway 16.  Edmonton is the nearest city with an international airport.

There are plenty of trails for hiking, skiing, and snowshoeing.  There is even one of the longer trails that is paved, making it suitable for wheelchairs and strollers, although there are some sections that may be a bit steep.

Mountain biking is allowed but can be dangerous since there are so many large animals in the park.

Boats can be rented at Astotin Lake which is the largest of the lakes in the park.  The park is known for it’s many birding opportunities because of it’s mix of wet and dry ecosystems.

And of course, there is a golf course.

There is a cafe at the golf course but since I missed it, I can’t make any statements about the food.  With Edmonton less than an hour’s drive, there are plenty of food opportunities outside of the park.