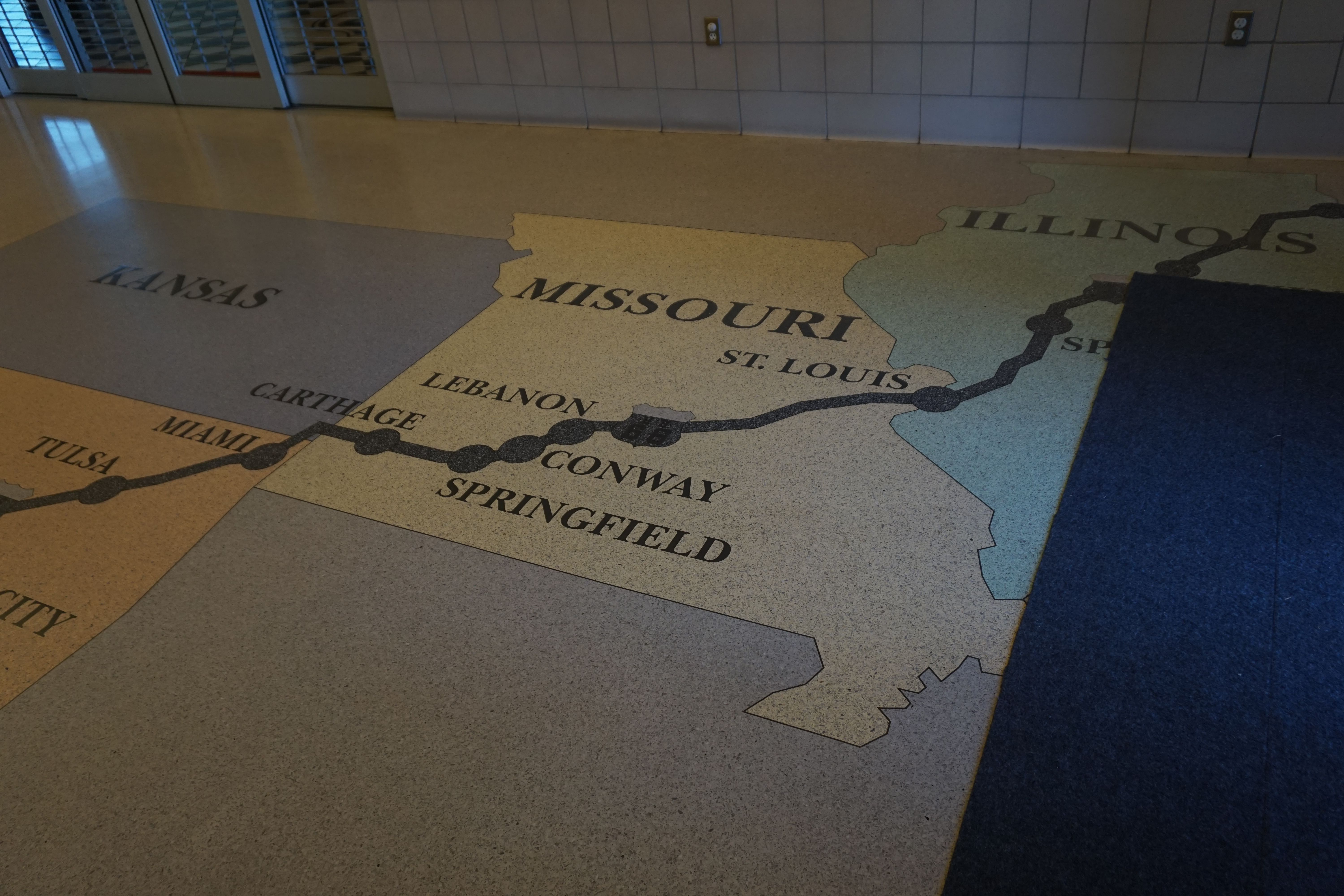 Remarkably, when I woke up the next morning, I wasn’t hungry at all.  I took the dogs to walk in an open area next to the motel and went in search of caffeine.  I found Mother Road Coffee and instantly fell in love with the place.  When I stepped up and ordered a cortado and americano, the staff actually knew what I wanted.  This just keeps getting better.  Then as I was flipping through a photo book about Route 66, I heard someone asking if I ordered the cortado.  The next words out of her mouth were “I’m sorry we don’t have any clean glasses”.  I think she saw my heart breaking in front of her because she started rummaging through cabinets and going in and out of the kitchen.  I tried telling her not to worry as I was happy to stick with the americano but she wouldn’t hear any of it.  Next thing I knew, a desert dish was being placed on the counter in front of me, filled with creamy coffee goodness.  Wow.  Everything about this place was incredible and the super-sized cortado was amazing.  Actually, the town itself was pretty neat and if we ever end up in the area, it will be worth exploring more.

Properly caffeinated (or maybe over-caffeinated), we continued on.  We found a rest area that was one of the coolest I have ever seen.  The picnic tables in the back of the property were covered and designed to look like businesses.  Ever better was the floor inside restroom building: it had a map of Route 66 in the floor.  The map was so large that I couldn’t fit the whole thing in one photo. 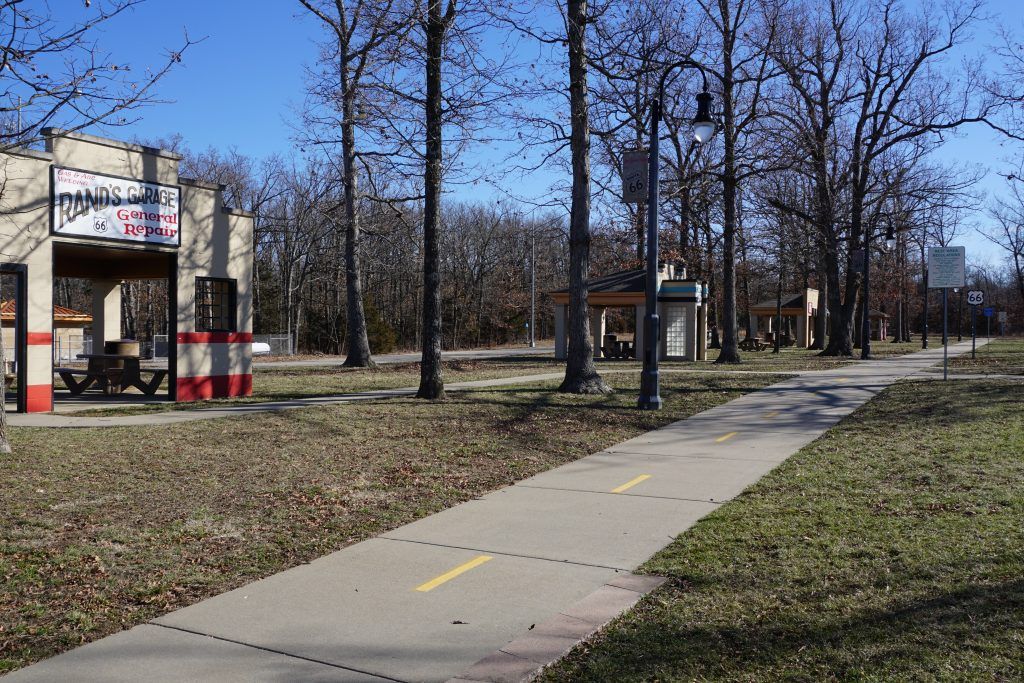 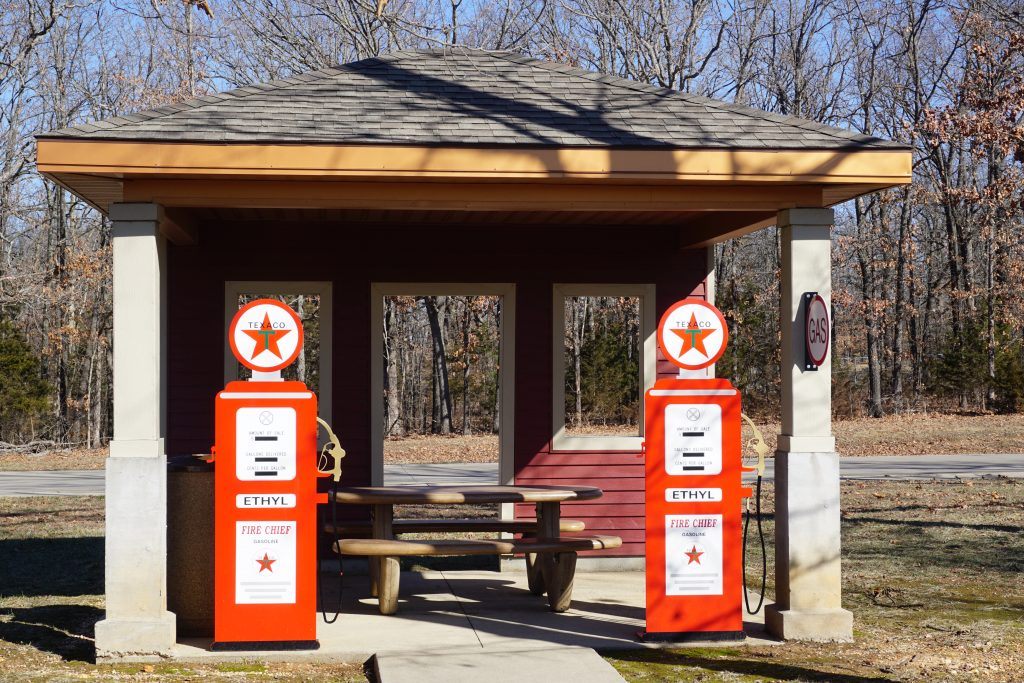 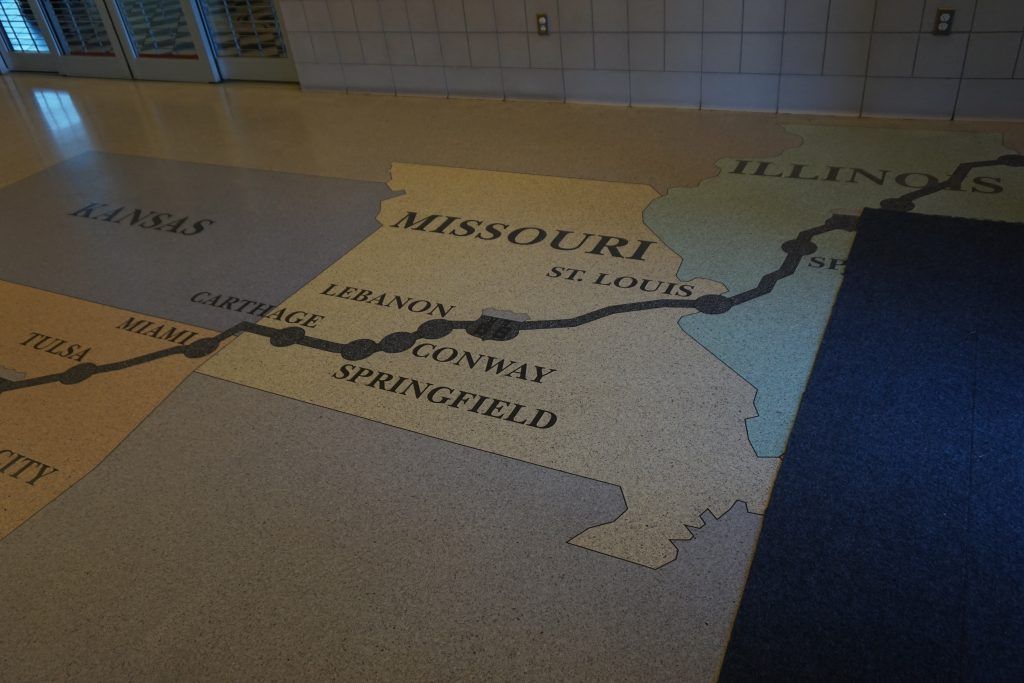 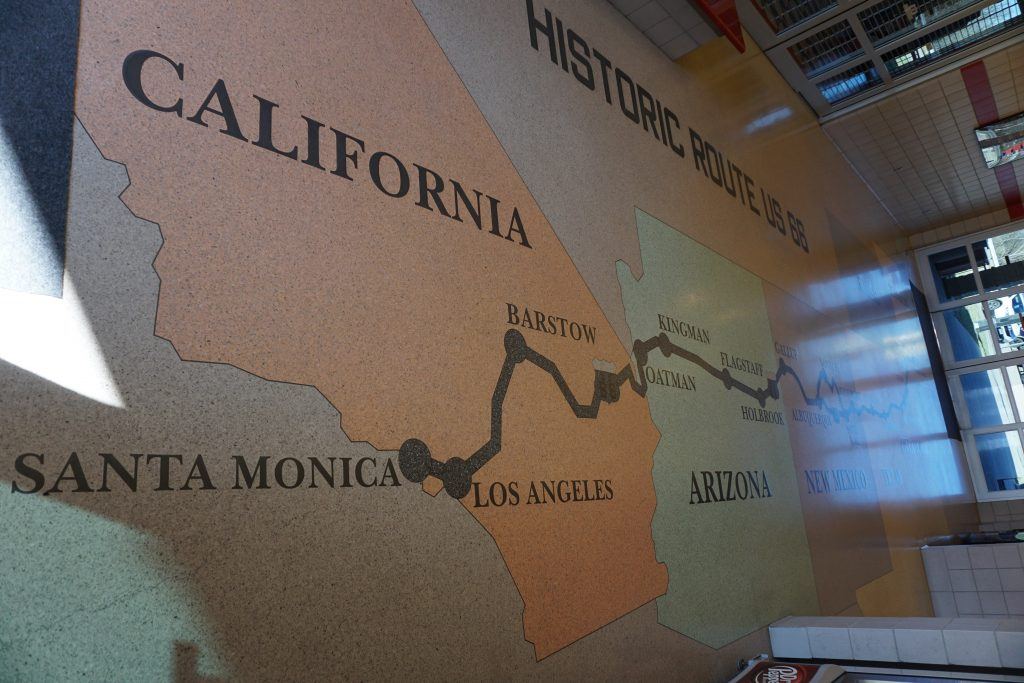 It was getting close to noon when I realized I needed something to eat and we found a place in Rolla, Missouri: Rob & Kricket’s Tater Patch.  I’ll admit that it was the sign proclaiming that it had been in business for 50 years that won me over.  A quick chat with the woman at the bar and I soon left with a pork tenderloin sandwich and fries.  When I took my container outside to sit with the dogs, I was floored when I opened it up.  The tenderloin was massive!  I literally folded it over and it still hung over the bun.  With the fries, I was stuffed to the gills.  Again.

I was tempted to stop in St. Louis on the way through but the thought of eating donuts made me feel like I was going to explode….err I mean, time was getting short and we had a stop to make before we got home.  That sounds better.

When we had passed through Illinois the first time, I had tried to visit Starved Rock State Park but the rain had been falling so it didn’t happen.  Since we were passing close by and there was no rain this time, there was no reason not to stop.  The fact that it has been voted a top attraction in Illinois meant that there was no way could pass it by.

As soon as I drove in, I realized that we weren’t going to be seeing the full park, partly because we had arrived mid-afternoon but also because all the low-lying areas had been blocked off due to flooding.  Even the parking lot for the visitor centre had been flooded.  We parked near the park resort and set out down one of the many trails.   In short order, we were picking our way along the top edge of a steep gorge.  There are lots of trails and maps to help you navigate the park.  In fact, I’d say there’s almost too many trails because it became confusing at some of the nexus points with a bunch of trails spidering off.  Having said that, if you take a few minutes to orient yourself, you’ll have no problem.  The trails are very well marked with plenty of stairs and boardwalks, making this is a place for people of all abilities to enjoy.

We took our time and climbed to the top of the namesake, Starved Rock.  According to the Starved Rock State Park website, the story of the name goes like this:

“The park derives its name from a Native American legend. In the 1760s,

Chief Pontiac of the Ottawa tribe, was attending a tribal council meeting.

At this council of the Illinois and the Pottawatomie, an Illinois-Peoria brave

After many days, the remaining Illinois died of starvation giving this historic

I don’t know if the legend is true but it does make for an interesting story.

We walked around the top of Starved Rock before taking a rest on one of the many benches looking out over the Illinois River.  It is a peaceful place to linger but the falling light meant that we had to get back out on the road.  We backtracked to the car, stopping to wander through the gorge that we had walked beside.  Piper and Leo were both eager to explore further while Jack just wanted to splash in the water.  It was too cold to go trudging upstream so we headed back to the car, pausing to admire several carvings around the parking lot. 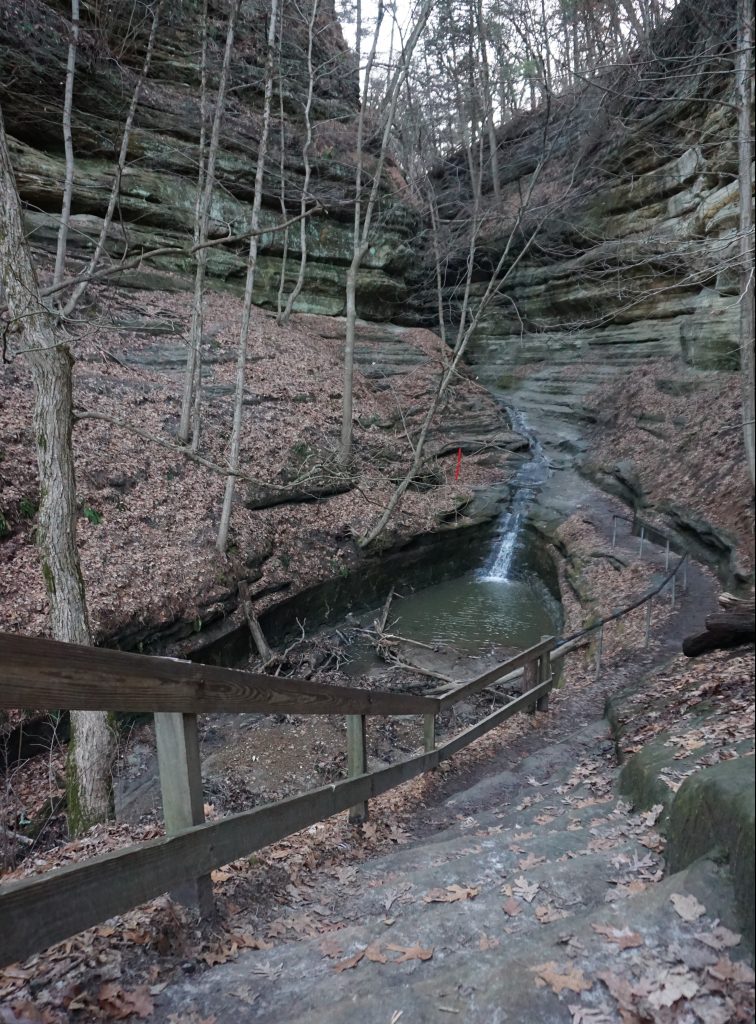 Back in the car, I decided to push on as far as I could before we had to stop for the night.  We were about a day’s drive from home and it always seems that the closer you get to where you’re going, the sooner you want to get there.  I wasn’t too terribly tired but when you drive through Michigan during the day, you see plenty of deer that get hit by cars and the last thing I wanted was to add another one to the side of the road so we stopped in Kalamazoo, Michigan.  I’ll admit that the name is one of the reasons; that is one of the best names for a city ever.  I checked in at the Red Roof Inn and as soon as the dogs got into the room, they jumped on the bed, and went to sleep.  Too stuffed from the Tater Patch to even think about food, I crawled into bed next to them to catch a few hours sleep before the final push home.

The next morning, I was again reminded that we were heading north as I scraped a thick layer of frost off all the windows.  I could think of no better way to regain feeling in my fingers than to go for a hot coffee…and donuts.  Sweetwater’s Donut Mill was a short drive away from the hotel and I was amazed to see that it had a 24 hour drive thru.  Now I’ve found that when something is offered 24 hours, there is usually a compromise between convenience and quality.  Sweetwater’s has figured out the balance because these were amazing donuts.  The steady line of customers also meant that there was high product turnover.  I bought a dozen donuts and then jumped back on the highway.

Construction on the bridge into Canada meant that I had lots of time to stare out at some blue girders until it was my turn at the border kiosk.  Just like the crossing into the United States, this one was remarkably uneventful.  Or maybe I’ve blocked it all out from memory.  Either way, we were soon making our way along the 401 towards Toronto.

Since I was going to be passing close to work and since the dogs love visiting the office, we stopped so that they could say hello to their fan club.  I left the donuts for my co-workers and listened to them curse me since they all agreed that these were some of the finest pieces of fried dough that they had ever had.  After a nice visit, I loaded the dogs back into the car and we finished the drive home.

I decided to do something a little different and make a video of our trip.  You can watch it here.  I’m exciting to know what you think of it so feel free to leave comments.

Missed out on the start of the trip?  Read from the beginning.