The Great (Lakes) Escape – Into the Great Wide Open 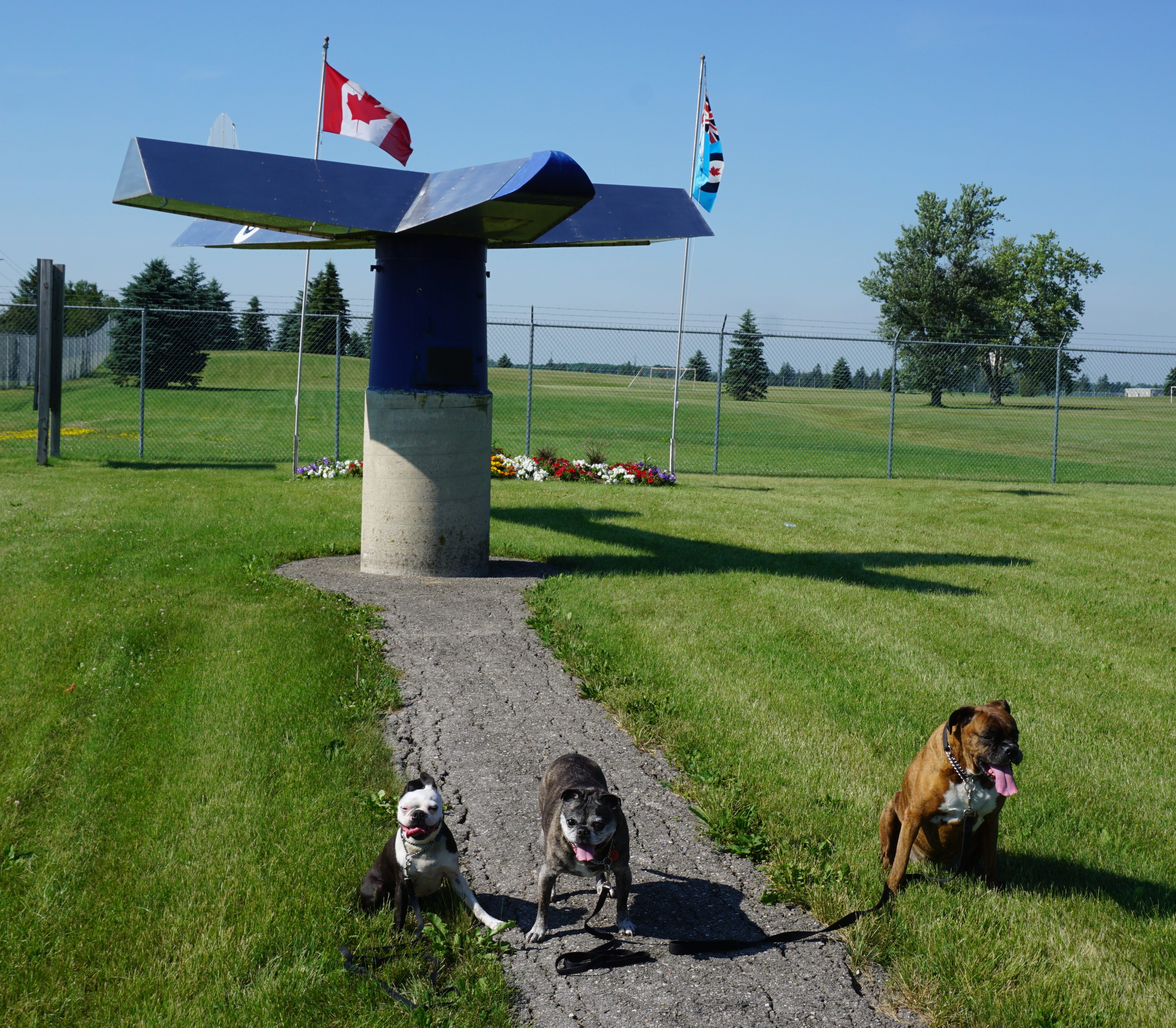 Eastern Canada and the United States were in the middle of a major heat wave when my next vacation rolled around.  The original plan was to embark on Leg Two of our Great Lakes Trip and travel Lake Ontario and Lake Erie.  I had some concerns about it with just how hot it was but when I looked at the weather maps, the heat was everywhere.

I was undecided about what we would do but I knew that I didn’t want to waste a vacation so we started by driving into Toronto.  I took the dogs to visit work which made everyone happy, especially the dogs.  They are always popular when we stop by.  Piper even knows when we’re getting close and will wake up out of a dead sleep and start whining until we get there.

When I loaded the dogs back into the car, I still hadn’t decided what I was going to do.  When I pulled out of the parking lot, I could either turn right and go south to Lake Ontario or turn left and drive back north.  Finally I made up my mind and we drove south towards the lake.  I thought that if we stay close to the water, we’ll have more cooling winds and be able to swim any time so that should help keep it pleasant for everyone.

Following the north shore of Lake Ontario, we drove west, stopping at Monastery Bakery & Deli in Oakville when I started to get a bit hungry.  Well it called itself a bakery but it was also a bustling grocery store with hot tables.  You even get free drip coffee while you’re browsing or order a proper espresso-based drink.  Not wanting to just choke down free coffee, I also bought a donut and apple fritter.  The fritter was really good and not super-sweet like so many can be.  It would have been nice to pick up a meal or fresh sandwich, but it was rammed with people so I ran in and out as quickly as I could.  I made it up to the dogs by bringing them out and sharing my fritter with them.

As much as I wanted to take long scenic drives along the north shore of Lake Ontario, unfortunately the urban development has turned the north and west side of the lake into one giant city.  Rather than fight my way through morning congestion, I took the Queen Elizabeth Way (also known as QEW) out of Toronto until we were close to the border crossing at Buffalo.  From there, we turned south to Lake Erie and after that, the pace slowed down considerably.

Fun fact: The Golden Horseshoe, which covers the area from Oshawa to Niagara Falls, is the most densely populated and industrialized region in Canada.

Our first stop was at Ridgeway Battlefield National Historic Site in Crystal Beach.  Since we were the only ones there, I let the dogs off leash to wander a little while I read the displays.  It was hot and the air had that thick humid feeling but the dogs still wanted to spend some time exploring.  One side of the lawn was completely walled in with blackberries and Leo and I set about having a little morning snack.  Leo has learned to pick blackberries and raspberries off the canes but strawberries are his absolute favourite.  He will walk along and graze on the little wild strawberries he finds on our walks.  Piper prefers to let me do all the work and pick her berries for her but she will also lay on her belly and crawl along for wild strawberries too.  Jack turns his nose up at them.  There’s always one that has to be different.  After a short walk and lots of water, the dogs jumped back into the car.

This part of Lake Erie doesn’t have a road next to the water so we ended up driving Highway 3 which is how we came to Dunnville on the Grand River.  When I saw Dunnville Wingfield Park, I hoped that I would find a place to let the dogs play in the river and we did.  Sort of.  It wasn’t ideal but it gave them a chance to splash and cool off at least.  Luckily my air conditioner works well so we were back in the car and back on the road. 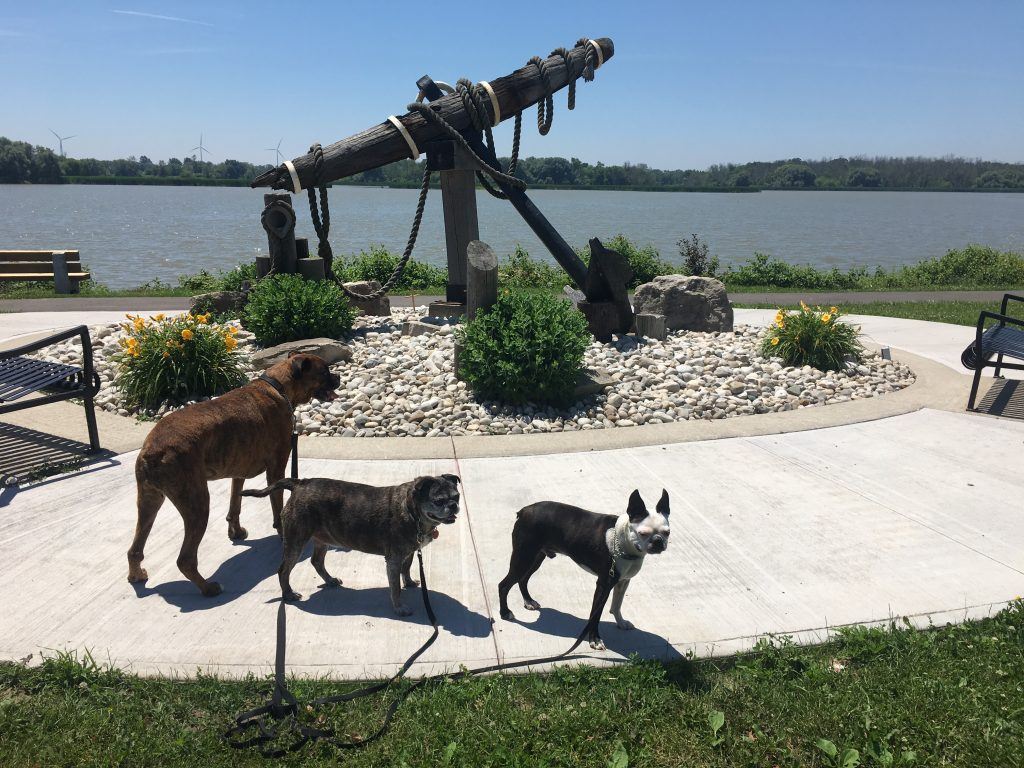 By this time I was getting hungry and we stopped at Sunflower Cafe in Selkirk.  It was much later than I usually eat so rather than a breakfast, I ordered a Reuben which is my all-time favourite sandwich.  There wasn’t much in the way of seating, so I had my meal on a bench in front of the restaurant.  For a small town, there was still a lot of traffic and with the restaurant at the main intersection, plenty of people got to ogle the dogs eying my food.  The sandwich was good but I wouldn’t order it again.  It may have been better inside on a proper plate and not balanced in a to go container on my lap with little noses poking at it.

We drove on west along country roads and then I saw a sign for Aylmer.  Now I know Aylmer for one thing and there was no way that we were going to pass by without stopping.  Aylmer is the home of the Ontario Police College and before that, the property was RCAF Station Aylmer.  Between 1941 and 1961, aircrew and ground support personnel were trained there.  I have made no secret of the fact that we are staunch supporters of first responders and I love planes so of course, we were going to make a slight detour.

Next to the Ontario Police College is the Aylmer Wildlife Management Area so we stopped there first.  There were so many birds around the feeders and ponds that there was no way I was going to let the dogs disturb them.  Fortunately there are viewing areas so we sat in there for a few minutes to watch the birds.  Then we drove next door and got a few pictures at the front of the property.  It would have been fun to poke around an old air force base but since we were there late on a Friday afternoon, the weekend exodus was in full swing.  That’s ok, we have a road to drive. 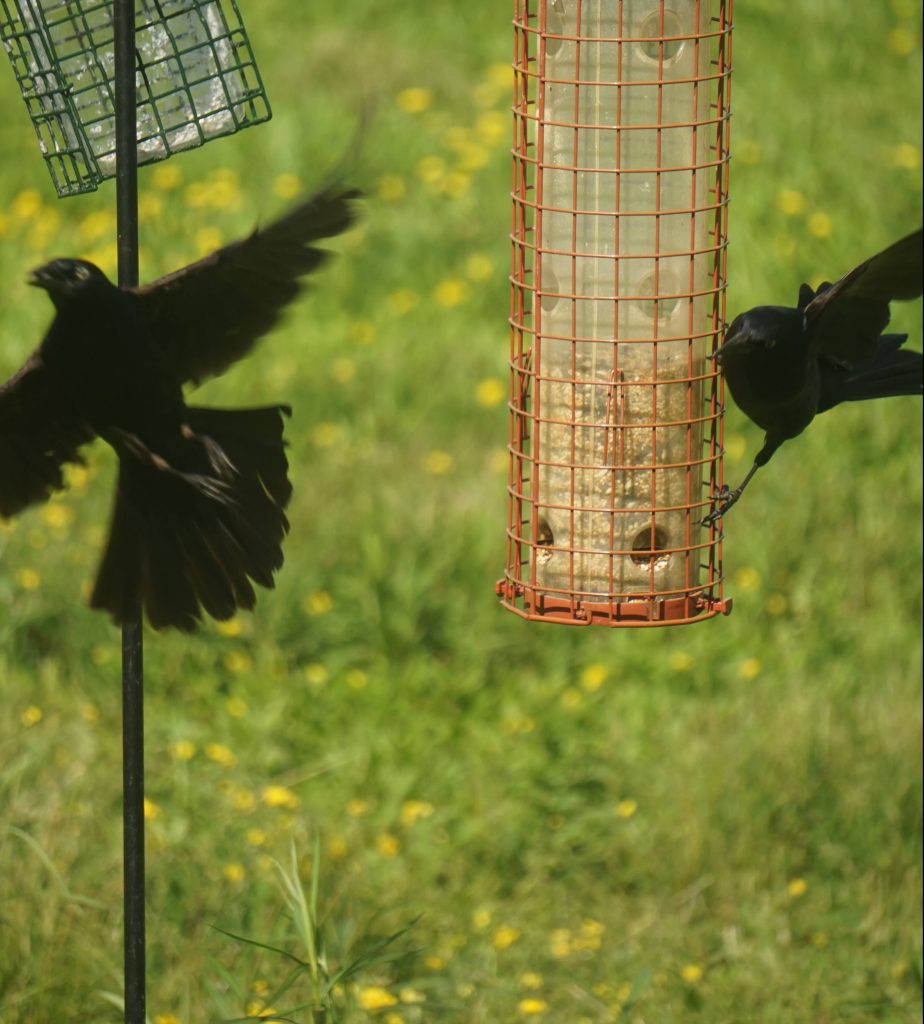 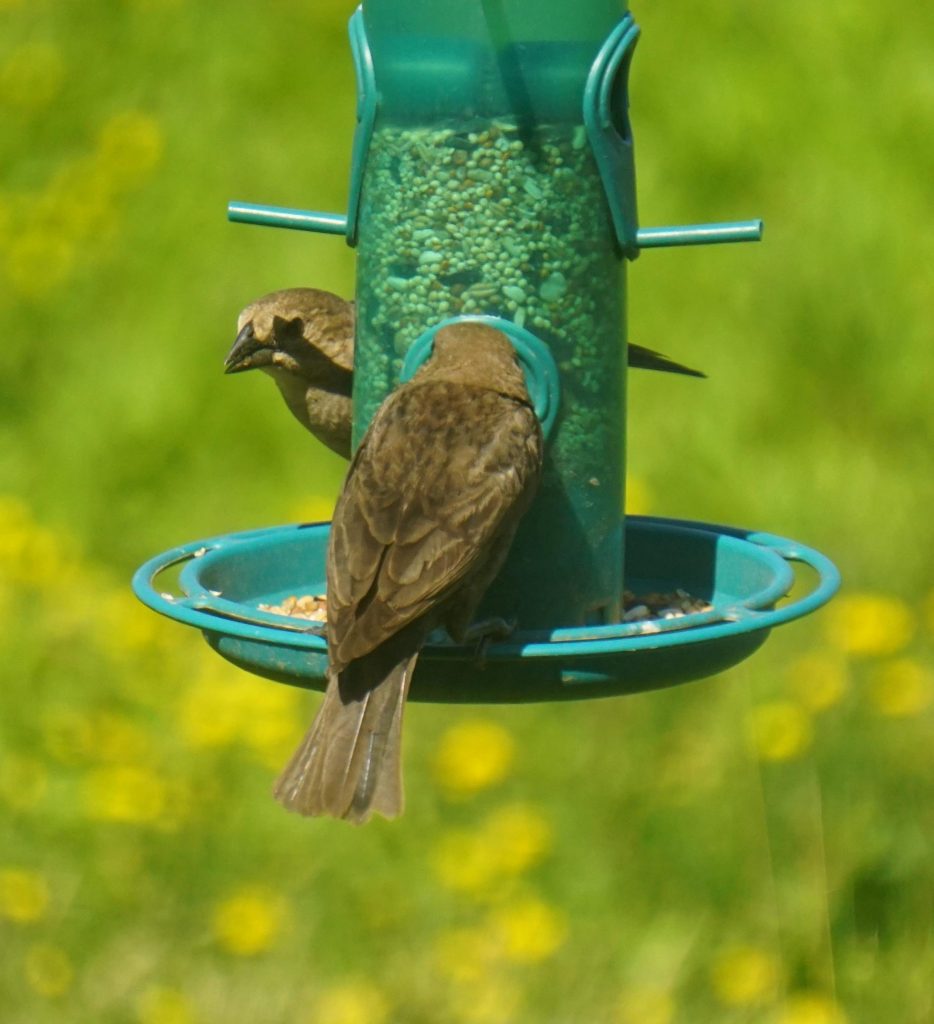 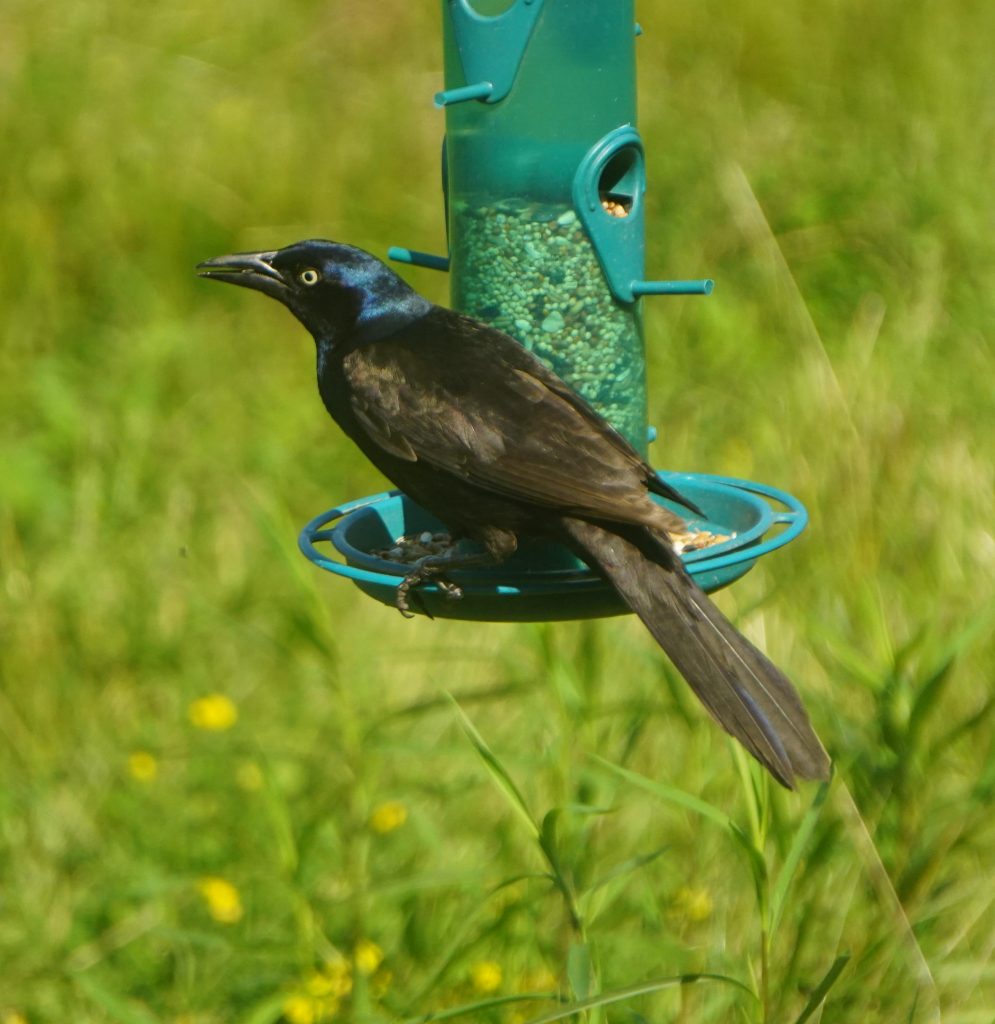 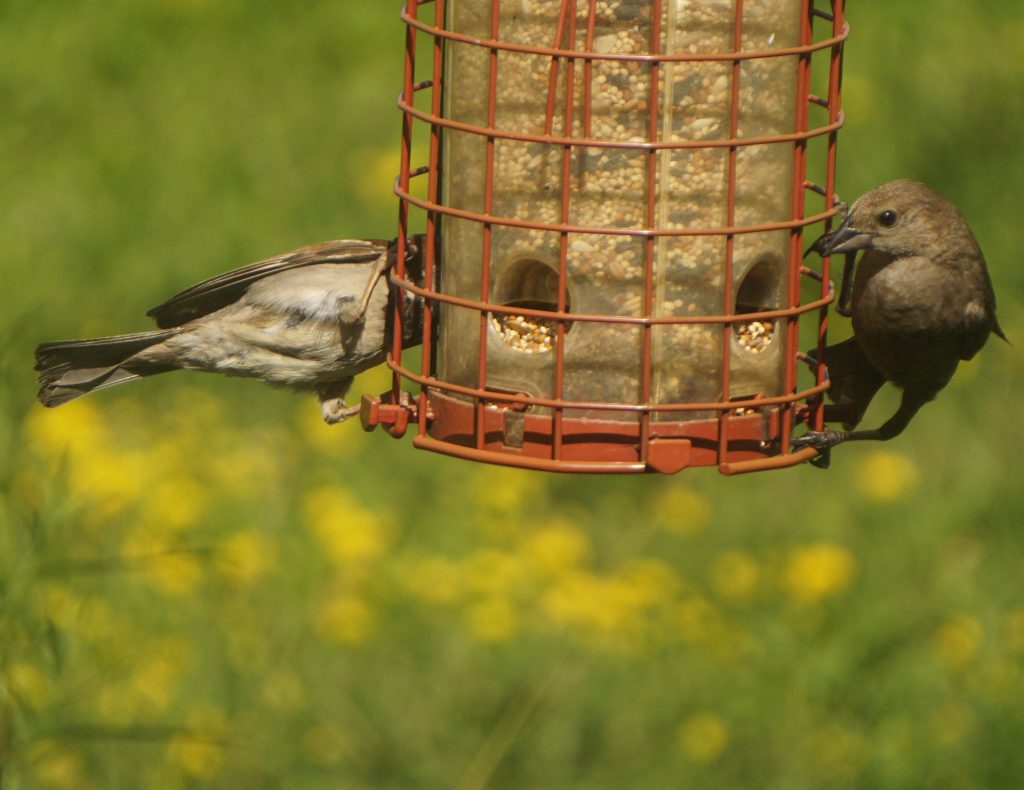 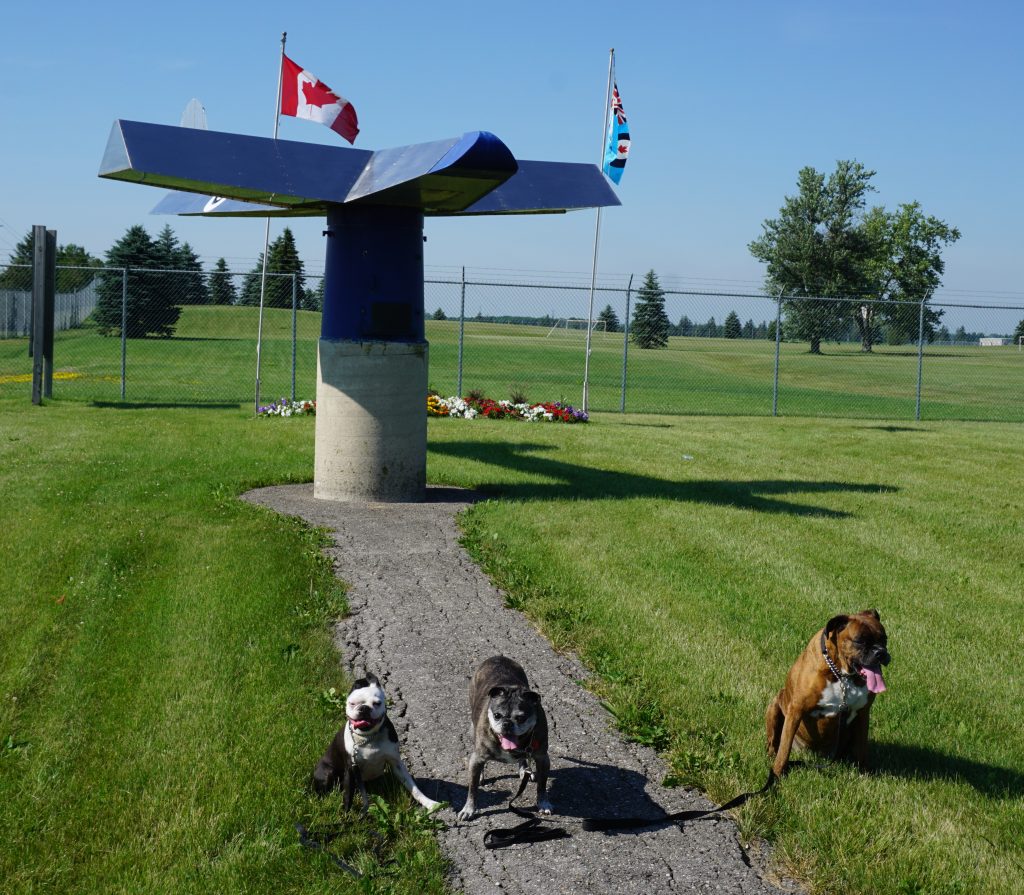 We were driving along some highway and I wanted to stop the car for a few minutes and just put my head back so when I saw a sign for a zoo and park, I thought that would be a perfect spot.  I saw trees to provide shade and lots of grass to let the dogs have a quick wander.  When I turned off the road, there was a toll booth right in front of me and a dirt track that veered off to the left.  I wasn’t about to pay for anything, so I turned to the left to see if there was a place to park.  Well I must have sparked some kind of panic because I saw the young woman at the booth leap to her feet with a radio in hand and as I drove along the track, I realized this was all private property.  Then I kept going to try and find a place to turn around without driving all over the grass.  I looked into the rearview and saw a golf cart barrelling as fast as a golf cart can down a rutted track behind me.  I’m not sure why but for some reason, Ride of the Valkyries popped into my head.  Eventually I was able to turn the car around and drove back towards the exit.  As I approached the man in the golf cart, I gave him a big wave and smile and watched his expression turn to confusion as I drove past.  No harm no foul.  When I turned back onto the highway I realized that being pursued by a golf cart had woken me up enough to drive on.

I kept going until we reached Wheatley Provincial Park.  I had never been to this campground before so I wasn’t quite sure what to expect.  I was looking at the sites available and one of the workers had remarked that spot 34 at Boosey Lake was a great spot.  First of all, Boosey Lake?  Of course I want that campground.  Second, when the staff tell you it’s a good site, it’s going to be a good site.  I was happy to see that the even though it was the middle of summer, there were still plenty of sites available.  Then we arrived at ours.  Wow!

I’m not sure what I noticed first: that our site was massive or that it was right on the water.  It had been marked as a premium site and cost a little bit more but it was an expense that was well worth it.

I got the dogs out of the car and was setting up camp when I heard a rustling behind me.  I turned and watched a raccoon saunter along the back of the site.  I could not believe how brazen it was to waddle through with not a care in the world.  Then I looked at my dogs passed out on their blanket and could not believe that they didn’t even budge.  Great guard dogs I have (that’s total sarcasm there).  Not that I want to deal with a bunch of barking dogs but come on guys. 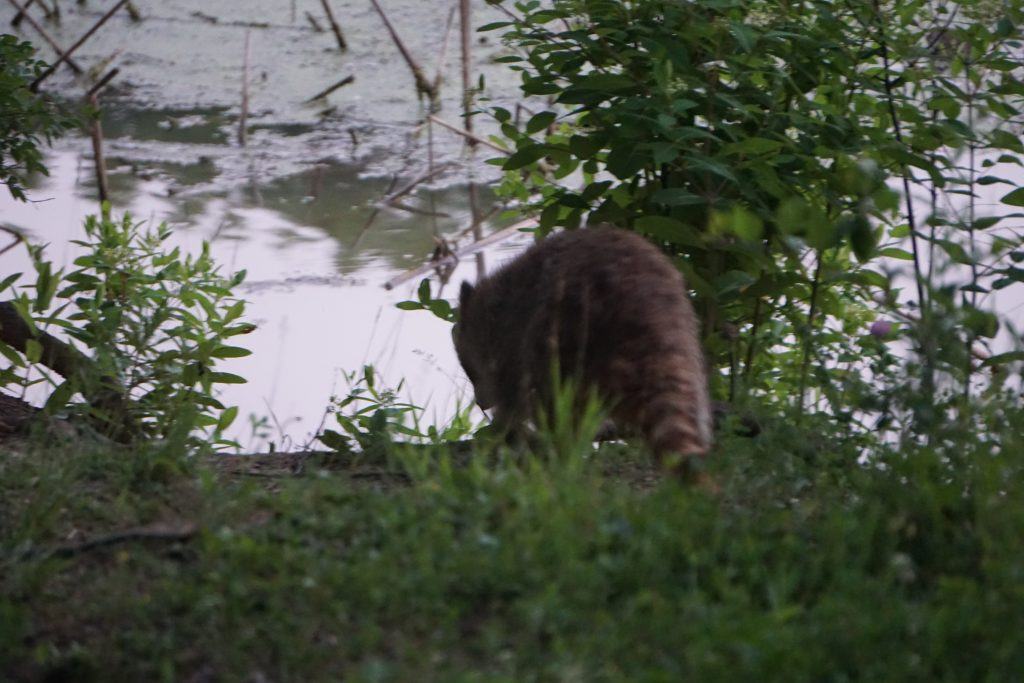 I prepared a meal of ramen noodles as I sipped on my vodka.  Dillon’s seemed appropriate since it’s a Niagara- based distillery and we literally drove by it on the QEW.  Given how close we were to water, I would have expected that we would have been eaten alive by mosquitoes but there were hardly any which just made the spot even more perfect.  We climbed into the tent while it was still light out and fell asleep to the sounds of fish jumping in the lake and loons calling.

If you missed the start of the first leg of our Great Lakes adventure, start the journey here.