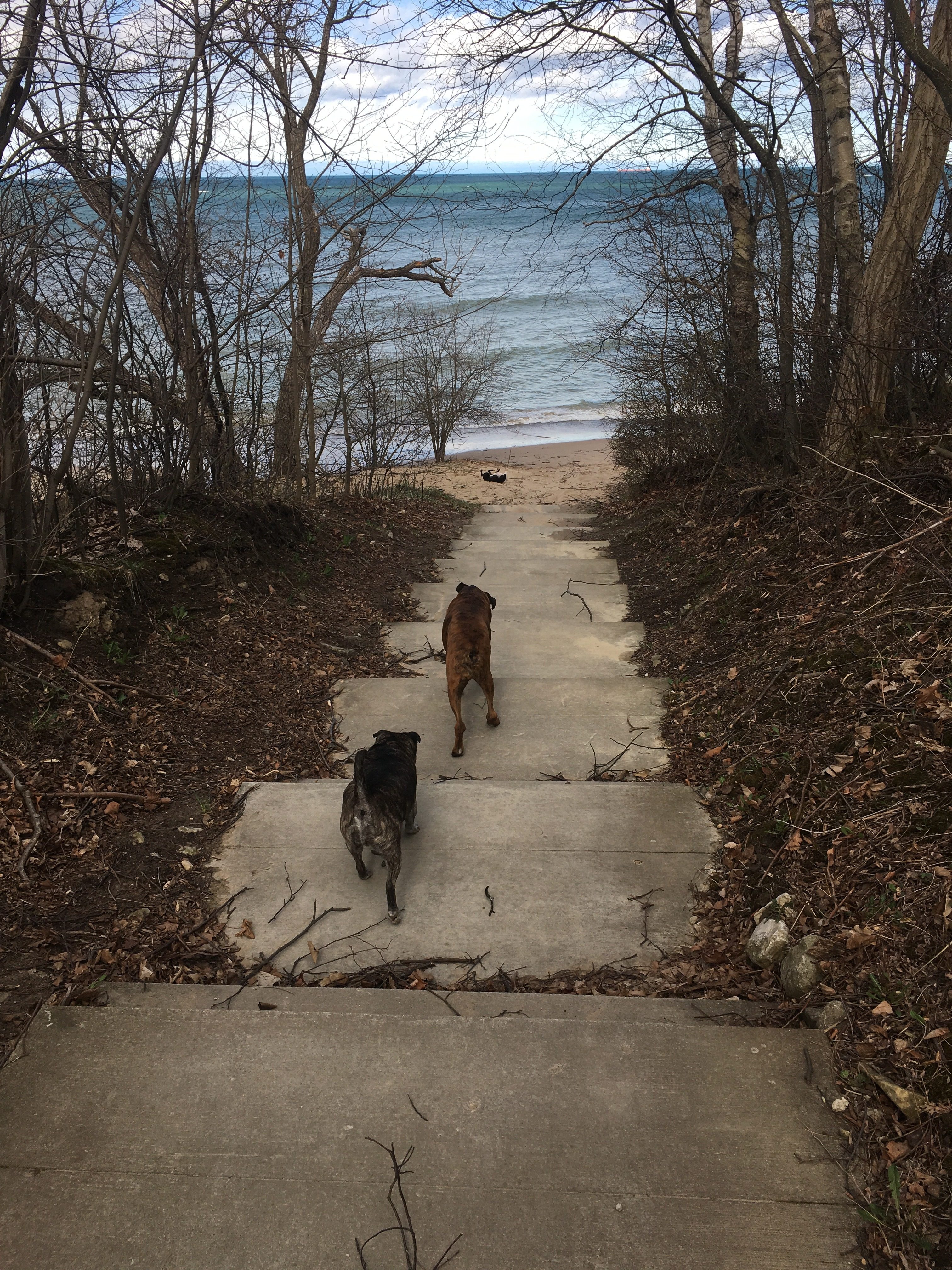 The dogs love water.  I love water.  So rather than drive for two days to get to an ocean, I decided we would have a Great Lakes tour.  It would also be easy to divide the trip up should the need arise because of bad weather or creaky bones.

I had packed the majority of our things the night before we left for the first segment, listening to the constant tapping of Piper’s feet and whining from Leo as stoic Jack watched on.  Good; they still like road trips.  A lot.

On May 4, 2018 (May the Fourth be With You) we set out on the first leg of our trip at 5:01 am after I gave up on the dogs eating their breakfast.  The rain did not dampen the enthusiasm of my travel companions who practically grew opposable thumbs so that they could open the car doors themselves.  I had decided to hold off on my morning coffee until we made our first stop in Orillia as a friend had told me I had to go to Mariposa Market.  Never one to turn down a bakery, naturally we stopped there.  The problem was that we were at the bakery before the bakery was ready so I took advantage of a slight break in the rain to walk the dogs along the shore of Lake Couchiching.  Our first lake of the trip wasn’t one of the great ones but it would be a really nice place when you’re not getting drenched.

Having wasted enough time, we drove to Mariposa Market.  It was not quite what I had expected.  There were baked goods aplenty and lots of sandwiches and salads but what I had wanted was something traditional like a fried egg, bacon, and cheese on a bagel.  They didn’t have that.  So I consoled myself with an americano (tasty), toasted everything bagel with butter (so good), and a sticky bun (hence the consoling part).  I crushed the bagel as soon as I got back to the car and set to work on the americano.  I decided that I would wait until later to have the sticky bun.  Yup later.  Five minutes is later enough.  It was a good sticky bun.  Too bad it didn’t make it out of Orillia.

Needing to wipe the sticky off my hands, we stopped at Northwinds Beach just outside of Collingwood.  It’s a nice little spot to let the dogs run and we’ve made it a regular part of the trip whenever we’re passing through. 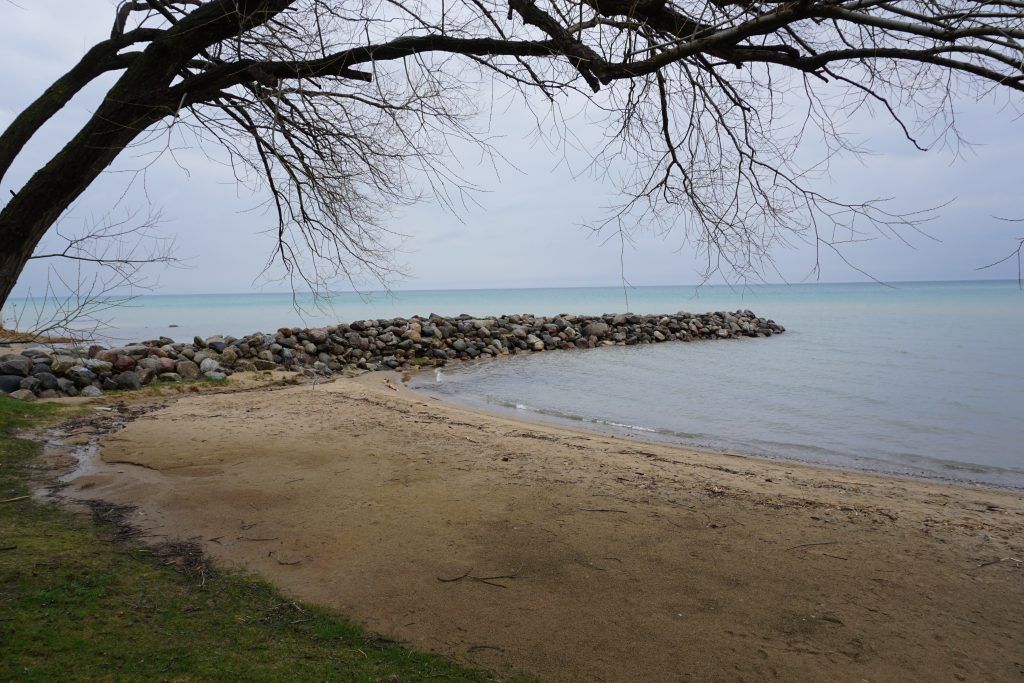 After the beach, we stumbled across Moreau Dog Park in the town of Thornbury.  Even though the dogs had already had a few chances to get some exercise, I figured we’d check out the park.  It’s a large fenced area and that’s about it.  It’s better than nothing and better than some other parks we’ve been to but not the best by far.  Still, with three dogs of varying energy and fitness levels, I’ll visit every park I can.

Fun Fact:  Lake Huron is the fourth largest lake in the world and second largest of great lakes.

Our first stop on Lake Huron was the town of Kincardine.  Partly to visit to Bean’s Bistro for coffee and partly to check out a town with very obvious Scottish roots.  With caffeine levels returning to normal, we followed the signs to the water.  Southern Ontario was experiencing severe winds at the time and the water was being thrown up against the breakwater.  After a short walk in the exfoliating sand being blasted around, we climbed back into the car and continued south.

We weren’t in the car for very long before we saw Kindog Dog Park.  This park had what Moreau Dog Park lacked: there was a small copse of trees with trails running through it so it was like a mini forest.  It gave the dogs much more stimulation and they sniffed their way around the park.  Once we had done a lap, I loaded the dogs up and we continued on.

Our next stop was Goderich and we were treated to the stunning blue water that we had missed in Kincardine.  If I had stood on the beach and looked out, I could have sworn I was on a beach in the Caribbean.  As we made our way along the shore on Cove Road, we found signs for a dog run area.  Well this was our lucky day!  I can’t think of any other trip when we have found so many places for the dogs to run off-leash so close together.  The path for the dog run is at the top of a bluff and fortunately Jack was content to stay at the top rather than try and get into the water like he usually does.  We found a spot where we could safely make our way down to the water and they all waded in.  The water was still rough and they were happy with a quick dip.

Fun Fact:  Goderich Mine is the largest salt mine in the world and part of it runs under Lake Huron.

Safely back in the car, we continued on until we saw the sign for I’m Starv’n Roadhouse.  Well sign, now that you mention it, I too am starv’n.  After a quick conversation with the staff inside, I soon found myself carrying a junk burger with fries.  They don’t have a proper patio but plenty of picnic tables outside meant that the dogs could sit with me and watch me eat.  It was a good burger with bacon, cheese, fried onions…everything a road trip warrior needs to stay fuelled.  And yes the dogs shared with me.

After we left, I was looking for a gas station that was listed on Gas Buddy as having cheap gas.  I was driving merrily along until I realized that I must have missed it.  Okay we’ll just turn around down here…where the H*%* did the road go??  The road ended at the lake.  Not in a parking lot, not in a turn around.  At.  The.  Lake.  Needless to say, I had to check this out.  I knew the wind was strong because even though I had parked next to a sandbank, I could still feel the car shake.  I left the dogs in the car and popped down to the shore where I was almost blown over.  Not figuratively blown over; I actually had to catch myself when the wind gusted.  A few quick photos and I hustled back to the car and went to look for the gas station.  I had passed it (insert face palm here).

Then came my favourite part of any trip: the border crossing.  I waited in line and went through the checklist: passport at the ready, dog’s papers in their envelope, “I’m following the Great Lakes”, “I’m on vacation”, “I have to be home by the 13th at the latest”.  Okay I got this (that last part was in my head).  I had never crossed at Sarnia before so this was going to be interesting.

I pulled up to the booth and everything was going well at first.  Then I got thrown a curveball: “Is the dog food in it’s original packaging?”

“Where was it made?”

(Seriously?  Are you freaking kidding me?)  “Canada.  I think.  Yeah Canada.” (And in case you’re wondering, I’m A positive and like long walks on the beach.)

Finally I was waved on and we crossed into Michigan.  Whew.  We made it.  It felt like we had been in the car forever, or maybe it was just that my tummy was still full of burger, so when I saw a sign for Four-Mile Scenic Turn-out, well we turned out.  There was a set of stairs at the far end of the lot that gave easy access to the water.  When I saw that no one was around, I unclipped the dogs and followed behind as they dashed to the water.

They were drinking and rolling and having fun and then I noticed Jack running at full speed down the beach.  I called out for him but those little legs were going full tilt.  Here’s the thing: Jack is almost completely blind.  He can see about six feet in front of him but anything farther away is a problem.  When he thinks he’s lost me, he starts running to where he thinks I’ll be.  So I set off running down the beach after him.  Piper and Leo thought this was a great game as we all Baywatched after Jack.  I caught up to Jack and he looks up at me and keeps running!  I was so stunned that I didn’t notice a stick in the sand and impaled my foot.  I almost went down but somehow I was able to catch my balance and get back beside Jack, and then manage to get in front of him.  He was all happy and wiggling as I scratched his ears then when I looked over to Piper and Leo, Jack took off down the beach again.  I don’t know what he thought he was doing or where he thought he was going but I think he was just running for the sheer joy of it because he was bouncing and all wags when I finally slowed him down.  I limped back to the car, keeping an eagle eye on the old man the entire time.  For such an awkward-looking dog, he can dodge and jump washed-up trees with the best of them.  Obviously better than me.

With now-tired puppies, we set back down the road.  It was starting to get late and finding a place to sleep was high on the list of things to do.  Then we found Albert E. Sleeper State Park.  Problem solved.  After making a few laps around the park, I picked a site and then booked it using the phone at the staff building.  The phone service was so terrible and the woman on the other end and I basically had to repeat ourselves three times for each sentence but finally, we got it all sorted out and the dogs and I set up camp.

Albert E. Sleeper State Park is on Lake Huron, Saginaw Bay to be exact, and we walked across the road for one last view of the water.  Jack was content to stay close this time and we had a leisurely stroll in the sand.  With everyone good and tired, we walked back to our site, and were soon asleep.