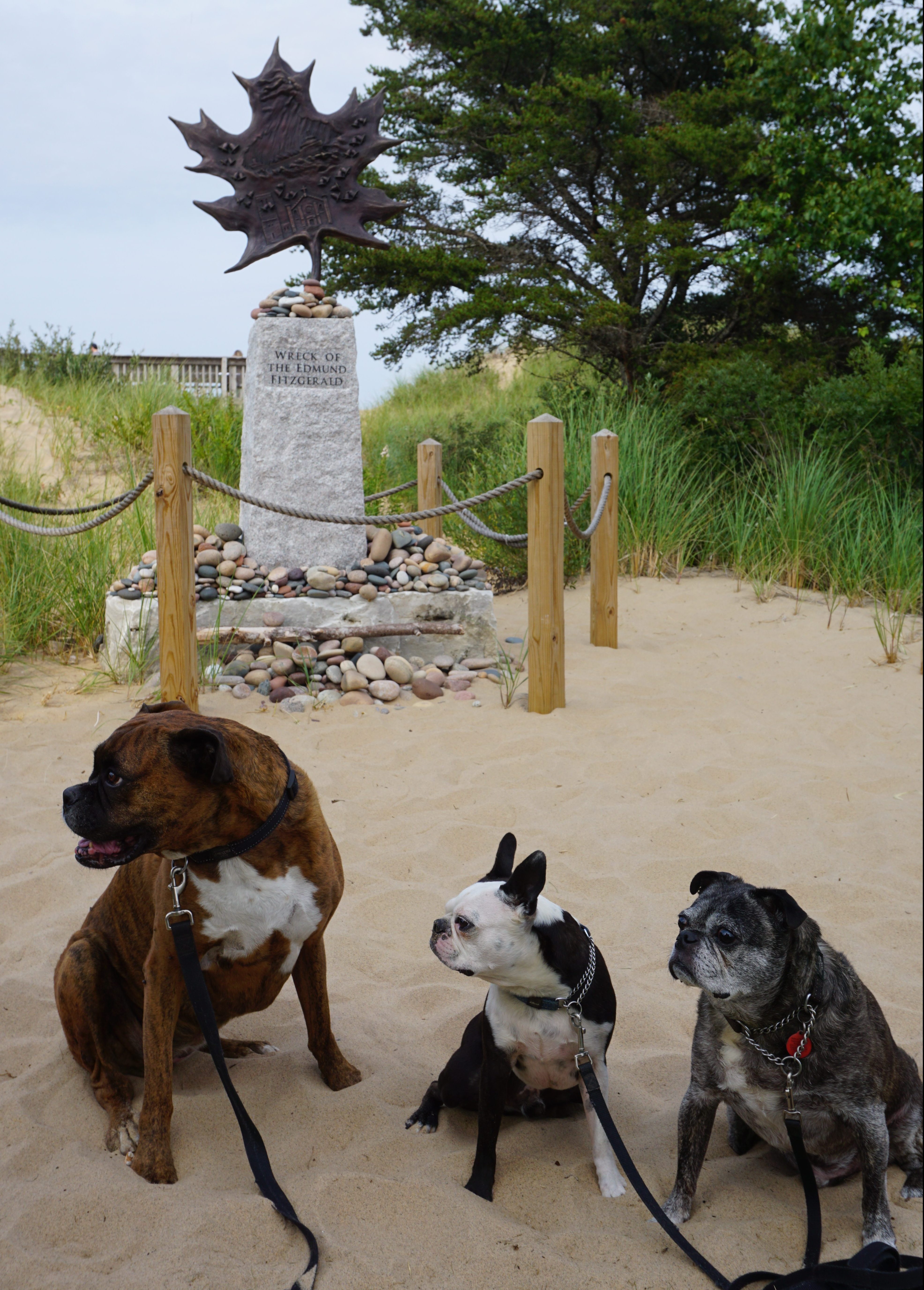 The Great Lakes are the largest body of freshwater in the world with a surface area bigger than Texas and with shorelines that pass through Ontario, New York, Pennsylvania, Ohio, Michigan, Indiana, Illinois, Wisconsin, and Minnesota.  This Great Lakes road trip is inspired by the Great Lakes Circle Tour.  Our tour consisted of three legs: Lake Huron and Lake Michigan, Lake Erie and Lake Ontario, and lastly Lake Superior.  This is the final leg of our Great Lakes adventure.

We had unfinished business from the first leg of our Great Lakes vacation: because of bad weather and my tendency to meander,  we ran out of time and I had decided that we would do the Lake Superior segment separately (check out the first day of our Great Lakes Road Trip here).

Fun fact: For the record, Lake Superior is my favourite of the Great Lakes.

We left home a little before 7:00 am on August 10, 2018 and started the drive north.  Orillia is the first city that we pass through and it’s a good place for food and to let the dogs stretch.  After a quick stop at George’s Country Style Restaurant, I soon left with bacon, eggs, home fries, and toast; the ubiquitous road breakfast.  After we finished breakfast (yes the dogs sampled the bacon), we continued north but not for long; when I saw a sign for a dog park on the edge of Orillia, I decided it would be a good place to let the dogs out for a morning run.  I’m guessing that I’ve never seen it before because we usually drive by when it’s still dark.

The park is a quick drive off the Trans-Canada Highway in Clayt French Park.  The fenced off-leash area is a short walk from the parking lot at the back of the property.  The first thing I noticed was the bus shelter in the park that provided a great place for people to sit as the dogs play.  It’s a good-sized park with some large trees and shrubs.  Just as the dogs were exploring, another dog entered and we got the chance to meet Maxwell the boxer.  He was a stunning black boxer and Piper took a shining to him immediately.  I tried getting photos of the two of them playing but they were too fast and all I got were blurs.  As fun as it was to watch Miss Piper and her new crush, we had to drive on. 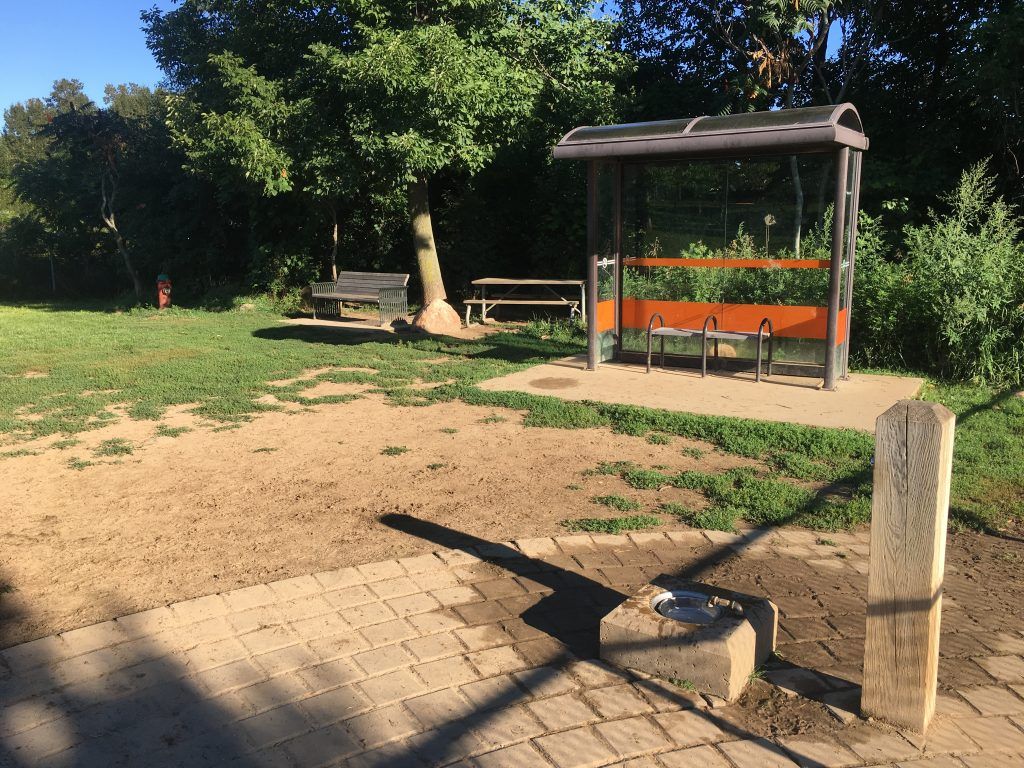 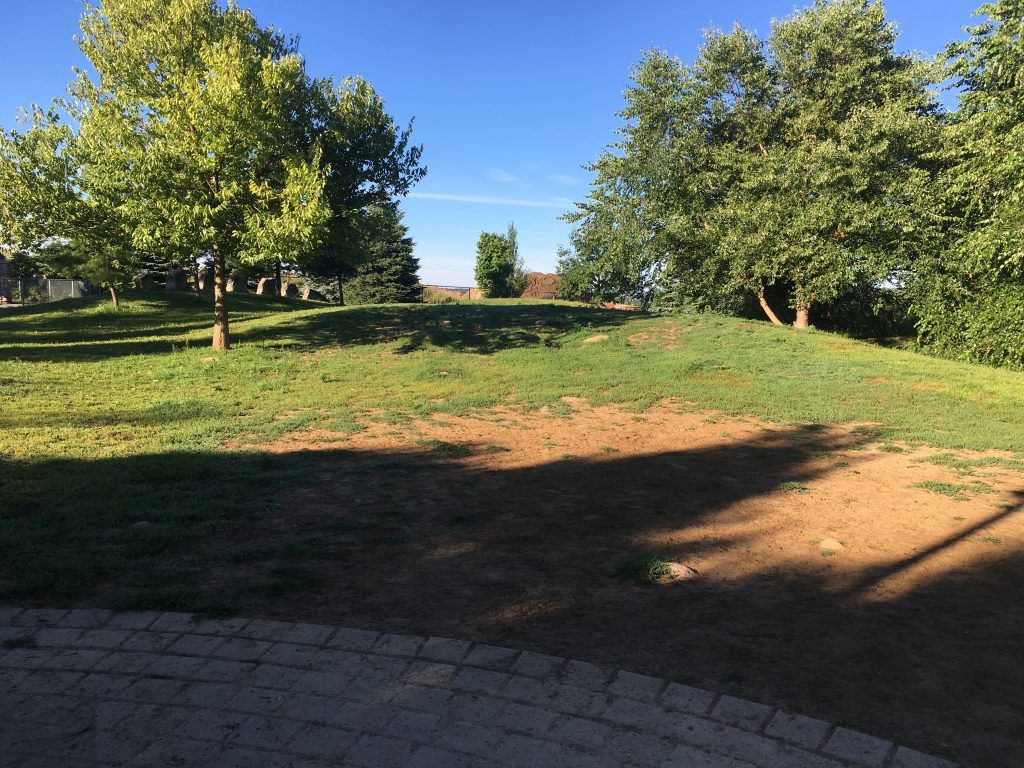 While this part of the Trans-Canada doesn’t have the fancy rest stops like the OnRoutes that line the 401 and 400, there are some places to pull over, use a fancy port-a-potty, and hike some trails.  Luckily we found one of those spots as we were driving north of Parry Sound.  A trail from the parking lot led down to a river and the dogs and I carefully picked our way down.  Too bad I left both my camera and my phone in the car.

As we were passing by Sudbury, I decided that I was in need of some additional caffeine.  Luckily there was a really good coffee shop just off the highway at Salute Coffee Company.  They use Pilot beans which are some of my favourite coffee and I savoured the steaming goodness as I brought the dogs out of the car for a quick sniff and pee before we drove on.

With the exception of a quick swim break at a rest stop, we didn’t stop again until we got to the town of Spanish.  As we drove by Lucky’s Snack Bar, I thought that a snack stop was definitely in order.  Rather than leave the dogs in the car, I brought them with me since the line-up was outside of the building.  Once I got my burger and fries, we sat in some shade and enjoyed our lunch before driving on.  After a photo of course.  If you’re passing through in the summer, especially on a weekend, be prepared to wait.  There is a small playground and some picnic tables but not much in the way of cover so be prepared for the weather.

We drove to Sault Ste. Marie where our border crossing, other than a long line, was quite uneventful.  Remarkably uneventful actually.  That’s two crossings that have lacked any of the awkwardness that I am used to.  It’s a little sad.

It was in Sault Ste. Marie that we officially started our tour of Lake Superior.  After we had left the city behind and were driving along the shore, I noticed several trails off the road and decided to stop to let the dogs swim.  Luckily we found a lot that was empty, not a person in sight, and no wildlife around so I let the pups off their leashes.  Naturally Leo dropped into each spot of sand and rolled his way to bliss as Piper and Jack were soon belly-deep in the water. 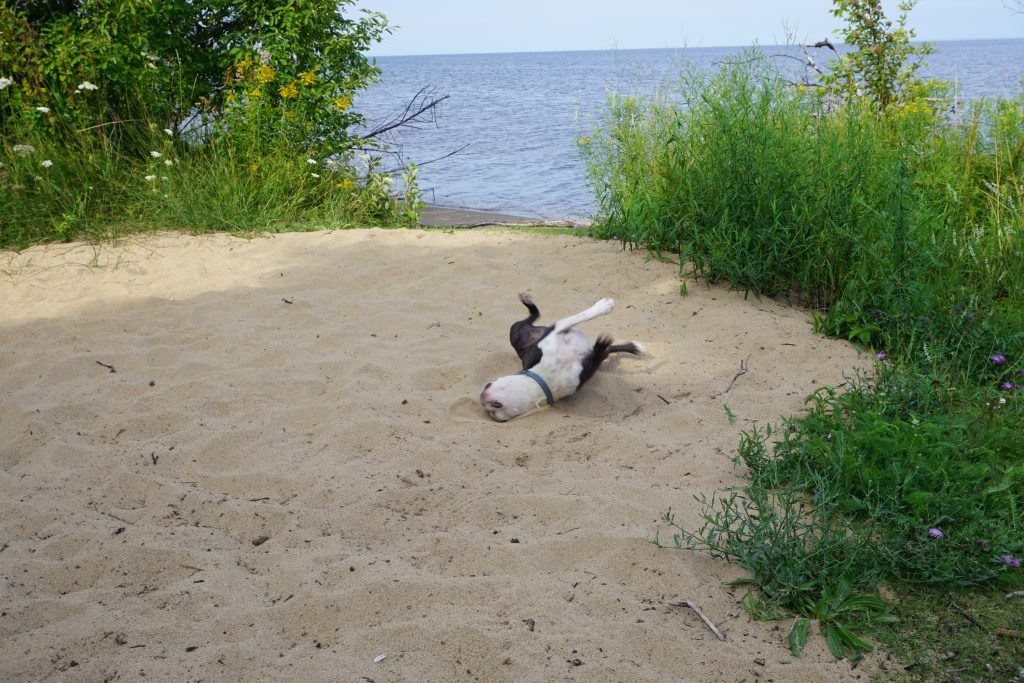 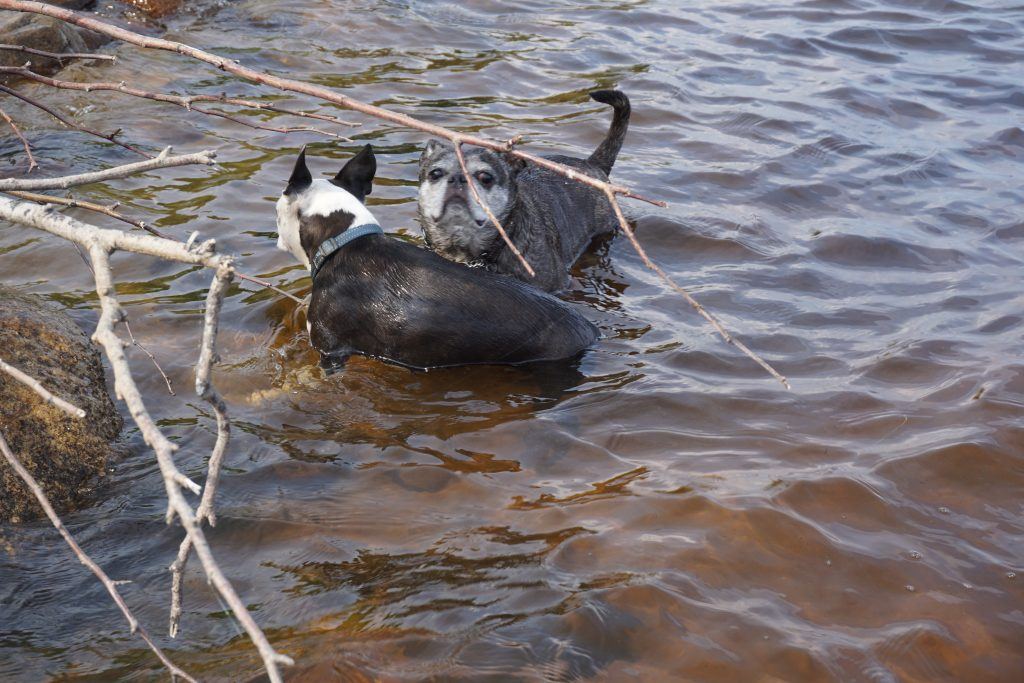 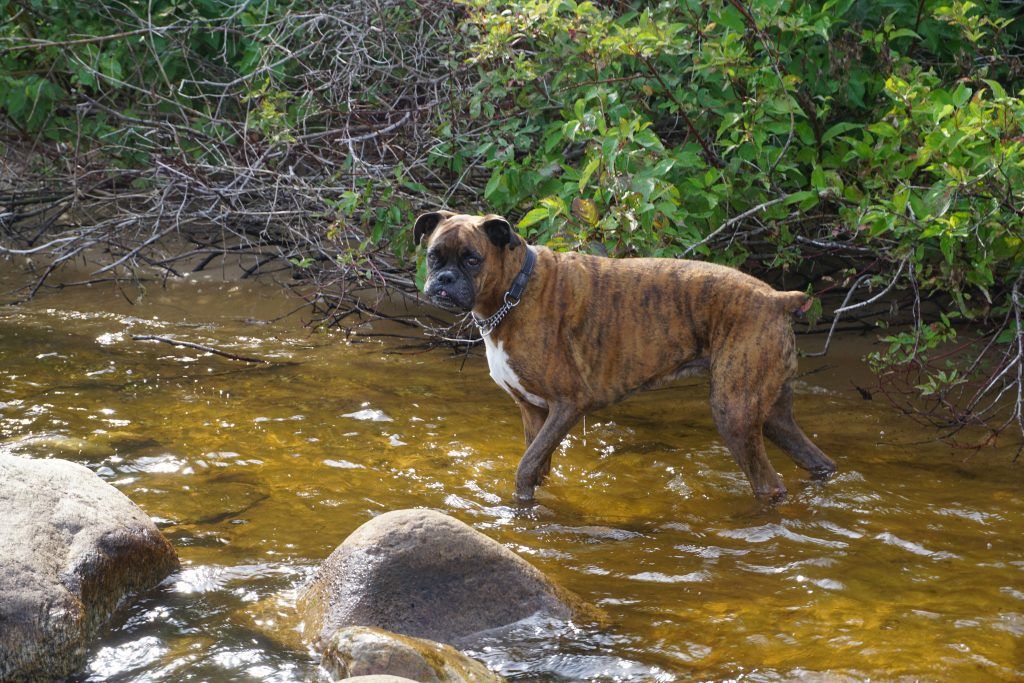 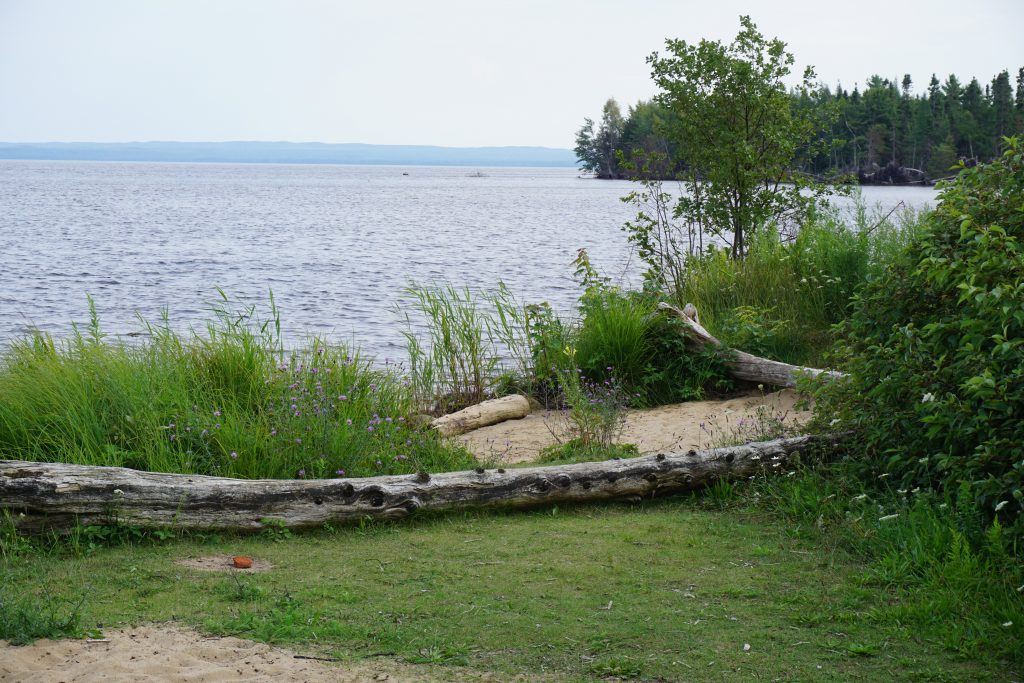 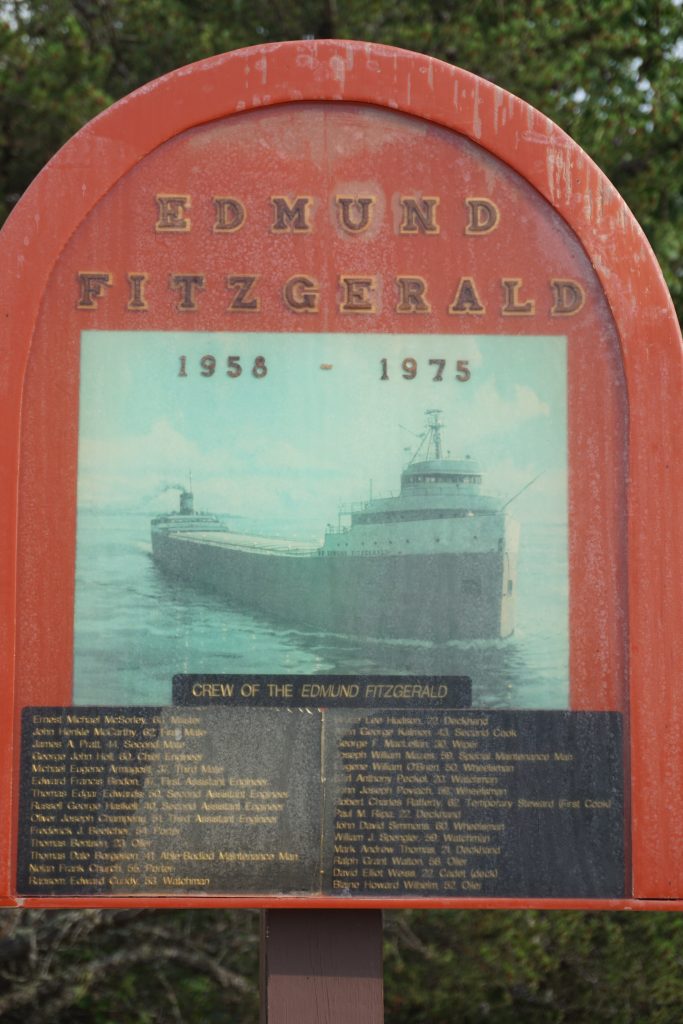 As I sat the dogs down for a photo, their attention was drawn to the side and when I looked over, there was a family that seemed to be in in awe of my posing little pups.  With photos out of the way, the dogs went for a visit.  The youngest of the family, Peyton, was particularly drawn to Leo.  That’s not surprising seeing as the other two dogs are larger and can be scary for little ones.  What was surprising was that Leo seemed to be as taken by Peyton and stood by him for the whole visit.  Leo normally tolerates children but is not as comfortable with them as he is with adults so this was something special to see.

We walked down the beach so the dogs could have a swim and roll in the sand before we returned to the car and continued the drive along Michigan 123. 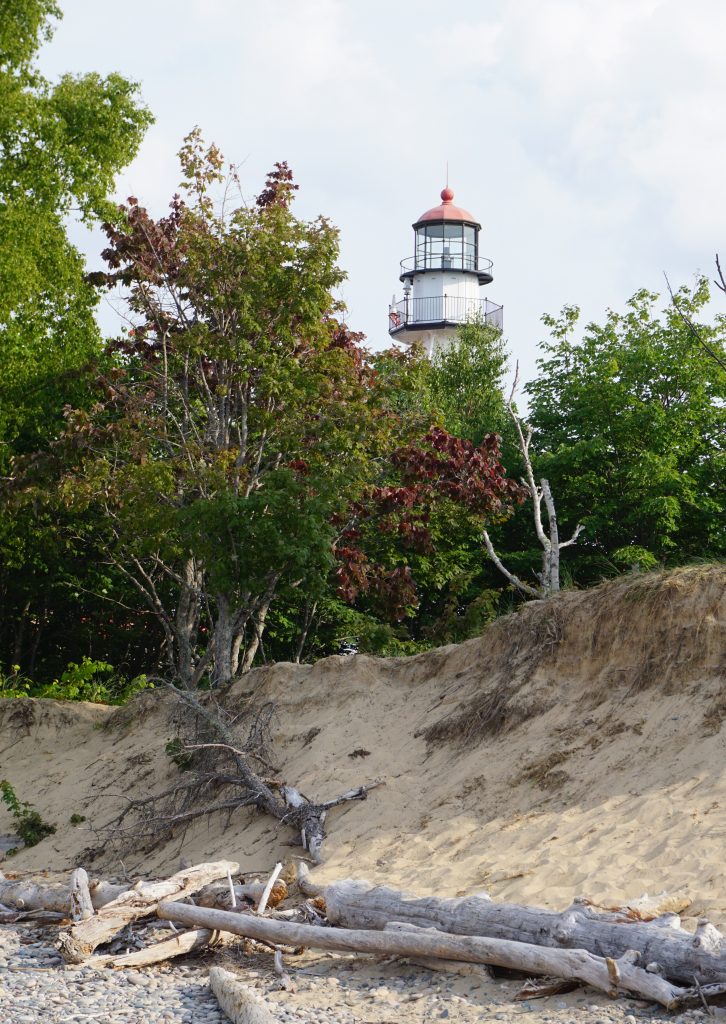 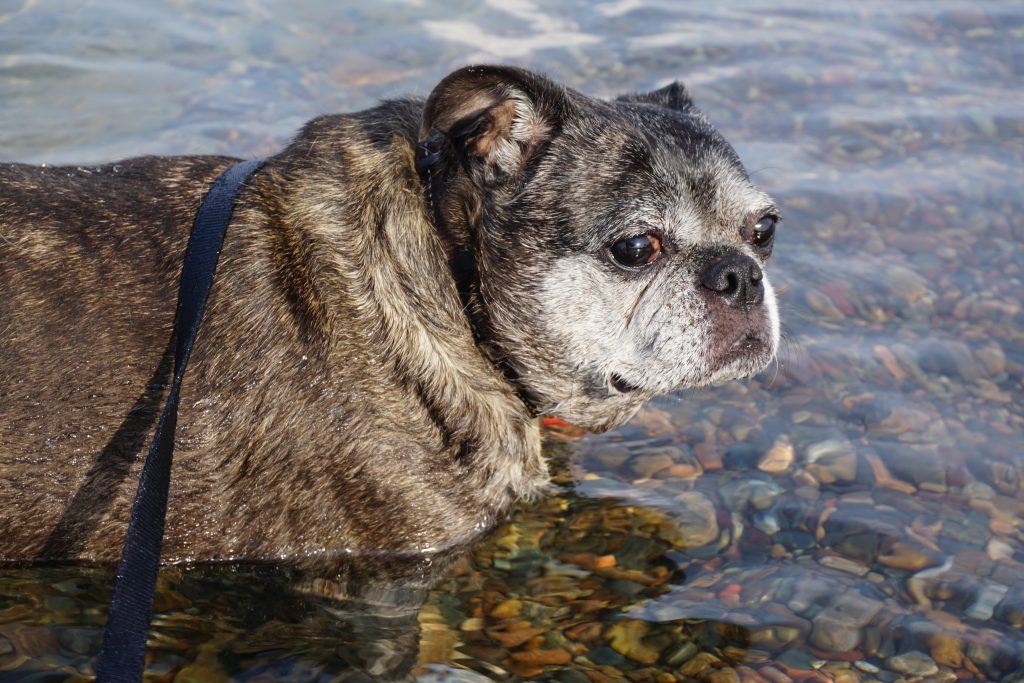 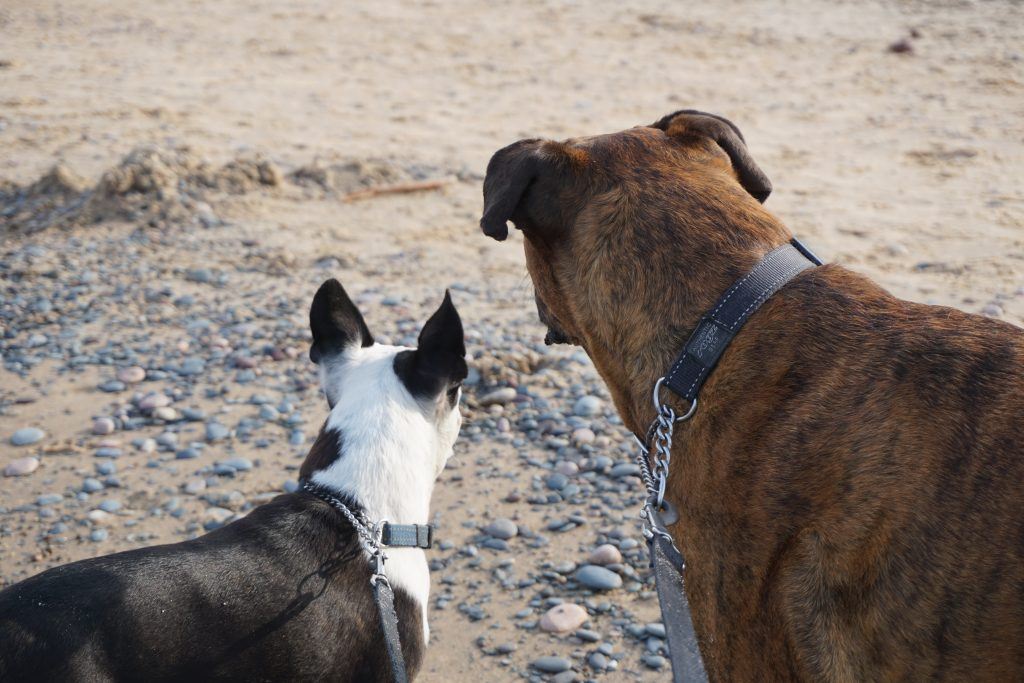 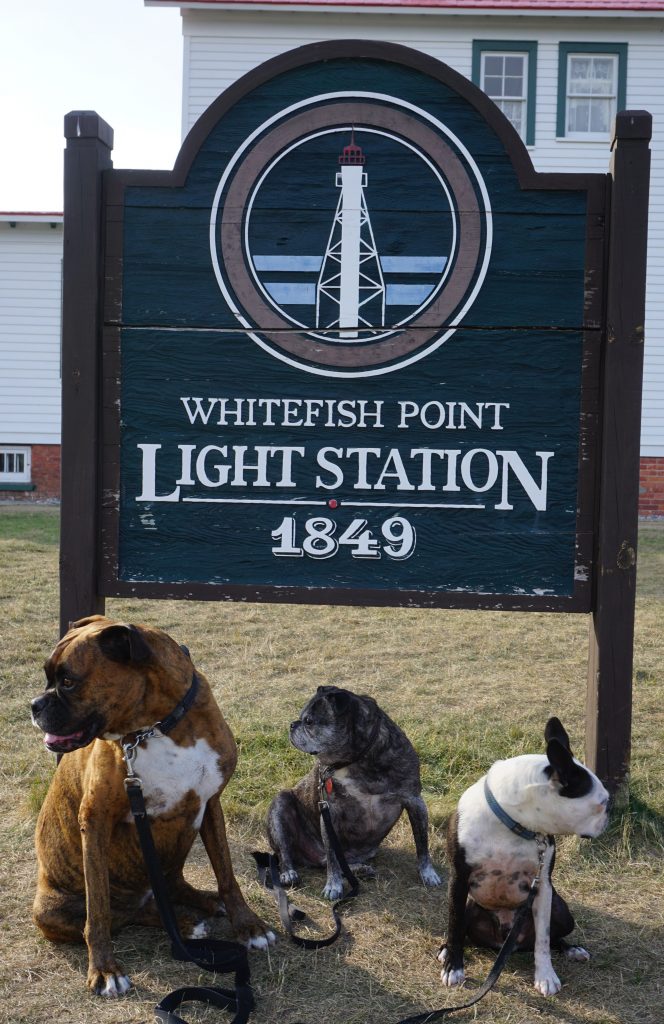 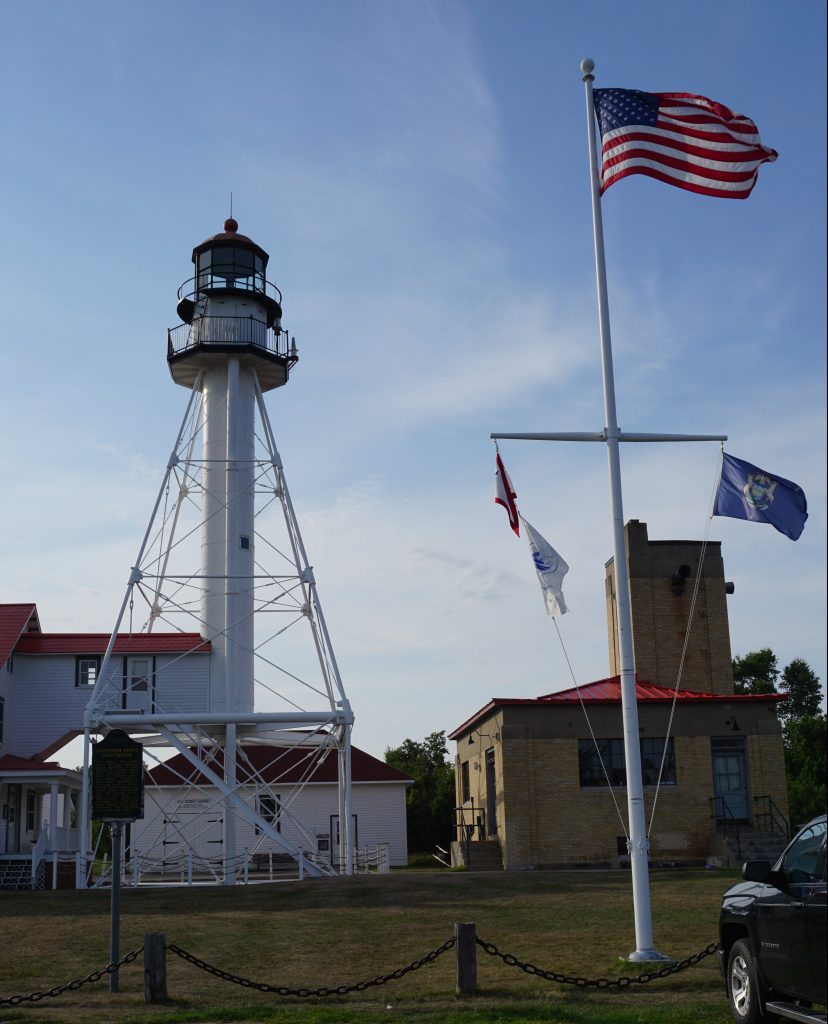 Fun fact: The dangerous stretch of water on southern Lake Superior between Munising, Michigan and Whitefish Point has been called the “Graveyard of the Great Lakes,” and “Shipwreck Coast,” as hundreds of ships have been lost in the area. It is estimated that 6000 ships have sank in the Great Lakes, with a loss of nearly 30,000 lives.

We had not gone far when we entered Tahquamenon Falls State Park.  I pulled up to the booth and the first question I asked were if there were any spots available for the night.  Unfortunately there weren’t any.  Oh well.  We could still go for a walk and our first stop was at the Lower Tahquamenon Falls.  Wide paved trails led from the parking lot to viewpoints over the falls allowing for an easy walk for senior dogs and anyone pushing a stroller.  There were kids everywhere and the dogs were in heaven with all the attention they were getting.  Eventually I pulled them from their adoring fans and we headed back to the car.

Our next stop was Upper Tahquamenon Falls.  Another wide, paved trail took us to viewing platforms where we could look out over the falls.  There were also trails down to the river but I did not want to stress out Piper’s back legs so I decided to forgo a visit to the water.  Even without a hike, we did get a chance to get up close and personal with the river: The Tahquamenon Falls Brewery and Pub is next to the parking lot for the Upper Falls and they brew beer using water from the river so I still had a chance to experience the waterway.  It was almost closing time but luckily food was still being served and even better, dogs are allowed on the patio.  I ordered the fish sandwich with chips and a Falls Tannin Ale to wash it down. I wasn’t too impressed with the fact that they charge a “to go” fee even if you’re sitting on their patio.  The food was good but I thought it was overpriced, for both the portion size and quality.  The best part of the meal was the beer and did I mention it was made from Tahquamenon Falls water?

Fun fact:  The Upper Tahquamenon Falls are one of the largest waterfalls east of the Mississippi River. 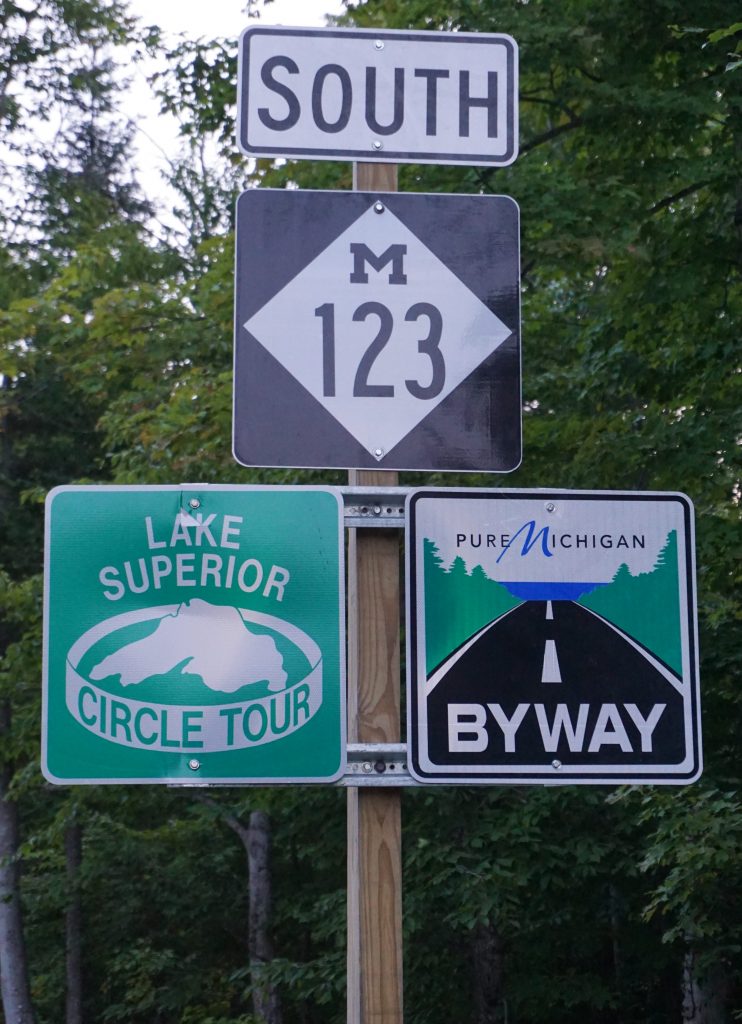 With dinner out of the way, we turned back onto Michigan 123 and began to look for a place to spend the night.  Campgrounds we passed through were booked up and every hotel and motel had lit “No Vacancy” signs.  When we passed through the town of Newberry, I drove past one motel that looked like it may have a room available so I stopped, hoping for a clean and quiet place to sleep after the long day of travelling.  When I spoke to the woman at the desk and told her I had dogs, she said that I would have to speak with her husband.  He came in and told me that I would have to pay a cleaning fee because of the dogs.  OK fine.  I was tired and it looked like Michigan was sold out and very few places would accept dogs.  Then as I stood there with my credit card in hand, he went on about how they have to charge more because of the dogs.  Yes, I get it as I kept waving my card towards him.  Then (and this was what got me) he told me that the only room available was a suite and I would have to stay out of part of it with the dogs.  Well welcome to Snapsville.  Population: me.  “So you’re telling me that I can’t go into part of a room that I’m paying for?  Even though I’m paying extra for cleaning?  Well it’s obvious you don’t want me here so I’ll leave.”  Out the door I went.  I would have respected him a lot more if he had just said no dogs, but don’t jerk my chain around and give me stupid excuses.  I was so angry I didn’t even write down which hotel it was.  They’re safe from a scathing review.  It wasn’t until I was fuming my way down the road that it occurred to me: with every other business booked, why did this one have room?  Hmmmmm.

By this time it was well after dark and I was exhausted so when I saw a rest stop in Seney, I joined the line of cars in the lot.  The dogs needed quite a bit of prodding to come out of the car for a pee and turned their noses up at dinner, preferring to crawl back into the car.  I soon joined them, tilting my seat back and falling asleep to the sound of owls outside the car and Jack snoring into my ear inside.