The Great (Lakes) Escape – Through the Door 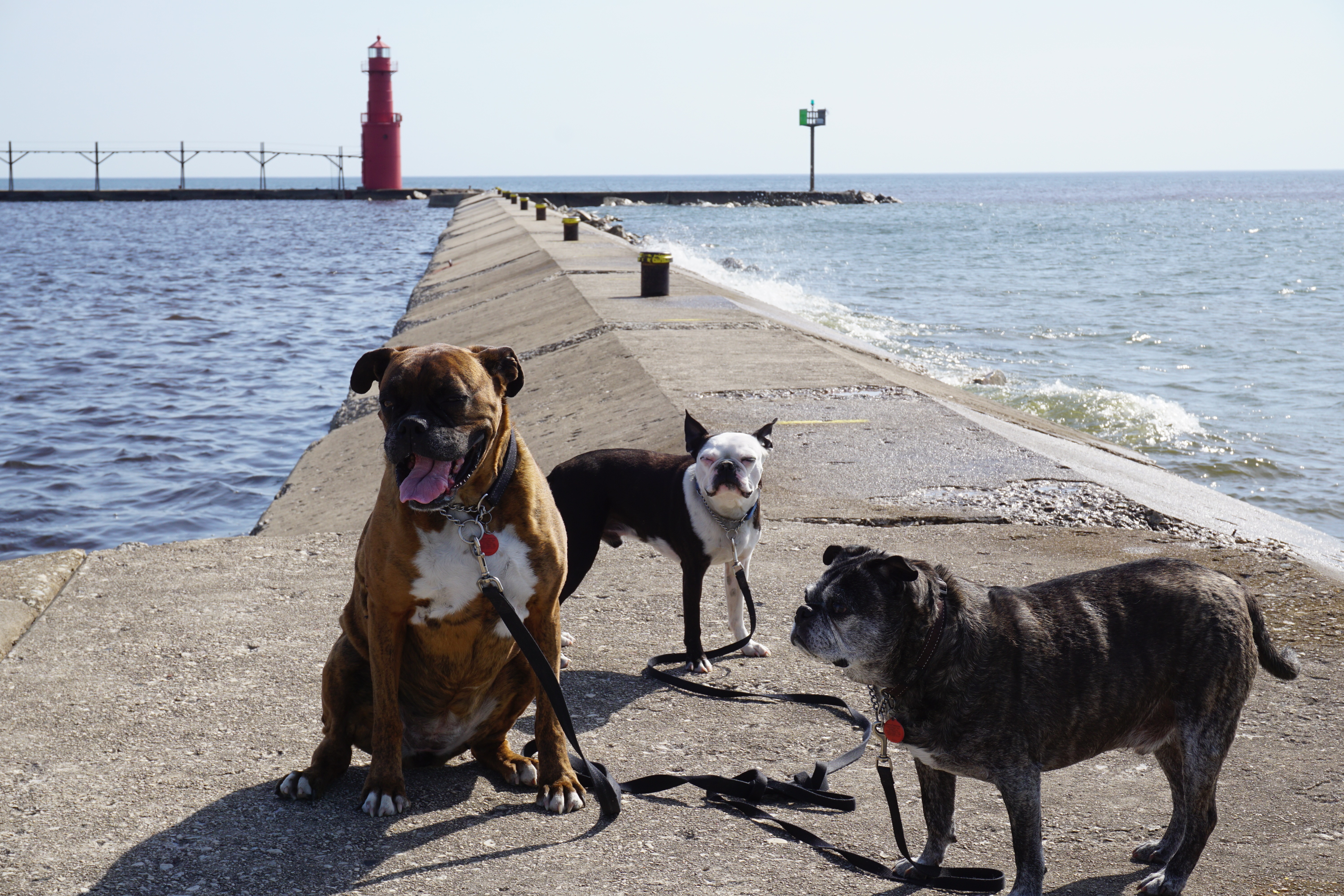 When I checked into Scenic Shore Inn the night before, the gentleman had warned me that there was construction next door and the sound of the crew getting started woke me up on the fifth day of our trip.  It took some work to get the dogs out of bed but with plenty of poking and prodding, I eventually got them all leashed up and took them to an open field next to the motel.  They ignored their breakfast while I packed up and were anxious to get in the car.  I suspect that they know that eventually I have to get breakfast so they save room for that.

We drove into Algoma and I couldn’t resist taking them out for a walk on the beach and along a breakwall to look at the lighthouse. 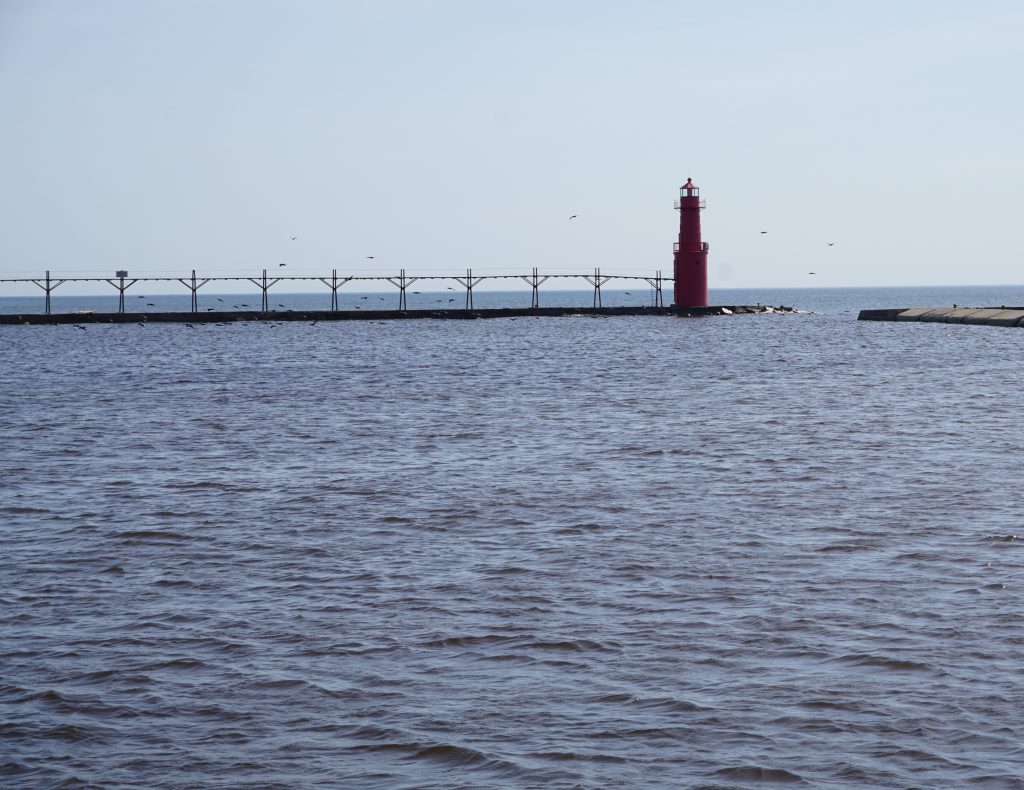 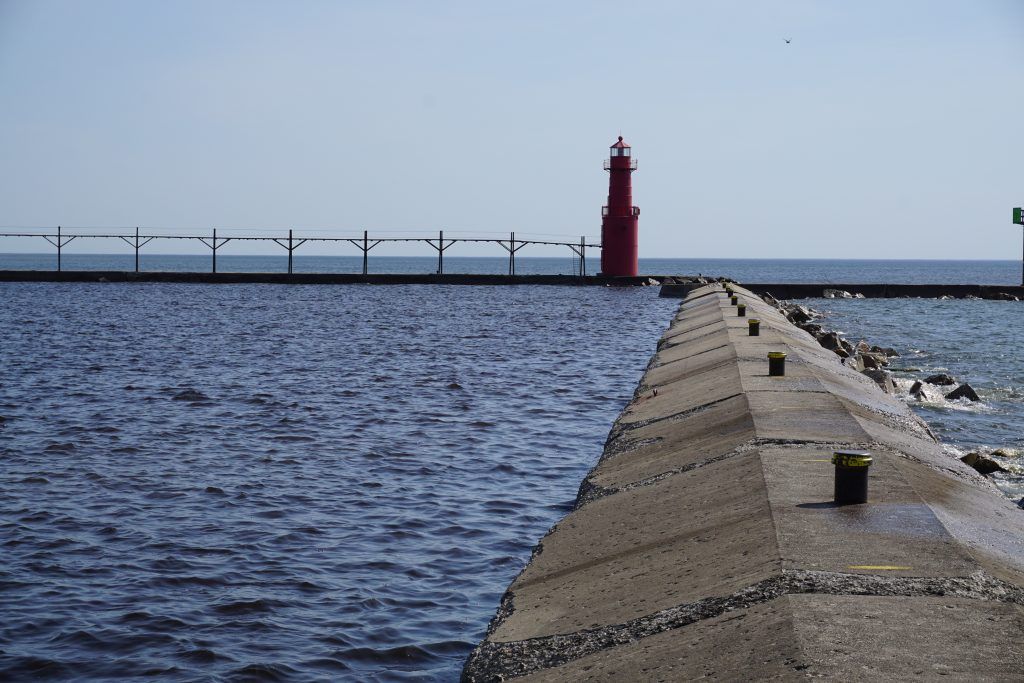 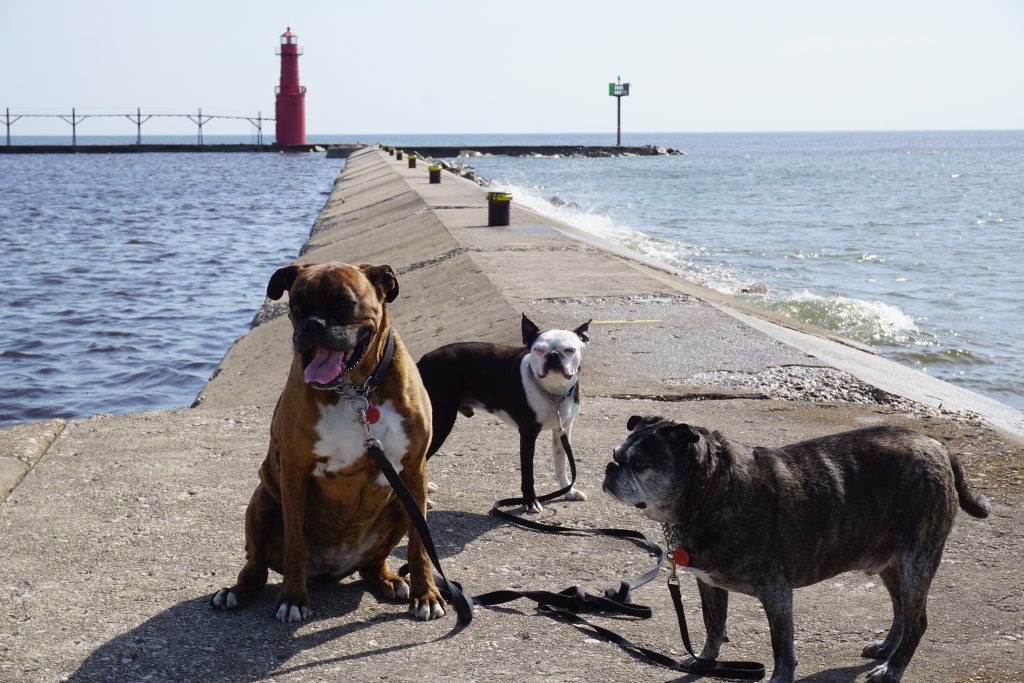 I also couldn’t resist stopping at Von Stiehl Winery, which happens to be Wisconsin’s oldest licensed winery.  As much as I wanted to sample the entire menu, morning wine and driving don’t make for good trips so I just bought a couple of the bestsellers and trundled back to the car.  As much as I wanted to bring back a wide sample of the goods from our trip, I still have a border to cross.

We had not gone far from Algoma when we were waved off the road by a giant mouse; a mouse that directed us to Renard’s Cheese.  If you can’t trust a giant mouse pointing at a cheese shop, who can you trust?  I wandered the cases, tasting every block of cheese and curd and jam that was offered.  Then I was brought to a halt in front of one case: chocolate cheese fudge.  I stood staring at the package, wanting to make sure that it wasn’t a trick of my caffeine-starved brain.  Nope, that’s what it said.  I turned to the woman at the counter and asked what it was.  One of the staff had been leaving the store area but when she heard me, she whipped around with wide eyes.  “Oh yeah!!”  They brought out a package for samples and I picked up a pack to take home.  Then I tried a sample and as soon as it hit my tongue, I turned back to grab a couple more packages.  It really is THAT good. 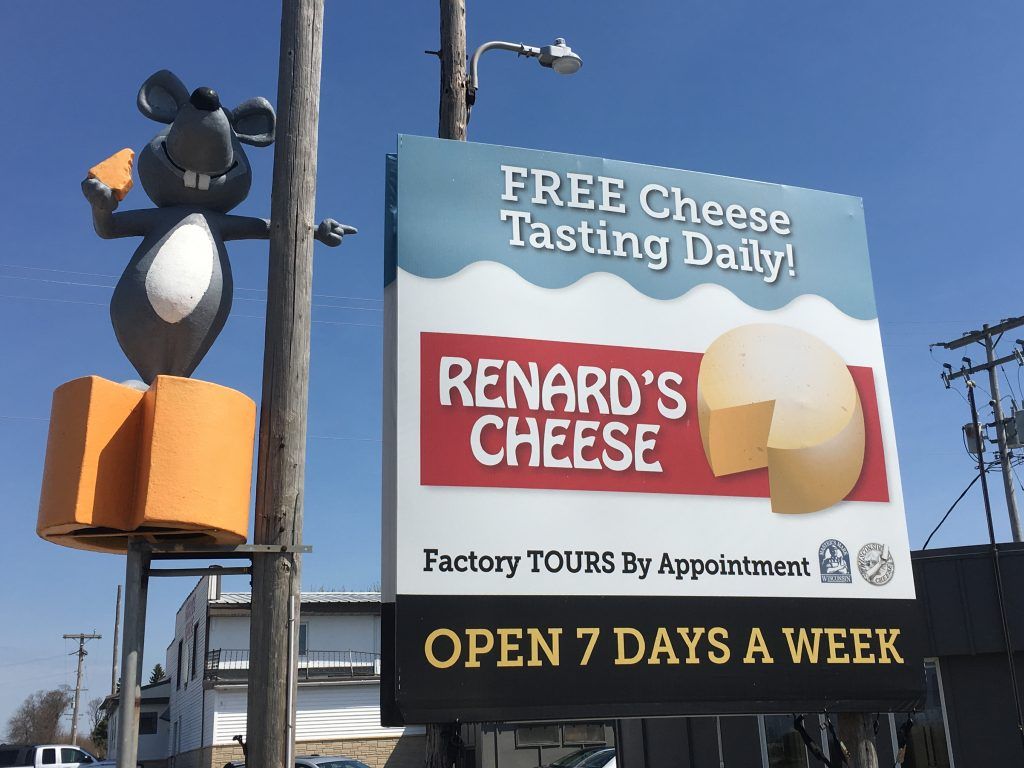 With the cheese products safely stored in my cooler, we drove a short distance until we came to Wienke’s Farm Market where I bought a few jars of lingonberry jam and some pickles.  I love farm stand pickles.  Heck I love pickles period. 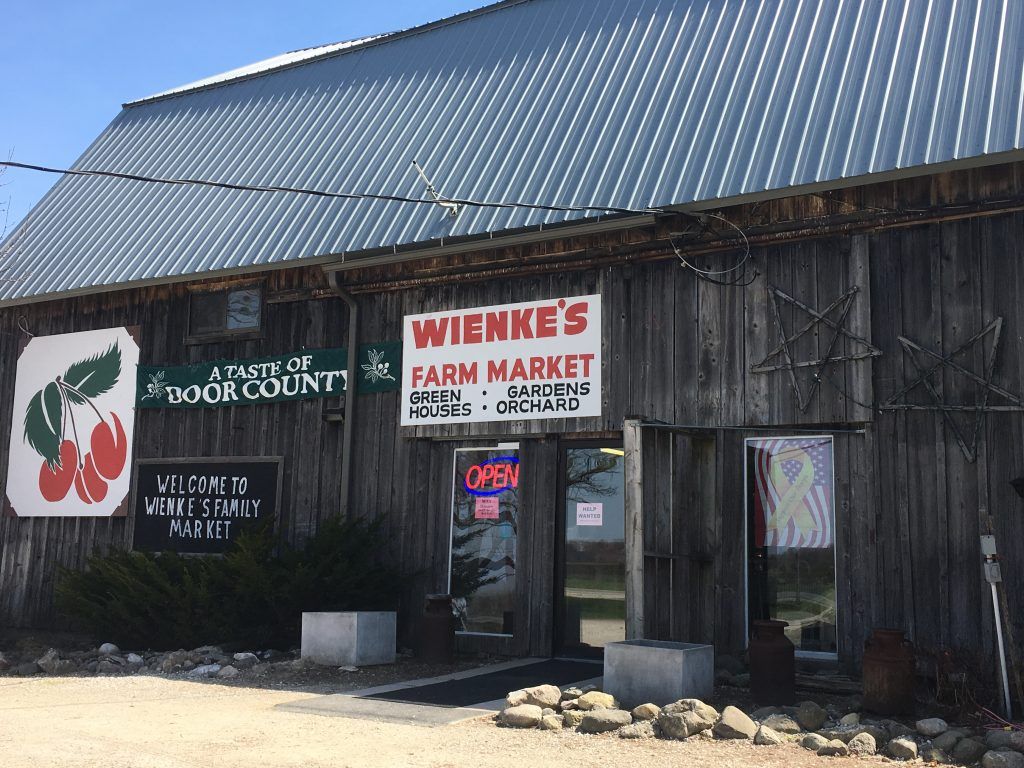 By the time we rolled into Sturgeon Bay my tummy was growling along with the radio.  Fortunately, we passed by Scaturo’s Baking Co. and I slid in to order bacon and eggs and a coffee then sat with the dogs out front to wait.  I was sitting out front with the dogs when the woman that took my order brought the food out to me.  Naturally the dogs thanked her for bringing food.  As soon as they smelled bacon they sat right down, their little eyes following the food as it moved from lap to mouth.  Of course they had a few little nibbles of bacon, much to the amusement of anyone that happened to be walking by. 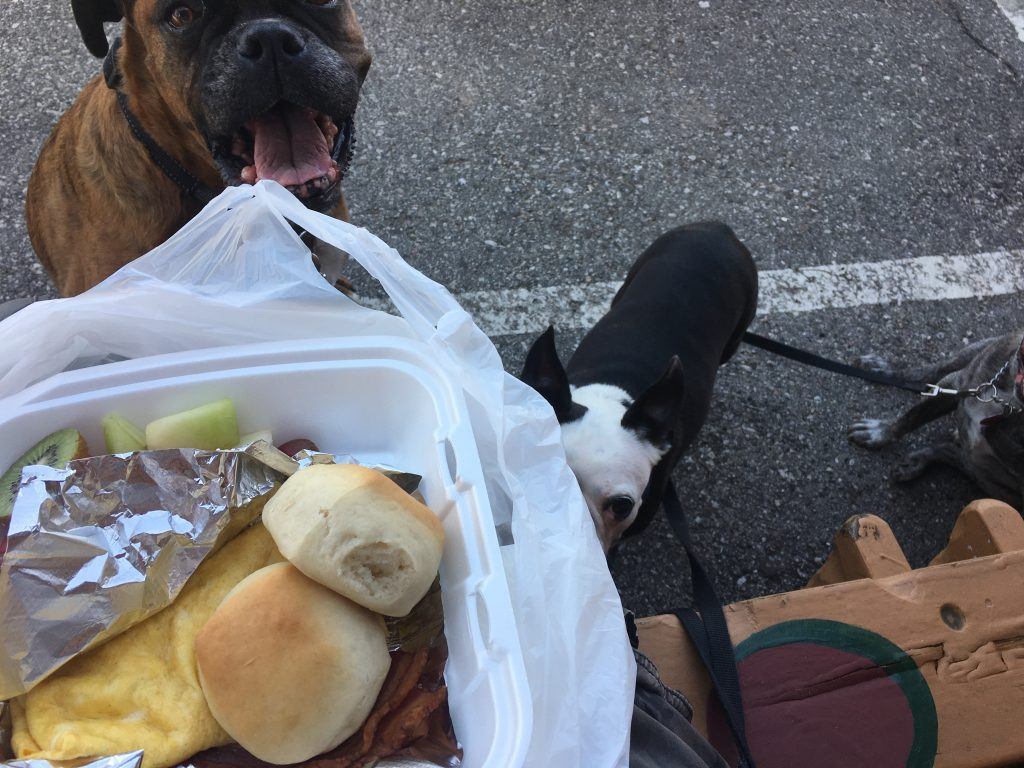 With full bellies, we continued onward.  I decided to leave the main roads and take the smaller roads that hug the shore of Lake Michigan.  I was driving along a road that was barely more than tire ruts when I saw an informal parking area next to the water.  We had found a beach that was just calling for some dogs to run on it.  Leo had so much fun, he tried to bring the whole beach back into the car with him.  (sigh) 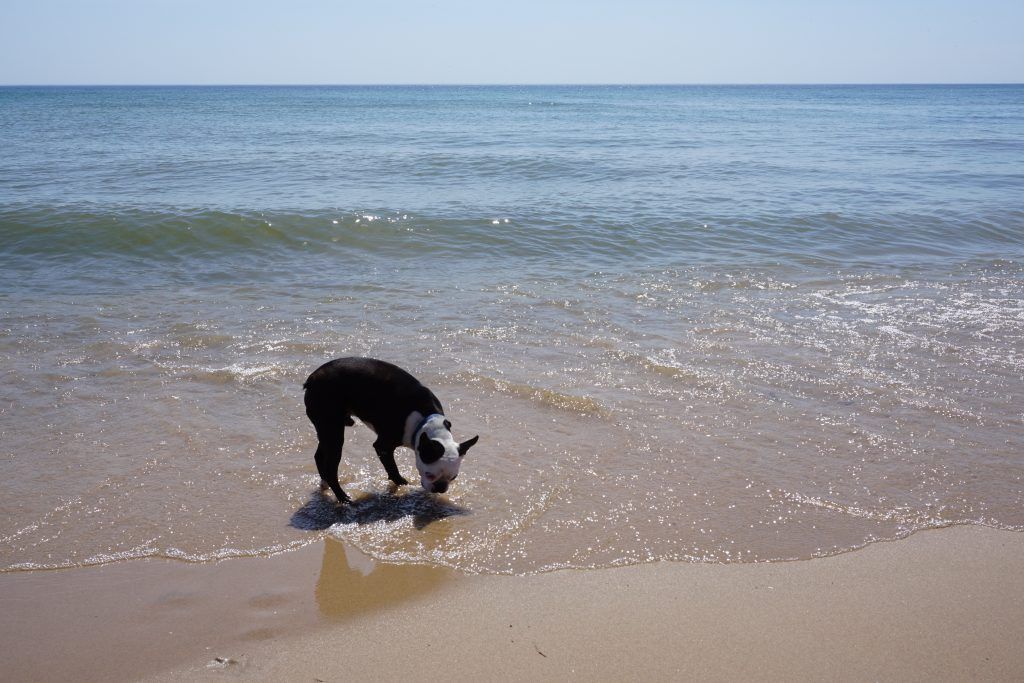 When we reached Sister Bay, the route turned along the west side of the peninsula and we began making our way south along Green Bay.

Fun fact: The name Door County came from “Death’s Door”, the treacherous passage where the waters of Green Bay and Lake Michigan meet between the tip of the peninsula and Washington Island.  It was anglicized from the French “Porte des Morts”.

We were passing through Fish Lake and I was feeling a tad bit peckish, a little tickle of the sweet tooth.  When I saw Not Licked Yet Frozen Custard, well it could only be a sign.  It’s a place for the whole family to enjoy with a playground for the little ones, and benches and chairs along the back of the property next to a pond where it’s a bit more quiet.  I ordered a chocolate custard cone then felt the full guilt power of three pairs of eyes staring at me.  Fear not, karma got back at me not long after I finished the cone. 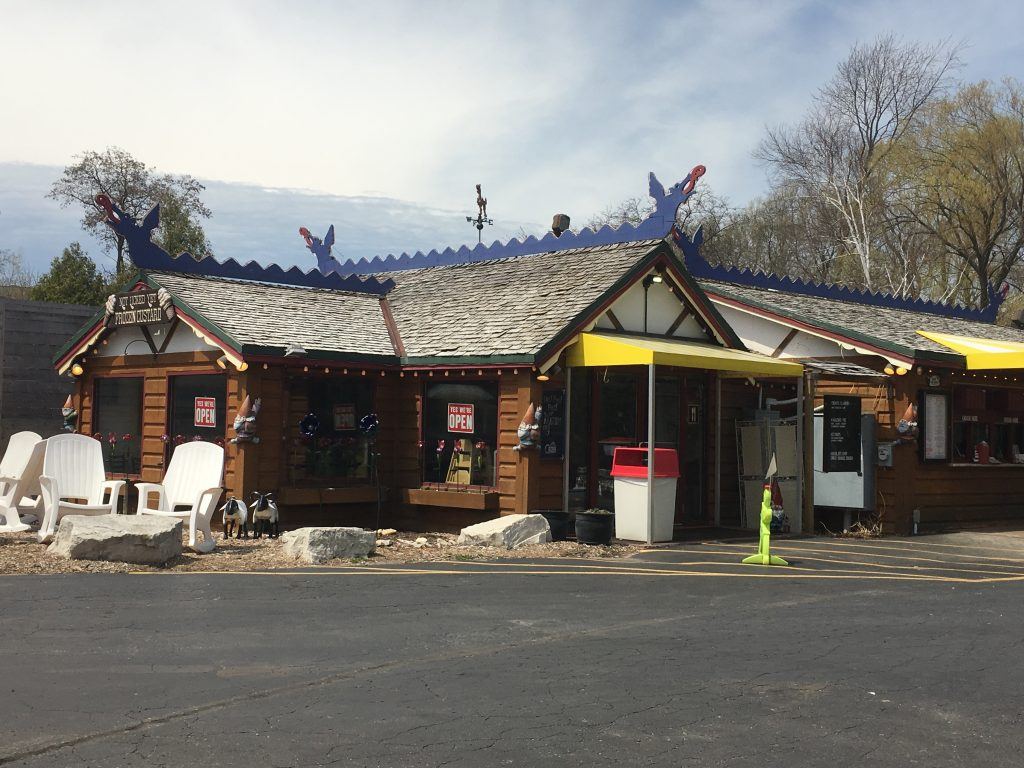 I drove the car out of the parking lot and heard a weird scraping sound so I pulled over and looked under the car.  A big branch had gotten wedged up under the wheel well.  So me being me, I just reached in to grab it then yanked my hand out when my palm was impaled by a bunch of thorns.  Well this was shaping up to be something that I wasn’t able to tackle on the side of the road so I drove to a nearby parking lot and even though the lot was almost right across the street, the sound of that thorny branch under my car was like nails on a chalkboard.  Once safely parked, I examined my prickly opponent.  Hmmmmm what I needed was pliers…wait a minute (imagine the cartoon lightbulb right over my head)!  I have pliers in my first aid kit.  I have them for pulling out porcupine quills but a flesh-tearing piece of tree is almost as bad.  With only a few choice words, I soon had the offending vegetation extracted and tossed it into a thick stand of trees where it’s not likely to cause any more troubles.

As we drove south, I started seeing signs for Door County Winery and Door County Distillery.  I was hoping that it would be a place where I could bring the dogs out to enjoy but unfortunately it was not.  I was confused when I stepped inside as there seemed to be nothing really on the main floor.  It turns out, the tasting and shop areas are on the second floor.  Not wanting to leave the dogs outside for too long, I bought a bottle of cherry mimosa (intriguing) and a bottle gin which is something they are apparently well known for.  Safely stashing my growing collection of bottles, we drove south.  After we stopped at Door County Coffee & Tea Co.  of course.  I was tempted to stop in Green Bay but to be honest, I wasn’t in the mood to deal with traffic and people.

Fun fact:  Door County is one of the top cherry producing regions in the United States.

As we drove along the west shore of Green Bay, we left Wisconsin for Michigan and left the sunshine for rain.  Not only was it raining but the temperature seemed to plummet.  Fortunately we were able to find Sunset Shores in Escanaba, Michigan.  Check in was full of pleasant surprises: not only are there no pets fees (amazing) but the dogs got a literal handful of cookies.  From the outside, the motel looks a little tired, but our room was very clean and had the best shower I have seen in a long time.

Not feeling like going out again, I caved and ordered the meatza pizza from Oven King Pizza.  It was a good pizza and so loaded with meat, I think I felt my arteries clogging with each delicious bite. 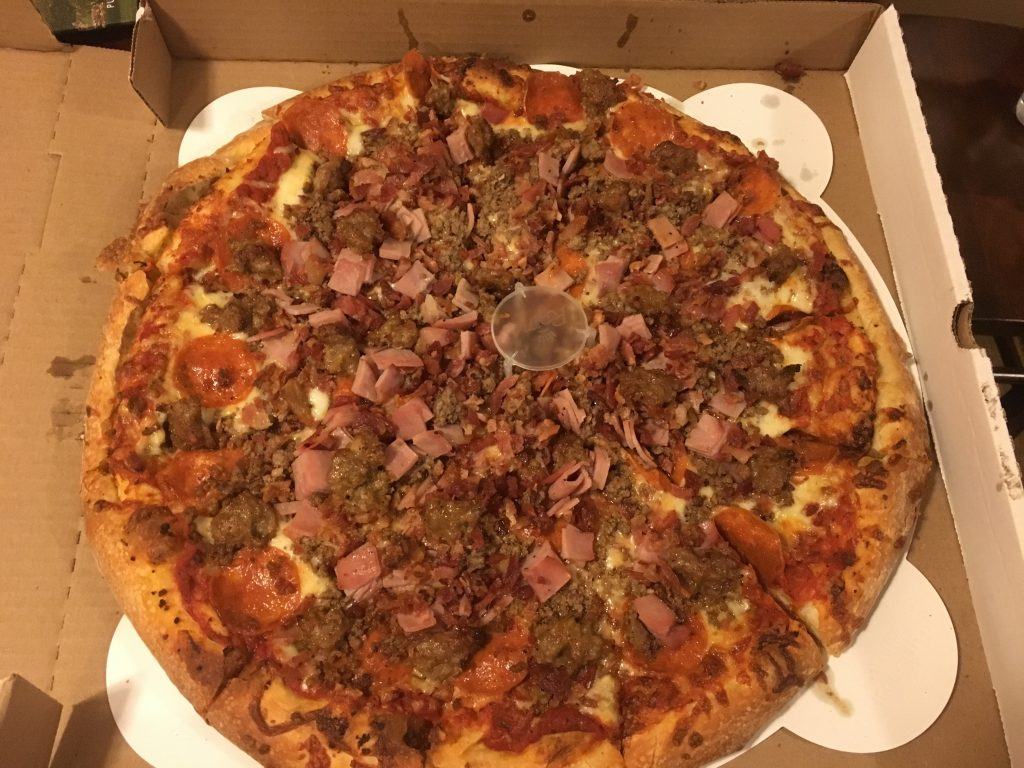 As soon as the pizza was put away, the dogs curled up on and around me and we snuggled as we watched some TV until I couldn’t keep my eyes open anymore.

Did you miss the beginning of this road trip?  Go back to the start here.