The Great (Lakes) Escape – The Day We Met a Saint 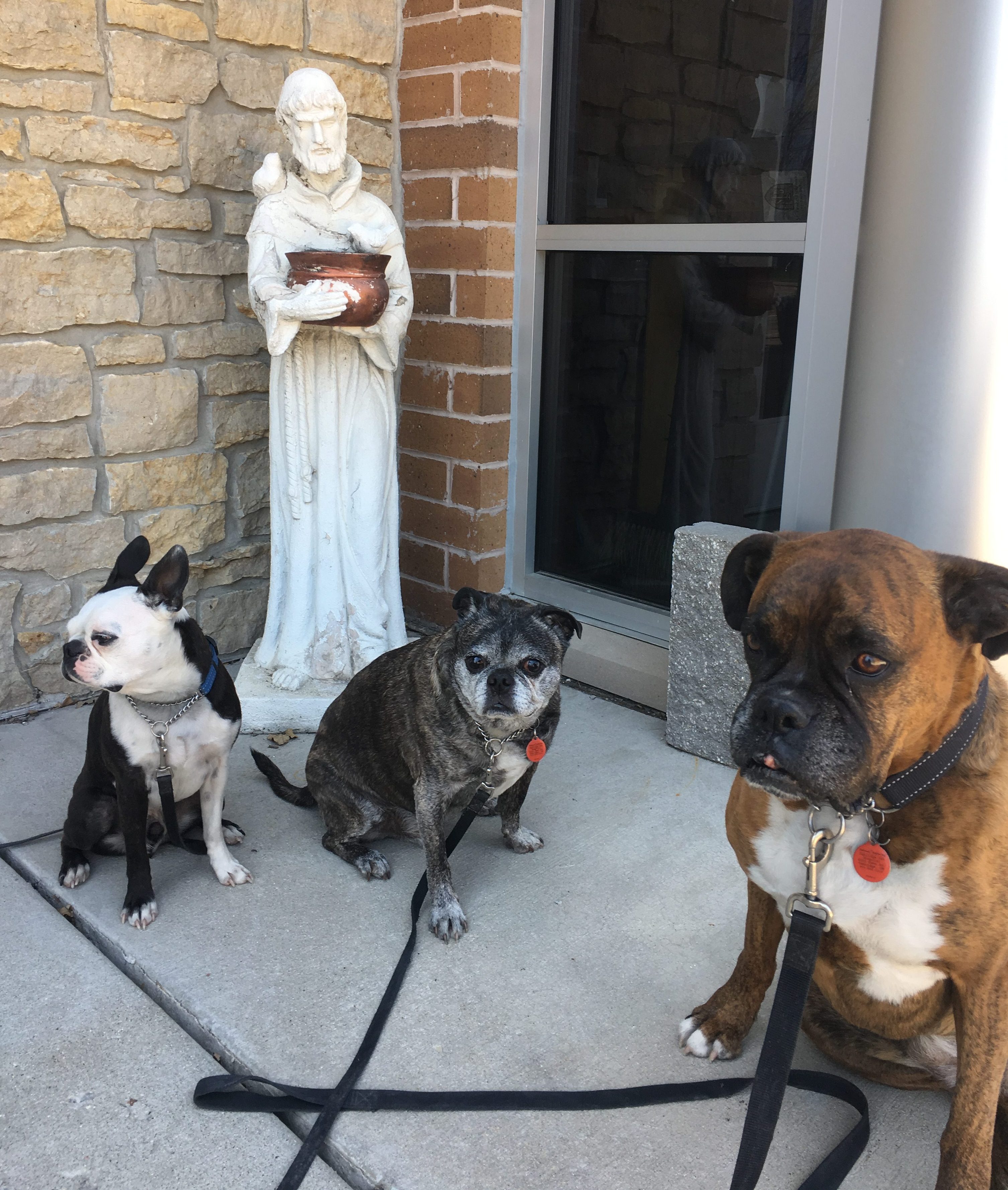 It’s a really nice feeling to lay in bed and roll your lazy butt out from under the blankets when you want to and not because there’s this burning need to get some pavement under your tires.  Lazily stretching around the heaps of dog around me, we cuddled for a while until Leo started pouncing on Jack and I ended up taking a paw to the face.  After the feast from the night before, I wasn’t that hungry but I was in sore need of caffeine so I steered the car towards Bluffington’s Cafe in Lake Bluff.  I was aimlessly listening to my phone order me around when I turned onto Scranton Avenue and into this adorable little strip of town.  It was like a pocket of historical buildings with Bluffington’s at the very end.  My plan was to just get a coffee to go but when I saw the bistro tables out front, I got a breakfast sandwich as well.  The dogs and I were happy to take the opportunity to enjoy some lovely weather and a pleasant meal.  The coffee was okay but the sandwich was tasty.

Once I had finished eating, we strolled down the block to enjoy the feel of the area.  We were outside a store and as the dogs were sniffing a planter, I caught sight of some movement inside.  The store’s resident boxer was intently watching the interlopers until his owner (and the owner of the store) let him outside to visit.  He was young and excitable and soon there was a tangle of dogs around my legs and playful but angry-sounding noises.  All of my dogs sound growly even when they’re happy and it scares people away.  We were able to split up the party before I ended up getting taken down by a leash.

We continued a little farther down the block and I noticed what looked like a patio between two buildings: there were tables, some lattice with vines covering it, and what’s that sign down at the end say?  OH MY GOODNESS AN ESPRESSO SHOP!  Prairie Espresso was literally a counter inside and that’s it.  This looks promising.  I asked if I would be able to get a cortado.  I can?  YAY.  Would I like a crunchie to go with that?  I have no idea what it is but you bet.    Then something really freaky happened: the gentleman working inside asked what part of Canada I was from.  I was stunned.  I quickly looked to see if my shirt had something Canada-related (it didn’t).  Apparently I have an accent that is really obvious when I say…wait for it…”about”.  I don’t say “a-boot” no matter what South Park will have you believe but according to this guy, he could hear it.  Well now that’s something to think about (hahahaha get it?).  I took my cortado outside with my crunchie, which turns out to be a hard cookie along the same principle as a biscotti, and enjoyed the moment.  If I lived closer, I would be here all the time.  Alas we do not live closer and as enjoyable as the patio was, the road was calling.

Fun fact: Lake Michigan is the only Great Lake that is entirely in the United States.

As the dogs had not had a real walk yet, I stopped at Illinois Beach State Park hoping I’d be able to let the dogs go for a swim as it was starting to warm up.  No such luck: dogs weren’t allowed on the beach and there were plenty of people around to witness my rule breaking, never mind a police officer in his car.  Fortunately there was a paved trail next to the shoreline so the mutts were able to get some decent exercise.  It’s not the kind of trail that we all prefer but with my two senior citizens, a nice paved path is the best bet especially after the dunes the day before.  Besides, they stopped every 20 seconds to pee on something so I don’t think they minded the easy terrain.

Once we had all stretched our legs, we headed back to the car to continue the drive north along the west shore of Lake Michigan.  We left the hustle and bustle of Chicago behind us and a bare hour later, we cruised into Milwaukee.  Oh yes.  Milwaukee.  What does one do in Milwaukee but check out dog-friendly breweries?  And what does one do when most of the breweries were closed because it’s Monday?  Keep looking!

I was ecstatic to see that St. Francis Brewery was open and that they had a dog-friendly patio.  It really is appropriate that the patron saint of animals would have a brewery that allowed dogs.  I happily strolled on up to the door to double check that I could bring my pack inside, only to be told that the patio wasn’t open yet because it was too cold.  Say what now?  But…but…I asked if I could sit out there even if there was no furniture.  After getting a puzzled look I was told that I could.  I took a quick look at the menu and was surprised to see that they sold beer other than the beer they brew so don’t let the craft beer craze scare you off.  I quickly collected the dogs and enjoyed a lovely ale while sitting on the floor of the patio.  I’m a country girl; sitting on concrete is no big deal.  We walked around the patio (and took a few photos) before heading out.  I had wanted to get some beer to take home but they only sold growlers and while I do like growlers, once they are open you have to finish them quickly and I’m just not prepared to make that kind of a commitment.  Onward puppies.

The mid-afternoon sleepies started to set in not long after we left the brewery and when I saw Stone Creek Coffee, I pulled right over and hustled my way in for a nice strong americano and berry muffin.  I took my snack outside and brought the dogs onto the patio which was set up like a little park.  Or it was a little park set up like a patio.  Either way it was nice and we wandered around for a few blocks.  I got really excited when we happened to walk past a brewery only to find out it wasn’t open until later.  Much later than I wanted to hang around.  Oh well.  We had a road to drive.

As we drove north, there was a decision that had to be made: do we continue up the peninsula that is Door County in Wisconsin or cut across the base of the peninsula and go to Green Bay for the night?  With the overnight weather being unpredictable, we were going to be in a hotel or motel either way.  I decided that we would take the scenic route and continue into Door County.

Fun fact: Lake Michigan is the fifth largest freshwater lake in the world and the third largest of the Great Lakes.

I was so glad that we did.  First of all, we found some terrific barbecue at The Swinery.  I ordered brisket and pulled pork and mac ‘n cheese and corn bread.  A picnic table outside provided the ideal place to give myself the meat sweats.  The owner even came out and gave the pups little cups of dessert which they demolished in no time flat.  I took the opportunity to ask him if there was anywhere that I could walk the dogs and he gave me directions to the beach in town before leaving me to the pile of food in front of me.  This was one of the few times that the meal was more than I could finish and I packed up the car and we drove north.  I’m sad to say that The Swinery has since shut down so we won’t be going back there anytime soon.

We drove into Kewaunee and happily I was able to find the beach.   Even more exciting was that no one was around.  Woohoo dogs, go have fun.  They ran, they splashed,  and they rolled until they were tired. Brushing the sand out of their coats, we continued the drive north. 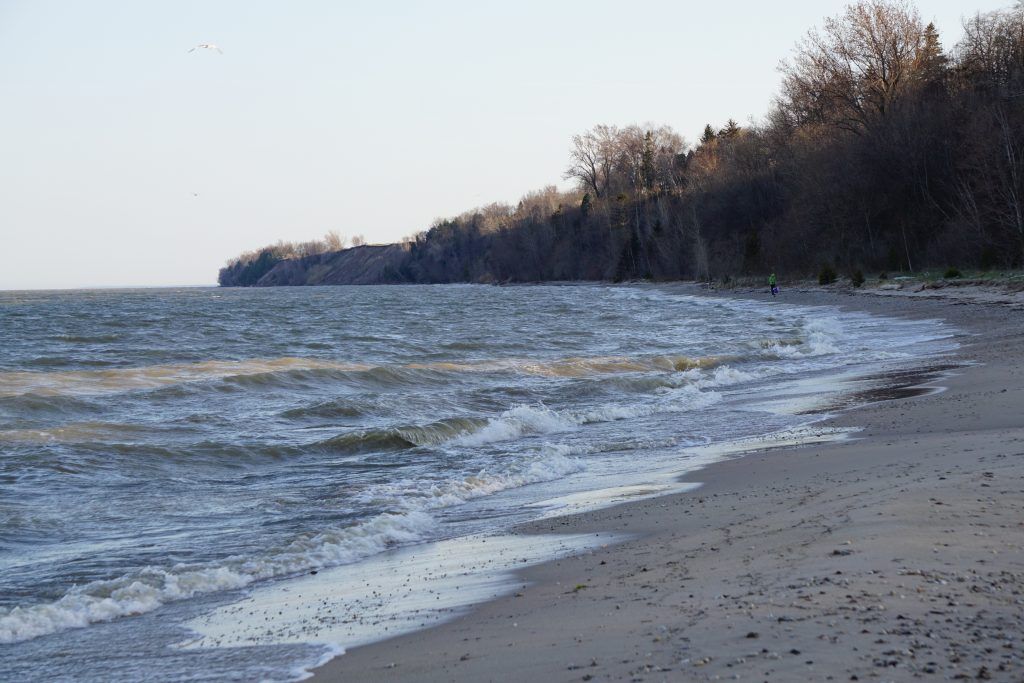 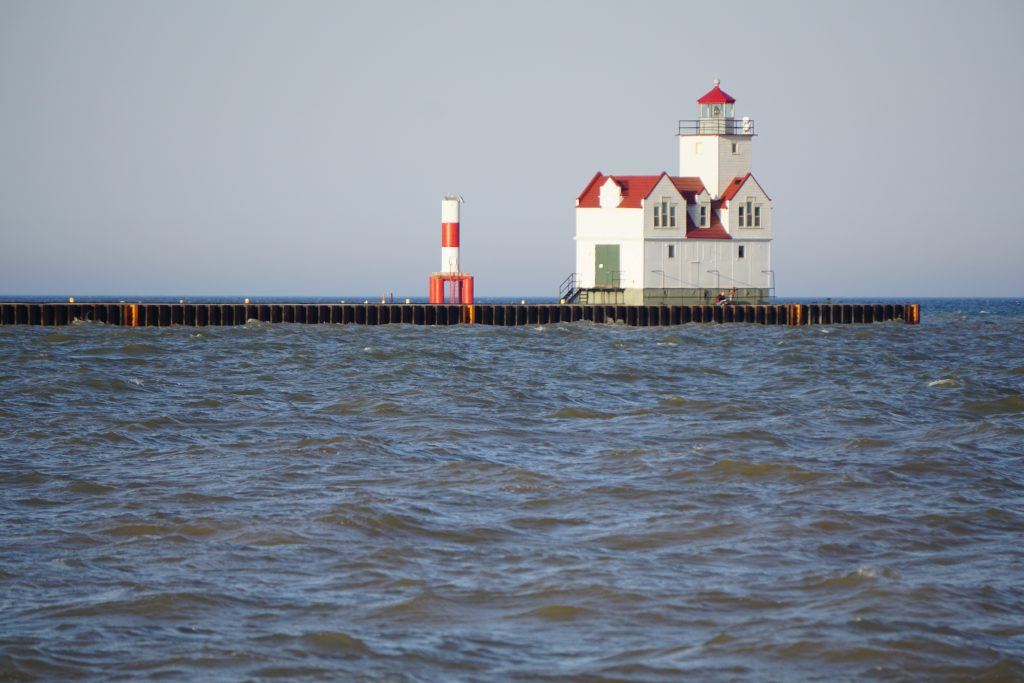 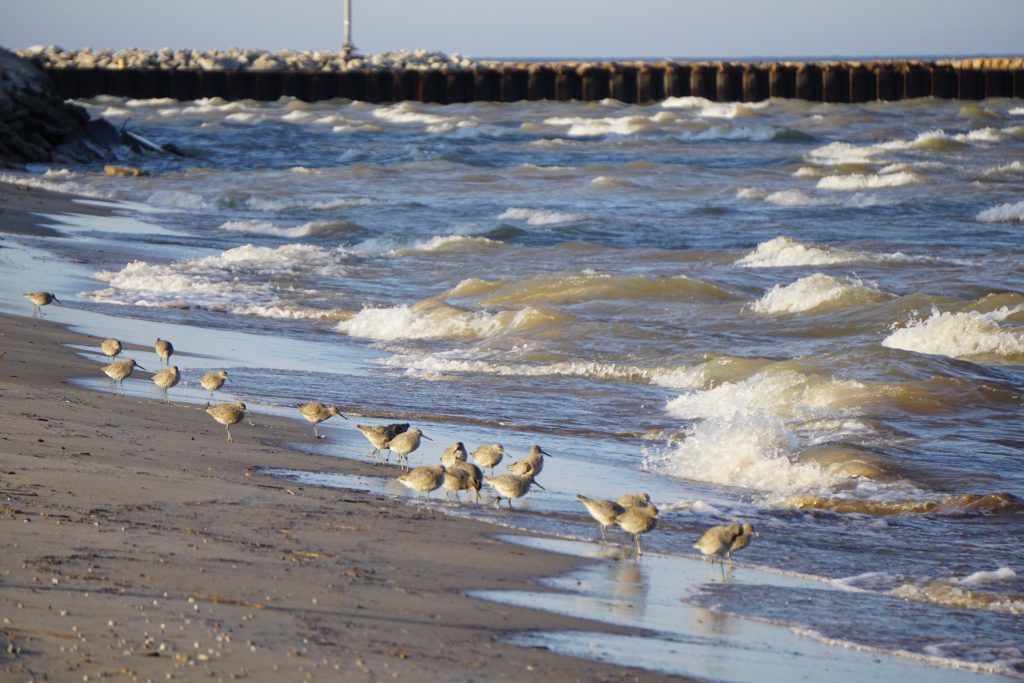 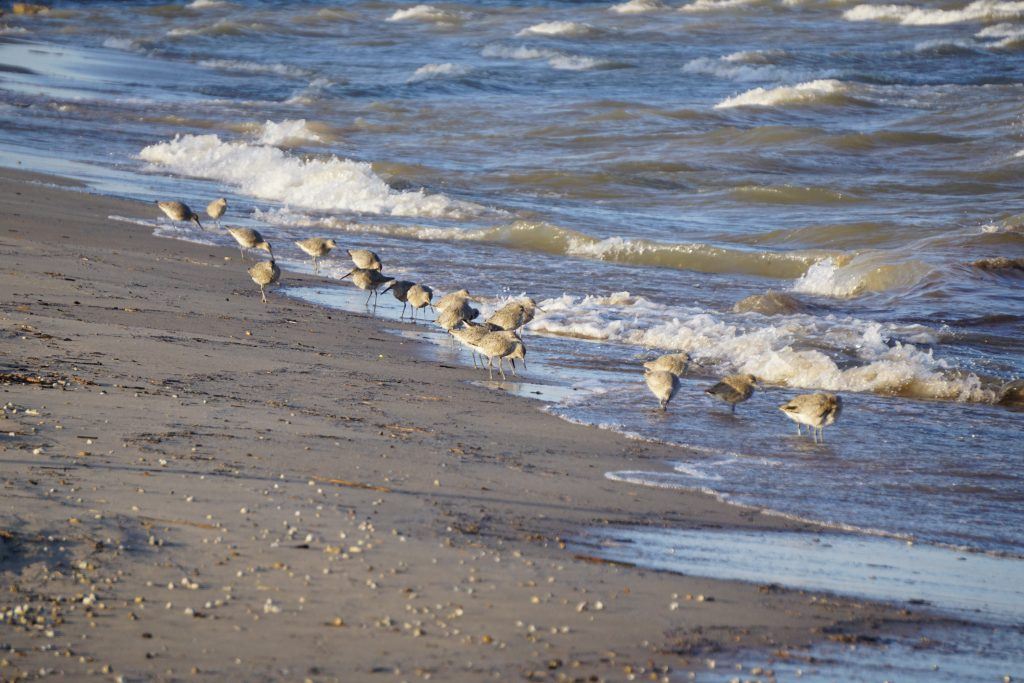 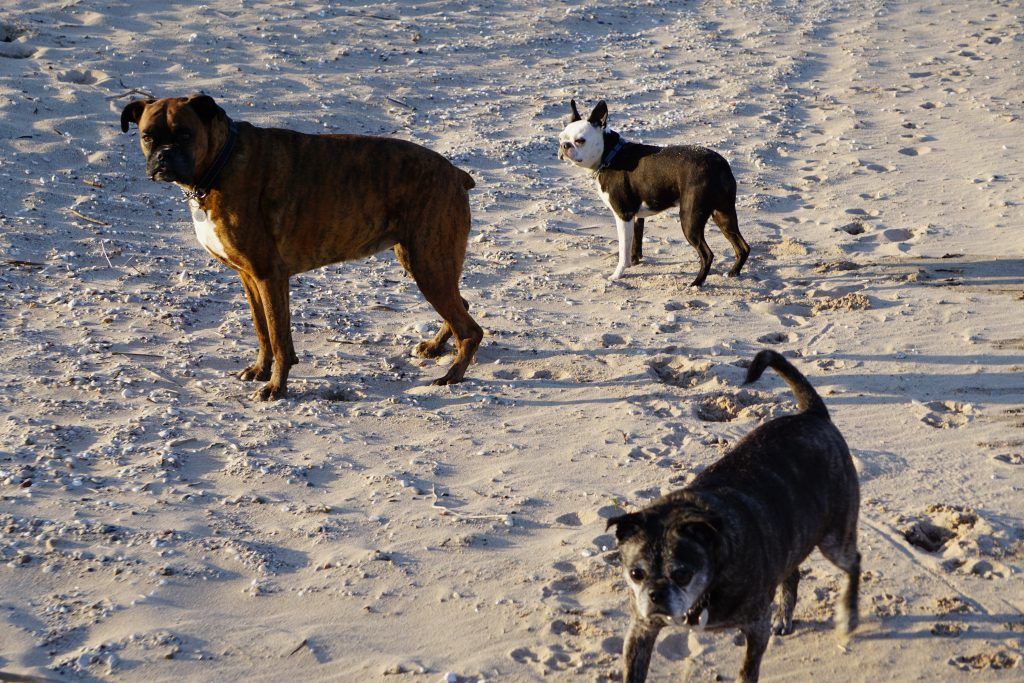 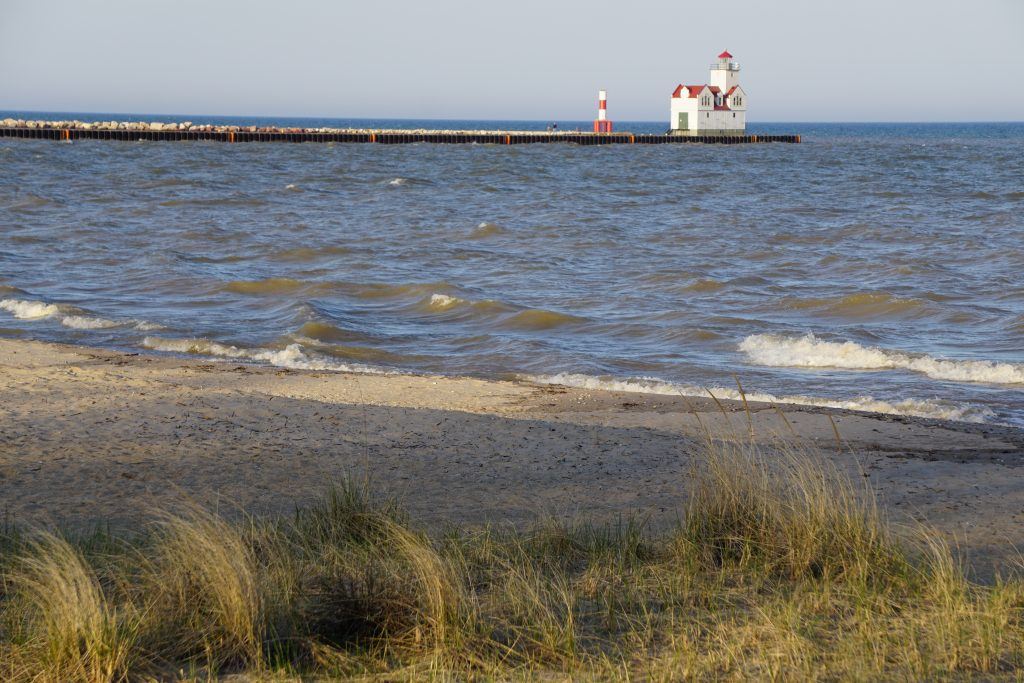 We stumbled onto Scenic Shore Inn as we drove into Algoma and luckily, they not only allow dogs but they also had a room available.  The room was comfortable and clean and we were all asleep in short order, wonderfully exhausted from the busy day.

Did you miss the start of this adventure?  Follow this link here to go back to the beginning.