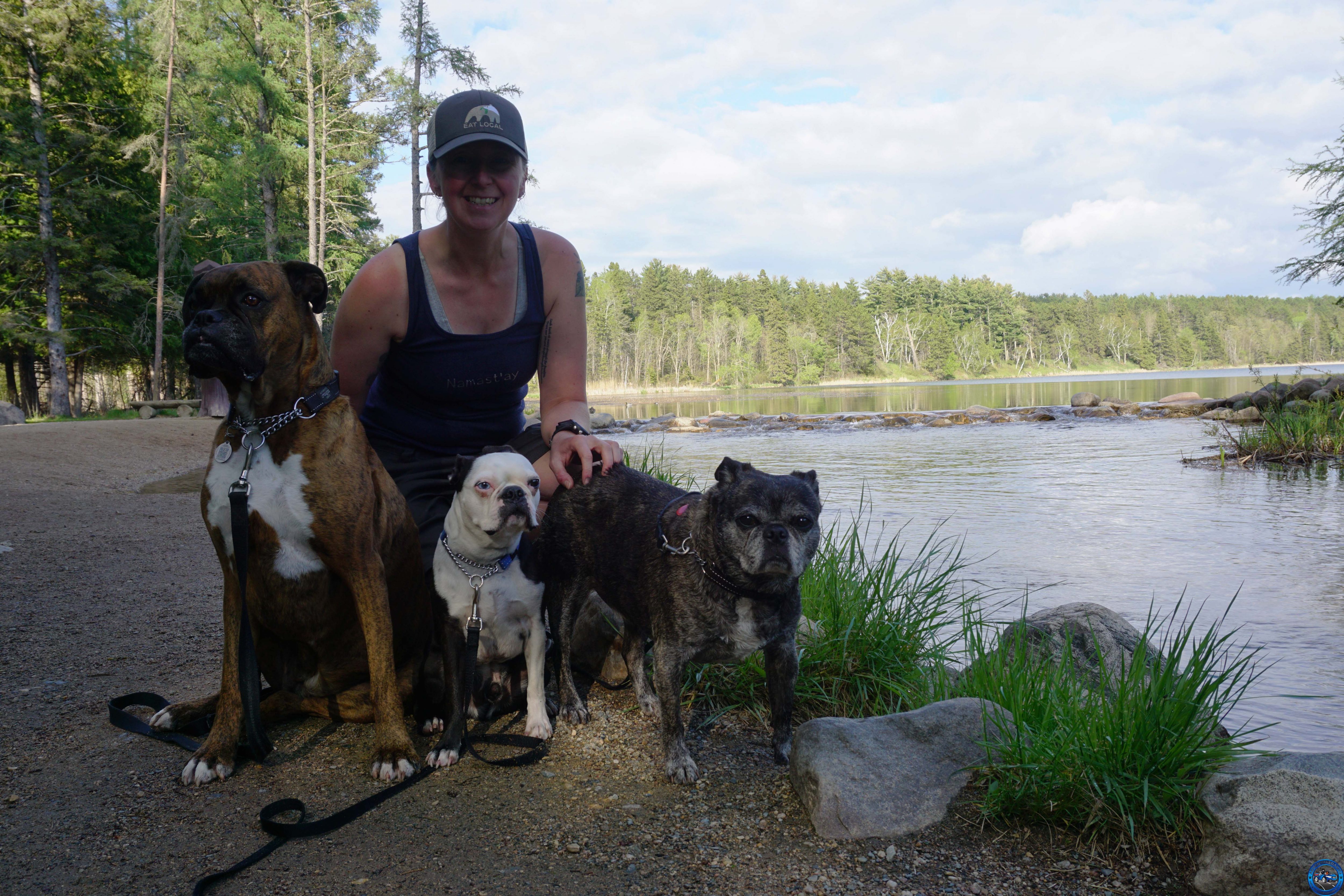 This trip was inspired by the second season of the television show “Feasting on Asphalt”.  We are following the Great River Road that runs along the Mississippi River from Venice, Louisiana to the headwaters in Itasca State Park, Minnesota.  When possible we will stop at locations featured in the show, however time has found many of them closed.

We woke to another grey, cool day and after a short walk and the dogs had their breakfast, we set out.  Fortunately the Daily Dose was close by and they did not mind me sitting outside on the patio with my dogs.  The americano was very good and the breakfast panini outstanding.  I even had a little treat of the chocolate caramel square after my breakfast which I ate in the car as the rain started to fall.

It seemed like we were chasing the clouds as we continued up the road as the sky wasn’t getting any brighter.  When I saw Cafe Pawz, well I thought I had hit the jackpot of dog-centric cafes.  And that I would be able to get another hit of caffeine with the mutts.  Nope.  There was a big sign on the door that said no pets.  Talk about mixed messages.  Turns out, the cafe is inside Becker Furniture World.  I guess the “pawz” is an homage to the hunting culture as there were plenty of stuffed animals around the store.  The coffee was good but the best part of the cafe were some of the stickers I saw there.  That and the fact that the women’s restroom is also a severe weather shelter.  That threw me for a bit of a loop.

The Great River Road became much more difficult to navigate as we drove through Minnesota since it wasn’t as well marked as it had been in other places and with the river getting smaller and all the lakes to detour, the road also winds a lot more.  I found myself backtracking and no doubt missing large sections so when I saw a visitor’s centre, I stopped in to try and get my bearings and give the dogs a stretch break.  Imagine my surprise when I saw a giant Paul Bunyan statue.  We went for a walk around the centre and took the obligatory photos before continuing on.

Finally I turned down the road for Itasca State Park.  As I was paying for a vehicle permit, I will admit that I was tempted to find a campsite but the wet weather that had been with us for the trip promised to stay with us for some time longer.  And it looked like the temperature was going to drop as well so with no places that I could find nearby, this was going to be a short visit for us.

I was surprised that we did not see anyone, not even other vehicles as we drove through the park.  We stopped at the Mary Gibbs Mississippi Headwaters Center to find that it was locked up; I guess we were visiting before the busy season and that was fine by me.  We set out down the short (800 yards) trail to the headwaters and saw a small statue called Heartwaters-Caretaker Woman.  It’s a beautiful brass sculpture of a woman releasing a basket of turtles.  I found this really interesting article about here.

The trail is short and very easy to hike and as you round a bend, the trees open up and the lake appears before you and to the right is a small rock dam with the beginnings of the Mississippi River.  The only indication of the significance of this spot is a sign carved into what had been a tree trunk.  Of course the webcam at the end of the trail kind of gives things away too.

We waded into the water and then when I stopped to take some pictures, I realized that I should have brought my tripod.  So we walked back to the car, got the tripod, and walked back to the lake.  And still, not a soul was seen.  There weren’t even any animals after we had scared off two ducks when we first arrived.

I stood in the middle of this unassuming stream and looked out over the lake to see ponderous clouds hanging in the sky.  Here I was, after how ever many days on the road, having driven the length of the legendary Mississippi River.  A Strong Brown God, Old Muddy, whatever you call it, it had been our companion and our destination.  A trip that I had waited a decade to take had finally been done.  I felt a touch of sadness and satisfaction all at the same time.  Then a wave of contentment washed over me as I watched the dogs splash around in the water.

Since there was nothing and no one to bother, I let the dogs have a little run.  Maybe it was because he hadn’t had much off-leash time or maybe because this place felt like home, for what ever reason, they had a blast running in and out of the water and chasing each other around.  Leo and Jack had a big wrestling match and even Piper got in on a game of chase.  I let them run until they all started to slow down and we made our way back to the car. 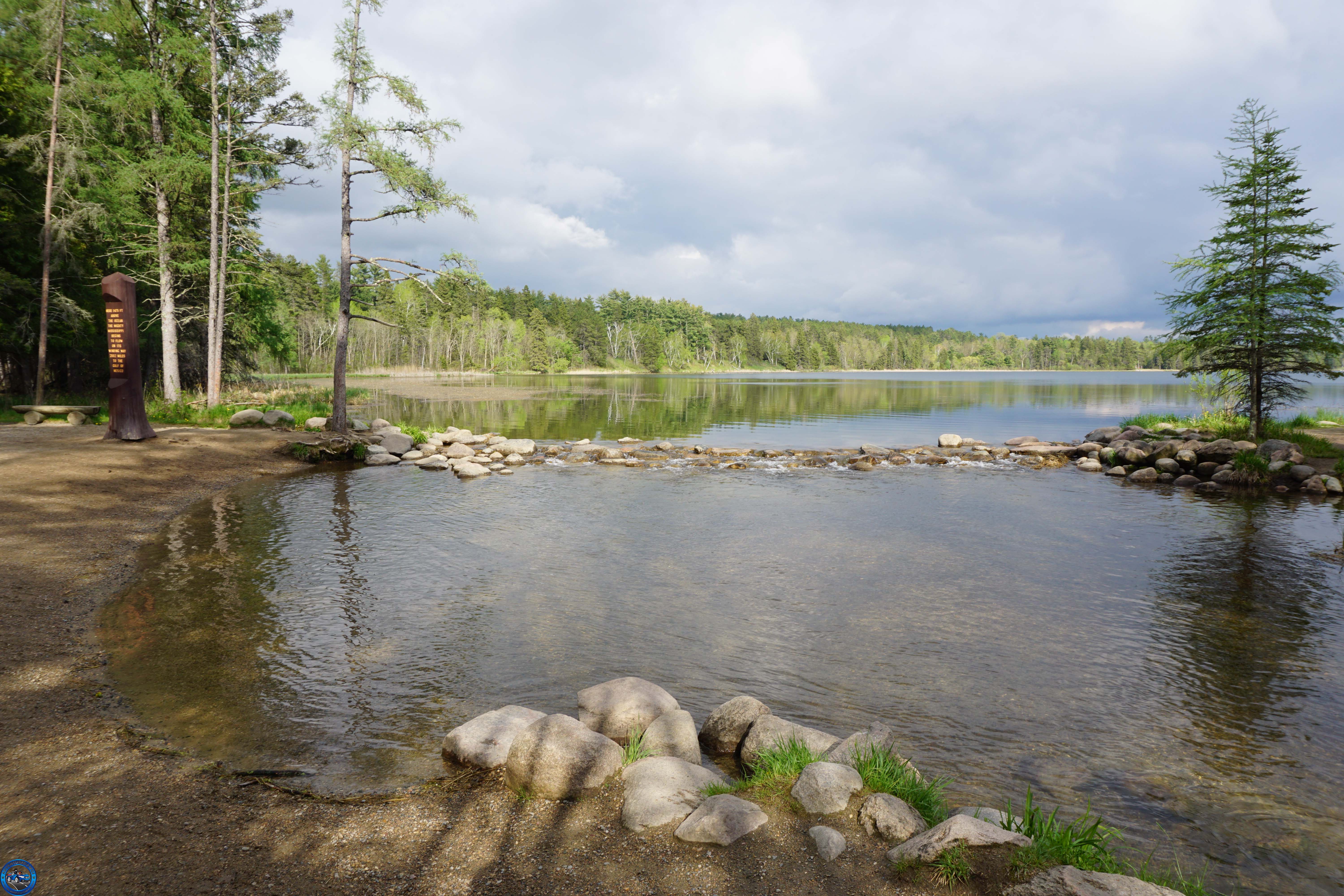 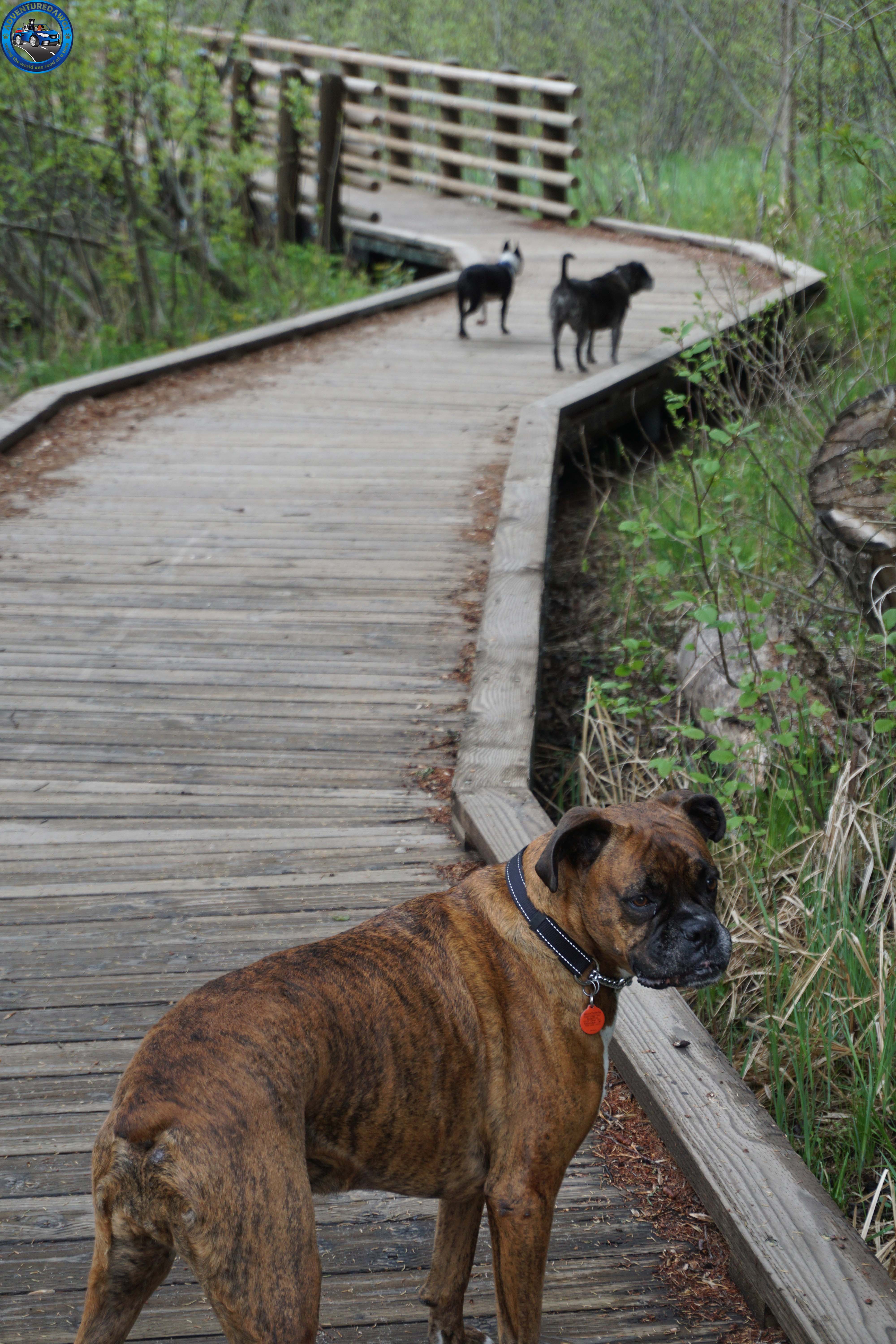 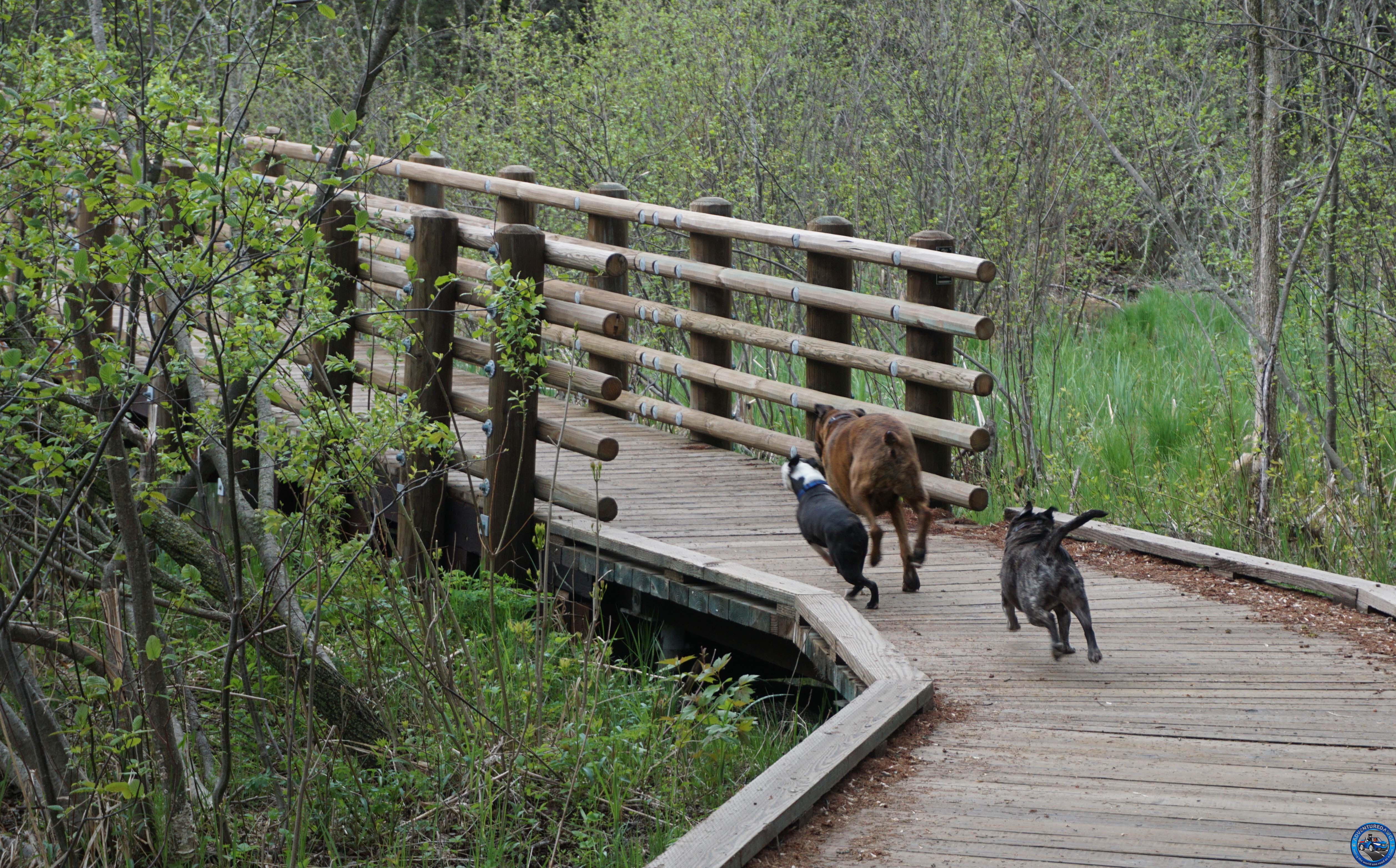 After a thorough towelling, they all started to jump back in the car.  Then as I was drying off Leo, I happened to notice something on his front leg.  Since that leg is white, it shows up really well if something doesn’t belong.  Like a tick.  Like two GIANT ticks and I picked them both off as fast as I could.  They hadn’t started feeding yet and just looked like they were trying to find a good place to dine (shudder).  I looked over the other dogs and didn’t see anything on them.  And these ticks were big enough, I’m sure I would have seen them easily.

The drive to my grandparents was relatively uneventful.  Figuring out where I was going was a bit problematic as the cell signal was really weak so I just started heading in a generally north direction until I was finally able to get a signal.

When I got to Rousseau, I knew that the border was close and then I had a moment of panic.  This crossing is a small one and I wasn’t sure what the hours were since it was starting to get dark.  Fortunately, it was open until midnight so I was lucky that way.  I drove up to what almost amounts to a shack and waited as the border guard came up to my passenger window.  He was really pleasant but he seemed to have a hard time understanding why someone from Ontario would be coming up from Louisiana to go home back to Ontario via Manitoba.  I explained the trip to him a few times but he seemed to have a hard time believing me.  And I maaaaaaaay not have been as good with keeping receipts as I usually am so there maaaaaaaaaaaay have been a few things that I didn’t declare because I had totally forgotten them.  Like peach salsa.  And cider.  And root beer.  And wine.  Then I told him I was going to visit my grandparents and told him where they live and that seemed to clear everything up.   In short order, we were continuing north.

Here’s the thing with southern Manitoba: there are a lot of deer.  And I do mean A LOT.  I cannot remember how many I saw on the side of the road and I was on edge the entire time, pretty much until I parked at the cottage.  Grandma was still up so the dogs were able to get their snuggles, and I ate a very late dinner before we collapsed into bed.  Unfortunately I always get put in the room with two twin beds and the dogs seem to think that they need to be in the same bed as me.  So either I end up twisted and stuck against the wall or I move to the other bed and then have at least one dog and sometimes all of them follow me.  Of course sometimes I wake up to look across the room and see Piper sprawled out in her own bed.  This time, all three of them had to squeeze onto the bed and I was surrounded by the sound of deep breathing as I fell asleep.