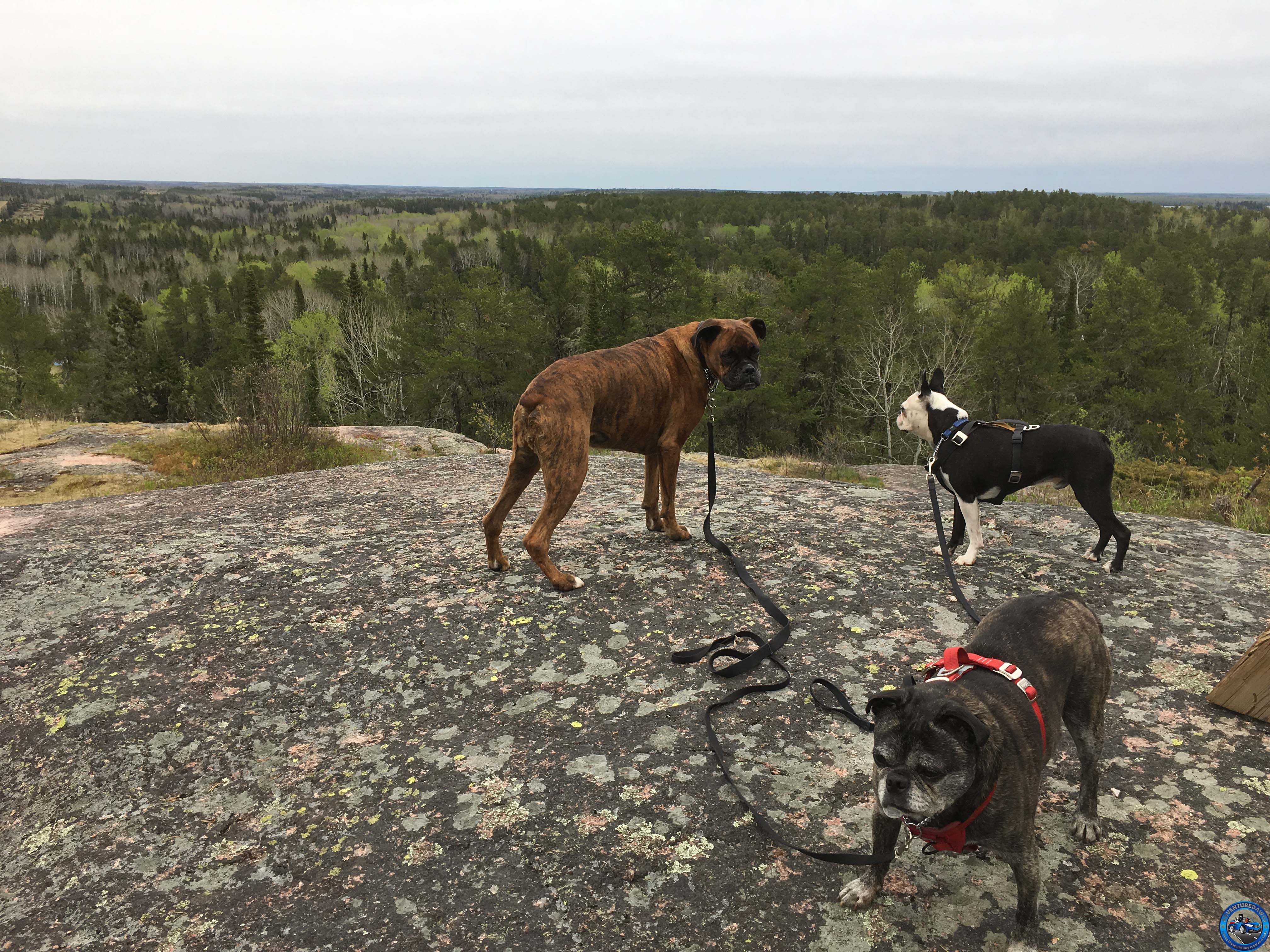 I took the opportunity to relax after the constant travelling of the previous days.  Since I usually go later in the season, all of the work preparing the cottage is done before I arrive.  I half expected to be putting long hours helping to get the cottage ready for the summer but fortunately I had arrived too early.  Darn.  So I had a few days to do nothing at all.  The boys “helped” grandpa as he puttered around and if grandma sat on the couch, well Piper was right there with her.

Since my grandparents live so close to the Canada/U.S. border, they do the majority of their shopping in Rousseau, Minnesota.  A couple days after I arrived, grandpa went to buy some groceries and came back with an interesting story that the border guards told him: a car with Ontario plates had some crazy story about driving up from Louisiana and going back to Ontario.  Apparently they thought they had a real live wire of a car and that something was being smuggled because the story just didn’t make sense.  Until the driver mentioned where they were going.  I had no idea I had caused such a stir but I’m glad that I gave some folks some entertainment.  I know that they had told my grandpa this because he told me parts of the conversation that I hadn’t told them about.

Soon enough, the rest was over and it was time to return to real life.  I packed up the car, said goodbye to my grandparents, and we hit the road.  We weren’t on the road long before I decided I needed something to eat.  Not quite sure why, I just did.  So we stopped at Nite Hawk Cafe in Whiteshell Provincial Park.  I ordered a cup of coffee and the buffalo chicken wrap which came with fries.  The wrap was really good with enough spice from Frank’s Red Hot to just balance out the twang of blue cheese.  After the food, we took a much deserved walk through a trail that starts at the parking lot.  When the footing started to get really sludgey, we turned around and got back in the car.

Normally when I start to feel the mid-drive slump around Vermilion Bay, I stop at the Comfort Table Bakery but this time the neighbouring Fort Vermilion was open.  My eye was caught by the signs that said “dog-friendly”.  Well we had to check out what that means.  True to it’s name it is built exactly like a fort, complete with a wooden palisade  There is a cafe and a gift shop and places to sit inside as well as a covered patio.  There’s also a playground inside so it’s a great spot to stop for kids to burn off some pent up energy.  The dogs were allowed inside the fort but not inside the buildings.  But they do have trails that lead out of the back of the fort so we took the opportunity to go for a stretch and burn off our pent up energy.  The terrain was just rough enough to be interesting but did not require huge feats of athleticism.  It’s a nice place to stop if you’re passing through, especially if you have children.

I had foolishly hoped that we would be able to camp but more rain and falling temperatures dashed any chances of that happening.  I was able to get a room at Voyageur Motel and even though it’s not in the nicest part of Thunder Bay, it was clean and served our purposes just fine.  The only complaint that I had was that the walls seemed to be a bit thin.  I heard some, shall we say, unusual sounds when we were getting settled and seeing Piper looking in the same direction, I obviously wasn’t hearing things.  Part of me wanted to go banging on their door and either ask to turn the volume down on what sounded like an adult movie or find the woman who sounded like she was starring in said movie and tell her that if he was really worth the noise, they’d have been done by now.

When I woke up the next day, it was raining even harder than it had been the day before.  The drive between the Thunder Bay and home can be done in either one long drive or over two days.  I figured that since the weather was so yucky, I would try and do it in one unless we were able to get away from the clouds that seemed intent on following us.

I drove around Thunder Bay looking for a place to get breakfast but since it was a Monday, most places were locked up.  I was going to eat at a place that was highly recommended called Hoito but the line of people told me it wasn’t going to be a quick stop and with the rain continuing to fall, I’d be stuck either leaving the dogs in the car or eating in the car.  Luckily there was a cafe just up the street called Calico Coffeehouse.  It’s a really cute space and the morning glory muffin was outstanding with a good americano to wash it all down.

Aside from a few short walks in the break in the rain, we stayed in the car.  I did see a moose on the side of the road and stopped to take a photo and hopefully scare it away from the road.  Yes you read that right: I wanted to scare it away from the road.  Highway 17 is a major road and the thought of the moose wandering in front of a car had me scared.  Fortunately my little car standing on the shoulder seemed to make it wander farther into the bush. 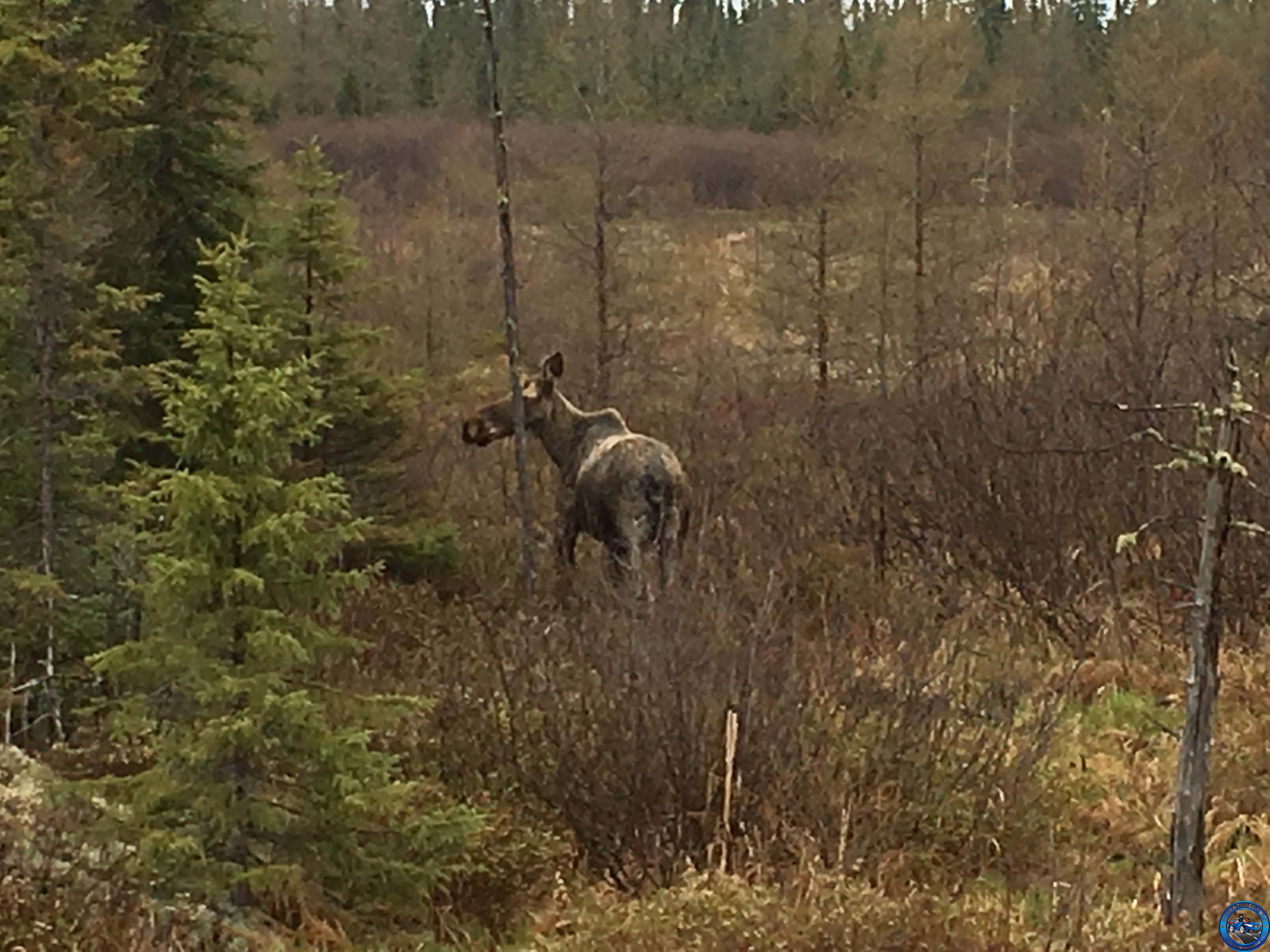 I had to stop for gas in Wawa and that was when I realized that I had never seen the Canada Goose in Wawa.  It’s a large statue of a Canada Goose at the visitors centre as you drive into town.  I’m not going to lie: the thing creeped me out a bit.  I think it’s the eyes.  But then we stopped at Mina’s Kitchen, a trailer on the side of the road.  I ordered the burger with bacon and cheese and fries.  They were very good.  It helped to get over the goose’s creepy factor.

Finally the rain stopped and I pulled off the highway to let the dogs run along the shore of Lake Superior.  Even though it was mid-May, there were still piles of snow in the shady spots.  I was engrossed with trying to climb some rocks when I happened to look behind me and saw an older gentleman with his dog.  I was somewhat stumped.  I mean, there were plenty of places for him to stop and he happened to stop right where I was to let his dog out.  And seeing as his dog wasn’t the friendliest, I couldn’t figure it out.  Unless he was just looking for someone to talk to.  We exchanged pleasantries and then we climbed back into the car. 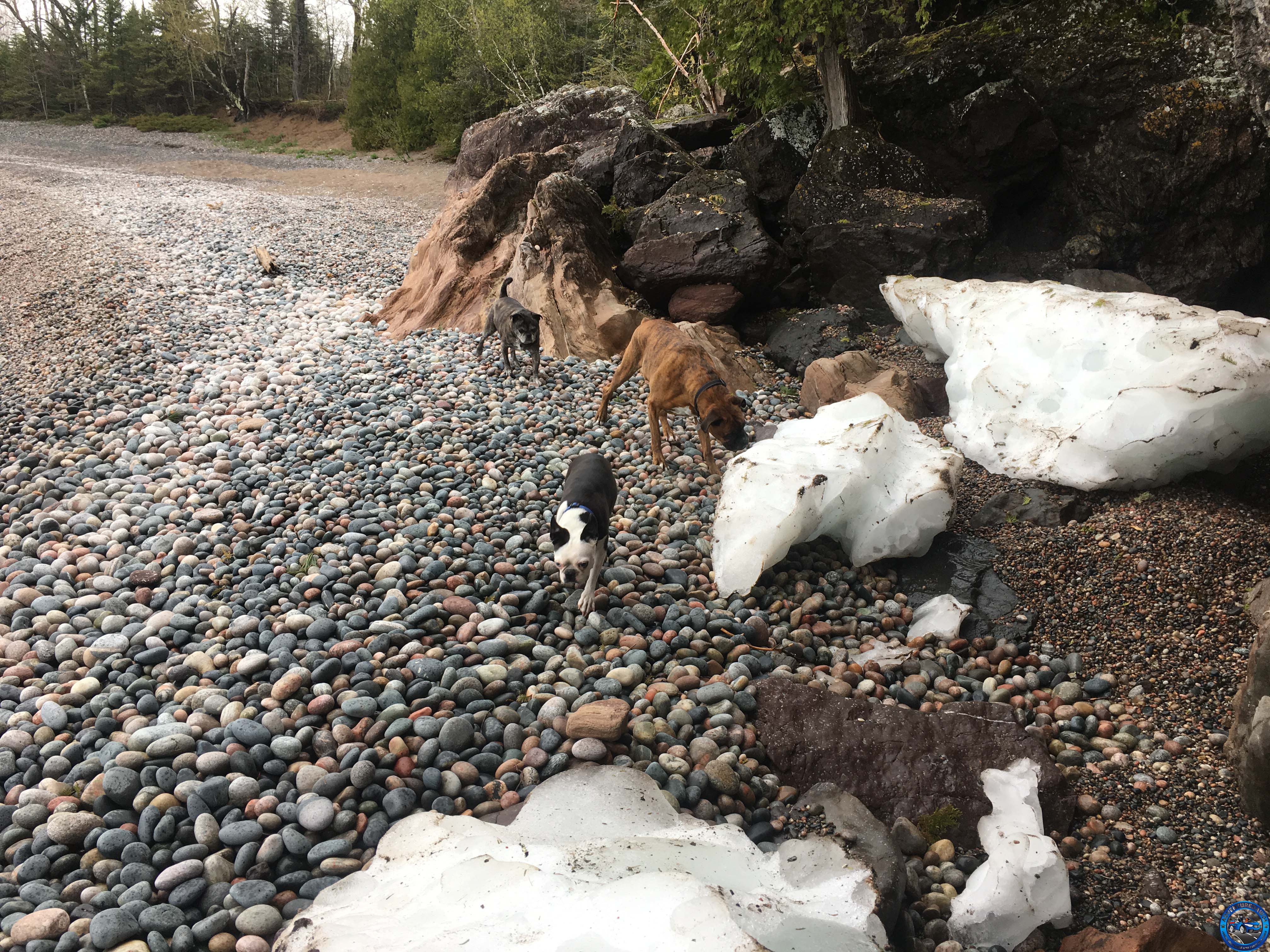 And then as we were passing through Sault Ste. Marie, I saw three giant cows.  Yes giant cows.  And a sign that said “Holy Cow’s Ice Cream”.  You know I stopped.  And you know I left with an ice cream cone of chocolate peanut butter and salted caramel.  After that was the long push home.

You know when you’re getting close to your destination and you just want to get there so you don’t stop (because you’re full of ice creamy goodness) except for gas and pee breaks?  That was the last bit of this trip.

At 1:25 am we arrived home after driving 9093.2 km.  As one person put it, the ending was bittersweet.  I was glad to be home and glad that we had arrived safely.  I was glad that we have been able to share this trip.  But there’s always that bit of sadness that comes with the end of each trip.

And even though the inspiration had been “Feasting on Asphalt”, I was happy that I hadn’t re-created the trip, that I had found different places, walked different trails.  Even with the ticks and the rain and the flooding and the nights spent in the car, it was a trip that can only be described as epic.

Oh speaking of ticks, don’t think that I escape completely unscathed.  I thought I had managed to avoid all ill-effects since the heads of the ticks were so tiny.  Well I was wrong.  Little red marks soon turned into small itchy swellings.  There’s nothing quite like sitting in your chair at work and trying to scratch a tick bite on your backside and hip.  I must have looked like a dog scooting my butt in the chair.  It does make for some interesting conversations with co-workers that’s for sure.