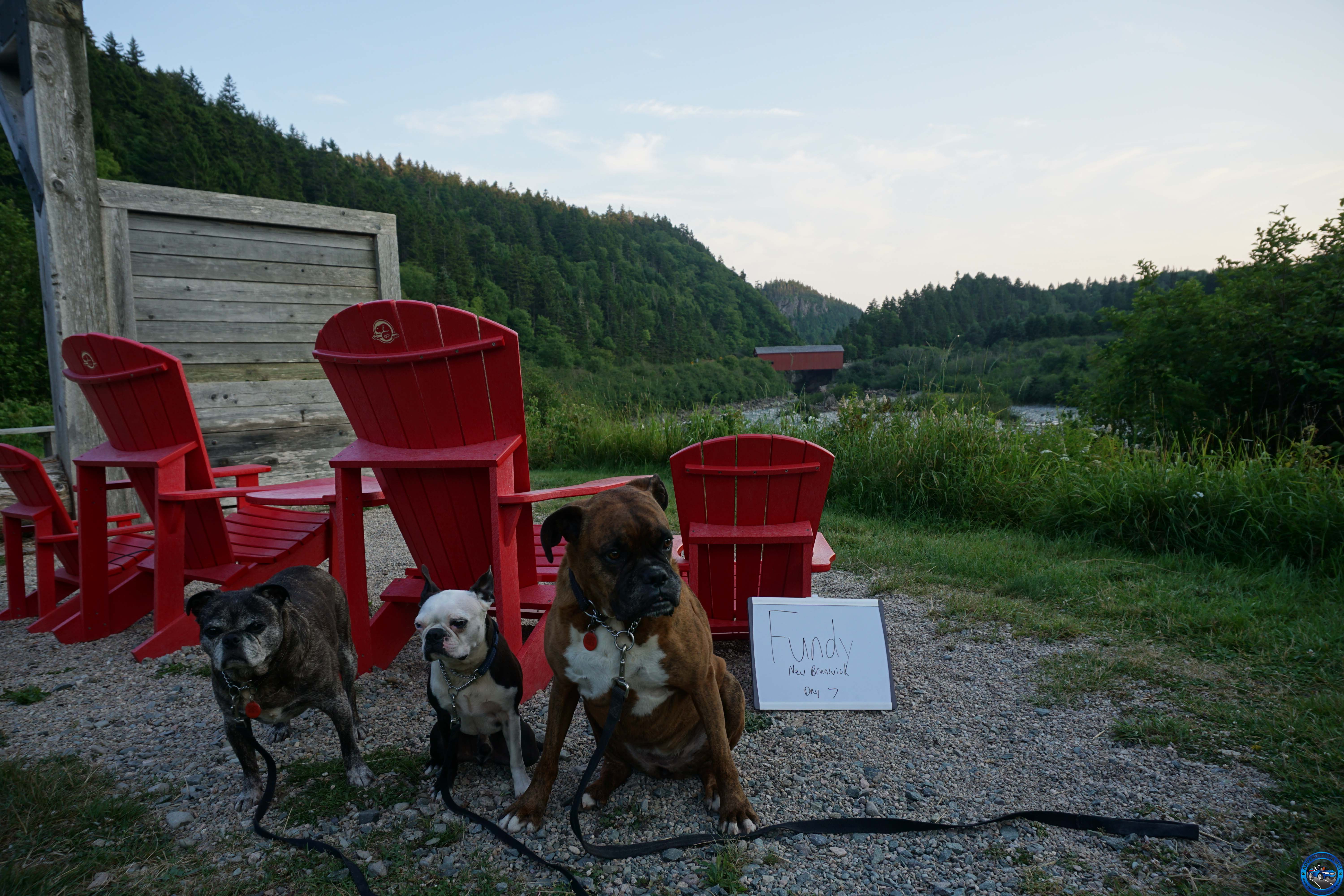 I actually slept until the alarm went off and then I *gasp* fell back asleep for another hour.  We went for a short walk around the campground and packed up camp.  Keji was a surprising find and I would have liked to stay longer and explore more but alas, the road needed to be driven.  We stopped on the way out of the park for another short walk at Mills Falls Trail, took some photos (naturally), and continued on.  I think the dogs would have been happy to explore a little more.  Jack especially is drawn to running water and as we looked over the falls, he was transfixed by the sight below him.  If we are ever lost somewhere and need to find water, I would just let him go because he will always find it.

As we had started out late, I had missed breakfast when we stopped at Middletown Sweets.  The spicy chicken sandwich seemed to be calling me from the menu board instead.  As the woman was making my sandwich, I was eyeing the selection of baked goods and couldn’t resist asking what she recommended.  Well she told me the cinnamon roll was really popular and the butter tarts are amazing.  How ever would I decide?  So I didn’t and got one of each.  The sandwich?  In-freaking-credible.  The brown bread was so soft is was almost too soft and had so much flavour packed into it.  The chicken was spicy without being overpowering and my addition of alfalfa sprouts sent the sandwich over the top.  If you are in Middletown, stop for the sandwich.  You will not regret it.  Actually scratch that: get the sandwich and BUY a loaf of the brown bread.  The butter tart was pretty good but not the best I have ever had.  Considering I once drove an hour to a butter tart festival and ate way too many butter tarts (read about that here), I consider myself something of a butter tart snob.  The cinnamon roll more than made up for the tart.

I decided to skip the ferry west and instead drove around the Bay of Fundy.  Yes the ferry likely would have been quicker but then I would have missed seeing so much of the coastline.  And isn’t that part of the road trip experience?  It also gave me time to think about whether I wanted to stop and see the Hopewell Rocks.  Part of me really wanted to because I hadn’t seen them before.  Part of me didn’t because they would likely be busy with people and it would take time out of an already strapped-for-time schedule.  After humming and hawing for a few hours, I decided to skip the Hopewell Rocks and drive straight to Fundy National Park.

As soon as we arrived at the park, I went to find a site and we were just able to get one of the last sites at Point Wolfe Campground.  It was kind of a weird site because you had to park on the road since there was a really sharp incline on what would have been the drive way.  I may have bottomed out my car before I figured that part out.  Whoops.  I put the tie-out around the picnic table, put the water bowl down, and then went to get the dogs.  I basically opened  the door and walked them up to the site.  They each had a drink and then flopped over on the grass.  I looked at the tie-out in my hands, looked at each of them, and then dropped the tie-out and started to set up camp.  They had not had much exercise besides a few pee breaks and yet they were all content to lay down in the shade or sun.  OK then.

Once I set up camp, I was able to drag the dogs (figuratively) back into the car and we drove into Alma for a late lunch; after a walk on the beach of course.  The Bay of Fundy has the highest tides and when we were there, the tide was going out which left a large expanse of rocky beach exposed.  As a side note: the tides rise by as much as 12 metres (40 feet) or more. 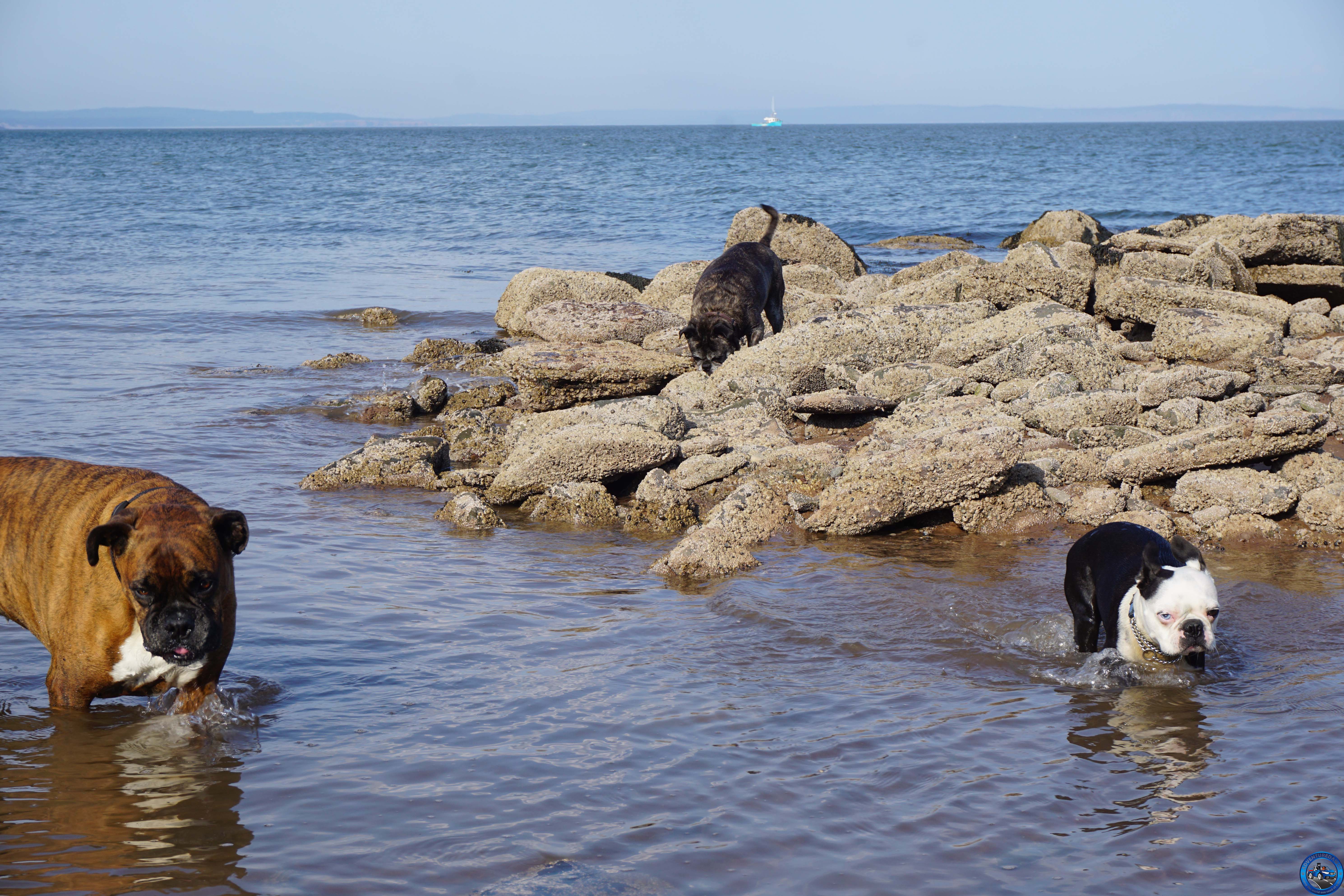 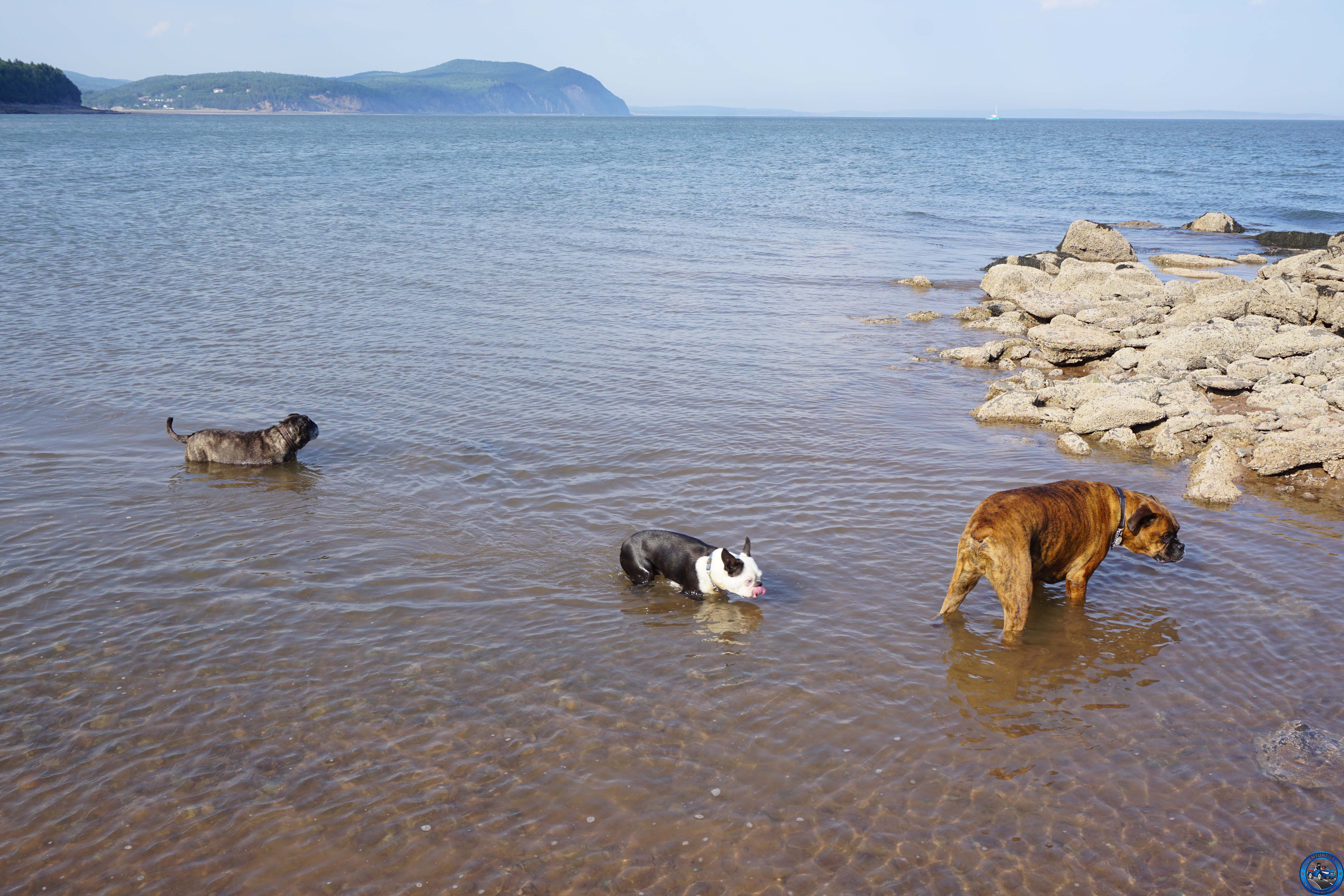 We stopped at Fundy Take-out which is literally right outside the gate for the park. It doesn’t get much more convenient than that.  There is an option to eat inside but since my traveling companions cannot go in, I stay out.  I ordered the lobster roll and pretty much didn’t come up for air until it was all gone. So. Much. Lobster.

Feeling the need to work off the seafood, we headed back into the park and stopped at Herring Cove Beach for a walk.  It’s a pretty loop trail that starts with a winding dirt trail to the beach and then stairs back up to the parking lot.  Now once I looked around at a wide expanse of rocky shore and saw that we were the only living things around in view, I maaaaaaay have unclipped the leashes and let the dogs stretch their legs.  They did play in the water a little but then they were content to sniff around before making themselves comfy in the sun.  It never ceases to amaze me that they can sit in a car for most of the day and then be totally relaxed when they have the chance to run around around.  I’m guessing the mental excitement helps to keep them calm. 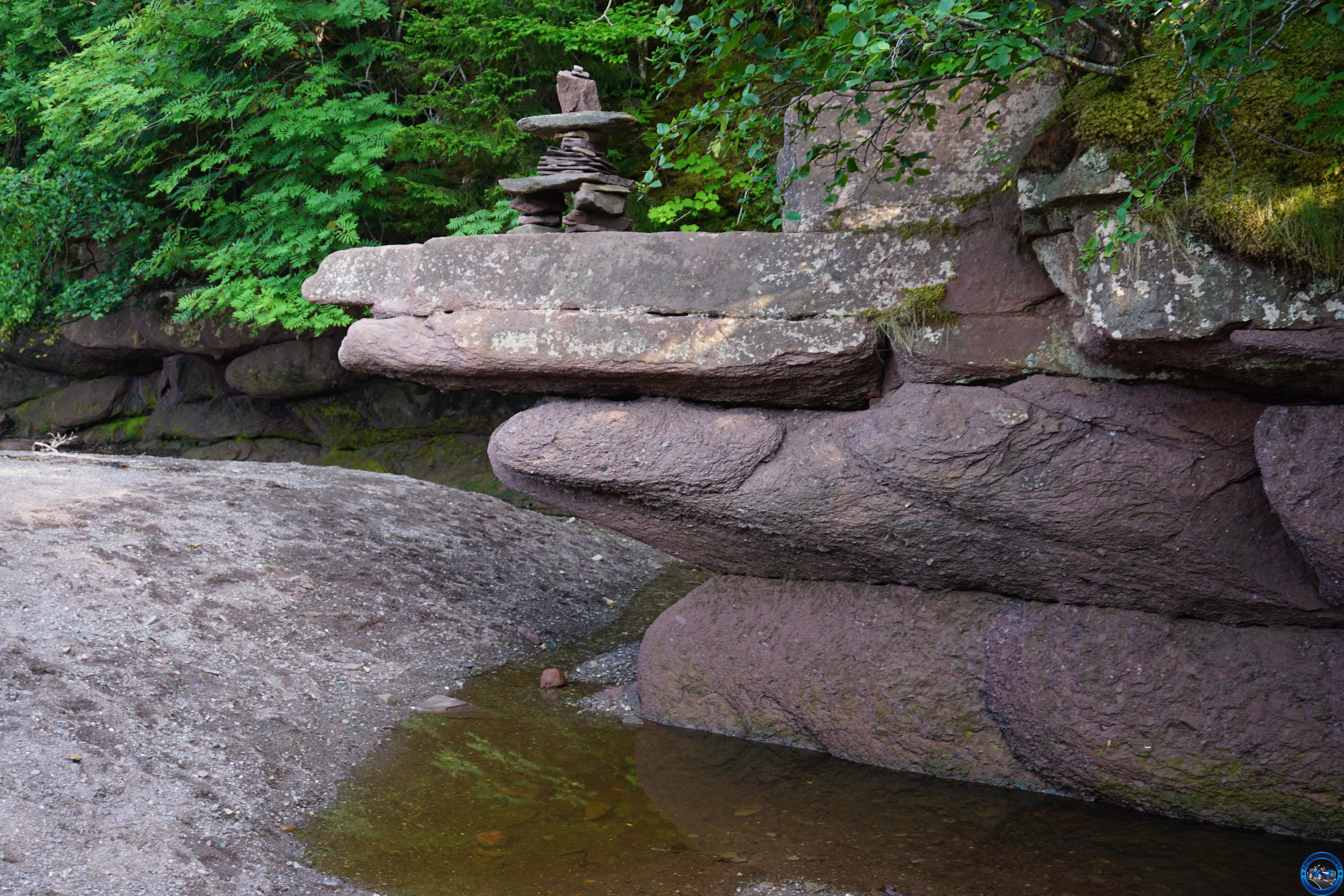 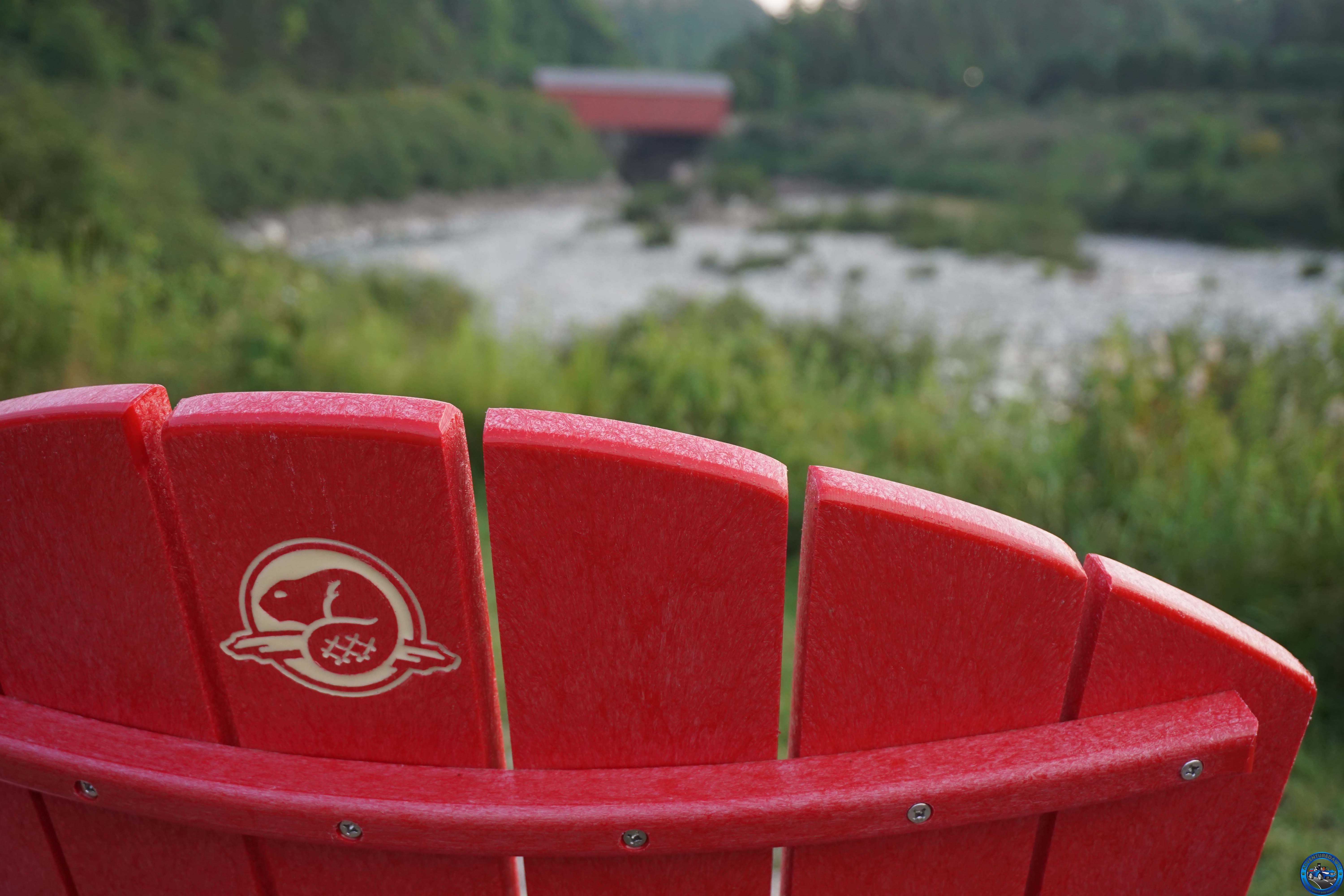 We went back into Alma and I decided to try the Tipsy Tail for dinner.  When I asked if dogs were allowed on the patio, the response was “are the tame?”  I almost laughed out loud when I replied that they are very good on patios.  The hostess went to check with the neighbouring tables before she escorted us in.  We sat down and the dogs sprawled out around me.  I know I’ve used that phrase before but what other way does one describe dogs spread out on the floor around you?  I asked what was good here and after getting the “everything” response, I was told that they are known for their lobster mac ’n cheese.  I ordered that and almost immediately regretted it.  It came and it was good but when I saw someone else with a lobster dinner…oh well.  As far as my dinner, I likely wouldn’t order it again.  It’s not that it was bad; in fact it was quite good.  I just feel like I wasted a Maritime experience with something I could have gotten back home.  As we sat on the patio, we watched boats coming in to the dock and a small crowd on hand to meet them.  It’s interesting to see the mix of a working industry and tourism blending so seamlessly.

We went back to our site as it was getting dark, and as we passed through the gate I decided that I wanted a fire.  I don’t know why, I just did.  So I bought a bag of firewood and we sat around to watch the fire.  Even Piper seemed to enjoy it, since she sat nice and close instead of trying to sneak into the tent.

Highway 114 runs almost directly through the middle of the park.  The Visitor’s Centre is on the east side of the park just outside of Alma.

You will need at least a day to fully appreciate the dramatic change in the tides.  You can watch the tides from the comfort of a patio or motel room in Alma if you don’t feel like parking on the beach.  The tide schedule is posted online.  Ain’t technology great sometimes?

There are serviced, unserviced, and backcountry camping sites, yurts and oTENTiks, and even chalets in the park.

Over 100 km of trails wind through the park for hiking or mountain biking.  If that’s not your thing, this park sports a golf course, heated saltwater pool, and equipment rentals if you want to canoe, kayak, or play tennis or lawn bowling.  There are also tours and excursions from Alma.

SEAFOOD and lots of it.  You can walk to Alma from the park which means that you can work up an appetite and work off the gluttony easily enough.  I’ve eaten at several restaurants in Alma and they were all very good.