We Got Cursed at by a Bird 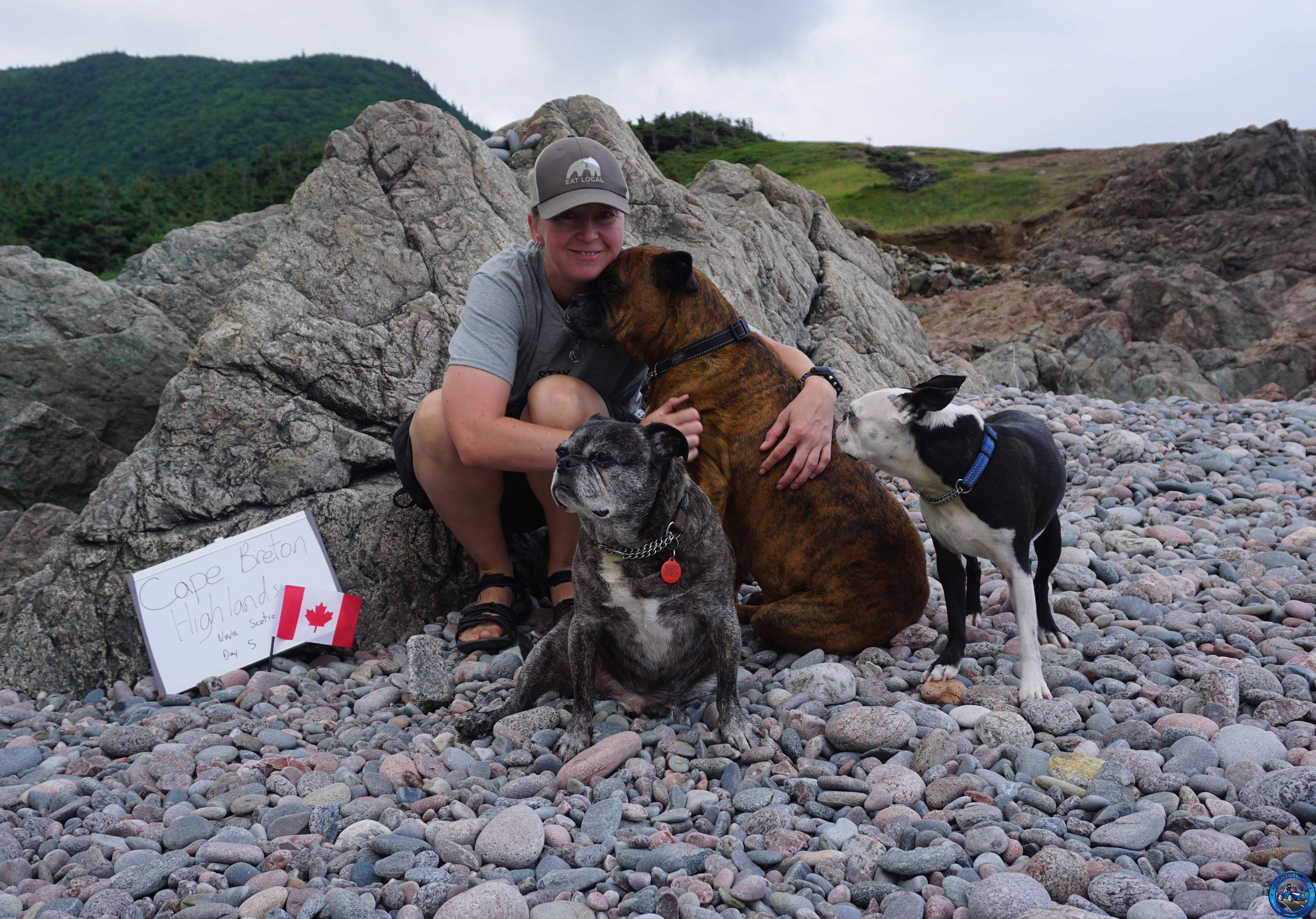 It seems to be such a recurring theme this trip: that we were awake before anyone else.  This is such an anomaly from our regular lives when I’m quite happy to get up at the crack of noon.

I took advantage of being the only ones awake to take the dogs down to the rocky beach.  The clouds seemed to be hanging quite low so I wasn’t sure about more rain but it certainly provided some wonderful lighting so I was merrily snapping photos.  I had the dogs sitting with their sign and was backing up to get the shot.  One more step.  Almost have it framed up….I apparently forgot that there was something of a ledge of rock and literally backed my way to the edge and slid down the bank of rocks.  When I stopped sliding I looked around and was even MORE thankful that we were alone.  Needless to say, I was much more careful with the rest of our little photoshoot.  I had forgotten the remote for my camera so I set my timer to grab some pack photos.  Well the last one, as I crouched down next to Piper, she leaned in and tucked her head against my neck for a hug.  She is such a momma’s girl.  We wandered up and down the beach for a little bit but since Jack doesn’t like the unstable surface and the road was calling, we headed out after everyone had splashed in the water, and sniffed the rocks, and peed on EVERY pile of seaweed.

We went back to our site and had it all packed up by the time a few of our neighbours emerged from their tents.  We had a long trip ahead of us and turned southbound out of the park.  We did stop at Aucoin Boulangerie.  Now I had planned to just get a little snack buuut the wall o’ baked goods was just too yummy to resist and I left with a blueberry scone, a raspberry scone, and a cinnamon bun.  Oh and a coffee of course.  As we drove, I reached onto the bag on the seat next to me and randomly pulled out a snack.  Oh goody a raspberry scone.  Don’t mind if I do.  It was so tasty that I found myself rooting around for the blueberry scone.  The coffee was pretty good too.

Now I don’t know about other places, but it seems fairly consistent that in Canada summer is constructions season.  There was So.  Much.  Construction.  Wow.  As I was cursing my choice of roads just outside of Halifax, I looked and saw a food truck parked to my right.  I had nothing else planned so I pulled into the the lot and strolled up to Nana’s Food Truck.  Fish and chips jumped right out at me so that was going to be my lunch.  I brought the dogs out for a walk but they seemed more interested in making friends with Nana when she came out of the truck with my, er I mean, our lunch.  We sat and talked for a while as I shovelled food into my face and she snuggled with the pups.  She asked if I was going to Peggy’s Cove since we were so close.  I had no idea that one of the biggest tourist draws of Nova Scotia was just 30 minutes away.  Of course we were going. 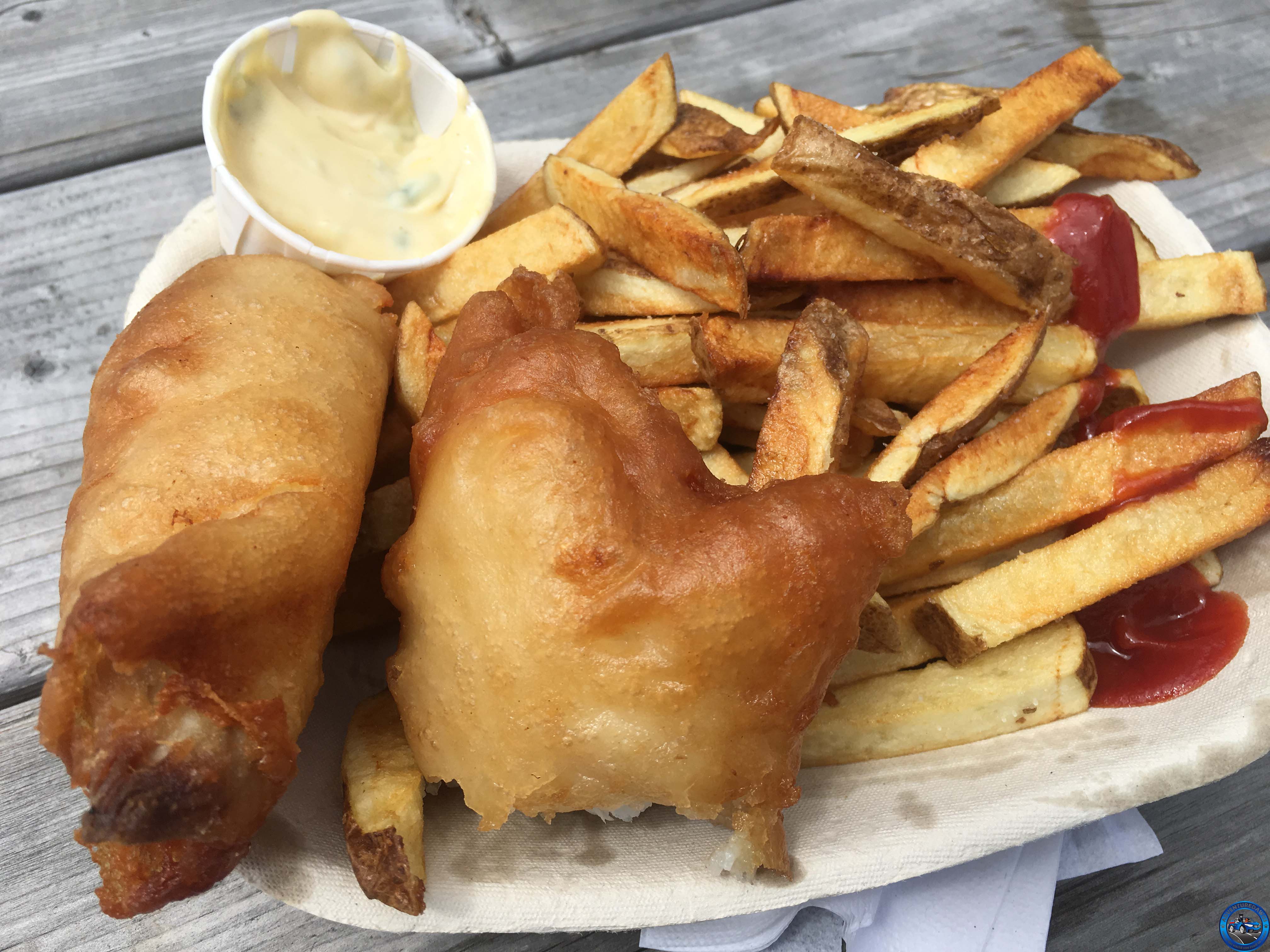 As we turned off the main road, I saw a store that had a sign for coffee.  Seemed like a good place to stop.  Well when I strode in and pronounced that I needed caffeine, they told me they only had bags.  Oh darn.  I left with a bag of locally roasted ground coffee and continued along highway 333.  The road winds along the coast and is a nice drive, especially after the re-bloody-diculous traffic we had been through.  Then we came to the turn to drive into Peggy’s Cove.

I was confused.  There was an open parking area at the junction but no signs to indicate what the parking area was for.  I decided to park the car and go on an exploratory walk when I saw the trails that snaked away from the lot.  There was nothing and no one near us, so I dropped the leashes for the dogs and let them tag along behind me.  A bird seemed to take offence to us walking around and kept up a steady stream of birdy expletives at us as if flew from one rock to another.  I figured there was a nest nearby so I kept a close watch on the dogs to make sure they stayed on the trail and close to me.  There was a thick fog that seemed to hang over the area and through the fog, I eventually saw shapes emerge across water in front of us.  Those shapes coalesced into a lighthouse and the rocks around it.  It really goes to show just how treacherous these waters could be.

When we got back to the car, I considered driving the very short drive to the town that I could just make out through the fog but then thought that we should be able to walk there.  It was a short walk but the lack of any kind of sidewalk or shoulder made it a little scary.  The road is barely two lanes and it has a few bends and rises.  Needless to say, I was quite happy when we made it into town itself.

It is a small town that I suspect now is almost entirely supported by tourism supplemented by fishing.  We walked by signs for boat tours and artisanal shops and restaurants and watched a bus somehow navigate through the throngs of people and badly parked cars.

Finally we came to the main attraction: the lighthouse that we had seen through the fog.  This is supposed to be the most photographed lighthouse in Canada and even with the fog I could see why that was.  We sat on some rocks so the dogs could rest in the heat and have some water.  They soon had a small crowd of their own as people stopped to pet them and get photos.  We sat there for a little while and watched a gentleman with bagpipes play nearby.  Soon though, the the call of the road was louder than the piper and we walked back down the road.  The walk back was no less scary than the walk into town had been.

With the dogs nice and dry and strapped back into their seats, we continued to the south end of New Brunswick to Kejimkujik National Park and National Historic Site.  There are two parts of the park and we went to the larger section that is inland.  A smaller part is on the coast.  There were still lots of spots available and the woman working in the office helped me find a nice spot.  As I was about to leave, she handed me a bundle of poop bags and a garbage bag.  Awesome.  I always have plenty of poop bags handy but being given some is amazing.

Our site was huge and could have easily handled a much larger expedition group.  I set up the tent and took the dogs for a walk along the shore of the lake.  I did let them go for a short swim and drink but they seemed pretty tired so it was a short walk.  Kejimkujik Lake takes up a sizeable part of the park and we were lucky to be almost right on the shore. 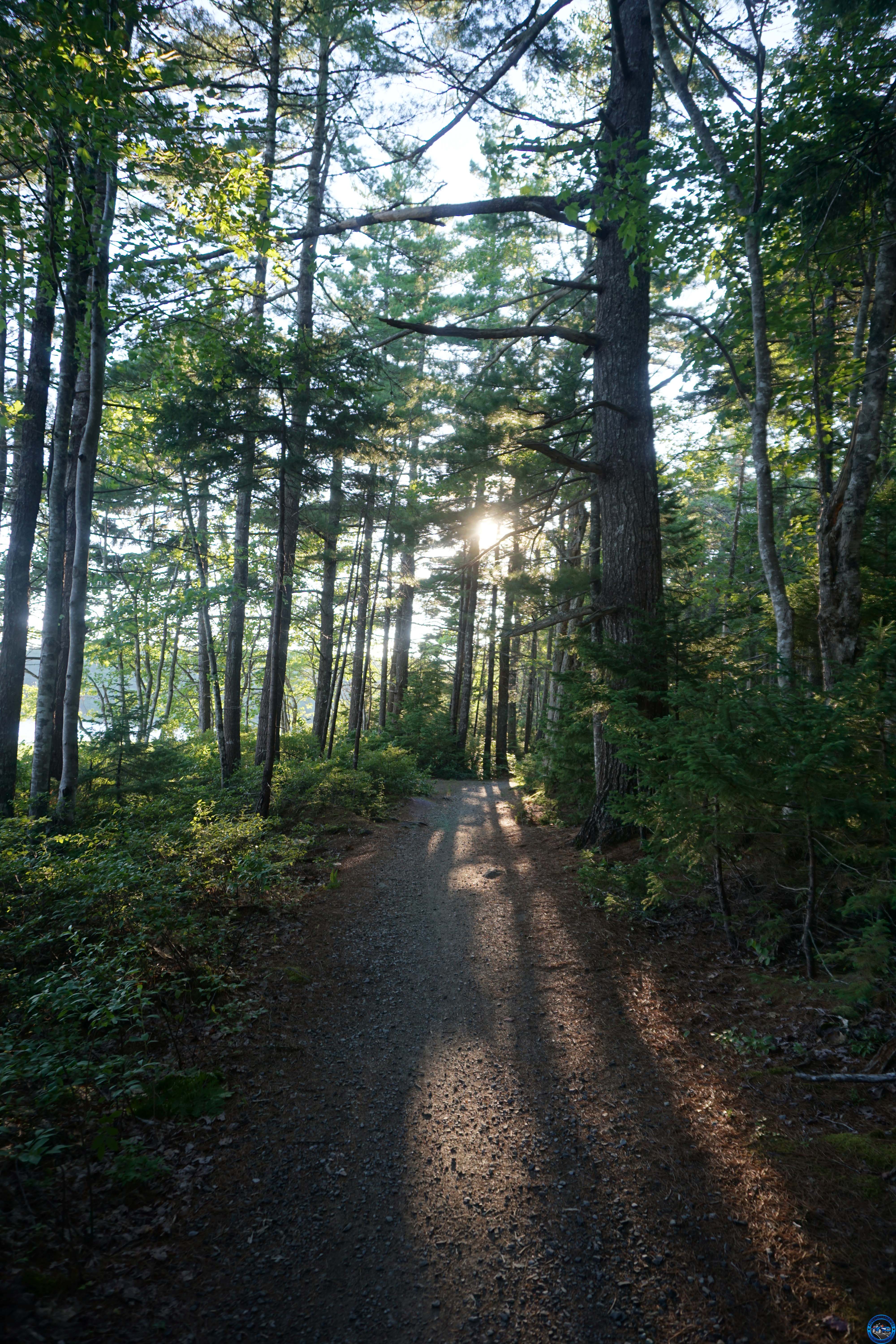 I made another meal of ramen noodles and dehydrated beef and sun-dried tomatoes, washed down with hot chocolate with a splash from the road trip bottle.  Whiskey and hot chocolate is pretty darned good if I do say so myself.

The dogs were content to sprawl out on their blanket until it was time to go into the tent.  Then I had to shove the crush of canine back so I could get to the zippers.  Needless to say, they were out and sawing logs in short order.  I wasn’t too far behind them.

The aptly named Kejimkujik Scenic Drive is the only way to get to the park.

There are more than 500 petroglyphs through the park and you can take the opportunity to sign up for a guided tour.  The trails that we hiked were very easy and some were also suitable for bikes.  There are some nice beaches and since it’s inland, the water gets warmer and is safer for children.  The Seaside part is, well seaside.  Since we didn’t go there, I can’t say what it’s like but I’m sure it’s gorgeous.

There’s not much near the park but there are smaller restaurants out there.