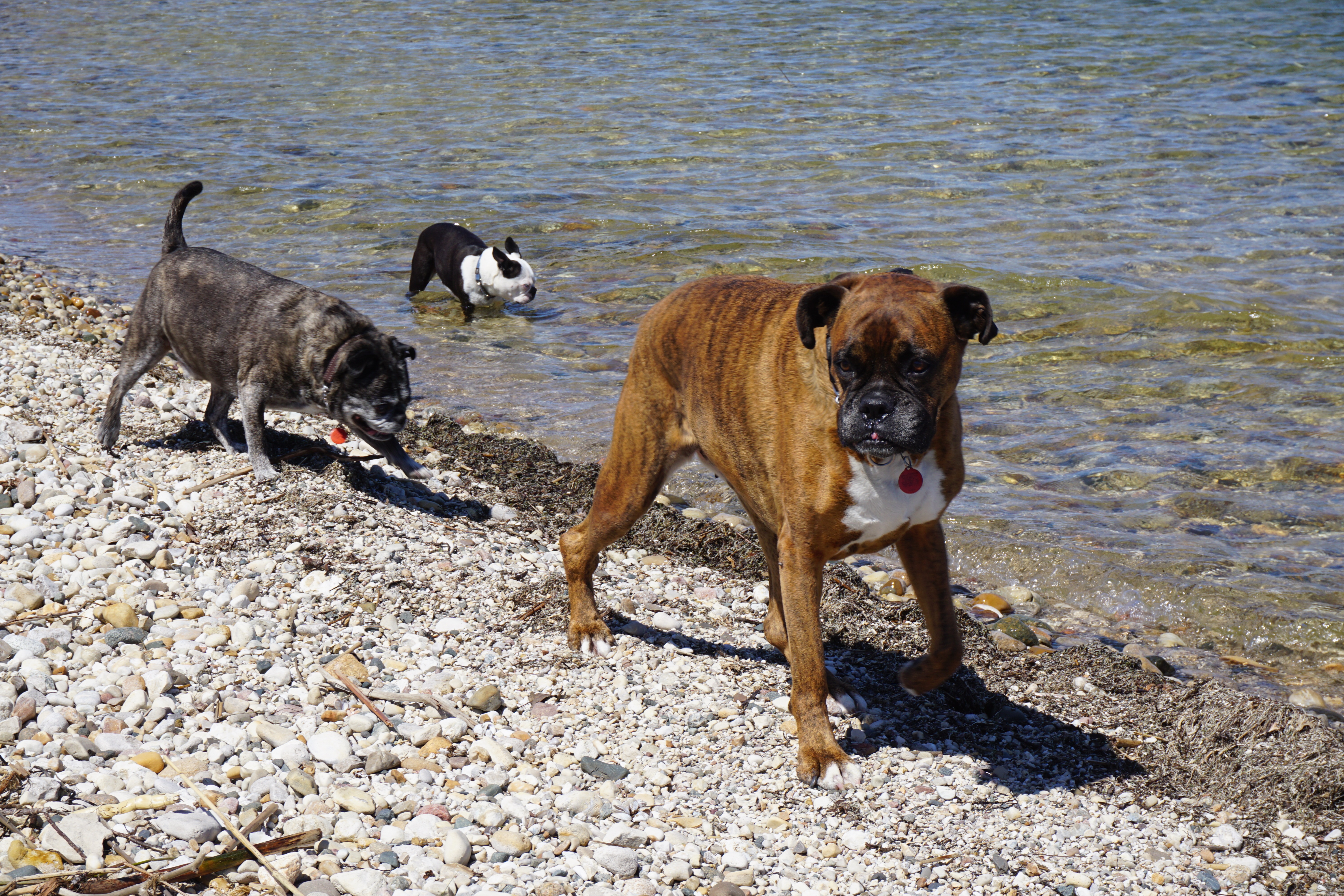 Left to my own devices I will get up at the crack of noon.  For whatever reason, on the second day of our trip, I was up early.  Really early.  I took the opportunity to visit the beach before anyone, or even the sun, was up.  I must admit that it is a really nice time to walk around, even if it is an ungodly hour to be awake.

After the dogs had played in the water and Leo rolled in the sand, we returned to our site and packed up before continuing on.  When we drove into nearby Caseville, I noticed several people walking into The Bluewater Inn so I parked the car and followed in behind them.

All eyes were on me as I walked up to the bar and asked about some breakfast.  Since there was a gentleman at the end of the bar with a plate of eggs and potatoes and several other men with steaming cups of coffee, I didn’t think this was an odd request.  “We don’t serve breakfast but we can fix you something,” was the reply.  I was a little confused until I realized that this was the definition of a local establishment: these weren’t customers ordering coffee.  These were friends meeting before work.

I began to apologize and back out but soon was being met with a barrage of questions about how I want my eggs and are potatoes okay and do I like ham and what kind of toast would I like and here’s a cup of coffee while you wait.  In short order, I was joining in with greeting the rest of the morning crew as they walked inside.  A man and his two children came in for breakfast and like me, they were ushered to a table for their breakfast as well.  A container of food appeared in front of me with a coffee to go and I was back out to the car.  The Bluewater Inn may not be pretty but the hospitality is second to none.

I drove the car around the back and found a picnic table where we could enjoy my breakfast.  Yes we since the dogs had a few bites of the thick-cut ham.  As nice as the breakfast was, the view of the marina behind the Inn was the best part of it.

With full bellies, we continued along the shore of Lake Huron.  We were happily driving when a billboard caught my eye for a business in Bay City.  Oh yes: this was a stop we were going to have to make even though it was not far from Caseville.

My first impression of Bay City was that of an historic city and had I not had three dogs in tow, I would have likely explored more of it.  However, I was on a mission and I soon found my destination: Cops & Doughnuts.  Sutherland Precinct to be exact.  This was the shop that I had wanted Ex Cop Donut Shop in St. Louis to be.  I picked up a few souvenirs on top of a bacon long john and plain doughnut before heading back out to the car.  I was so excited to dig in, I found a step nearby and we took care of the doughnuts before they had a chance to go stale…yeah that’s it.  After gorging myself on fried dough, we went for a short walk to a nearby park.

Fun fact:  The Scottish band, The Bay City Rollers, were named after the city by randomly throwing a dart at a map.

As we started to head out of Bay City, the carb load in my gut was already making me feel a bit drowsy, so we stopped at Adventure Coffee.  I can admit it: we stopped for the name alone although it was a good, strong brew that I bought to help keep me going.

Fun fact:  Bay City was home to the defunct Defoe Shipbuilding Company where ships were built for the United States Navy and Royal Australian Navy.  The USS Edson was brought to Bay City to be a museum ship.

We had been driving for a few hours along the shoreline when I saw a that we were near Hammond Bay State Harbour.  Seeing as the dogs needed to run and I needed to work off some doughnut goodness, we pulled into a parking lot then followed a trail through the trees.  I had not thought that sandals would be a problem but we must have found the one pocket of snow left in the area.  Who knew there would be snow still on the ground on May 5th?  Even when it’s warm out, snow is still cold and I was glad to be back in the sunshine.  I waited until we were far down the abandoned shoreline before unleashing the dogs and they happily bounded into the water and Leo still rolled when he got out before they set off exploring.  They didn’t wander far and were soon crowding around my feet, letting me know they were ready to go back to the car.  Crossing the snow wasn’t any easier the second time but my toes thawed out quickly under the hot air I soon had blasting.  Okay, the snow really wasn’t that bad but the drama sounds entertaining.

I had been trying to follow the Lake Huron Circle Route signs but at times they were few and far between.  Once we arrived in Mackinaw City, where we would leave Lake Huron and begin to follow Lake Michigan, it quickly became obvious that there was no way I could rely on signs to find my way.  I finally pulled off the road and mapped out a route to a town on the shore of Lake Michigan.  I felt like I was cheating or missing parts of it but it would have been impossible to figure out how to get to where I was going and drive at the same time.

After some creative navigating around a Lakeshore Drive that somehow wasn’t really on a lakeshore, we began heading south on M-119.  At first it was just a nice drive with the occasional glimpses of Lake Michigan through the trees.  Then the trees got thicker and the road became smaller and a sign declared that we had entered the Tunnel of Trees.  Normally roads don’t stick out in my mind but this one is worth remembering.  It must be a remarkable drive in the fall when the leaves change colour and it would be a destination of it’s own.

Unfortunately, there weren’t many chances to get out and walk so we didn’t go explore the forest at all and there were few places that would have been safe to stop and take photos.  Pity.  When we did emerge, we drove on until we arrived in Traverse City.  When I saw there was a state park, I thought this would be a good place to spend the night.  That was until I drove through the crowded campground.  The screaming children, barking dogs, and close campsites were not immediately appealing.  Then I checked the weather and noticed the forecast called for rain overnight and into the morning.  Not wanting wet dogs in a wet tent, I decided that we would find somewhere else to sleep.  I was amazed at just how much traffic there was in the city and in the interest of my sanity, did not stop for a walk and did not drive around the city.  When I saw that Traverse City is known for cherry blossoms, it all made sense that so many people would flock to the area to enjoy the display.  Since the city was booked up, we would not be among them.

We rolled in well after 10:00 pm and I was barely able to keep my eyes open as I checked in.  The woman working was very efficient and in no time, I was on my way to my room, with some treats for the dogs.  Well done Best Western for the welcoming gift of cookies and poop bags.

Our room was quite large and very clean.  After the obligatory investigative sniffs, the dogs were soon settled.  Piper lay across the door at first but then once the boys got comfy, I helped her up onto the bed and we all passed out.  It wasn’t until I was drifting off that I realized I hadn’t eaten anything after those doughnuts.  Mmmmmmmm doughnuts.

Miss the first day of this latest adventure?  Click here to get caught up.