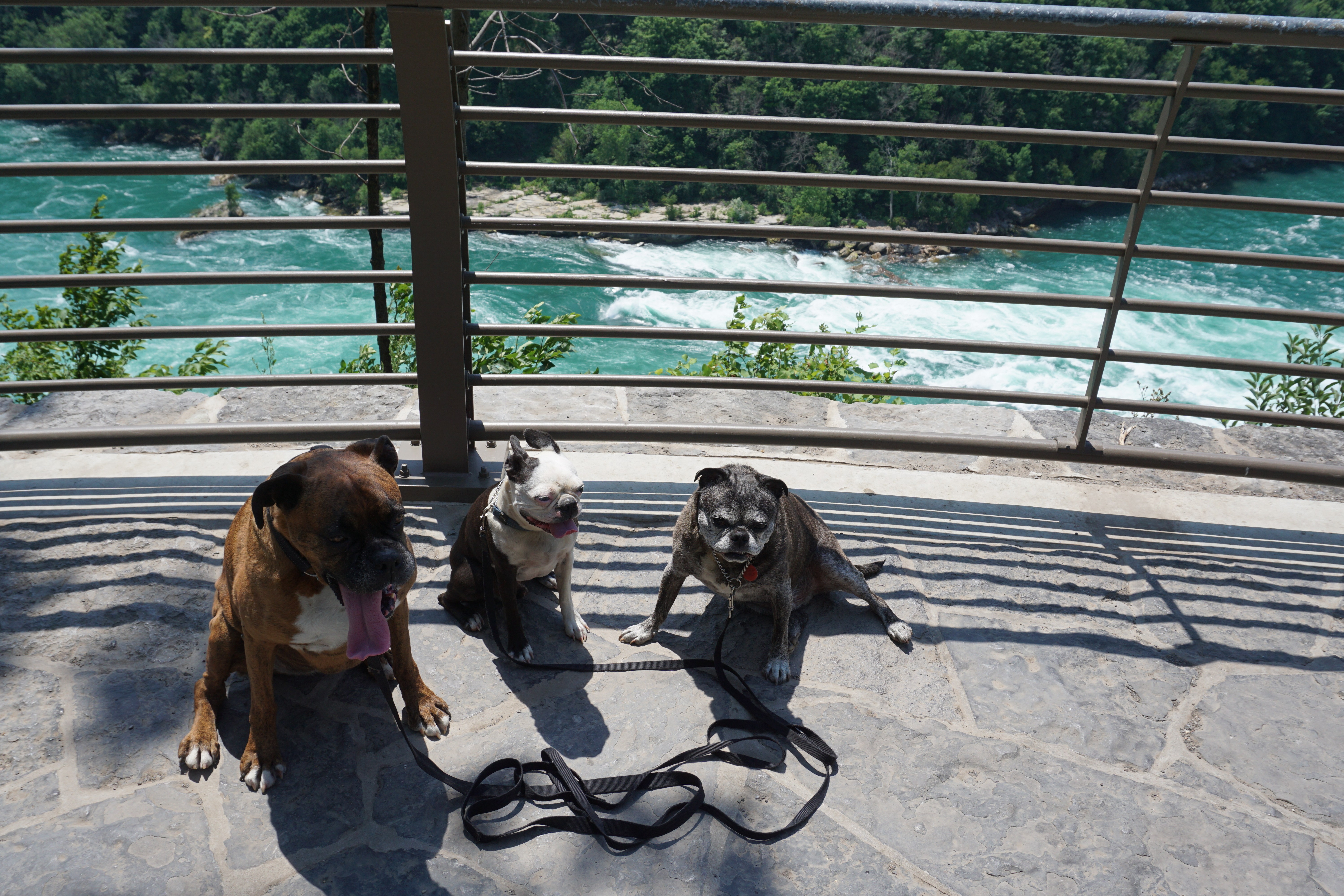 When we emerged from our tent in Evangola State Park, it was already starting to feel warm so naturally we went down to the beach.  To my left, that wall was beckoning so we began to make our way over to investigate.  At first the going was easy along the rocky beach but then the beach stopped and we had to pick our way over rock ledges.  I would have been able to make it over there with no problem.  Almost totally blind Jack and arthritic Piper?  Not so much.  While Leo loves to pretend to be a mountain goat (really he can’t stop himself from climbing), he didn’t want to do it with the waves pushing him around.  So we gave up on exploring the wall along the shore and went back to our site.

Once the tent was packed up we left the campground and continued our trek along the south shore of Lake Erie.  We weren’t trekking long before we stopped at Cala’s Kitchen in Derby.  I scanned the menu and when I saw something called Hungry Helping, well that just leapt off the page at me.  When I received my load of goodness, I asked if there was anywhere that I could sit with my dogs.  Luckily there was a dog park a short distance away in the Town of Evans.

The dog park was next to the city offices.  It was small and had no shade but it would be perfect to let my travelling brood stretch their legs and sniff around; after breakfast of course.  Piper made sure to let me know that she would help me and has developed quite the taste for pancakes with her bacon.  She will stare at me with those big brown eyes then she’ll look at the food, at me, then shifts her front legs a little before repeating the whole sequence.  For the entire meal.  Leo gets so excited that he practically vibrates until something drops.  Jack has taken the exact opposite approach and ignores me.  Jack is actually a brilliant dog and I would have no problem believing that he consciously adapts a reverse psychology approach.

With breakfast out of the way and the dogs done wandering around the park, we drove on.  We were able to find some of the Great Lakes Seaway Trail signs and tried to follow that as much as we could.  It got a bit tricky in Buffalo with the construction season in full swing.

We were driving down Niagara Street when I saw a sign for Resurgence Brewery.  A beer sounded like a perfect idea on a hot day so I pulled into the lot.  I noticed a shady patio outside and thought that this would be a perfect place to sit with the dogs, enjoy a beverage, and that was when I noticed that it was closed.  Oh come on.  With a resigned sigh, I turned around and that was when I noticed Bootleg Bucha.  I like kombucha and if I can’t have local beer, then I will have another local fermented beverage.

I’m not sure if they were under renovation or if the shop normally has a minimalist feel.  Finally I was able to find a staff member and I left with a variety of bottles, most of them heavy in the ginger department.  I figure that with all the food I’ve been consuming, ginger should keep my stomach kind of sort of a little bit happy.  On the plus side, I would be able to enjoy my drink in the car so we could get a little farther down the road and we could continue to enjoy the air conditioning.

We were able to navigate our way through construction and detours to the Niagara Scenic Parkway and if you are ever in the area, it is a beautiful drive.  I’ve never given the area much thought other than going to see Niagara Falls and that is a shame.

As we drove closer to Niagara Falls, we saw more places to stop.  An unfortunate side effect was that there were more people around and some of the parking lots were full.  We were finally able to park near the Niagara Gorge and stepped out into a good bit of shade under some tall trees.  The day had turned into another scorcher and after a few photos by the gorge, making friends with a tour group, and water in the shade, the dogs were happy to climb back into the car.  There are trails that do go down to the Niagara River but today was just not the day to try it.

Fun fact: part of the Niagara Scenic Parkway was decommissioned and is now a paved trail by bicycles.  What a terrific way to view the river.

Since we weren’t able to swim in the Niagara River, when I saw a parking area next to a bridge, you know we hopped out.  A sign proclaimed that we were on the east branch of Twelve Mile Creek but all I cared about was the trail next to the river and water that was relatively clean.  Leo and Jack waded in a little then ran the trail as Piper followed beside us in the water.  As much as I would have liked to spend the next few hours following the river, we had some distance to cover so we returned to the car and continued on.

We were now driving the south shore of Lake Ontario and had entered an area thick with cherry farms so I decided to stop at Singer Farm Naturals.  I did grab a small bag of cherries that I knew I would be able to finish before we crossed the border and a cherry spritzer to go.  I’ll admit that the drink was gone in no time and the cherries didn’t last much longer.

Since it was such a hot day, camping was going to be out of the question again.  I was able to find a room at the Red Roof Inn in Rochester that luckily had a good pizza place down the road.  We got checked in, then went down to Fire Crust Pizza.  If you go, and you should, have everything figured out before you step up to the counter because your pizza gets made right there and it’s done in no time.  You pick your toppings (and there are a lot to choose from), and your pizza gets fired in mere minutes.  It was still screaming hot by the time we got back to the hotel.

The dogs made themselves comfortable and were asleep as soon as I finished eating.  Of course they stayed awake just long enough to make sure that they didn’t miss out on sharing.

Did you miss the start of this part of our Great Lakes adventure?  Start from the beginning here.

Or read more about the very beginning when we started around Lake Huron.