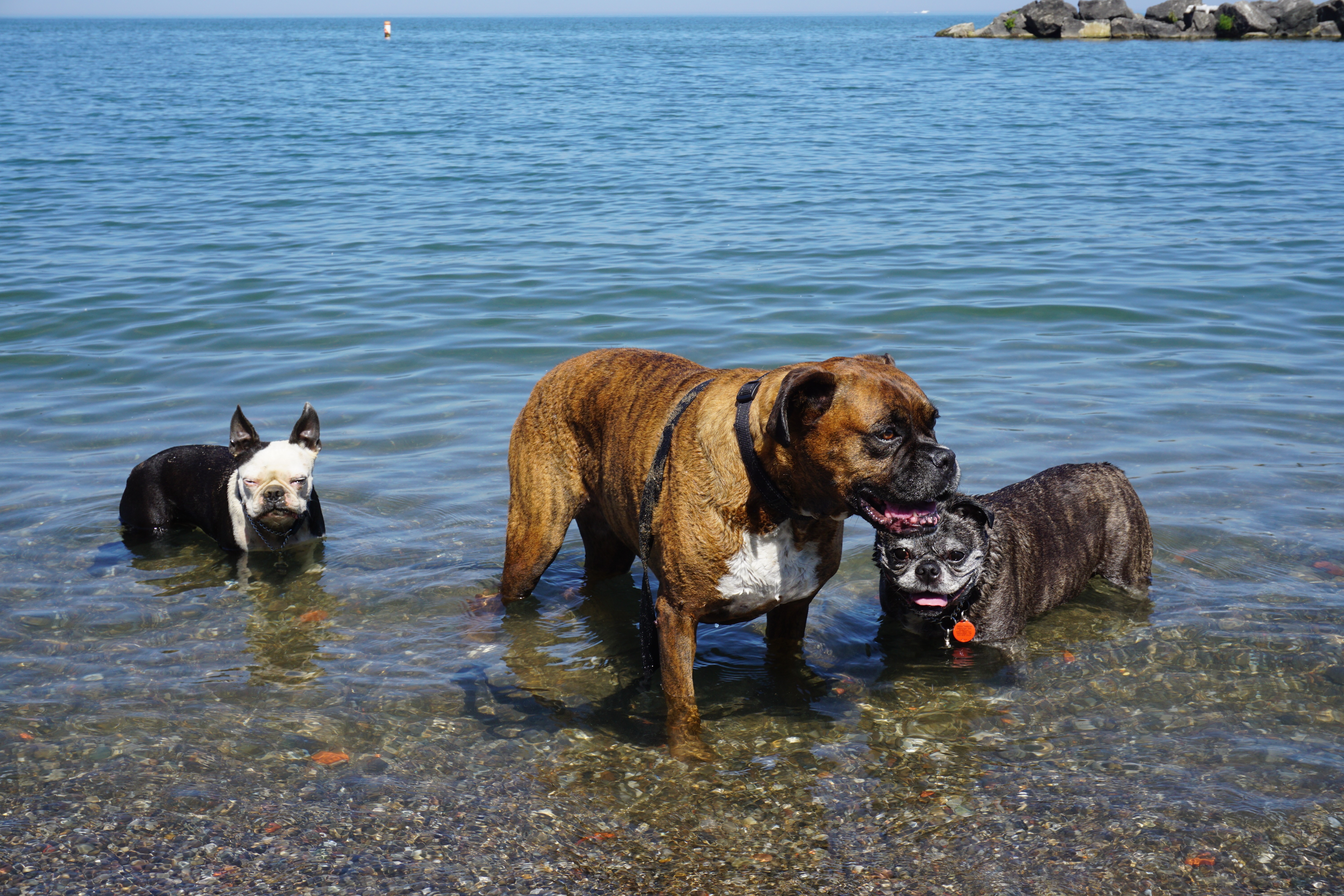 We were in no rush to get going and the dogs were content to let me pack up while they stayed in bed.  Jack will actually flop over if I try to help him out of bed and become dead weight until I lift him down to the floor.  Then he rolls over and wags his way to his feet.  Making full use of the hotel wifi, I decided to try La Crepe Bakery & Cafe in Berea Commons.  It wasn’t too far from the hotel and a civilized start to the day is always welcome.

This was one of the times that my phone failed me.  I was following the directions and for some reason it directed me to the parking lot of a retirement home with nary a crepe in sight.  Had I been less stubborn, I would have abandoned the plan for breakfast and gone somewhere else.  No; I wanted crepes for breakfast and I was going to have crepes for breakfast.  Rather than aimlessly drive around, I hopped out quickly and walked around a few buildings.  It turns out La Crepe was in an adjacent building.  Thanks a lot map.  It’s not the worst misdirection I’ve ever had but when you’re hungry and almost entering a decaffeinated state, it’s a real irritation.  I parked the car at the front of La Crepe and as I walked in I noted that there were some bistro tables on the sidewalk which looked like a promising place to eat with the dogs.

After staring at the menu for a while, I ordered the staff-recommended brie and strawberry crepe.  It seemed like an odd combination but I like every part of it.  Even better was the fact that the dogs would indeed be able to join me at one of the tables.  I fixed my americano then brought the dogs out of the car to wait for breakfast.  Luckily most of the area was in shade because it was shaping up to be another hot day.  One of the staff brought my crepe out to the table and was greeted with excited butt wiggles.  I’d like to think it’s because they like people and not because of the tray in her hands.

The combination of brie and strawberry was a little unusual to my taste and at first I wasn’t sure I liked it, but with each bite I wanted another and soon the plate was empty.  The dogs have never met a cheese that they didn’t like so they had tiny bits of brie which they enjoyed as well.

As delicious as breakfast was, I felt like I needed another coffee soon after we left La Crepe and as I was browsing coffee shops, I saw Six Shooter Coffee; the name alone demands investigation.

We drove into what was called the Waterloo Arts District of Cleveland and as we navigated the streets, I couldn’t shake the feeling that there was something about the area that seemed familiar.  Kind of artsy, kind of historic, kind of eclectic.  There was a bike club set up near the front of the cafe and that was when it hit me: it was like Parkdale or the Junction back in Toronto.

I tied the dogs to a tree out front of Six Shooter and stepped inside.  Somehow I knew I would love it and I did.  The ambience was warm and funky and so much better than those major chain coffee places, especially that big one from Seattle (who know who I mean) or the one named after a dead hockey player (every Canadian knows that one).  In the mood for something a little different, I asked the staff what they are known for.  Spiced Iced Coconut Latte was the answer.  Yes.  I will have one of those please.  One sip and I was hooked.  It was a battle between savouring it for as long as possible and sucking it back in one gulp with the inevitable brain freeze be damned.

When I stepped out of the shop, I saw that the dogs had made friends while I was away: one woman from the bike club sheepishly asked if it had been alright that she was petting them.  I understand why people ask and I really appreciate it; however those little eyes will look at you with such heart-melting hurt if you don’t pay attention to them, that I understand why people do it anyway.

They hopped back into the car and we drove on.  We hadn’t been driving long (I was sucking the last of the latte off the ice) when I saw signs for Euclid Creek Reservation and Euclid Beach.  Where there’s a beach, there’s water and my little ones could certainly use a swim.  The first thing I noticed as we walked down to the water was just how clean the beach was.  It was pristine.  It was all I could do to walk them to the water without getting tangled in leashes, especially with Leo rolling his way down.  As there were people around, I couldn’t let them off-leash but the dogs didn’t seem to mind that much.

There were a few people that took a shining to the dogs and we ended up chatting for a bit.  They couldn’t believe that I had three dogs that loved the water so much and enjoyed watching them swim.  When I told them we were from Ontario they wished me Happy Canada Day.  Holy crap.  Total face palm.  I’m such a bad Canadian to not be in my own country during it’s celebration.  Well it was a little late now.

Fun fact: There is a phenomena know as the Lake Erie Mirage Effect where people report being able to see the Canadian shoreline as though it is immediately off the south shore, even though Canada is 80 kilometres (50 miles) from Cleveland.

With the dogs cooled off, we climbed back into the car.  As we were driving east along Lakeshore Boulevard, I saw a road sign for Boulevard of 500 Flags.  I needed to see what this was about.  As you turn off the road, there are rows of flags on either side of the driveway and then you round a corner and there are more flags as well as a 9-11 memorial and Olympic Flame Eternal Torch.  Normally you expect this kind of memorial to be in major cities so this was a very humbling surprise and I found it to be a place that encouraged reflection, especially when I noticed that most of the flag poles had small tags attached with the name of a veteran.  There are no photos of the dogs here because this is a place for the veterans and their sacrifice.  A short distance down the road, is the War Dog Memorial, built to honour all the dogs that served as well and is attached to a dog park.  Well done Eastlake, Ohio. 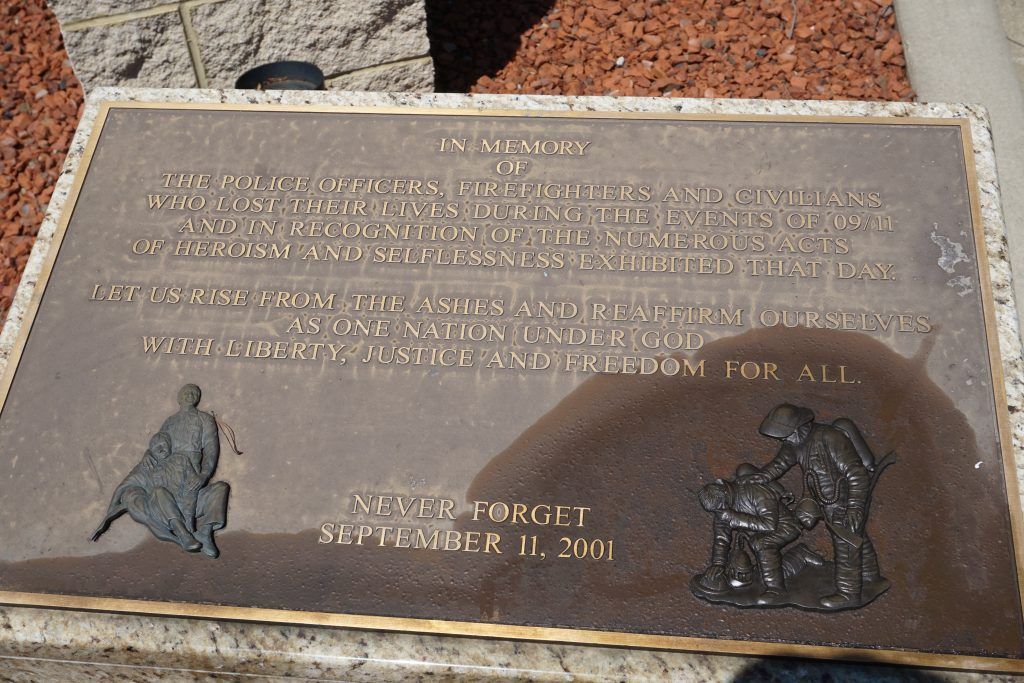 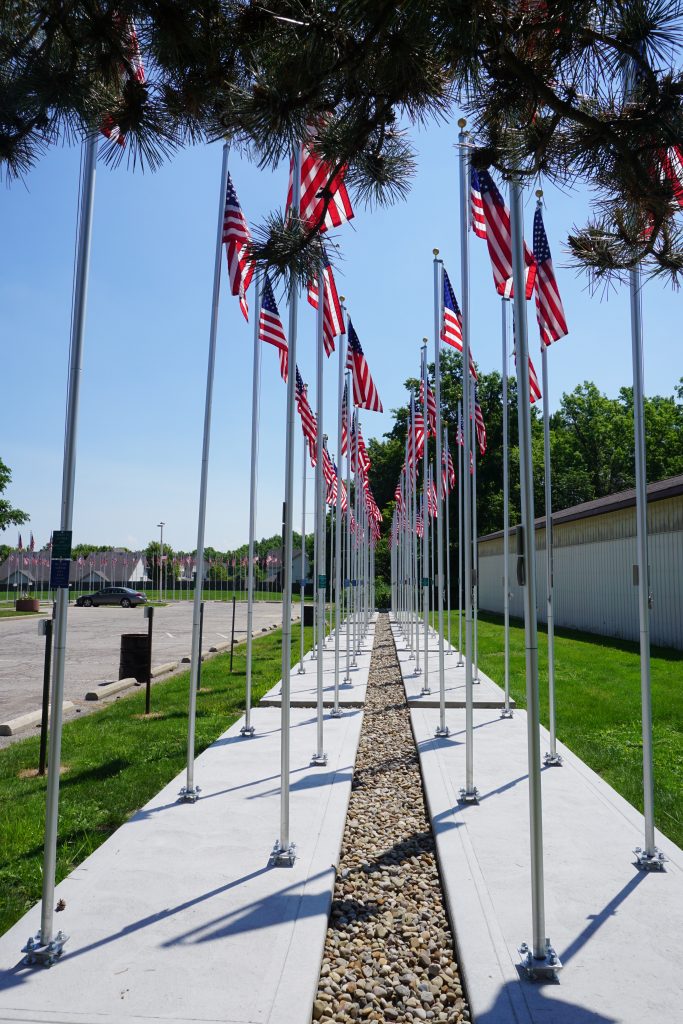 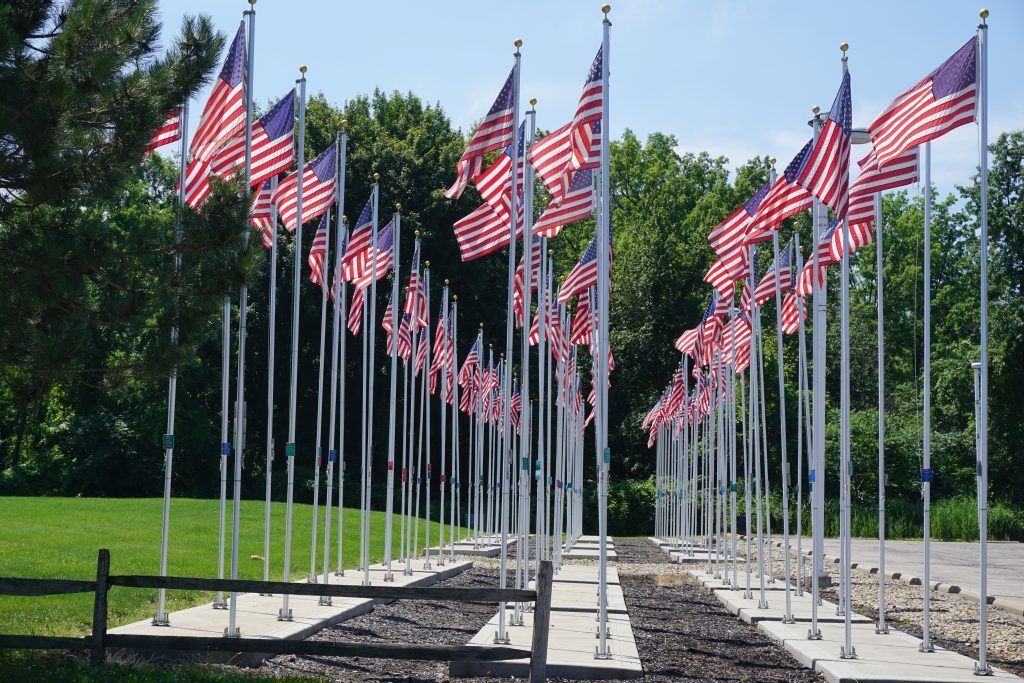 As we continued along the shore, the sun was getting a bit lower and my tummy was getting noisy so it was time to start looking for a place to eat and we certainly found it at Breakwall BBQ.  First of all, it’s barbecue and how do you go wrong with barbecue?  Second, it’s next to a marina and right on the water.  After a hot day of travel, that is all you need in life.  I walked up and had to ask around a bit to find out of if the dogs would be allowed on the patio with me.  After bouncing from person to person, I was told that they would be able to join me so I went to retrieve the little ones and I found a table with a good bit of shade.  I got some strange looks as I practically crawled on the concrete checking to make sure that it wasn’t too hot for them before pouring out some water.  Then I waited.  And waited.  And waited some more.  Finally someone noticed me sitting there and dropped a menu and some water on the table before leaving again.  When she (finally) returned, I put in an order for a Phat Chick and a local Nano beer to wash it down.  Yes I would like fries with that please.  When my food came, I was faced with a grilled chicken breast topped with pulled pork, cheddar cheese, coleslaw, and barbecue sauce on a toasted bun.  It was pretty darned good. The Nano was a perfect beer to accompany it as well.  We sat and enjoyed the view for a little while before heading back out on the road to find a place to stay the night. 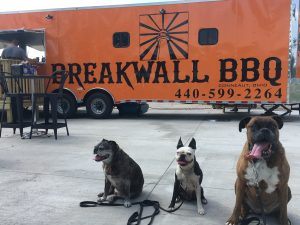 We ended up driving clear through Pennsylvania and into New York state.  I was starting to get a little nervous that we wouldn’t find anything before dark.  Then we found Evangola State Park.  There were a few sites available and the staff helped me find one with the most privacy.  She did mention that they only allow two dogs but if mine were good, it wouldn’t be a problem.  I didn’t realize how important that off-handed comment would be later on.

Evangola State Park is not the park that I would usually choose to stay in.  The tent area was basically an open field with nothing between sites.  Fortunately our site was on the outer edge of the field which did give us some cover.  Also, vehicles are not parked on the site but supposed to be left in a lot.  Not having my car on the site didn’t bother me as much as seeing other people with their cars right in the middle of their site and three sites down from the parking lot.  Oh I see the rules are only for some people.

What the park lacked on sites, it made up for with location.  We were still on Lake Erie and with the campground elevated over the water, we were able to get quite a view.  Needless to say, we went down to the beach for an even better view.  There was a narrow trail that wound over a small gully and down to the shore.  Silly me, I had thought we would just pop down for a little stroll and left my good camera at the site.  After taking some photos with my phone that were not quite up to par, we went back to the site and got my camera to really make the most of the scenery.  I was intrigued by what looked like a fortress wall down the shore but it was just too late to try and climb over to it so we sat on the beach and watched the sun go down.  Well not all the way down; we still had a trail to navigate back up to our site. 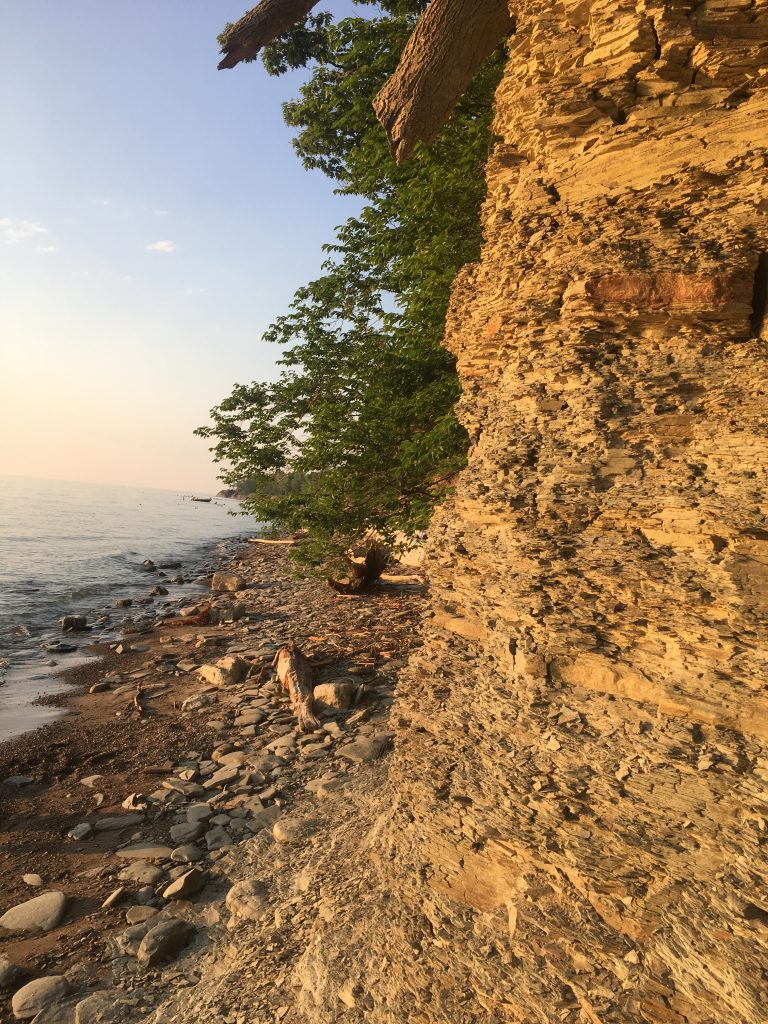 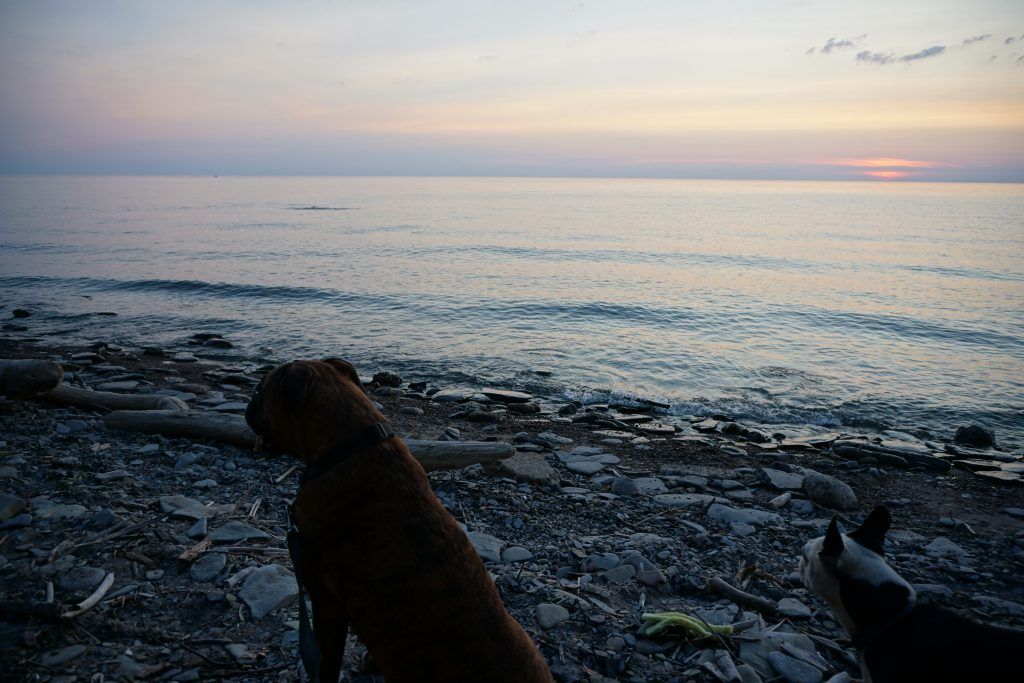 The dogs happily piled into the tent and were snoring away before I had even wiggled into my sleeping bag.

Go back in time a few days here to read about the first day of our trip around Lake Erie.  Or go back even farther to read about when we set off on the first leg of our Great Lakes vacation.